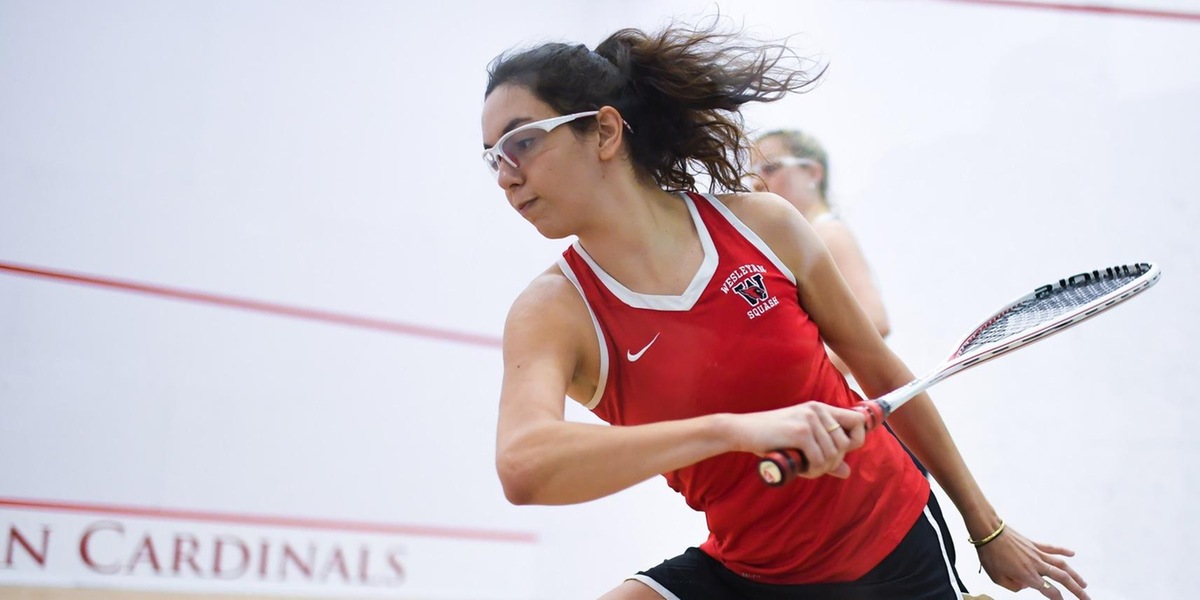 Wesleyan squash has soared to new heights over an action-packed winter break. There is no better place to begin than winter training, where the team faced two grueling two-hour training sessions a day. Beyond the court, the teams got closer than ever.

“It’s great to be able to spend time just with the team over winter training and I feel like we all got a lot closer,” Carly Blue ’22 said. “Especially traveling together and staying in hotels gives the team a great opportunity to form close friendships.”

All of the time spent together has translated to their play on the court. The women’s squash team has been on a rampage as of late, going 5–1 since the New Year. They are also in the midst of a four-game winning streak, where they have gone a combined 34–2. In other words, complete dominance.

Starting off the winter break circuit against a strong Colby team, the Cardinals set a good tone for the year with a commanding 7–2 victory. After the top of the ladder sustained defeats, the Cards flew past the Mules to secure the win.

After a tough 7–2 loss to Franklin and Marshall College that saw the Cards fight to the end, the Red Birds went undefeated for the rest of the break.

The Red and Black were out to avenge their uncharacteristic loss. In their next game against Haverford College, the Cards rolled to a cool 9–0 victory. The Red and Black’s entire ladder swept their competition in a truly lopsided affair.

Next up was the Pioneer Valley Invitational, a ‘CAC competition which took place on the weekend of  January 24. The first matchup for the fearless Cardinals was against Connecticut rival, Conn. College. The Cards have played a series of close matchups against the Camels over the past few seasons, but this time, the Cardinals got over the hump and swept the Camels. Aditi Prasad ’21 started the Red and Black out on a strong note with a 3–0 win. Other sweeps came from Josephine Russ ’20, Natasha Feenstra ’21, Nina Premutico ’20, Annie Roach ’22 and Emma Smith ’22. Overall, it was a very successful start to the competition—but there was still plenty of work to do.

The following contest was a matchup against Mount Holyoke College. After Prasad fell from the top of the ladder, the Cardinals once again showed their strength top-to-bottom by sweeping the rest of the games. Not one of the other members of the Red and Black gave up more than six points in any of their games. It was another commanding performance for a team that is getting used to victories.

Next on their schedule was Hamilton. Last season, the Red and Black won both of their performances in close 5–4 and 6–3 matches. This time, however, it was an assertive win for the Cards. The Cardinals dominated at the top and bottom of the ladder, winning in the 1–4 and 6–9 spots. Once again, it was sweep city for Wesleyan, as they claimed wins in seven matches, ending the tournament on a resounding note.

“Beating the Hamilton number one [player] 3–0 was pretty memorable, as she is definitely a strong opponent to face, and I expected the match to last longer,” Prasad said.

This sentiment was echoed around the team.

“It’s been really fun to get some wins over NESCACs, especially Conn. College and Hamilton because there’s a bit of a rivalry there,” Blue said.

Aside from the women’s dominance, the men’s team also had a successful break.

After a tough start against Colby and Franklin and Marshall, the men’s team responded with resounding victories against Haverford, the University of Chicago, and Northeastern University, all in one weekend. After dispatching Haverford and UChicago, the Cards battled Northeastern in a tight 5-4 match.

At the Pioneer Valley Invitational, the Cardinals capitalized on their momentum early in the first matchup against Conn. College. Sean Choi ’21 and John Sutherby ’23 delivered massive victories. Choi fought in a five-game thriller, while Sutherby battled for every point.

Despite losing in the middle of the ladder, Wes punched back and won in the 7–9 slots. Brinton Thomas ’23 won in a five-game marathon. Next came a commanding victory, 8–1, against Denison College, all leading to the men’s last match of the weekend.

The men’s team faced off against Hamilton in a NESCAC rivalry in the final match of the weekend. However, the Cards were not able to best the Continentals. Despite the tough loss, Sutherby delivered a memorable performance.

“John Sutherby on the men’s squash team played fantastic squash on Saturday evening when he went up against the Hamilton men’s number two,” Prasad said. “John was match ball down and came back to win the match in a thrilling five-game match, which was for sure the comeback of this season for Wesleyan squash.”

It was a successful beginning to the decade for both the women’s and men’s teams.

“In my opinion, this years women’s squash team is the strongest it’s been since I’ve been at Wesleyan,” Prasad said. “Although we’ve always been a top 20 team, I truly believe this year we can improve our ranking and move up a couple of ranking spots. Each member of this team is very dedicated to the sport and shows immense discipline and true team spirit, which are all essential qualities in making a strong team.”

Moving forward to the Little Three Championship, the women’s team has the potential to continue their dominance in the ‘CAC, while the men’s team searches for a statement win.

“I’m very optimistic about our upcoming matches. Amherst and Williams are historically very strong teams, but we’ve been playing really well this season and I think we can really challenge them,” Blue said.

Big games await the women’s and men’s teams on Sunday, February 2 at Amherst, as the Cardinals look to fly to new heights.