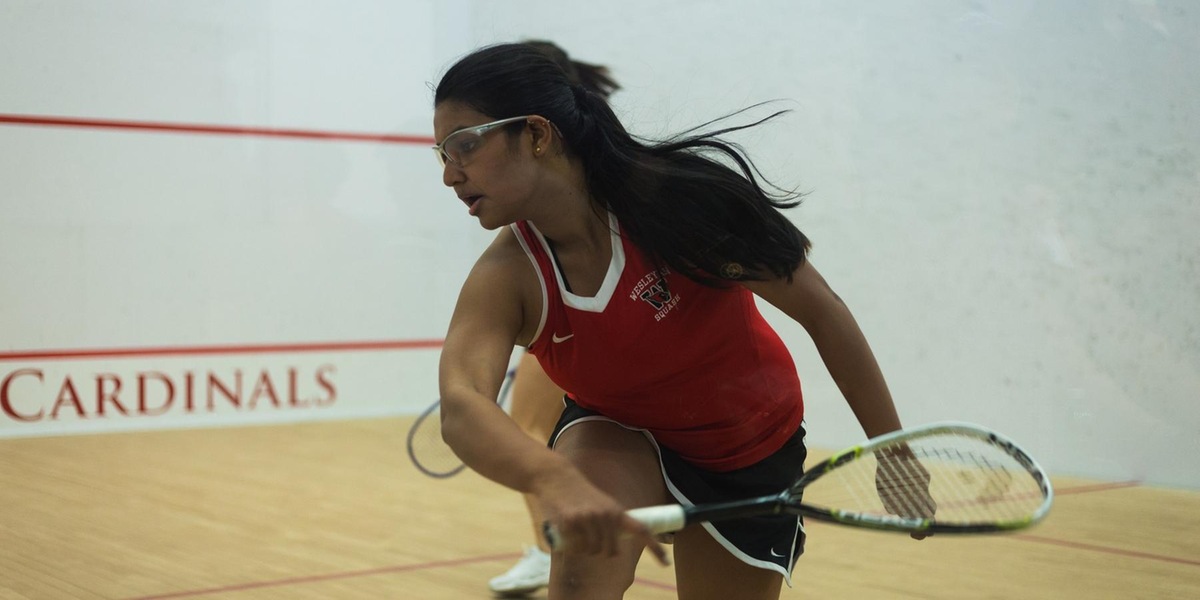 Cardinal squash returned to the court just before Thanksgiving in the hopes of picking up some wins before their December competition. While the men’s team was unable to capitalize against yet another NESCAC foe, women’s squash had victories in two of their three matchups, taking down St. Lawrence University and Bowdoin while falling to the University of Virginia (UVA).

Women’s squash began their first competition of the weekend with a stacked Saturday: matchups against both St. Lawrence and Virginia.

The action began with 27th-ranked St. Lawrence, an intimidating opponent that appeared evenly matched with Wesleyan’s 21st-ranked team. Yet the Cardinals shattered the standings and fought to an impressive 8–1 win. No. 3. Josie Russ ’20 swept her opponent in just three games, dominating each set with an 11–4, 11–5, 11–3 final score. Wesleyan’s top two slots fought a little longer for their victories; No. 2 Ananya Vir ’21 won in four games, while No. 1 Aditi Prasad ’21 claimed a win after five close games.

Coming off the high of beating St. Lawrence, our fearless Cardinals then faced the daunting task of playing their second game of the day, this time against powerhouse squash school UVA. The Cavaliers came in ranked No. 13 in the nation and they showed why on Saturday against a tired Cards team. UVA swept the day winning in all eight matches which they participated in. The only member of the Red and Black able to advance beyond three games was Vir, who fought hard, but ended up falling in four matches.

While this one-sided affair seems like a step backwards for the Cardinals, context is everything. Playing two matches in one day is a trying task, and perhaps more importantly, going toe-to-toe against a strong opponent like UVA gave the Cardinals the tune up they needed heading into their final match of the weekend.

On Sunday, the Cards played their most important match of the weekend, a matinee game against Bowdoin. Wesleyan brought the heat against the Polar Bears, keeping them out of their natural element all day. The Cards had a strong day throughout the ladder winning 8–1, and flashing their great potential in this important game. Prasad and Vir set the tone as they have done many times throughout their Wesleyan careers with victories in the No. 1 and No. 2 spots in the ladder respectively.

However, what had the Cardinals over Bowdoin was their depth. The No. 6 through No. 10 spots on the ladder all swept their opponents. Annie Roach ’22 and Emma Smith ’22 both annihilated their opponents, only conceding four points through their two matches.

The tightest match of the afternoon came from Nina Premutico ’20. Premutico took her opponent to five games before winning the day with a confident 11-7 victory in the fifth game.

“Nina’s match against Bowdoin was really fun to watch because they were close 5 game matches,” Carly Blue ’22 said. “She really fought for that win.”

The match against Bowdoin was made even more impressive by the grueling schedule the Cardinals have faced. The Red and Black demonstrated tremendous focus in continuing to battle through all three matches.

“I think with our matches last weekend everyone really stepped on the court ready to win every point,” Blue said. “Everyone hustled to every single ball, and I think that really showed.”

While the women’s team was able to rise and rally against Bowdoin on Sunday, the men’s team fell to an upsetting 9–0 loss in their Polar Bear play.

Bowdoin came into the match ranked only four slots above Wesleyan, but heavily dominated in nearly every matchup of the day.

“It was tough for the second batch of players going on against Bowdoin because we weren’t able to get the start we wanted to,” Choi said. “Losing the first three matches going in makes it tough for the team to bounce back as our opponents are pushing to get two more wins while the pressure grew on my teammates to push out five wins.

In the latter half of the competition, No. 6 Andrew Doucette ’23 put up a fight against his Bowdoin matchup, falling in the first game 14-12, yet ultimately was defeated in just three games.

“Making sure we maintain positive and optimistic energy will be crucial moving forwards,” Choi said.

The Red and Black look ahead to another difficult weekend. Both squads will face off in the Wesleyan Round Robin, when they will have three matches on Saturday, Dec. 7 alone. After this weekend’s matchups, they’ll enjoy a well-deserved break before the grind of winter training begins.

“While winter break for us only is around 2 and a half weeks, it is important that we keep up with the conditioning we have done so far,” Choi said. “[Our biggest goal] for us is to capitalize on the rest but do as much conditioning as possible as we have a hectic schedule coming up as soon as we get back on campus.”

The Cardinals will fly back to campus to continue their season the second week of January, the beginning of a long stretch of competition that will hopefully take them to the Championships come spring.