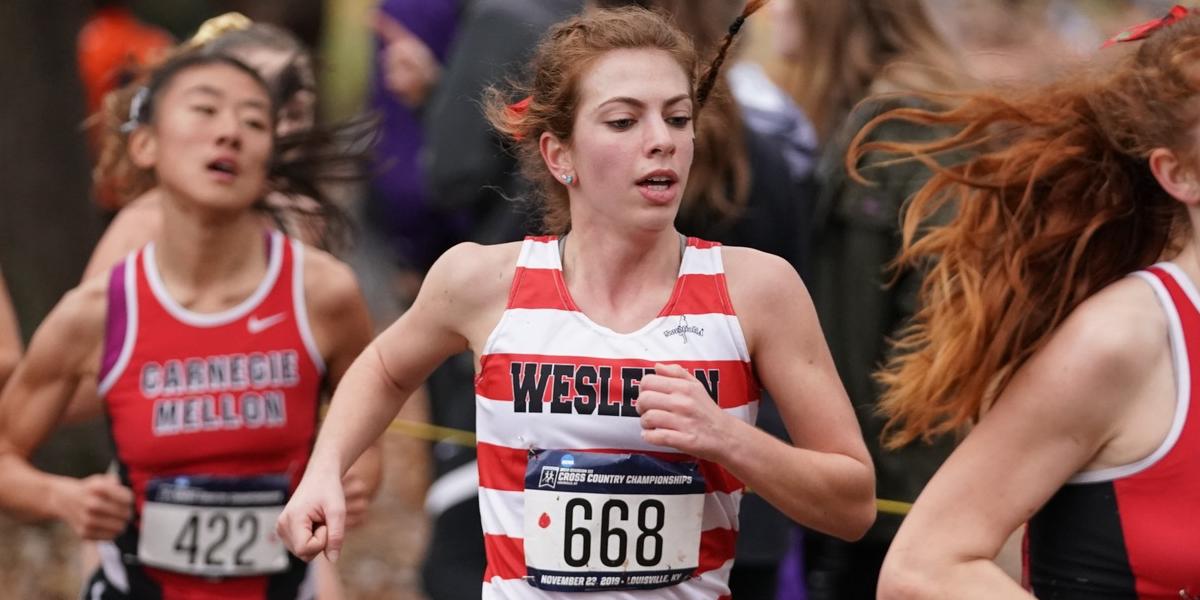 The women’s cross country team concluded an outstanding season on Saturday, Nov. 23, when it competed in the 2019 NCAA Division III Cross Country Championships in Louisville, Ky. It was the first time that the Cardinals had earned an at-large bid to the championships since the current seniors joined the team in 2016.

The Cardinals earned the bid from their successful performance at the NCAA New England Regional, when Wesleyan placed sixth out of 54 teams. This historic moment for the Red and Black was much anticipated, and the women proved their fitness, strength, and determination during the race. The 6K course spanned Tom Sawyer State Park.

Finding out about the at-large bids was a huge moment for the team. Sara Pinsonault ’20 recalled it as her favorite memory of the season.

“The best thing ever was running to find my teammates in the library on Sunday after the at-large bids for Nationals were announced,” Pinsonault said. “I’m extremely thankful that I got to end my senior year of cross country at the National meet with all my friends.”

At Nationals, the Cardinals placed 23rd out of 32 teams, an impressive feat given the youth of the team and their status as an at-large team. Johns Hopkins University won the NCAA Title with a total of just 125 points and an average time of 22:07. At 23rd place, the Red and Black had an average time of 23:16 and recorded 569 points.

Instead of putting pressure on national competition all season, the team had a calm and focused approach to competing.

“We tried not to put all of the emphasis of the season on Nationals,” Pinsonault said. “We saw Nationals as a reward rather than a goal, and I think that really helped the team.”

Becky Lopez-Anido ’21 was the first across the finish line for Wesleyan, coming in 113th out of the 277 runners who completed the course. She zipped across the course with an efficient time of 22:58.1, averaging 6:09.6 minutes per mile. She picked up her speed in the last 2K of the race and managed to move up 40 spots, showing incredible endurance and motivation. Lopez-Anido has had an exceptionally successful third season as a Cardinal, which started with her huge win at the Little Three Championship on Sept. 14 and has remained solid through the fall semester.

Lopez-Anido felt immediately at ease going into the race.

“[Competing at Nationals] was an experience like no other,” Lopez-Anido said. “Kentucky looks like New Jersey, which is where my boyfriend is from, so I instantly had good vibes. It was a totally new place but felt familiar, which made it feel like another race than a huge event.”

Pinsonault followed closed behind Lopez-Anido as the second Cardinal to finish the 6K. She ends her Wesleyan cross country career with another accomplished performance, one of many that have characterized her senior season.

“The buildup before Nationals was pretty cool,” Pinsonault said. “I hadn’t flown on a plane since high school, and there was a big banquet for all the athletes the night before. However, on race day, the people at the front of the pack who we were racing with were mostly from the New England region so it was just another race when it came down to it. The only difference between any other race and Nationals is the density of the pack since everyone is around a similar skill level. Within a five-second gap, there would be over 20 people, which was crazy!”

The other scorers for the Cardinals were first-years Mariah Saunders, Sara Greene, and Jane Hollander. These young athletes all performed with intensity and grit, registering times of 23:18.2, 23:23.3, and 23:38.3, respectively. Saunders passed 31 runners in the final 2K stretch of the race, much like Lopez-Anido’s final sprint.

The team’s historic results make sense given their approach to running and team culture. The women consistently stress that their goals are to not only become stronger and faster through tireless training but also to foster a team dynamic that promotes a culture of engagement, motivation, kindness, and support.

“I can genuinely say I’m friends with every girl on the team,” said Lopez-Anido. “[We have so much] support and love for each other.”

These values have made the women’s cross country team incredibly successful, along with the addition of the nine first years who have strengthened throughout the course of the season and are now integral members of the squad.

“Running alongside my beautiful friends [was the highlight of the season],” Lopez-Anido said. “They are my second family. I often run with Sara and it’s great to have her to run with.”

“I also love running with Becky and am thankful that in my last race with her we got to run side by side,” Pinsonault said.

Many of the women will continue to run throughout the winter and spring in the indoor and outdoor track seasons, giving them opportunities to hone their skills and become even faster, stronger, and more determined as the year continues.