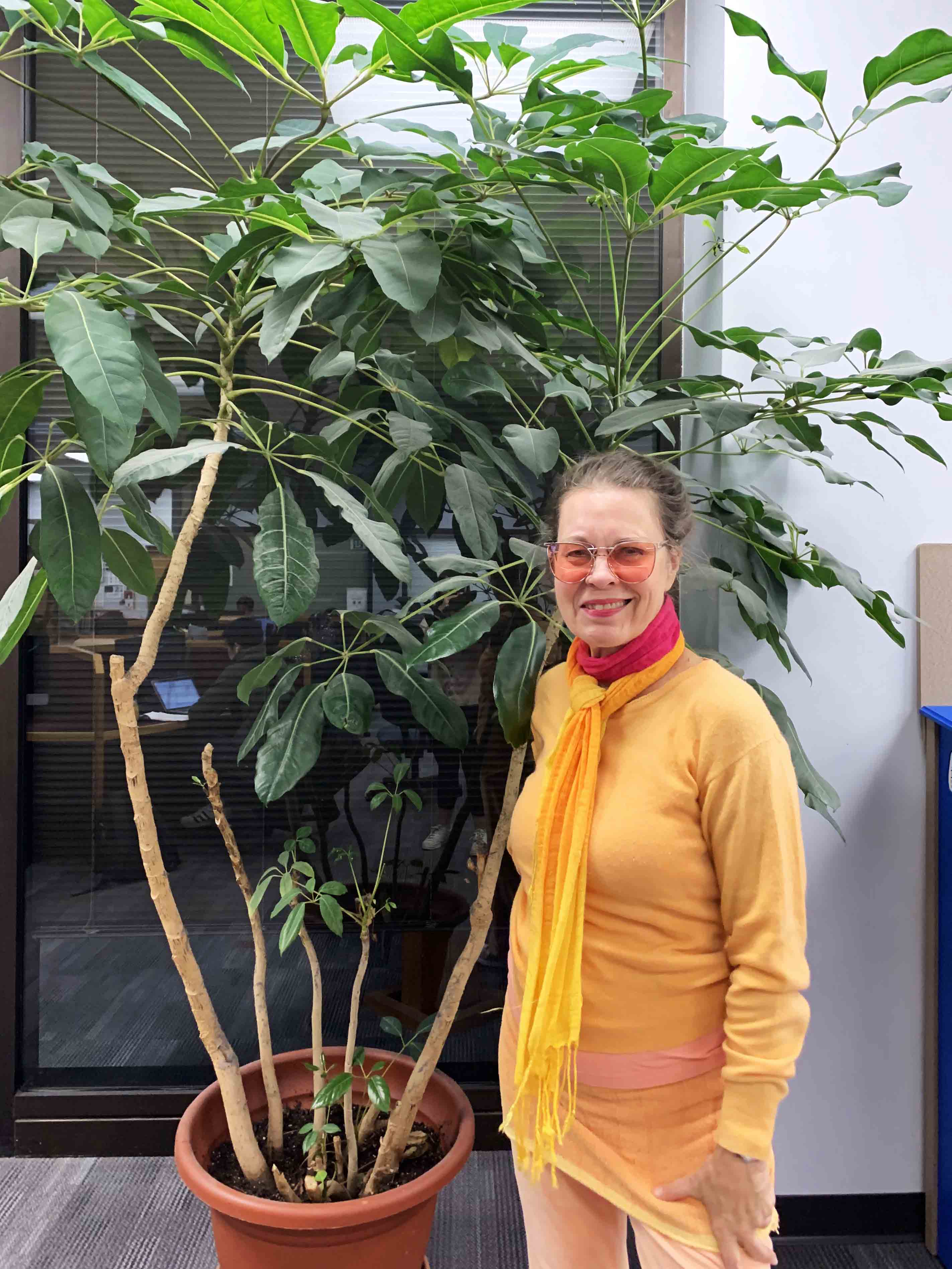 It was a Friday afternoon, and I was sitting in SciLi, hoping to get some work done before the weekend. I looked up from my laptop to see a woman walking around in a green apron with a watering can, tending to the various plants in the library. I was curious if this was a routine thing, but before I could ask, she had made her way out the door.

I found myself in SciLi another Friday afternoon. Completely absorbed with studying, I glanced up to find her standing before me.

Gia Khalsa, as she introduced herself, is the owner and sole employee of an interior plant care company that tends to the University’s plants every two weeks. We sat down a few days later. The conversation, which initially focused on her plant-watering duties, sprouted into so much more.

Born and raised in Pittsburgh, Pa., Khalsa spent her 20s and 30s traveling the East Coast. Khalsa eventually settled in Middletown in 1985, unsure of what the future would hold.

“When I got to Connecticut, I was looking for some sort of job,” Khalsa explained. “I looked literally in the newspaper and it said ‘Plant care.’ And I thought ‘Plant care? I could get paid to take care of plants?’”

The plant care company hired Khalsa, and she soon began watering for various clients in the Middletown area, including the University. Khalsa’s job was to water the plants in the greenhouse on Lawn Avenue, which was a part of late chemistry professor Max Tischler’s collection.

“He died before I came on the scene,” Khalsa recounted. “And then Max Tischler’s plants got placed around campus…. Now, I’m tending them wherever they are.”

Many of these “Tischler plants” are still alive, and can be found in many places around campus, from SciLi to the President’s Office to Russell House to Davison Art Center.

Khalsa has cared for many of the same plants for over 30 years and knows them pretty well.

“I have the plants down to a good schedule of every two weeks because most of them are large and one of the worst things you can do for any plant is over-water it,” Khalsa said. “People think you gotta water it a lot, so I have them very well-trained. And I know the plants like the back of my hand.”

Khalsa eventually bought the business from its owner, but found it hard to maintain the company without much experience in business.

“I wasn’t a businesswoman,” Khalsa said. “Or I should say I was not interested in being a businesswoman for a plant company, because I did not market it aggressively. As clients dropped away, it dwindled, and Wesleyan was my only client.”

Khalsa decided to turn the plant business into more of a side job, and make full-time jobs out of her passions and interests.

“From about 1996 to about 2016, I had almost a full-time career being a bellydancer,” Khalsa said. “I taught classes and I did performances. It just grew on its own, it was crazy.”

Long retired from the dance herself, Khalsa currently teaches belly dancing twice a week in Middletown. In addition, Khalsa mentioned she visits senior facilities to teach residents “senior chair exercise,” a form of yoga that engages senior citizens and others in yoga positions by confining the movements to the chair. She also wants to expand her involvement with Feng Shui, the Chinese art of placement, hoping to provide more lectures and consultations and increase her clientele.

Although many of Khalsa’s interests have changed throughout her 33 years working in Middletown, she sees the University as a constant in her life. When asked what her favorite part was, she was quick to respond.

“I feel comfortable,” Khalsa remarked. “When I come in here, I feel it’s a haven.”

“The world is hard to be in,” she went on. “I’m sort of always a left-out person. I don’t leave myself out, but I’m an oddball and I think people look at me and they just think they know something’s different about it…but [Wesleyan] is like home. Thirty-three years—it’s gotta be like home!”

Home, it seems, is made up of the people you share it with.

“When I walk onto campus, certain people know me,” Khalsa said. “I could go here, there. Different professors know me or different librarians know me. It’s all good vibes, like I’m the plant lady.”