Board of Trustees Faces Questions on Divestment, Custodial Workloads 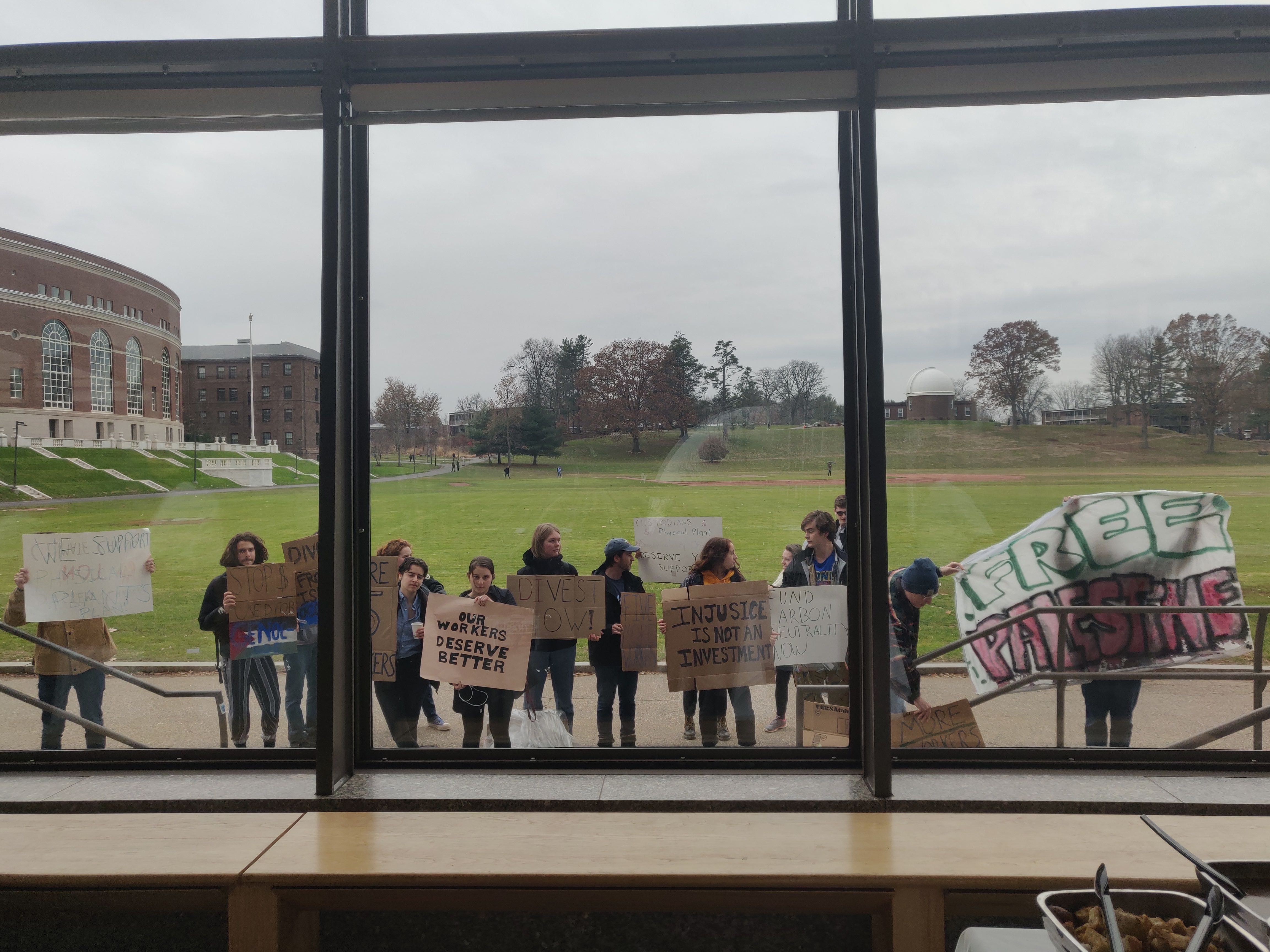 On Nov. 22, the board of trustees convened for their quarterly meeting, and as part of their program, the board invited students to Zelnick Pavilion for an unstructured open forum. The meeting marked the semesterly lunch for students to meet with the trustees.

As the board of trustees made their way to Zelnick Pavilion, protesters from Jewish Voices for Palestine (JVP), WesDivest, Climate Action Group (CAG), and the United Student/Labor Action Coalition (USLAC), stood at the entrance. They chanted “Five more workers,” which has been USLAC’s rallying cry.

One trustee, John Frank ’78, P’12, stopped to speak with students about why they were protesting. Students explained USLAC’s platform advocating for five more workers, recounting the history of custodial staff being reduced from 60 custodians to 50.

“I think that the members of the board, we are the governing board of the University, we have a fiduciary responsibility to advance the interests of the University,” Frank later said. “It’s not like we are elected representatives of the alumni or the students, but obviously, we care enormously about Wesleyan, we care enormously about the community. We can’t do our jobs without understanding what the alumni think, what the faculty think, what the staff thinks, and what the students think.”

“We’ve heard about the custodian protests,” Nachmann said. “I mean, these are operational decisions. The board’s not supposed to get involved in how many people we have [where]—that would infringe on what the administration’s supposed to do. We’re supposed to set bigger-picture strategy about that.”

“The thing you need to make sure that the students understand…is that all of this is a bit of a zero-sum game,” he continued. “There’s so much money around—you can either get more money by the student paying more in tuition, or you can have more or less cost and you can have more or less financial aid. All of this has to add up, to some extent. So it’s fine to say, ‘I want to have five extra guys,’ but where’s the money coming from and is it okay to have less financial aid?”

Other protesters spoke with The Argus about their motives for attending the meeting.

“I’m here because this world’s being absolutely obliterated by fossil fuel companies and companies supporting the occupation in Palestine, and the University’s money is being used to destroy the world in those ways,” Benjy Kline ’23 said. “We want the University to stop supporting those things, and stop making all of our actions as students complicit in this form of destruction by just going here.”

Shirmai Chung ’22—a member of the Wesleyan Committee for Investor Responsibility, which is a panel composed of students, faculty, staff and alumni and that advises the board of trustees—attended the meeting to air the committee’s collective grievances to board members.

“I am here on behalf of the Committee for Investor Responsibility, to ask what the board of trustees’ take on the current investments at Wesleyan is and why Wesleyan has not made a formal commitment to divestment yet, even though it has been realized on multiple occasions through blog posts by [President] Michael Roth [’78], and through our interviews and meetings with the investment office, our conversations between people in the administration that they want to divest, but there is no formal commitment yet,” she said.

A member of USLAC, WesDivest, and JVP, Leah Levin Pensler ’20 discussed why she was protesting the meeting and the common causes of these groups in organizing action around the event.

“We are all here in solidarity with the different demands of students and workers on this campus.” Pensler said. “I think we all share the same values in demanding this University address climate change directly, address workplace safety issues directly. We cannot call for divestment without also calling for ending climate colonialism, in tandem with that, we need to lift up all people, including working-class people, custodians, students on this campus, all workers on this campus and around the world.”

Other climate advocacy centered on a new proposal from the Facilities Department to replace steam pipes.

“Climate Action Group is here because Physical Plant has unveiled a plan to go carbon neutral, which includes replacing the steam pipes for heating with hot water pipes, which will not only save money but be more energy efficient,” said Will Wallentine ’23. “But the whole plan takes a lot of money, and they’re asking the board of trustees for money, and whether or not that plan goes through all depends on the board of trustees.”

Nachmann also addressed the Facilities proposal, which had been presented to the board that morning.

“We’re no experts in steam pipes, but it looks like we’ve got to do something about it, and we’ve got to figure out how to pay for it,” he said.

Nachmann noted that the board will not be voting on the proposal until their next meeting in February.

Trustees also discussed other proposals that had been brought to the board so far that day; namely, the ongoing conversation about the renovations to the Public Affairs Center, what will replace the Hall-Atwater building when it is demolished in a few years, and how the Exley Science Center and Shanklin Laboratories should be modified, if at all.

“The only thing we know is, number one, Hall-Atwater will go,” Donna Morea ’76, P’06, the chair of the board, said. “There are trade-offs. Do we keep Shanklin, do we not? Do we have to tear down buildings, houses, on Lawn Avenue, or not?”

The board has run into many challenges and considerations with the dramatic renovations to the science section of campus.

In tandem with many of the student protesters, trustees emphasized the importance of energy efficiency in conversations about the upcoming remodeling.

“We’re using a lens of energy efficiency when we look at everything,” Bird said. “Like, keeping Hall-Atwater. Hall-Atwater consumes a ton of energy, it’s totally inefficient.”

The hour-long lunch provided specific time for students to meet with the board, but Chung talked about the difficulties of the format.

“I think one hour is too short for any productive conversation to come out of it and I think that the format of this whole event is not very productive either because there is no way to target specific members of the board of trustees to reach out to you or talk,” Chung said. “I would appreciate it if it’s more formal next time, where their roles within the board of trustees are listed.”