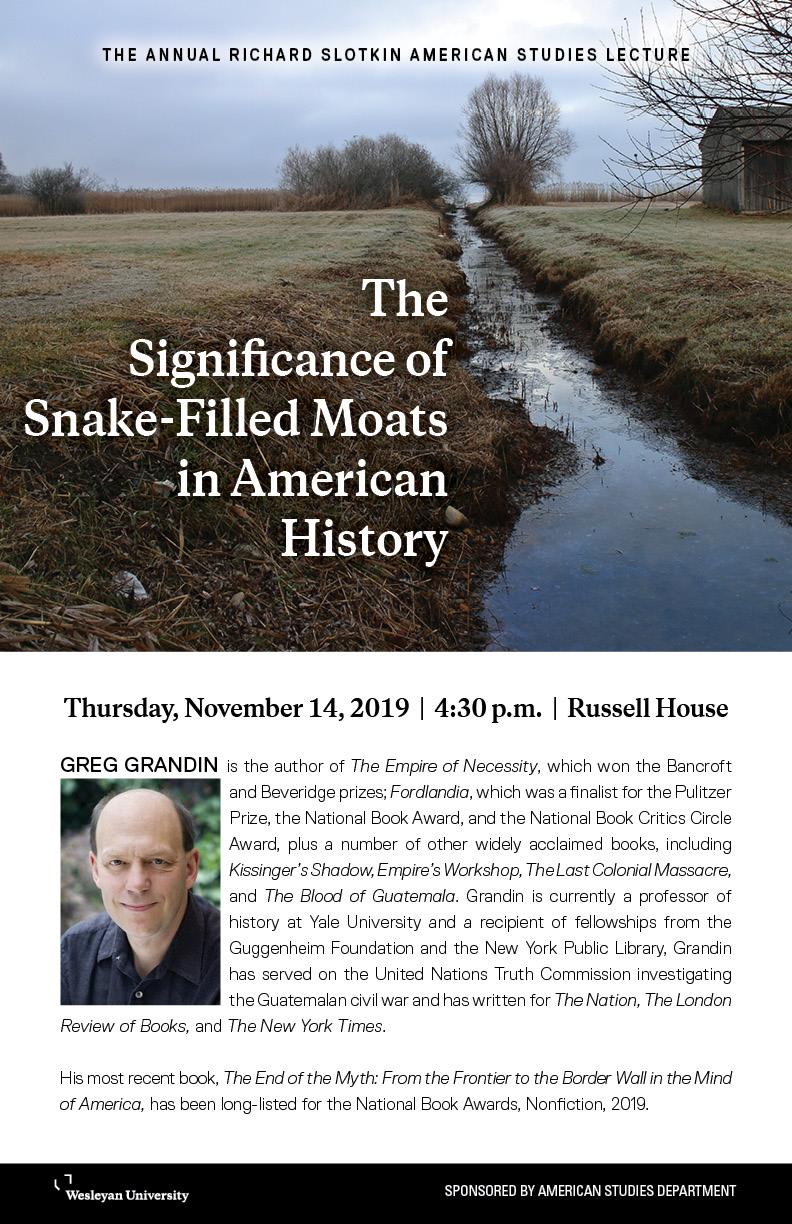 In his lecture, based off his recent book, “The End of the Myth: From the Frontier to the Border Wall in the Mind of America,” Grandin focused on the development of a distinction between frontiers and borders in American history and what that looks like today with Donald Trump as president.

“‘The End of the Myth: From the Frontier to the Border Wall [in] the Mind of America,’ traces one of our most powerful national myths as it unravels from frontier to border wall,” Chair of American Studies Indira Karamcheti said. “This is the kind of scholarship to which I would aspire—meticulously informed and passionately engaged.”

Grandin began by explaining his choice of title for the lecture, “The Significance of Snake-Filled Moats in American History.”

“I originally was going to call the talk “The Significance of the Border in American History,” Grandin explained. “But around the time I was asked for a title, it was revealed that…Donald Trump [had] floated the idea—instead of a wall—to have a snake filled moat on the border. And I mean, it sounds crazy, but it doesn’t even sound that much crazier than what is actually happening.”

Trump’s comment fits neatly into Grandin’s research about what exactly defines a border as compared to a frontier. A frontier, he said, is something that is crossed in order to extend a border, while a border is a line that defines the area within the region. This distinction allowed Grandin to go in-depth about how European colonization and exploration of America differentiates it from other older countries.

“All nations have borders, and many today have walls, but only the United States has had a frontier,” Grandin said.

Grandin elaborated on this distinction by giving examples of major events in American history, such as the annexation of Texas, the Mexican-American War, and the Louisiana Purchase, which all involve the shifting and solidifying of borders through the crossing of frontiers.

Defining the country’s borders also led to the end of open immigration into the United States. Grandin illustrated the controversy of this development through the arguments of historical figures such as Thomas Jefferson, who argued that immigration was central to the founding of America. However, since then, the American borders have become increasingly more secure, and the right to immigrate to the United States has become more restricted.

“Jefferson in 1774 wrote his first political tract in which he argued that the right to move and immigrate was not just a natural right, but in some ways the condition of all other natural rights,” Grandin said.

Transitioning into modern history, Grandin used this discussion of open and closed borders to provide context for several events that have occurred during Donald Trump’s presidency.

“What Trump did was take that border brutalism and nationalize. He turned the securitization [of the border] and all the cruelty that goes with it into a spectacle,” Grandin said.

In establishing historical continuity, Grandin set up his two concluding points. The first was that despite the fact that America has been expanding its borders throughout its history, we are entering an era in which the frontier is abstract rather than physical. Secondly, while frontiers have existed throughout American history that invited exploration of the United States, there are now borders meant to divide and regulate, which is representative of but not unique to the current presidency.

Grandin clarified that the criminalization of immigration and its portrayal in the media is not new. In fact, imagery such as that of children in cages was present in the Clinton, Bush, and Obama administrations. For example, the negative effects of the North American Free Trade Agreement (NAFTA)—which was signed into law by President Clinton—on the Mexican economy led to increased migration from Mexico to the United States.

“In many ways, this isn’t really new,” Grandin said. “A lot of this…was quite commonplace prior to Trump, particularly in the George Bush and Barack Obama administrations, and some of it’s more immediate and proceedings can be traced back to Bill Clinton and the militarization of the border that took place concurrently with NAFTA.”