Men’s Soccer Season Comes to a Close in NESCAC Quarterfinals 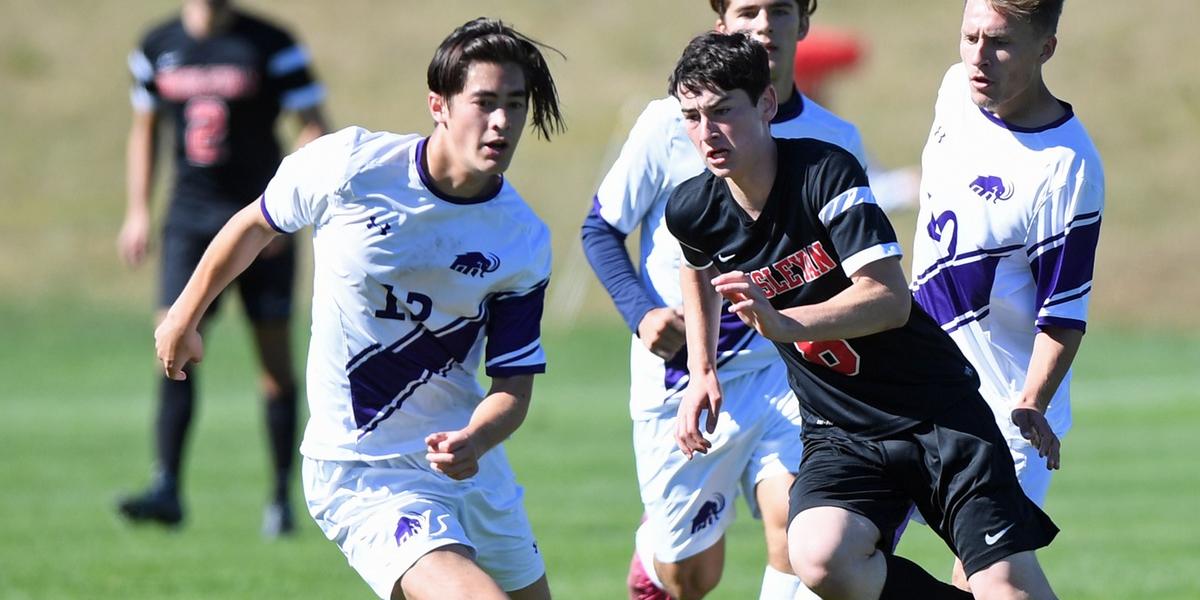 Hard-fought, close matches defined the year for the men’s soccer team, and their season ended with much of the same.

In their final matchup of the regular season, the Cards went to New London to face Conn. College. Only 27 minutes into the game, the Camels found the back of the Cardinal’s net, which proved to be the deciding goal of the match. Despite falling behind early, Wes played hard the rest of the game; their defense would not concede another score. Much like the rest of the season, the Red and Black had difficulty generating offense on the stingy Camel defense.

Although Wes fell in their final regular season game of the year, the Cards still qualified for the playoffs when Bowdoin fell to Tufts. Together, the team watched the Jumbos play the Polar Bears, hoping for the elephants to stomp their competition.

“Another great team moment this year was when we all watched Tufts beat Bowdoin online,” goalie Liam Devanny ’23 said. “The Tufts win put us into the playoffs for the first time since the seniors have been at Wesleyan.”

This was a massive achievement for a Wes team that was coming off a disappointing 2018 campaign.

The Cardinals were up against conference powerhouse Amherst in their playoff match on Saturday, Nov. 2—going up to play them would be a mammoth task. Amherst came out firing, with a goal 30 minutes into the game. However, both sides peppered the goalies, taking a combined 17 shots in the first half alone. Coming out of the break, the Mammoths put the dagger into the Cardinals with another goal in the 53rd minute. The Cards kept fighting, taking seven more shots in the second half. Devanny stood strong, making 10 saves in a solid finish to his freshman season in net. Unfortunately, Wes fell to their Little Three rivals 2–0, ending their playoff campaign and season.

While the season has come to an end for the Red and Black, it has been one of the most successful ones in recent memory.

“I think it was definitely an improvement,” Nick Wallick ’22 said. “Obviously it did not end the way we wanted it to; however, we definitely made strides forward.”

The Cardinals success started from the top with strong leadership from the upperclassmen that created a winning, tough, and hardworking culture.

“Just being with the guys, especially the senior class, is priceless and something that I will always remember,” Wallick said. “They are a special group, and our success this year is due to their outstanding efforts.”

“Our team culture was incredible all season long,” Kingston said. “The seniors have left the team in a great place, and I have high hopes for this returning group.”

This sentiment is shared not only by the upperclassmen, but the soon-departing seniors as well.

“These guys are my brothers, and that is a result of the shift in team culture,” captain Jack Wolf ’20 said. “I can’t remember a time where all classes were as tight as they are now. This success in team culture will only lead to success on the field.”

Obviously the bonds created on this team will last beyond the pitch. However, just because the season is done does not mean that the grind ends. In fact, the hard work of the offseason begins now.

“During the offseason, I’m going to get out with the boys as much as possible and hopefully improve on my footwork as a goalie and add to the chemistry I already have with my teammates,” Devanny said.

This chemistry was part of what the team considered to be so special throughout the year. It also helps translate to the subtler points of the game: moving the ball, set pieces and playing as one unit.

“As a team, I think we will continue to emphasize the importance of moving the ball quickly and with a purpose, as we had the most success throughout the season when we played this way,” Kingston said.

“The team should continue to develop a hardworking and gritty culture,” Wolf said. “I know it’s only going to get better for them, this season was only the beginning and the future is bright.”

The captain is right; the future is bright for this battle-tested Cardinal team. Despite graduating six seniors, the underclassmen core of this team came to play throughout the year. The experience of making the playoffs and having a winning and team-centered culture can only help the Red and Black moving forward.

“We got some great results this year, but I think we have a lot of room for improvement in terms of being able to string together full games of excellent soccer,” Kingston said.