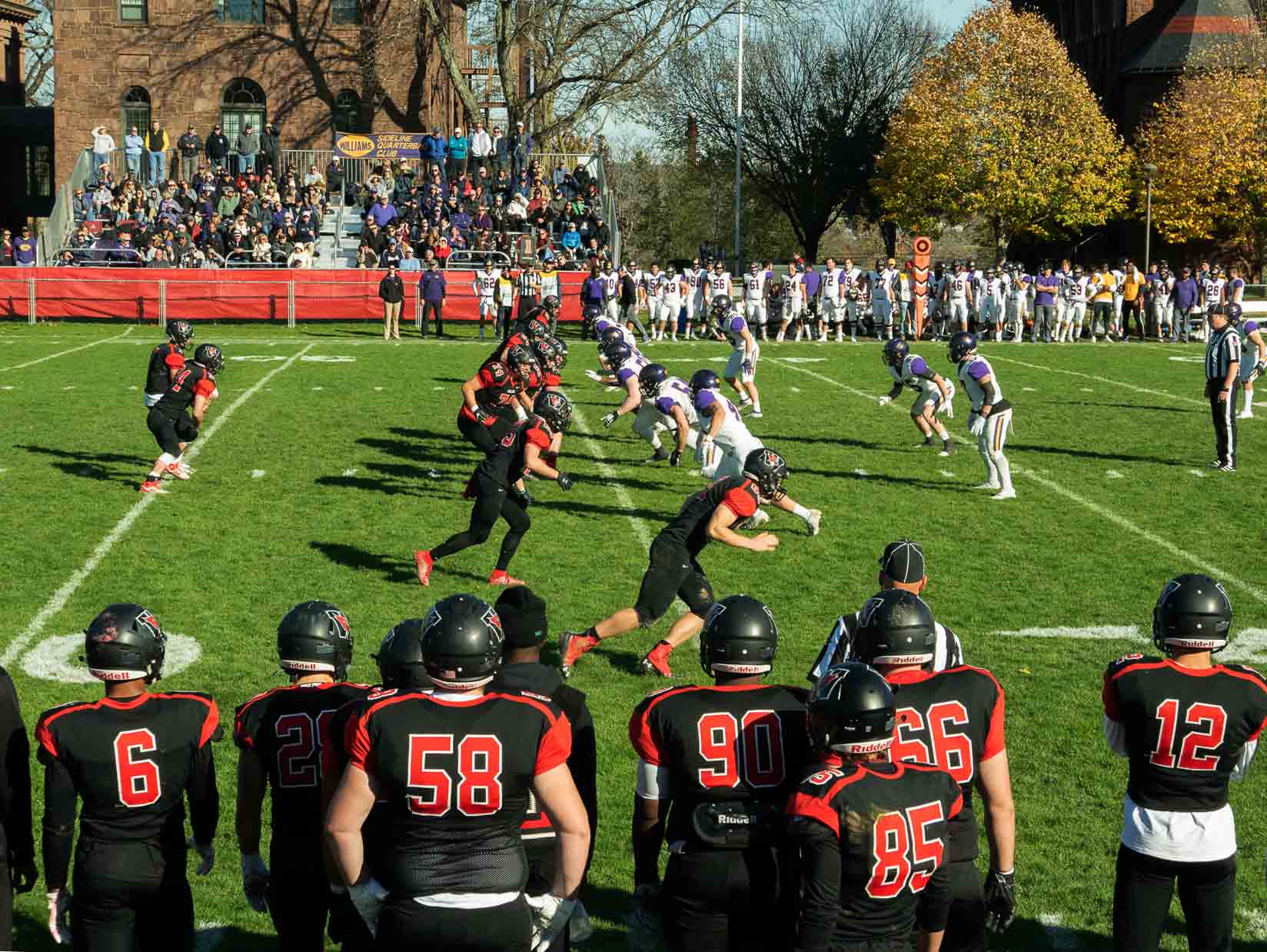 Cardinal football strikes again, winning against Williams in overtime to take the Little Three Championship and to continue Wesleyan’s run of success this year. David Estevez ’22 was the star player this week, scoring all four of Wesleyan’s touchdowns: two rushing, one passing, and one from a kickoff return. But this victory was not easily won. Williams looked like the more complete and formidable side for large stretches of the matchup. Despite Williams’ tough fight, Wesleyan managed to persevere throughout the game while the Ephs struggled during the latter stages.

The Red and Black offense scored when it needed to during the fourth quarter and overtime but struggled to maintain drives and keep possession. Unlike in other matches this season where offensive production was well balanced between passing and rushing, Wesleyan only had 65 yards on the ground—a season low.

The Cardinals, however, have not been a rushing team this season; once again, the passing game was vital in winning the match. Quarterback Ashton Scott ’22 threw for over 150 yards on 31 attempts, but it was Estevez who gave the team the spark they needed. A versatile athlete, Estevez was featured heavily in the backfield, even playing quarterback at times.

By throwing a 52-yard touchdown to Delando Clarke ’21, who had 67 yards on the day, Estevez opened the scoring for Wesleyan in the second quarter. Estevez also scored two rushing touchdowns. The first was in the fourth quarter with only 17 seconds left on the clock, which tied up the game and took it to overtime; the second came in overtime to win the match.

Despite Estevez’s successes, the offense struggled against Williams’ defense. The offensive line allowed four sacks, matching the season-high number against Middlebury—the best team in the league at pressuring the quarterback. Moreover, the Cardinals did not convert a single third down during the game and only one fourth down. Thus, they were forced to punt seven times during the game and had significantly less time of possession compared to Williams.

This match was similarly taxing and difficult for the defensive side of the ball. The Ephs gained a hundred more yards on offense compared to the Cardinals. They also managed to convert 8 of their 17 third downs, and 1 of their 5 fourth downs, throughout the match. The Red and Black kept up a decent presence when defending against the pass, allowing only eight completions and an average of 4.4 yards per pass attempt. It was a different story against the Williams running game; Williams rushed for as many yards as Wesleyan gained in total, 296.

This was also the first game of the season where the defense did not gain a sack or an interception. But they also held Williams scoreless after the fourth quarter, forcing their offense off the field in every drive following the Ephs’ touchdown in the third quarter. Though they may have allowed a fair amount of yardage, the defense stepped up to the plate when required and stopped Williams in their tracks during the latter half of the match.

Once again, Estevez was the highlight of special teams this week with a 97-yard kickoff return for a touchdown during the last minute of the second quarter, evening the score at 14–14. But aside from that spectacular play, little happened on special teams: only one punt return for a yard and little else. This was also one of the few games this season when Wesleyan committed more penalties than their opponents and lost more yards to penalties.

The Cardinals only have one more game left in the season, which is against Trinity this Saturday. It will not be an easy match, as the Bantams have shown themselves to be a formidable team. They’ve got the highest-scoring offense in the NESCAC and the second-best defense in the conference.

Despite these intimidating stats, the Red and Black have a better overall record and have beaten two of the teams that defeated Trinity. With a final matchup under their wing, the Cardinals look to take second in the conference after undefeated Middlebury.