Seniors Ridley and Hurlock Present Dance Theses in the ’92 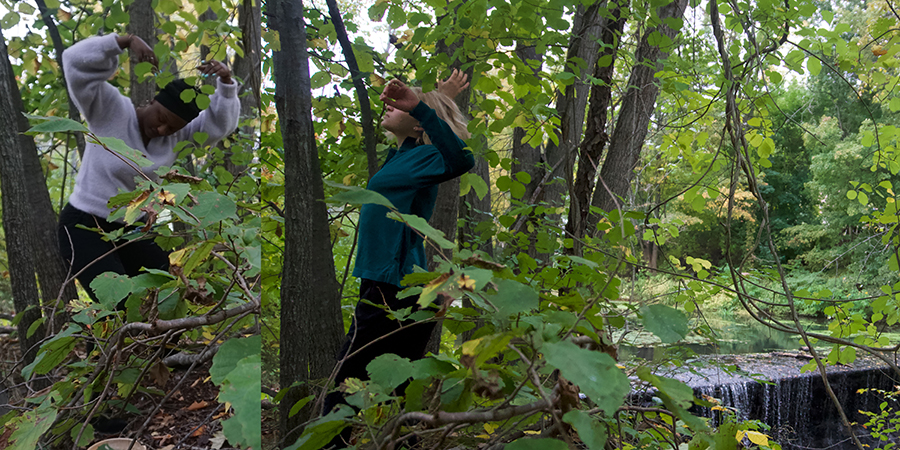 This homecoming weekend, the Patricelli ’92 Theater hosted the Fall Senior Thesis Dance Concert, “(Re)Source,” with choreography by seniors Gabe Hurlock and Iris Ridley. The show was divided into two performances, each with its own distinct style and motifs.

As the lights of the theater progressively dimmed, the audience could hear the soft sound of the dancers’ feet as they walked across the stage. Iris Ridley’s “inhabit” began with a series of movements performed in unison by four dancers: Emma Grover ’21, Katerina Ramos-Jordán ’21, Charlotte Rich ’20, and Anna Marie Rosenlieb ’20. As silence filled the theater, one could almost hear the breathing of the dancers, whose bodies purposefully seemed tense and heavy. The dancers repeatedly alternated between standing and moving horizontally on the ground, with rapid jumps and sudden arm extensions suggesting some idea of violence. The background sound of heavy rain intensified as the choreography became fiercer, but never lost its delicacy. A dance move imitating the action of a wheel, or an endless circle, eerily echoed the cyclical framing of the choreography: the dancers walked off the stage by performing the same movements that marked the very beginning.

“The piece is called ‘inhabit’ both because I was thinking about how the dancers could inhabit space, moving in and out of group patterns almost as sculptures with their gestures, and because I am interested in being ‘in habit,’” Ridley explained. “How does repetition of movement shape and affect our bodies and energies? I try to create heightened spaces of exhaustive, charged movement that brings groups of dancers together and apart.”

The second part of show, entitled “Mother.silent.Suicide”, carried a more explicit political message. The choreography by Hurlock and Associate Professor of the Practice in Dance Iddrisu Saaka explored concepts of motherhood, Black feminist theory, and Westernized culture by combining theater, contemporary and West African dance, and poetry. The performance began with a single dancer on stage, Hurlock, who spoke and moved slowly across the silent stage.

“It all begins in an Afro-pessimist dream,” she said as part of her monologue. “Everything is spoken but nothing is materialized.”

“To be free, to be free.” As the downbeat atmosphere of the show became darker and darker, the issue of freedom and imprisonment arose, as Hurlock sang several times while swaying her body wrapped in a white draped skirt. A group of dancers suddenly stormed the stage, wearing black clothing and disturbingly decorated ski masks. Each dancer imitated a particular action that can be witnessed in the Western world: one mimed typing on a computer; another used his fingers to frantically count without a purpose; two other dancers moved in a way that suggested a fight. Backed up by the sound of a ticking clock, as well as screaming and crying, the anxiety of the choreography built up until Hurlock weepingly fell to the center of the stage, holding her stomach.

“Where’s your spirit?” she cried, as the nightmare vanished.

Hurlock adopted a profoundly serious tone as she spoke of motherhood and the pain of childbirth. Her arms towards the sky, she began to dance to the beat of drums and trumpets, before being joined by Saaka. Their movements evoked labour and strenuous action, and some even led to a carefully executed loss of balance. The audience was almost able to feel how heavy their bodies were under the weight of the violence and tension. Sounds of lightning and rain struck the stage, so loud that they mirrored the bang of a gunshot.

“I become invisible after that gunshot,” Hurlock said in a quiet and helpless voice.

As the anonymous dancers dressed in black reappeared on stage and surrounded Hurlock, an African beat provided the rhythm to the body of dancers’ choreography as they danced together, forming a human chain and acting as if they were physically helping each other carry a heavy weight. This glimpse of hope was quickly covered by loud sirens and fighting, the dancers chaotically moving across the stage, interacting only to push or nearly hit each other. Suddenly, one dancer fell to the ground after a loud noise—implying the impact of a gunshot—was heard. One by one, the dancers each fell according to the same pattern, except for Hurlock.

Religious pressure, domination, and submission were the powerful and thought-provoking concluding themes of the show. The striking image of Hurlock kneeling on the stage, covering her own face with a pink niqab while another dancer holds an oppressing hand above her, is one that will surely be remembered.