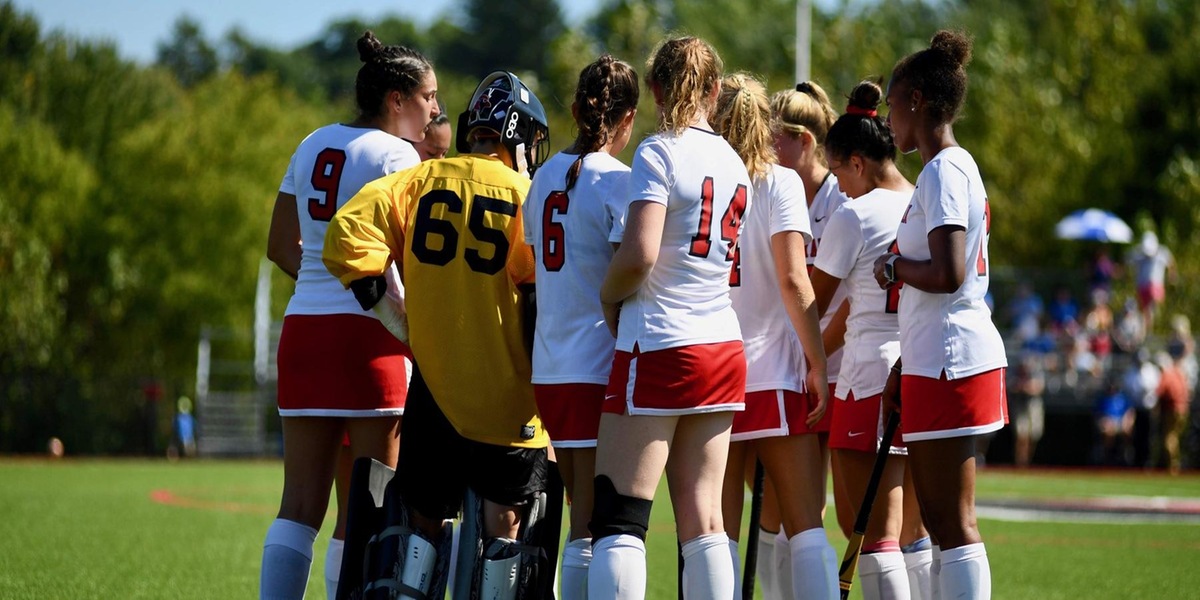 Wesleyan field hockey closed out their fall season last Wednesday evening with a crushing loss against conference competitor Conn. College. The team ends their 2019 run with a 5–10 overall record and a 1-9 record in conference, landing them in last place of the NESCAC.

Wednesday’s game ended a season of many hard-fought games resulting in losses, most of which the Cardinals were within one or two goals for a win. The Camels came out strong offensively, missing a shot before scoring a goal just under nine minutes in. They managed two more shots before the end of the first period, but Wesleyan’s Delaney Wood ’20 stood formidable in net.

The second period was quickly filled with action as first-year Diana Schwarz sunk her sixth goal of the season in the 18th minute. Conn. College retaliated less than five minutes later with their second goal, one that would secure their later victory.

Wesleyan attempted to strike back with shots from Olivia Baglieri ’22 and Schwarz, but both were stopped by the Camels before the end of the half.

Halftime proved a rejuvenating break for the Cardinals, who flocked to their offensive territory and dominated the third period. After a penalty corner from Baglieri, Amy Schaap ’21 shot on goal, took a penalty corner, then shot once more. Schwarz followed up with more offensive pressure, notching her second shot of the game.

Schwarz continued her effort in the fourth period but unfortunately could not convert. Baglieri made Wesleyan’s final attempt to even the score, but the Camels’ goalie shut down her shot in the 56th minute.

By the time the whistle blew, Wesleyan had outshot the Camels 9 to 7 and created 11 penalty corners to Conn. College’s three. Yet the Camels’ offensive effort proved more successful on the scoreboard, and they took home their first NESCAC win. While Conn. College entered the matchup with an 0–9 conference record, Wesleyan was 1–8. Wednesday’s fate equalized the two teams in NESCAC standings, tying them for last place.

Despite Wednesday’s loss, the Cardinals can walk off the field knowing this season showed impressive improvement from recent years.

Inside the numbers, the Red and Black haven’t had an overall record this high since their 2013 campaign, when they went 6–9. While their conference record remains somewhat similar to recent seasons, the team notched their first NESCAC win in two years with their historic win over Tufts. In the past four years, Wesleyan has only beaten conference foe Conn. College, who also resides toward the bottom of the league. The Cardinals’ 1–0 win this season over Tufts is especially impressive—the Jumbos are not only third in the conference, but also fifth in the National Field Hockey Coaches Association rankings, chosen nationally among all Division III competitors.

While the Red and Black may have only topped Tufts, their other conference matchups were not lost causes. Seven of their NESCAC defeats were within two goals, and five of those seven were within just one. Although the team faced a rough slew of heartbreaking losses, many of which took place within the last month, these close competitions demonstrate a fighting chance at victory.

“We play in a very competitive conference and most of our games are against teams that are nationally ranked,” head coach Christine Kemp said to Wesleyan Athletics. “To be able to upset a team like Tufts, and lose by just one goal to several ranked squads, shows that we can play at that same level.”

Outside of team statistics, the Cardinals also had individual leaders on both sides of the ball this season. In goal, Wood made 114 saves, just six behind NESCAC leader Maggie Reville from Hamilton. Wood’s save percentage of .786 garners her third in the ’CAC, behind Reville and Bowdoin’s Maddie Ferrucci, respectively.

On offensive, Schwarz led the team with six goals this season, tying her for 15th for most goals in the NESCAC. Schaap followed close behind with five goals, tying her for 28th.

Wesleyan’s offensive effort was also reflected in the shots category of individual standings. Baglieri led the way in 14th with 41; Schwarz followed in 22nd with 35; Nikki Gerjarusak ’21 took 36th with 27.

The team graduates seven seniors this year—Erica Horowitz, Rachel Curran, Maddie Shea, Rachel Pomerantz, Abby Manning, Kayla Di Sibio, and Wood. Going into next season, the Cardinals retain a strong underclassmen core with numerous offensive leaders and an impressive new coach, who in her first year has already taken the team to the next level.