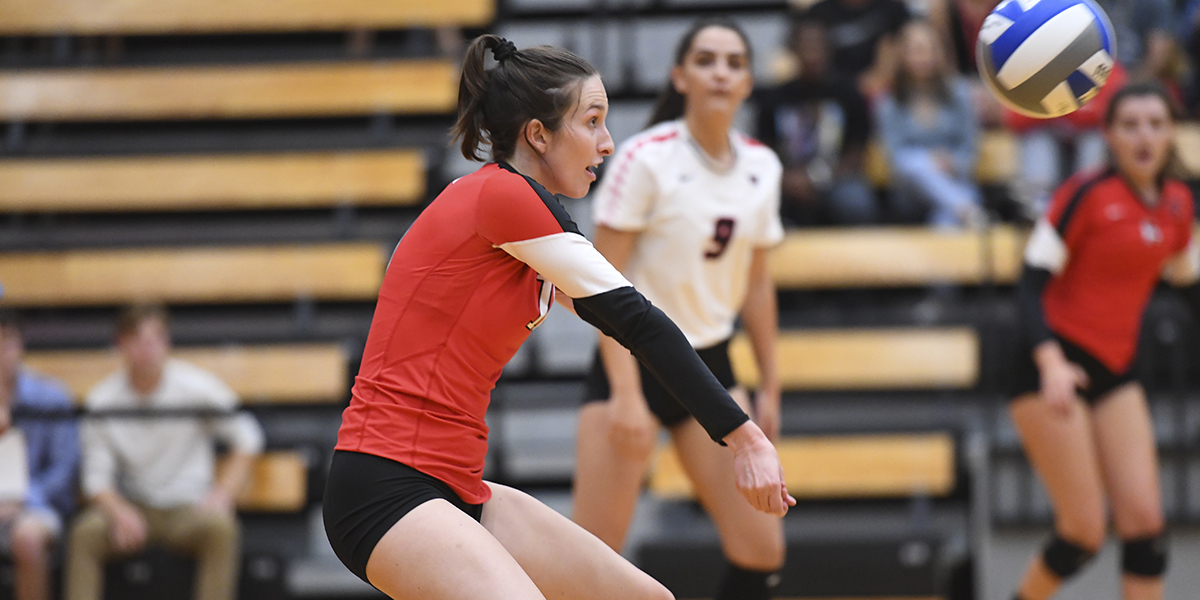 Michael Roth ’78, one of my professors who happens to moonlight as the president of the University, let out an overjoyed yell during class last Monday.

“How ’bout that volleyball team!” he exclaimed, excited by a slew of recent victories that have brought the team to the forefront of the NESCAC.

And the truth is, Wesleyan’s opponents haven’t yet found a safe enough space to hide this fall, as the Red and Black defeated Juniata College before taking down Williams to claim their third consecutive Little Three Title. Climbing to the No. 20 overall rank in the country, the Cardinals have just one more game to go before their regular season concludes.

After an easy win over 0–9 Trinity on Oct. 17, the Red and Black turned their attention toward a familiar foe. Last year in Pittsburgh, Penn., Juniata stopped Wesleyan’s Elite Eight run short, returning from an 11–8 deficit in the fifth set to send the Cardinals back home to Middletown. With a whole year to recover, Wesleyan came ready and prepared for a rockfight on Oct. 18. A rockfight it was; the two evenly matched squads traded blow for blow until a narrow fifth set victory clinched the match for the hometown Cardinals.

Wesleyan nearly stole the first set, leading 26–25 late with a chance to get out to an early lead over the Eagles, but Juniata’s Victoria Taylor soon buried the Cardinal team beneath three kills. The visitors emerged with battle scars but ahead, 28–26. The next set saw another blown lead late; down 21–18, the Cardinals rallied with five straight, then let Stasie Litinsky ’20’s two kills power them to a 24–23 lead. An Eagles error finished off the set, leaving each team with one apiece.

Yet again in the third, Wesleyan was unable to close out the match. Despite trailing for the majority of the set, Juniata managed to piece together a 10–4 run, then scored the final three points to win 26–28. Facing elimination and a second loss to their Pennsylvania rivals, the Red and Black weren’t ready to rest quite yet. Down 18–16, a strong serving from senior Nicole Hilton served as the push the Cardinals needed. Scoring seven straight, Wesleyan forced a crucial fifth set with a 25–20 victory.

As was fitting for the match, the Cardinals and Eagles remained knotted for the majority of the final set, with the two teams tying the score eight times. Litinsky and Hilton kills put the Cardinals near victory, 14–13, but it took another two each from Hilton and Maddie Kurke ’22 to seal the deal at 16–14 and give Wesleyan another tally in the win column.

Head coach Ben Somera was impressed by his team’s mental toughness and perseverance in the win.

“I thought we played steady the entire night, and again our defense came up big and helped us win points in transition,” Somera said to Wesleyan Athletics. “I liked the way we competed and hustled, and for the most part we had a great attitude and were disciplined in our system.”

On the stat sheet, Hilton lead in kills for the Cardinals with 17, while Kaira Muraoka-Robertson ’22 paced the team with an astounding 61 assists, alongside 11 digs.

After such a charged match, Wesleyan’s sweep of Williams on Oct. 25 had the potential to feel like an emotional letdown. Of course, with the potential to take home the outright Little Three Championship and coming off seven days’ worth of rest, the Cardinals aimed not to be caught flat footed. Wesleyan’s effort paid off, as the Cards cruised to a 25–17 victory in the first set.

Judging by the first set, it sure didn’t look like the Ephs came prepared to put up much of a fight.

The second set was far more competitive; despite leading 10–4, the Cardinals took their foot off the pedal, allowing Williams to get back into the set with a 13–5 run. After back-and-forth play, Litinsky clinched the set for Wesleyan, 25–23.

The third set played out similarly; Wesleyan led 10–3 before Williams responded to make it 16–15. With a Little Three on the line, the Red and Black survived a late 2–0 run from the Ephs as they took the third set, 25–23.

Both team’s offenses sputtered in the match, with neither recording a team hitting percentage over .200. While Bella Ahearn ’23 and Gabby Bennett ’20 both recorded efficient games, with Ahearn leading the team in kills, Litinsky, Muraoka-Robertson, and Hilton all struggled with low kill percentages. As such, while complimentary of the win, Somera emphasized that the team still has some work to do.

“It’s always good to win a rivalry match, and our defense and serving were solid again,” said Somera. “Offensively, we’d like to see four players attacking over .200 and while our efficiency wasn’t quite there, our kill-production was good. We need to take a look at the video to see why we made so many errors.”

Off to a school record 19–2 start after defeating Hamilton on Oct. 26, the Cardinals only have one more match against Ithaca College on Nov. 2. At home at 2 p.m., the match will serve as Wesleyan’s senior day. From there, the only way to look is toward the NESCAC and NCAA postseasons.