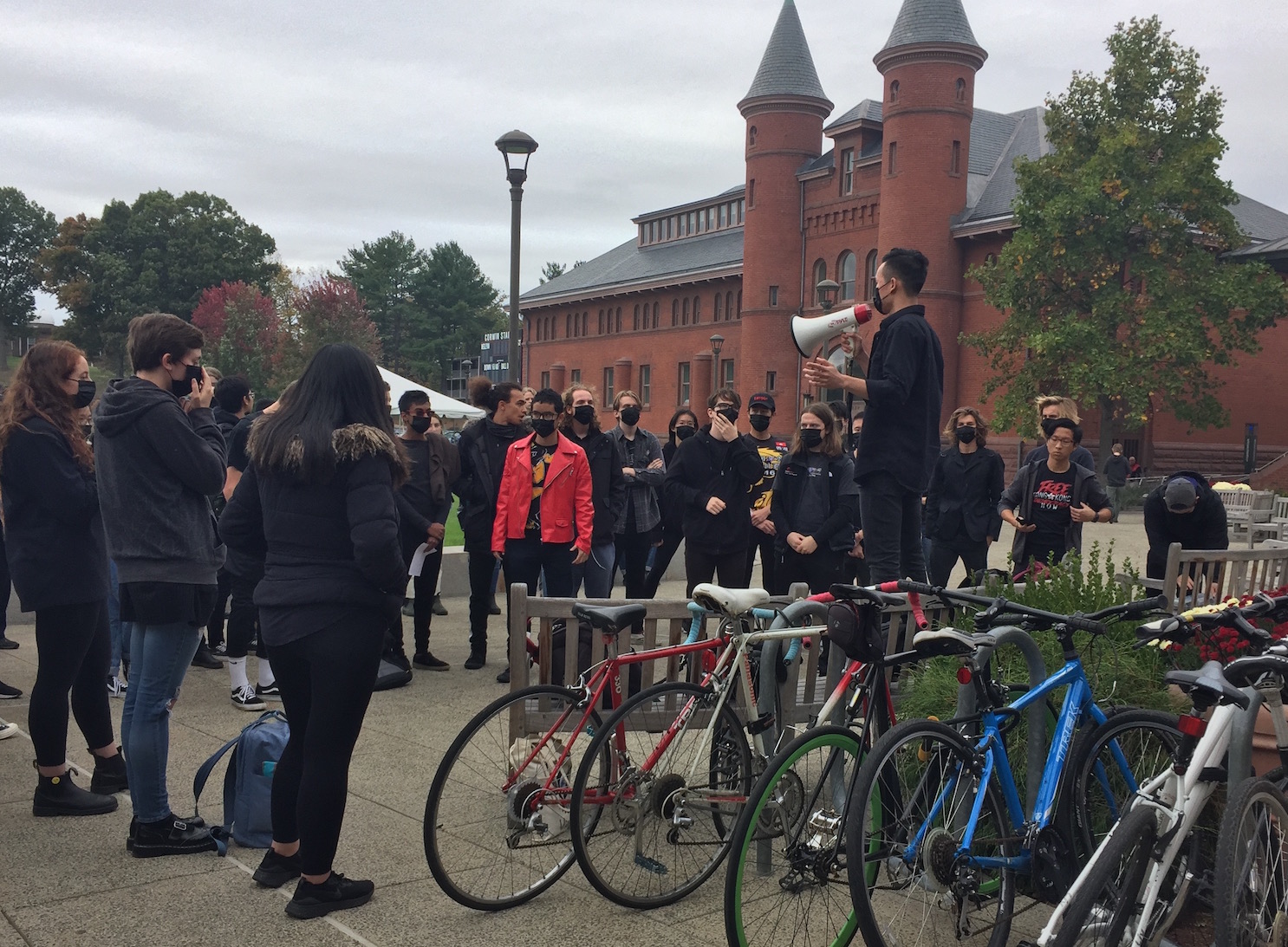 Students participated in a solidarity rally for Hong Kong outside of Usdan on Friday, Oct. 11, joining 22 other cities that also demonstrated. Organizers of the rally also added the denouncement of Wesleyan University’s proposed joint venture with Hengdian Group to the rally’s platform, declaring the two issues were inextricable from one another, which incited backlash from students online before the rally.

One of the rally organizers, Joy Ming King ’20, said that, because of the proposed joint venture’s connections to the Chinese Communist Party (CCP), students who wished to stand in solidarity with the people of Hong Kong as they face government crackdown must also oppose the joint venture.

Since June of this year, protesters in Hong Kong, including Wesleyan students, have engaged in sustained resistance against the CCP and the local government. While the Hong Kong protests began in direct response to an extradition bill that protesters view as a violation of Hong Kong’s constitution, demands have broadened to address the escalating police violence, the rising number of protesters arrested under charges of rioting, and universal suffrage.

In February 2019, the Wesleyan administration was approached by the Chinese corporation Hengdian Group and the public university Shanghai Theatre Academy (STA) with the proposal of establishing a joint venture campus in Zhejiang, China. In this joint-venture proposal, a CCP secretary would serve as the leader of the new university, tasked with more broadly considering the mission of the joint-venture campus and its relation to the CCP’s mission. Representatives from Hengdian visited Wesleyan in spring 2019, after which Wesleyan sent a delegation to China.

The Facebook event that King created for the rally called upon members of the campus community to show their support of Hong Kong and oppose the joint venture.

“The Wesleyan community must stand together in solidarity with the people of Hong Kong as they continue their struggle for freedom and self-determination,” King wrote in the Facebook event. “We must also show firm opposition against the proposal for Wesleyan to partner with a large corporation affiliated with the Chinese Communist Party in building a campus in China. If Wesleyan is serious about upholding its values as a progressive institution, it must not fall into complicity with the forces of authoritarianism, exploitation, and colonialism.”

Two nights before the rally began, students began expressing strong dissatisfaction on Facebook with how rally organizers linked supporting Hong Kong with denouncing Wesleyan’s proposed joint venture with Hengdian Group. Students also voiced concerns that the actions of the CCP might be conflated with the beliefs of all mainland residents.

Yongxi Tan ’22 was one of the few students from mainland China who attended the rally. She shared how certain existing narratives about the CCP can make it challenging for her to feel comfortable expressing her thoughts.

“I was scared because I felt many of my friends would disagree with me or I would offend many people I care about—especially my Hong Kong friends,” Yongxi Tan said. “I find it really hard to speak up because people keep telling me that my country is a tyranny, it’s bad, and my country is doing a lot of bad stuff. Subconsciously, I have been telling myself that I don’t think my country is a great country, or [that] my country is honorable enough to say that it is a free country, a liberal country. But now, when I really think about what it means to be a Chinese [person], I guess it means a lot of things. And having people impose the idea of what they think my country looks like is a very unfair conversation.”

King began the rally by leading attendees, numbering around 30 and increasing to 70 as the rally progressed, in chants, including “Fight for freedom, stand with Hong Kong” and a call-and-response chant: “When Hong Kong is under attack what do we do?” “Stand up, fight back.”

Following the chants, King began his speech by extending solidarity towards mainland Chinese students and emphasizing that members of the community must look out for each other.

“I understand that there are people on this campus, especially folks, friends of mine from mainland China for whom these issues and this rally today brings up some very uncomfortable feelings,” King said. “Nobody should deny those feelings, especially in a moment where Sinophobia, racism for Chinese people, is on the rise.”

According to his own research, King said that the Hengdian Group has close ties to the CCP, connecting this involvement to the experiences he had when protesting in Hong Kong.

“For me, if you’re serious about being in solidarity with Hong Kong, it means looking at what this administration is trying to do behind our backs,” King said. “Trying to start a campus in partnership with not just any corporation, which by itself would be a very problematic thing, but a corporation that I believe that I’ve seen from my research…has deep connections with the very people who are subjecting my friends and my family at home to unspeakable terror right now.”

To conclude his speech, King called for continued, civil conversations, reminding attendees of the pressures and real risks both mainland and Hong Kong students are feeling. King then urged attendees to go to the Oct. 30 town hall for students to share thoughts on the potential joint venture with the administration, which was announced in an email from the administration on the evening before the rally.

“This rally is the beginning of that conversation, and as we proceed with this conversation, I hope it can be done in the most thoughtful and respectful way possible with every member of this campus, including students from mainland China,” King said.

Quentin Tan ’22, a rally attendee from Malaysia, pointed out how difficult holding these conversations can be.

“It’s hard for me to mediate positions when people, friends from home are divided on this issue,” Quentin Tan said. “Returning to campus, some friendships and bonds we had fell apart due to these political developments and movements.”

Attendees then held a minute of silence in support of Hong Kong, and King requested for attendees to put on face masks that were being distributed. While giving face masks to attendees, rally organizers explained that Hong Kong Chief Executive Carrie Lam recently invoked sweeping emergency powers to ban face masks that protesters wore to protect their identities at demonstrations, a move intended to quell pro-democracy protests but has only intensified anger and distrust of the government.

Another rally organizer, Bryan Chong ’21, elaborated in a post-rally interview why the organizers wanted attendees to wear masks.

“Like I said in my speech at the rally, we simply live in different realities and the idea behind the masks is we want to give students a taste of what it feels like to be a protester that is afraid of having their identity be unmasked and having their identities be exposed to the powers that be that control their livelihood,” Chong said.

Following the request for attendees to put on their face masks, Chong then delivered a speech about how much his reality back home in Hong Kong differs from his reality here at Wesleyan. In addition to highlighting how these protests have exacerbated political differences between parents and students to the point where parents are kicking students out of their homes, Chong spoke about how these protests are affecting even children.

“This is a reality where children, literal children, have had to put on masks, that have to strike from school because the government has forced them to,” Chong said. “These are children that know they are growing up in an age of fear. They know that they are fighting for a future that they have no choice but to live in. They are out there fighting for my freedom to be here speaking to you all today. It’s a tough reality. It’s a harsh reality.”

Nevertheless, Chong continued, he has seen how engaging in these acts of resistance inspire political awakenings in youth, showing them that change is possible through action.

Thailand resident Bright Palakarn ’20 then delivered a speech arguing that this joint venture would only lend credence to the CCP and serve its interests.

Before the rally, students debated online whether the joint venture would deliver a “true” liberal arts education with its close ties to the CCP, with some saying that the CCP imposes significant educational constraints on institutes of higher education. If a liberal arts education is possible under the CCP, others argued that introducing this type of education system could pave the way for reform in the CCP.

Rally attendees then walked to South College, where King then led protesters in chants, such as “No deal with the CCP.”

“Again, I’m speaking for myself here, not for anyone else,” King said after the chants concluded. “And if you have different opinions, yes, let’s have a respectful conversation.”

King ended the protest by leading attendees in one final chant: “We’ll be back.”

In holding further conversations, students have voiced concerns that continued demonstrations on campus reflect what they believe to be an oversimplified narrative of the CCP.

“I personally have a lot of issues with the CCP, but at the same time they are very conflicted feelings,” Yongxi Tan said. “The only reason why my grandparents were able to go to school or go to work was because the CCP was more focused on farmers and gave them access to education and resources…. But at the same time, a lot of the policy-making and form of the government I personally strongly disagree with. I went to an international school, and I grew up learning United States history, so it was really hard for me to find it reasonable for my government to be like this…. I think these complexities of feelings should not be ignored when we are telling the story of the Chinese government.”

One point of contention was the level of control the CCP has in China. Some students believe the Chinese government is more totalitarian than others do, which could affect whether the CCP secretary in charge of the joint venture would have a more symbolic or functional role in running the school.

However, students have voiced that to deny the reach of the CCP is to inherently dismiss the lived experiences of all those suffering under the CCP regime and to stand in opposition to the fight of Hong Kongers.

In reflecting on what solidarity means to him, Chong highlighted that students do not have to be directly suffering under tyrannical rule to take a stand against it.