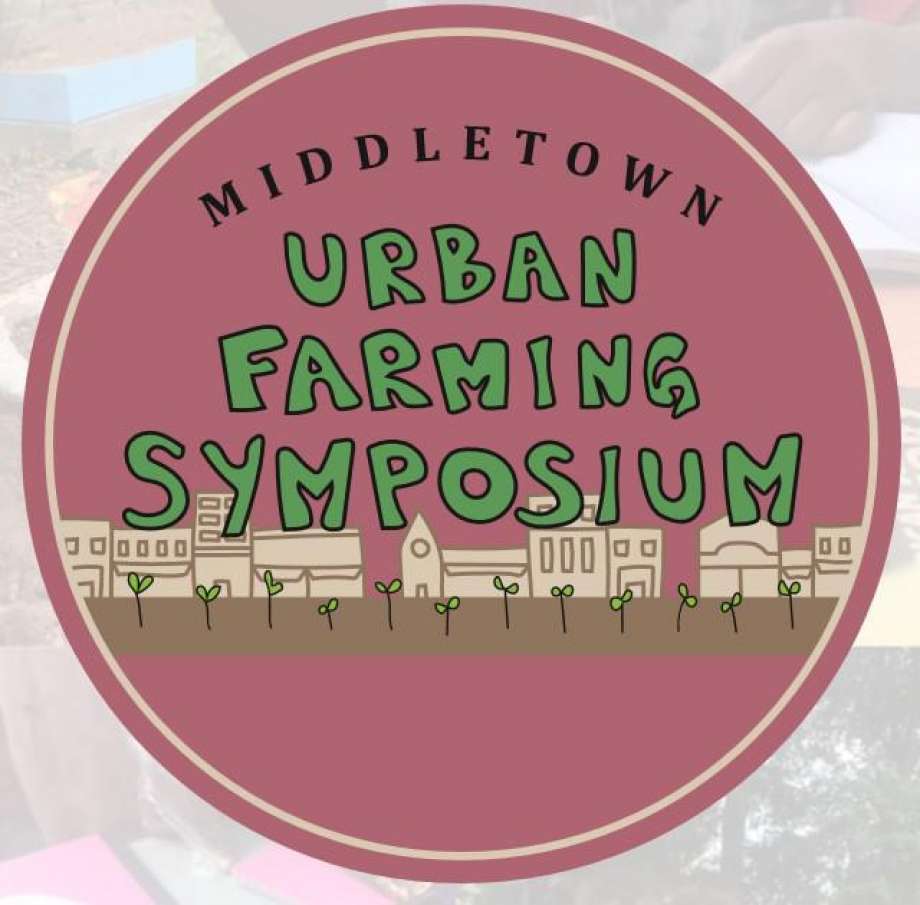 The first ever Middletown Urban Gardening Symposium, comprised of a diverse series of workshops, speeches, farm tours, and more, was held this past weekend in various locations around the city. Such range in activity—such as seminars, farm tours, and mud workshops—and location was mirrored by the vast array of organizations responsible for putting on the event, including Art Walk Middletown, Middletown Permaculture Network, the African American Studies Department, Veg Out, and over 10 more.

The importance of this range was emphasized throughout the event, as attendees and leaders—from local farmers, to Wesleyan students and professors, to community members who wanted to learn more about Middletown food systems—continually reminded each other that food justice is more than just a lofty concept to be abstractly discussed, but something concrete, which can and should be located in Middletown.

The idea for the symposium was developed this past summer, while Wesleyan graduate Ingrid Eck ’19 was working on the Middletown Food Policy Council (MFPC). MFPC is a council which was organized through Sustainable CT, which seeks to increase connectivity between local food justice efforts and statewide initiatives.

“We recognize Middletown as a place that has a lot of foodie people, and food organizations, and food activists,” Eck said. “And I think it was a goal for us to create a formal network that could get these people in the same room and talking about things that they all care about. So we thought it might just make sense to like kick things off with a really big event—for farming, specifically in Middletown, since we have a lot of community gardens.”

After an inaugural welcome from the Middletown Food Policy Council, the Symposium kicked off with a talk from Dmitri D’Alessandro, a local business owner and activist on the board of MFPC. D’Alessandro has been a leader in the recent effort to establish a community garden on an eight acre parcel of land on Miller Street in the North End, which was leased to the North End Action Team (NEAT) for $8 a year. D’Alessandro discussed NEAT’s plans for the farm, highlighting the importance of local agriculture in just food systems and describing their vision for the farm as attentive to the needs of the land, the ecosystem, and the community.

Next on the docket was the founder of Forest City Farms, Gabriel Russo, who spoke about urban farming in Middletown. Russo described the process of establishing Forest City Farms as challenging, but rewarding, and echoed D’Alessandro’s calls for gardeners and farmers to be attentive to the ecosystems in which they work. Working near the Connecticut River, he explained, forces him to consider how his farm would inevitably affect the surrounding environment and create methods for controlling runoff into the river.

After Russo spoke, people scattered to various locations to attend discussions in the subsequent rotating workshop series, including “Environmental Classism and Food Inequity,” “Local Food Startup: Planeat.com,” “Plant Revolution: Food Justice as Systematic,” and “Financial Resources for Small Farmers.” Although time did not allow for the workshop series to actually rotate, Resource Center Sustainability and Spirituality Intern Syed Hussain ’21, who was a key organizer of the event along with Eck, managed to move around to sit in on each of the discussions.

“All of them just had this really collaborative environment,” he said.

At the Local Food Startup workshop, Visiting Assistant Professor of Environmental Studies and Public Policy Rosemary Ostfeld talked about green entrepreneurship and her start-up, Healthy Planeat, which aims to help small farmers to turn a higher profit by connecting them to local distributors. One of the people in attendance, Hussain explained, was really plugged into the world of Connecticut agriculture and was able to provide Ostfeld with a list of farms, offering ideas and connections that could help her vision grow and expand.

VegOut program director Jolene Leuchten ’21, who was also a lead organizer of the symposium, echoed Hussein’s excitement about the quality, tone, and range of participants in the Plant Revolution workshop, specifically.

“It was an interactive discussion about changing the structure of the Middletown food system to support local farming efforts, rather than putting the burden on the individual,” she wrote in an email to The Argus. “We talked about how establishing relationships between local restaurants and local farms, for example, would build on an already strong component of the Middletown economy to bolster sustainable food production. It was really satisfying to hear the perspectives of non-Wesleyan attendees, which, as a student on this relatively insular campus, I typically don’t hear. It inspired me to be much more deliberate about incorporating Middletown residents into the conversations that take place here.”

When the workshops came to a close, participants headed back to Exley to hear Isa Mujahid give the keynote address on Agriculture and Equity. Mujahid is the founder and director of CTCORE—Organize Now!, a non-profit dedicated to dismantling structural and systemic racism through tactical organizing efforts, training programs, and network building. Low-income people of color are the primary victims of corrupt food systems and climate change, Mujahid explained, so the corruption of our food systems and climate policies must be understood in terms of systemic oppression and violence. Narratives, he said, serve to make the unjustifiable justified.

“It’s really kind of disgusting that we have these narratives baked into our system [about] people who work with, from the folks that grow our food, to the people who cook our food and serve us our food, the people who put it on our plate, that they’re beneath us, that it’s okay to treat them like shit, that they exist to serve us,” he said. “And the same with the Earth and the environment that brings us this food, these narratives tell us that it’s okay to exploit beyond repair.”

Mujahid discussed how we can seek to dismantle exploitative food systems by tackling every link in the food chain, disrupting these narratives, and creating community ownership of our food systems. He soon opened up the room for discussion, encouraging attendees to talk about their own experiences.

“I’m genuinely excited about what’s happening in Middletown,” he said. “I want to build a movement to take ownership of our food systems, and I want this town, Wesleyan, to be a part of it.”

After the keynote address and subsequent discussion, people filed out of Tishler Hall to eat lunch and mingle in the Exley lobby. Soon, the attendees sectioned off into groups and headed out for their field visits of choice: Ferry Street Garden, Erin Street Garden, Forest City Farms, and Long Lane Farm. Each farm gave tours to their visitors, holding site-specific workshops and discussions. These field visits were an important part of the event model, Eck explained, as it enabled people to locate the events’ themes and discussions in something real and concrete.

“It sort of made the issue feel real, because you’re talking about like farming and Middletown and kind of these abstract ways in an auditorium with PowerPoints,” Eck said. “But then, you know, after you hear from these amazing speakers, you can kind of connect the dots by actually visiting these places and being like, ‘Oh, okay, so I just learned these really amazing concepts and then I’m seeing where they can actually be applied.’”

Upon returning from their farm visits, attendees reconvened in Tishler for the second round of programming, which included a talk about permaculture and a composting workshop.

The next morning at 9 a.m., a smaller group gathered in the conference room at the top of Albritton for one of the last items on the itinerary, a “Farming Assessment Workshop,” led by Bob Daniels, who sits on the City of Middletown Commission on Conservation & Agriculture.

This meeting provided an opportunity for urban farming advocates to think through next steps, brainstorming ideas for how some of the values discussed over the past day could be enacted and supported in Middletown.

“It was definitely a smaller group, but it was people who were ready to talk about what we can do with farming, and how to assess what even is going on with farming right now,” Hussain said.

With the help of Daniels, a government official, and a few pieces of poster paper and markers, the group worked together to clarify the present state of urban farming in Middletown and brainstorm various ways that the city government could support sustainable agriculture and community gardening efforts, such as tax breaks and subsidized organic farming. They hoped that the city might be willing to begin the project of creating a formal document to assess the state of farming and gardening in Middletown, and imagined together what that might look like.

When the symposium came to a close around noon on Sunday, Hussain, Leuchter, and Eck said that they believed the event was successful in that it brought people together for a conversation about how everyone can do their part to make Middletown’s food systems better and more sustainable.

“The event was really great in that I felt like it was really one of the first major collaborations between Wesleyan in the city government, at least that I know of,” Eck said. “The attendance was good and we were happy with it, but I was especially happy with who came, which was a lot of very dedicated people. Like I recognized a lot of people in the room and I know that they spend a lot of their time sort of volunteering or working within the realm of sustainability.”

Hussain agreed, emphasizing how the networking aspect of the symposium was just as important a take-away as the principles gleaned from the talks and visits.

“The turnout was great, but what I maybe appreciate even more is the connections we built between people,” he said. “I think dialogue and discourse and all that is really good to have, and I was glad we could have different perspectives. But I also like making actual connections, and putting people together who are working on similar things so we can help each other.”

Putting passionate people together in a room, Leuchter said, is only the first step, but she was glad to gather so many community members and looks forward to seeing the fruits of this conference in the weeks and months to come.

“Enacting change within a community is always difficult; there are interpersonal tensions, cultural divides, and bureaucratic obstacles that need to be addressed head on in order to gain any momentum,” she said. “The symposium brought all of this to light, and while we certainly have our work cut out for us, I’m optimistic that we’ll make substantial advancements toward local food justice as a result of our coming together this weekend.”