“Into the Image” Maximizes the Miniature 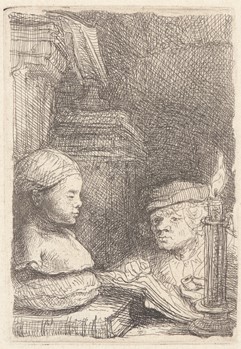 The exhibition “Into the Image, Art in Miniature Across the Centuries,” featuring a collection of miniature prints ranging in date from the 16th to the 20th century, opened in the Davison Art Center on Oct. 10. Similar in their minuscule size, the prints span countless genres and social settings, from the original German adopters of printmaking such as Albrecht Altdorfer to modern artists such as Henri Matisse. Each printmaker and genre is represented by an unfolding story of intricate detail, visible through use of gallery provided magnifying glasses. Together, the collection offers a unique glimpse into the tiny, infinitely complex world of the miniature.

“Starting in the 16th century on, they were relatively portable. They were easier to store, so you could look at them privately if they were a little bit sensuous,” Professor of Classical Studies and curator of the exhibition Andrew Szegedy-Maszak said. “[For this show] the thing that counted for inclusion was whether it was a small piece….  Some of them are really tiny, and they reward that slow, close scrutiny, you really lean over and use one of the magnifying glasses and just discover one fantastic little detail after another.”

Equally as fascinating as the stories they depict, the technical methods behind such tiny prints weigh heavily in the experience of this exhibition. Despite their seeming detachment from the process of creation when compared to, for example, an impressionist painting, details between works consistently evoke the role of their producers. Amazed by the closeness of lines and diversity of texture, a common question on opening night was “How did they do that?”

“In terms of the techniques featured here…There are engravings. There are very small wood cuts. There are some wood engravings which are different from woodcuts in that they are made on the end grain of wood with much sharper tools so you can get really fine detail,” Davison Art Center curator Miya Tokumitsu said. “There are a couple of techniques that are really loosely connected to metalworking and jewelry, specifically blackwork prints and niello prints. Those are both techniques that come from metalworking and metalwork production. In the late Middle Ages and Renaissance period, people discovered that it was possible to make paper prints from some of these goldwork techniques.”

Considering how these techniques arise from workmanship, one question I had when viewing an exhibition of prints was that of accessibility. As a medium that could be disseminated on a large scale, requiring a relatively small commitment of time and resources, prints seemed to be a key to reaching consumers in a wider breadth of socioeconomic distinctions. Across each work is the sense of replicability, one that, unlike painting, allowed a wider audience to access a rich aesthetic variety for the first time.

“Some people may be really refined connoisseurs. Other people maybe just enjoy bookplates or people still collect postcards, too. It’s not high art, but it’s still an aesthetic object that people appreciate and want to keep close,” Tokumitsu said.

In this way, despite being largely centuries old, the current exhibition plays neatly into the modern method of visual experience. Not only do we visualize the digital world through a small, sharply detailed screen, but we can all partake in creation and collection of its images. Just as 16th century Germans utilized the newly discovered process of printmaking, so do we engage in smartphone photo-taking, screenshotting, and posting.

Despite this saturation of digital images, though, there will always be a need for the kinds of physical remembrances displayed in the current exhibition. Esmė Sandercock’s “The Bathers,” for example, in which a mother washes her child, commands a unique sentimentality in its dark ridges and pervasive depth, which reveals itself despite being endlessly replicable. As you peer into the contours of such scenes, you will be inspired to abandon the kind of idle viewership you enact every day.

“Looking at works like this is such a great lesson for contemporary artists,” Tokumitsu said. “You don’t need much at all to make a really compelling piece of work. You don’t need a huge surface area. You can work in monochrome. You can do a lot with a couple of inches of black ink on white paper and that hasn’t changed.”