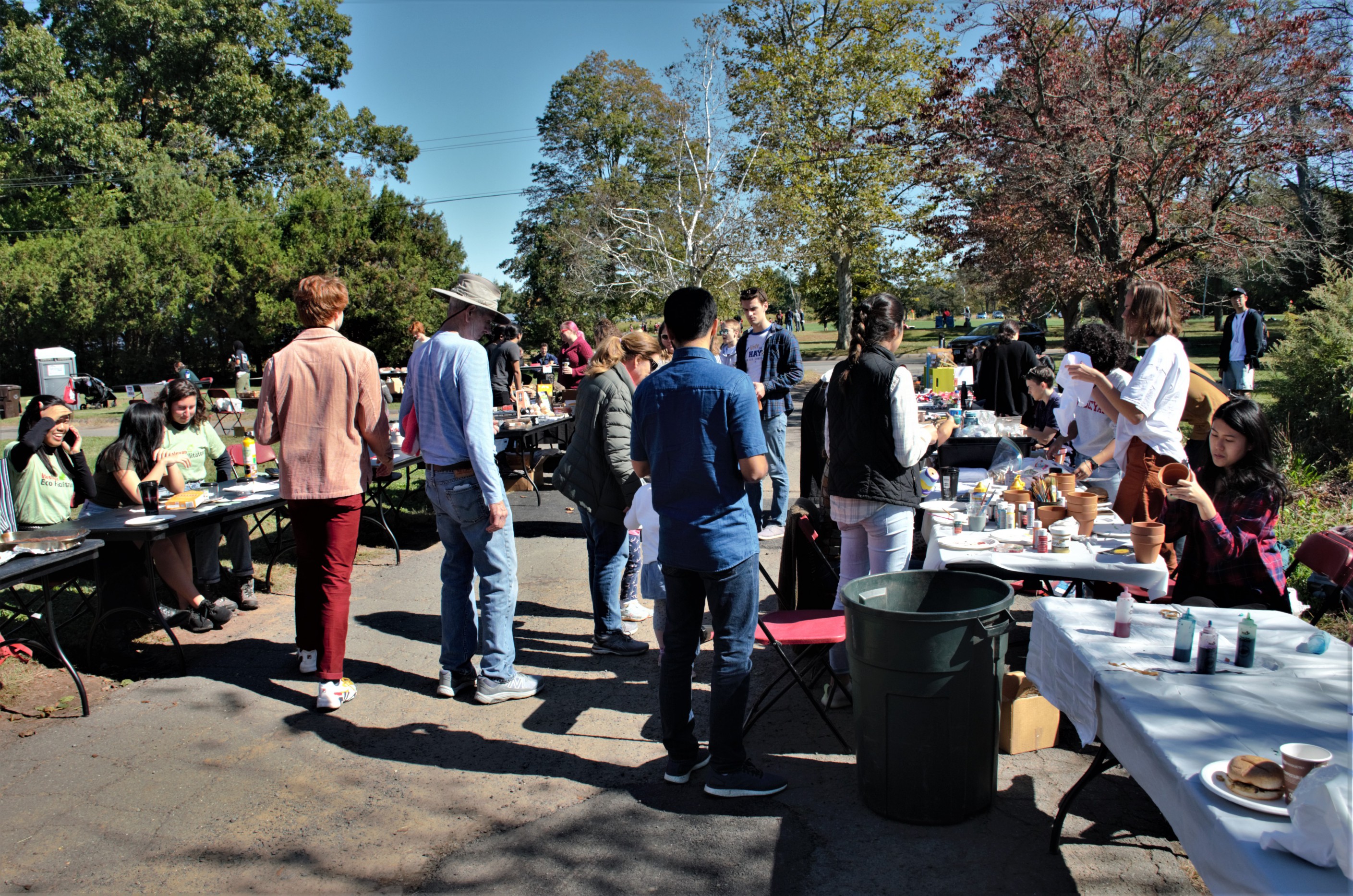 The University’s annual Pumpkin Festival, co-sponsored by the College of the Environment (CoE), took place this past Saturday, Oct. 5, at Long Lane Farm. An annual occurrence since its inception in 2004, the event celebrates Long Lane’s harvest and welcomes members of the community for live performances, free food and cider, and goods made by local small business vendors.

The Sustainability Interns operated the Sustainability Office’s table, educating passers by on what items to recycle or compost and handing out information sheets with general information on reducing energy use and consumption. Other tables operated by students had activities such as tie-dying shirts and painting ceramic pots, primarily run by volunteers that work on the farm. Throughout the festival, other volunteers gave tours of the farm.

Auntie Arwen’s Spices, operated by Jane Sibley, also known as Auntie Arwen, has been around for over 20 years. Over the course of her life, Sibley went from selling tag sale items, crystals, and tumble stones, to homemade spices and blends. She explained the philosophy behind her business and offering an alternative for consumers looking for spices.

“I love to cook, and I love to eat,” Sibley said. “And there’s so many people that are looking for blends. The stuff in the store, it’s such a limited selection…. I pack in heavy jars, and I also believed in packing full jars.”

A bake sale offering pastries like brownies and cookies was available for the duration of the festival. The proceeds from the bake sale went to the New Horizons Domestic Violence Shelter. According to Toner, the sale raised about $70 for the shelter. 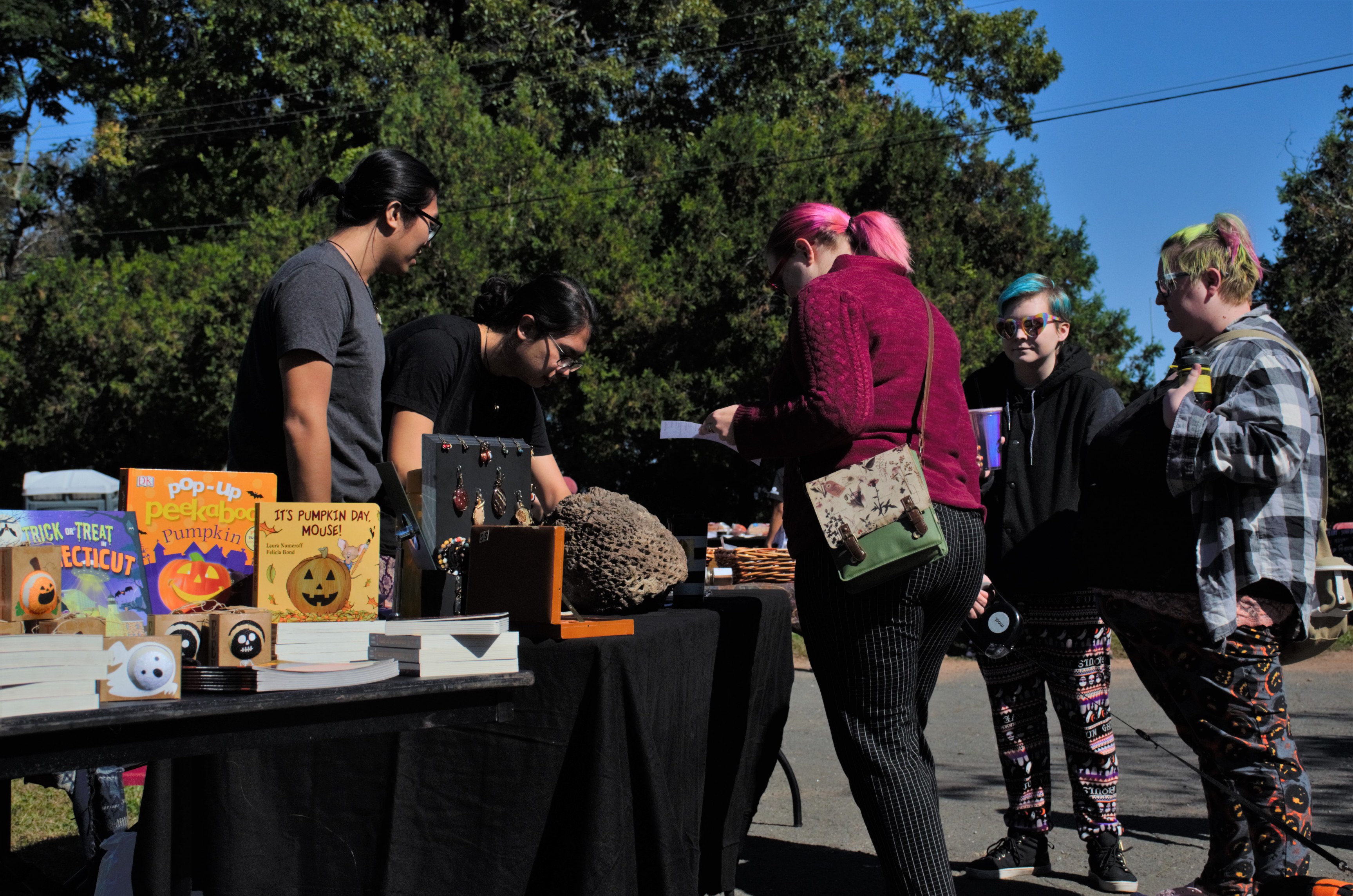 “We’ve had a relationship with New Horizons before, donating vegetables and having fun work days on the farm on occasion,” Toner wrote in an email to The Argus. “We haven’t been able to donate in to them recently, so this bake sale seemed like the perfect opportunity to send our support their way.”

Halfway through the event, organizers held a pumpkin pie eating contest, where students and community members faced off to see who could eat their slice the fastest. Winners were awarded books provided at the courtesy of the Wesleyan University Press.

Musical performances took place throughout the event, including the band Lopii, Iris Sackman ’22, Director of the CoE Barry Chernoff, Rebecca Roff ’20, and Skye Hawthorne ’22. Headlining the event was Middletown rapper The Ultimate Emcee Elvee, also known as Elvee. In a message to The Argus, Elvee explained his background and introduction into the music scene.

“My stage name has been The Ultimate Emcee since 2003,” Elvee wrote. “The way I would describe my journey making music…was all fun at first. Then frustration set in when I realized I was isolated living in Middletown…. Before the digital era, I had no way to promote myself and get heard. When I started to learn how to upload my music and send out to platforms things got easier and more promising for me. Then, I started getting booked more but everyone wanted me for free or wanted me to pay to play or perform. I got down with radio stations such as leafpileradio.com and wesufm.org allowing me to play my own stuff.”

He also wrote that he enjoyed the Long Lane performance and the positive feedback that he received.

“The highlights were when myself and Tommy Gunn were on stage doing [our] thing for the people who invited us there and when they told us we did a good job,” Elvee wrote. “And seeing people appreciate what we were doing is always great.”

Some of the organizers for this year’s festival commented on their favorite moments and what makes the festival special.

“[M]y favorite part was definitely the pie-eating contest!” Toner wrote. “Got to love watching people smash their faces into a pumpkin pie!”

Shuker-Haines spoke about the placement of this event in the wider Middletown community.

“I think my favorite part is that it actually does reach a really large portion of the Middletown community compared to a lot of Wesleyan-affiliated events,” Shuker-Haines said. “That for me is really important, because it’s really reaching out to the community, and it’s a fun event that people can bring their kids to.”