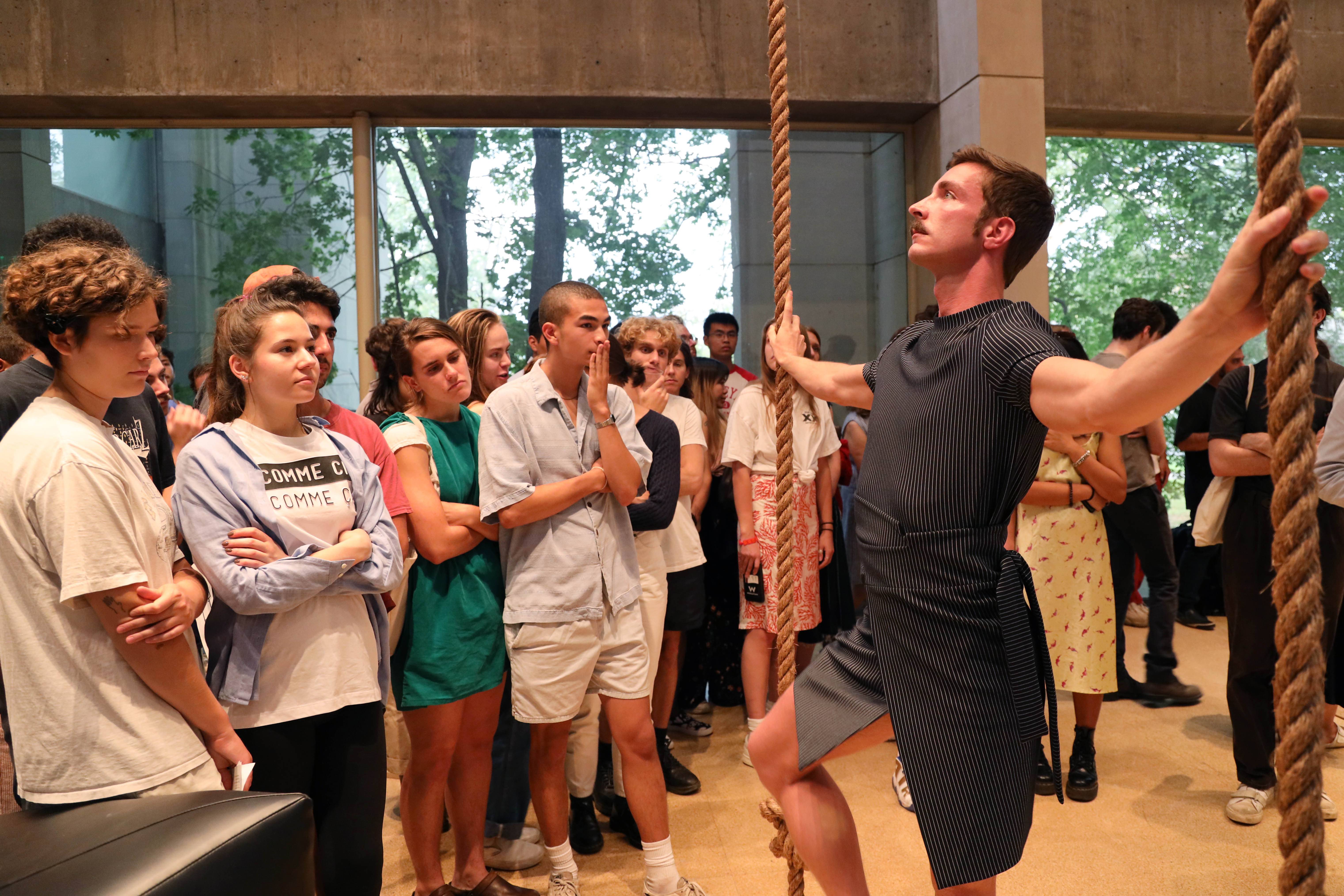 On Wednesday, Oct. 2, Brendan Fernandes’ “Inaction” transformed the Zilkha Gallery into a space inspired by the queer nightclub, in a temporal exhibition in which dance met visual arts. The dancers—including Fernandes and various Wesleyan students—moved through sculptural elements in order to recreate the atmosphere of a “daunting playground.”

Associate Director of Visual Arts Benjamin Chaffee noted that Fernandes’ enthusiasm for collaboration with Wesleyan student dancers was directly related to the poetics of the project.

“Coming from dance and even vernacular dance—he’s interested in dance parties, dance clubs as being a temporary meeting place, and having that openness and rootedness in the community,” Chaffee said. “I think he carries some of that into how he thinks about a gallery or cultural institution…to create a resource and temporary opportunity for a local community as well.”

Fernandes also collaborated on the exhibition with Chicago-based architecture firm Norman Kelley, who designed the sculptural pieces. The sculptures, which were referred to as tumblers, were large metal objects that looked almost like giant jacks, each with its own idiosyncratic design. Swings and ropes were also arranged around a circular rug lying in the center of the gallery, that was intended to remind the audience of a classroom rug and served as a meeting point for the dancers. Lastly, a three-dimensional grid, composed of thin pieces, lay low to the ground, creating a strange constraint for the dancers to amble in and out of. 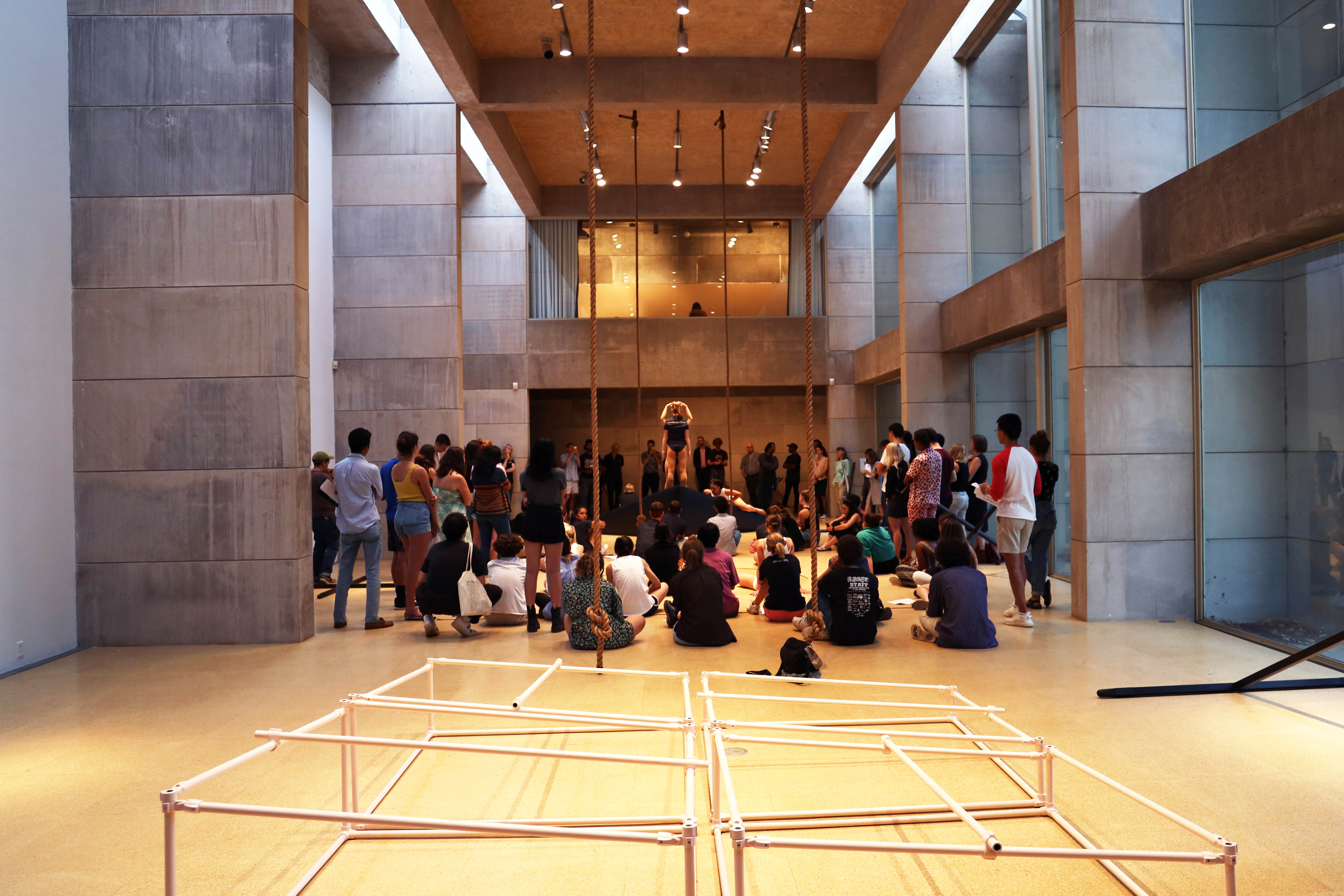 The performers moved in complete silence, with the straight lines of their stretches and preparatory movements slowly melting into softer shapes and figures.

“Inaction” played on the contrast between interesting interactions between the dancers, and moments of solitude, during which the dancers seemed to float until they met a partner, or didn’t. This choreography was intended to mimic the group dynamics of a club, in which groups and partners are continuously formed and de-constructed as the night goes on.

Structures were moved, turned, and rearranged to transform the Zilkha Gallery into a dance floor, with the cold atmosphere of the gallery’s architecture reflective of the stillness and stoic gaze of the performers, and their very modernist and non-gendered costumes. Without a stage, the audience stood on the dance floor, could walk around as they wished, and were invited to brush past the dancers. This participation was somewhat voyeuristic due to the unusual physical proximity, though the audience respected the separation from the performers. 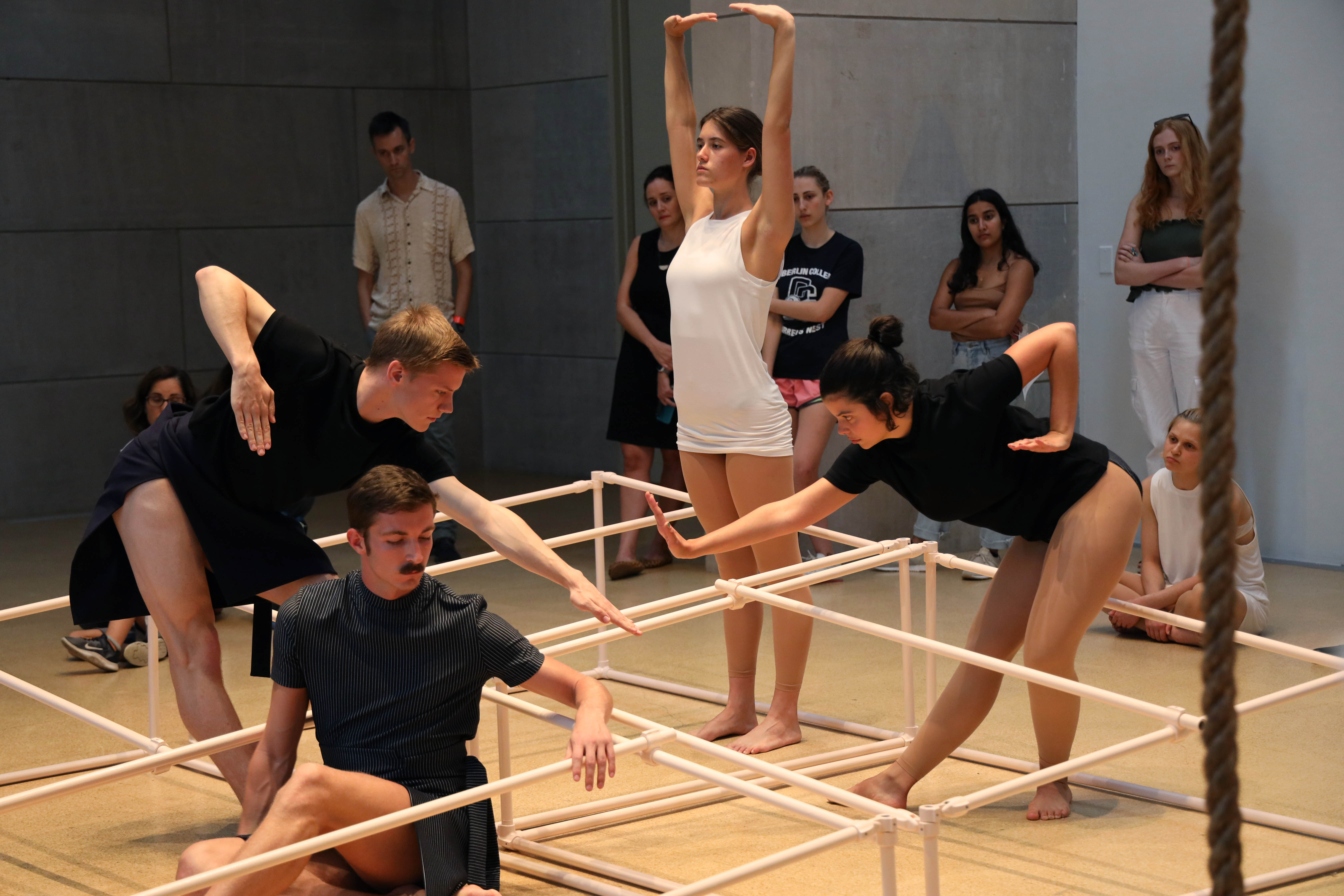 At times, the piece was literally difficult to see, with the large crowds of spectators making it impossible to get a good view of every dancer at a given time. This too, was intentional: a reflection of Fernandes’ thinking on the complex dichotomy of the importance of visibility to queer and other marginalized communities, and the simultaneous danger that comes with hyper-visibility in certain environments, especially in Fernandes’ identity as a queer person of color.

“For certain queers, being visible is a really important thing,” Fernandes said. “You want to be heard, you want to be seen, but for me there was also this idea of not always wanting to be seen, so in this work I try to think about how invisibility also becomes a powerful space to exist in and a space of empowerment. A lot of the things I asked the dancers to do in this piece were to be invisible, to hide in this space, to find out how you become engaged in a space you are also hiding in, since hiding is also a means of feeling disenfranchised.”

Slow crawling and at times almost imperceptibly subtle movements punctuated the show, while leaving room for long pauses—Fernandes spoke of “active stillness”—moments when the dancers were motionless, yet appeared to be under strain, remaining strong and vigorous in their presentation.

“A lot of [the choreography] is also based on the notion of being still, on stillness as a sort of empowerment, of being an active strong body in being still as well,” Fernandes said. “Dance is always about movement, but I truly challenged the dancers to find dance in stillness. Those words are so beautiful to me—‘be still’—be collected, be conscious, but it’s definitely a challenge.” 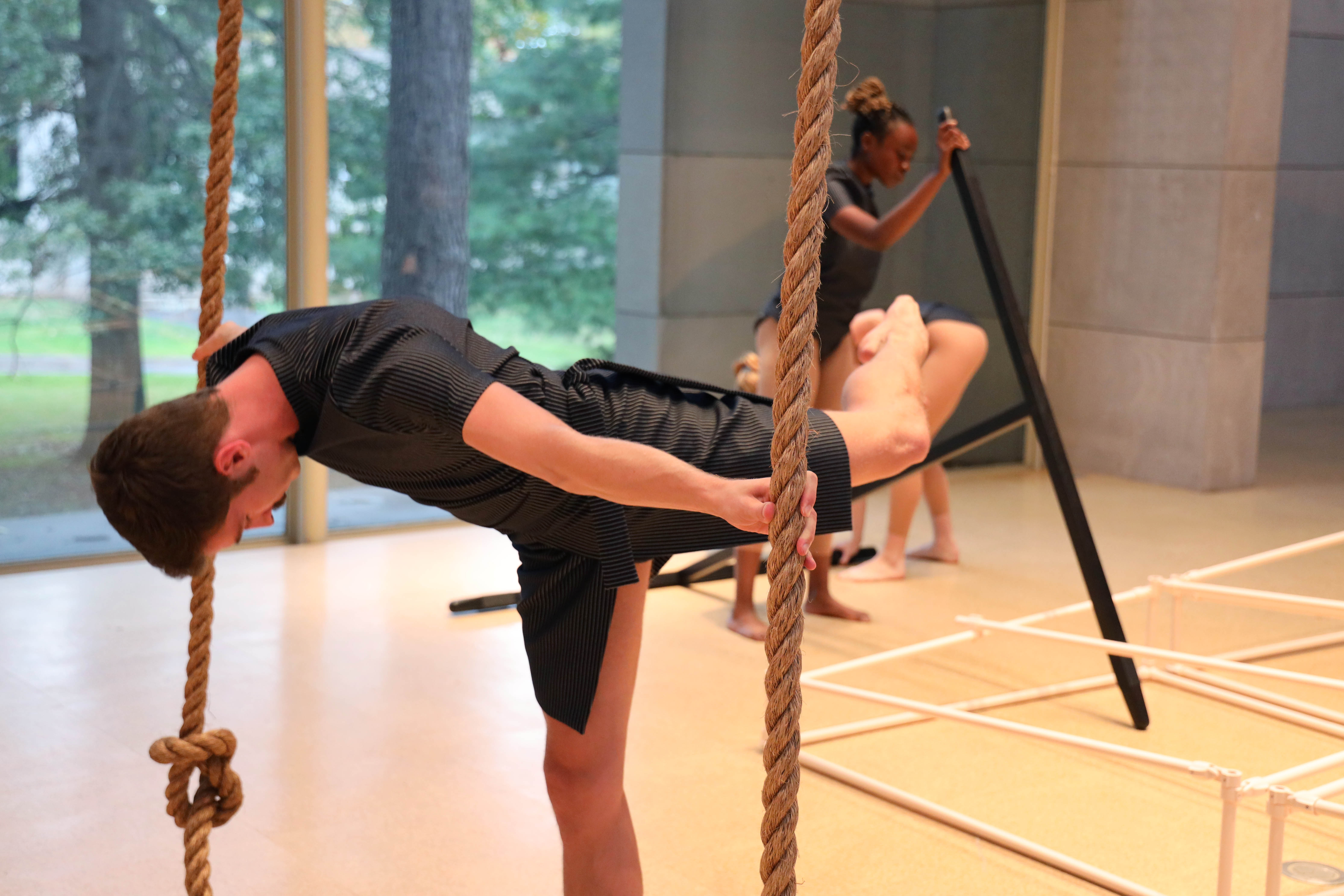 This concept of stillness is echoed in the title of the show, “Inaction,” which refers simultaneously to the concept of no actions, or motionlessness, and to the idea of movement—being “in action.” Fernandes noted that stillness could also be thought of as a political philosophy; an anti-capitalist action that calls for a radical notion of care—not as in the white-feminist notion of “self-care,” but as in the Audre Lorde sense of “self-preservation…[as] political warfare.”

“If you are constantly moving, constantly in action, you are being efficient,” Fernandes said. “Stillness is a privilege for sure, but also one that we need to grace by also being active—when the dancers are standing still, they are still performing, they’re not lazy, they are still active, still being productive.”

Additionally, Fernandes presented a video work entitled “Free Fall,” which was inspired by the aftermath of the shooting at Pulse, a predominantly Latinx gay nightclub in Orlando, Florida. The single-channel video piece examines “the choreography of falling, the accidental fall on stage, the fall that alters the body, or the last fall that a body takes.” The video features several dozen dancers, who variously meander around casually, and perform highly choreographed actions. The piece seems to comment on the difficulty of responding to traumas such as Pulse. At some times, the dancers seem to look almost voyeuristically at those who have “fallen,” while at others, they band together in a tight-knit circle, leaning on each other with a seeming emphasis on interdependence and care. Throughout the video, the bright, cinematic lighting and highly reflective floors serve to give the scene a club-like atmosphere. This not only echoes the setting of Pulse itself, but serves to point to the idea of the nightclub as a space of queer community, care and friendship; beyond the club’s most obvious role as a cruising venue. 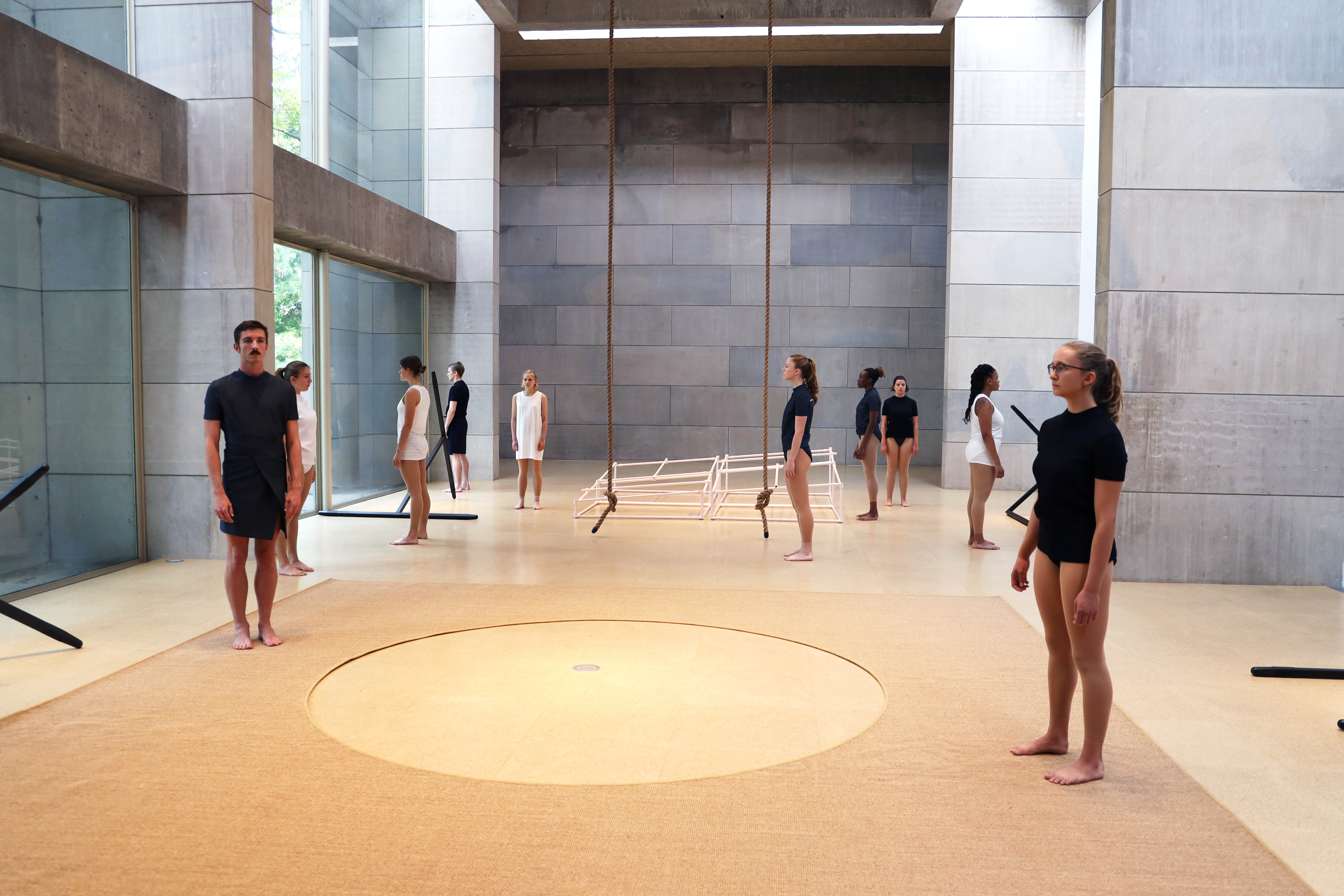 Both “Free Fall” and the dance performance also directly addressed the constraints of the professional dance world, especially ballet, and the similarities that Fernandes sees it sharing with masochist communities in the rigor and sacrifice that it demands of dancers. Fernandes, who was classically trained in dance, aimed to challenge the conventions of this world by revealing the pain with which classical ballet training is imbued, and by suggesting alternate forms, ones which might bring more of the pure joy that one might experience dancing in a club with friends.

“How do I un-dance dancers who are trained?” Brenden said. “I started thinking through this idea of a playground. This [space] becomes a playground for the dancers and some of the strategies they use to move are based on children’s games—hide and seek, tag, calls and responses.”

This playfulness certainly comes through, and is complemented by the depth of the underlying message carried in the structures, moving images, and the dancers’ outstanding performances. 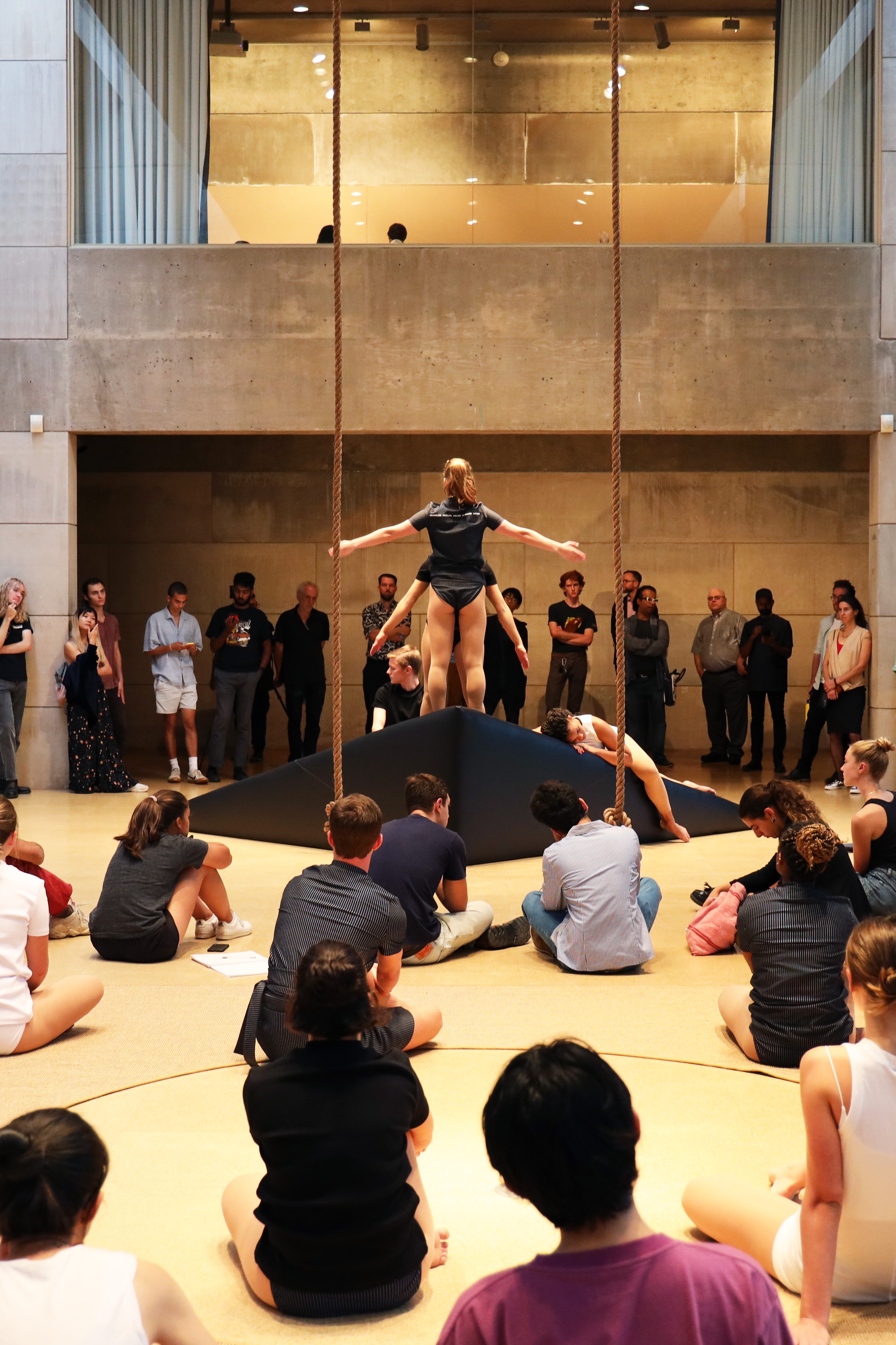 The exhibition’s performance schedule is as follows:

All performances are free and open to the public. Dancer Charles Gowin will participate in some of the performances.