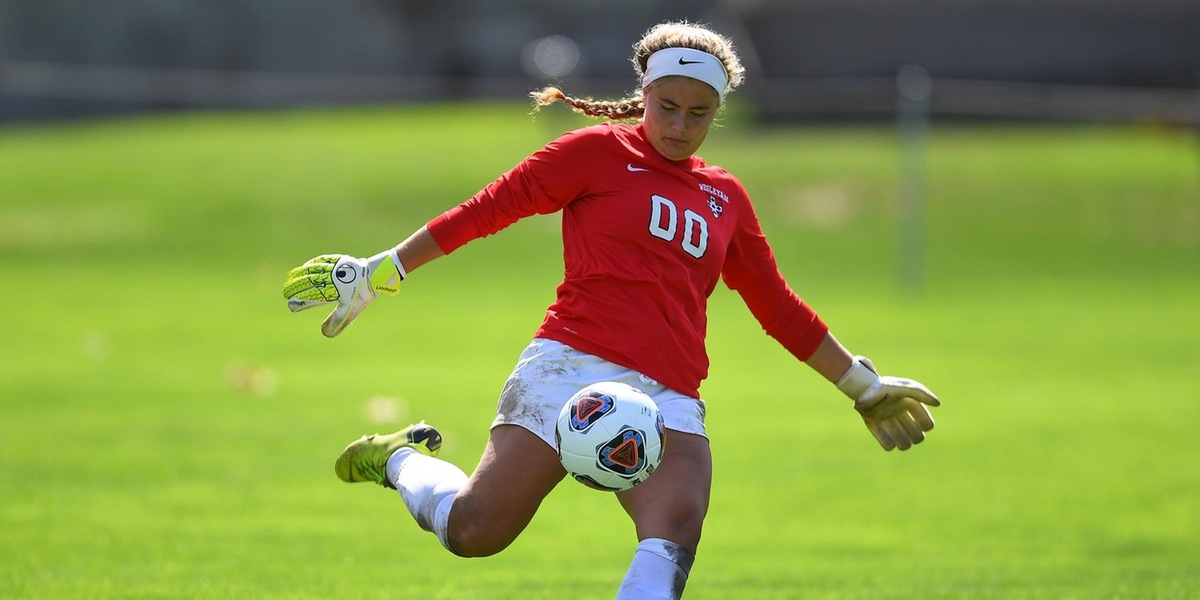 The women’s soccer team tied the program record for its longest undefeated streak at six games after a win over Bowdoin, a tie against Colby, and a win over the Coast Guard Academy.

Last Saturday, in their first road game of the year, the Cards beat Bowdoin 2–1 in a closely fought game. In the first half, the Red and Black got off to a good start as Grace Devanny ’23 scored the opening goal just under 20 minutes into the game, putting the team up 1–0. But Bowdoin came back and scored only 11 minutes later to knot the game up at 1 and close out the half. The second half was a tough battle as both teams had chances to take the lead but could not convert. Finally, with three and a half minutes to go, Devanny scored the game-winning goal, her second goal of the game, to put the Cards ahead for good as they secured a crucial road victory.

Throughout the game, Wesleyan had the advantage in shots 11–7, with Devanny having the team lead with four. On the defensive side of the ball, goalie Sarah Hammond ’22 made three crucial saves.

The Cards then had a quick turnaround with a game the following day at home against Colby, where they drew 0–0. Despite there being no goals, Wesleyan had opportunities. The Cardinals outshot the Mules by a wide margin of 20–8 and had multiple chances either go wide or go off the post. Audrey Lavey ’23 led the offensive effort with four shots. At the other end of the field, Hammond made seven crucial saves to keep the game scoreless.

Despite not conceding any goals, the Red and Black didn’t come away unscathed from the game; Devanny went down with a wrist injury in the second half. The injury was not serious, though, and she’ll be returning to action this week.

After the 1–0 weekend in conference play, the Cards headed to New London for a midweek non-conference clash with Coast Guard Academy. Wesleyan took care of business, winning by a score of 2–0. The Cards came out on a strong note, as they often have this season, with Lavey scoring her first career goal just over 20 minutes into the game to give her team the 1–0 lead. Lavey then added a second goal early in the second half and the Cards closed out the 2-0 victory. Despite the score line, Coast Guard actually had more shots than Wesleyan, but Hammond made five saves to deny them any goals. The victory over Coast Guard pushed the team’s record to a stellar 5–1–1.

Captain Julia Meehan ’20 was pleased with how the team has looked its last three games.

“The team has looked pretty solid the past three games,” Meehan said. “Our defense has been very strong, only allowing one goal in those three games. We’ve been dominating possession in each game, so now we’re working to build upon that possession in the offensive end and create more chances.”

Meehan also attributes the consistent play thus far to the high standards the team expects from themselves each game.

“I think the key to remaining consistent as a team is to hold the same standards for each game,” Meehan said. “I think our coach said it best by saying the tie on Sunday felt like a loss, and that’s definitely different from previous years. We are no longer content with just being decent, in the middle of the NESCAC. We want to be at the top, so having that standard as a team and going into every game with that mentality no matter the opponent is definitely key to being consistent.”

Next up, the Cards take on Emerson at home on Tuesday before two key NESCAC games this weekend, going to Amherst on Saturday and returning home to face off against Tufts on Sunday. Both Tufts and Amherst have good records this year but are behind the Cards in the NESCAC standings, so getting good results will be pivotal to the Cards remaining near the top of the standings.

Meehan says having gone through the last doubleheader last weekend will help the team going into another tough back to back.

“We’re playing tougher teams this weekend, but knowing what the doubleheader entails both physically and mentally definitely helps us be ready to compete in both games,” Meehan said. “We will need to put together our best soccer to come away from this weekend with the results we want, but the previous practices and games have definitely prepared us for this.”