One Day Plays Return (Messier Than Ever) to Wesleyan Stage 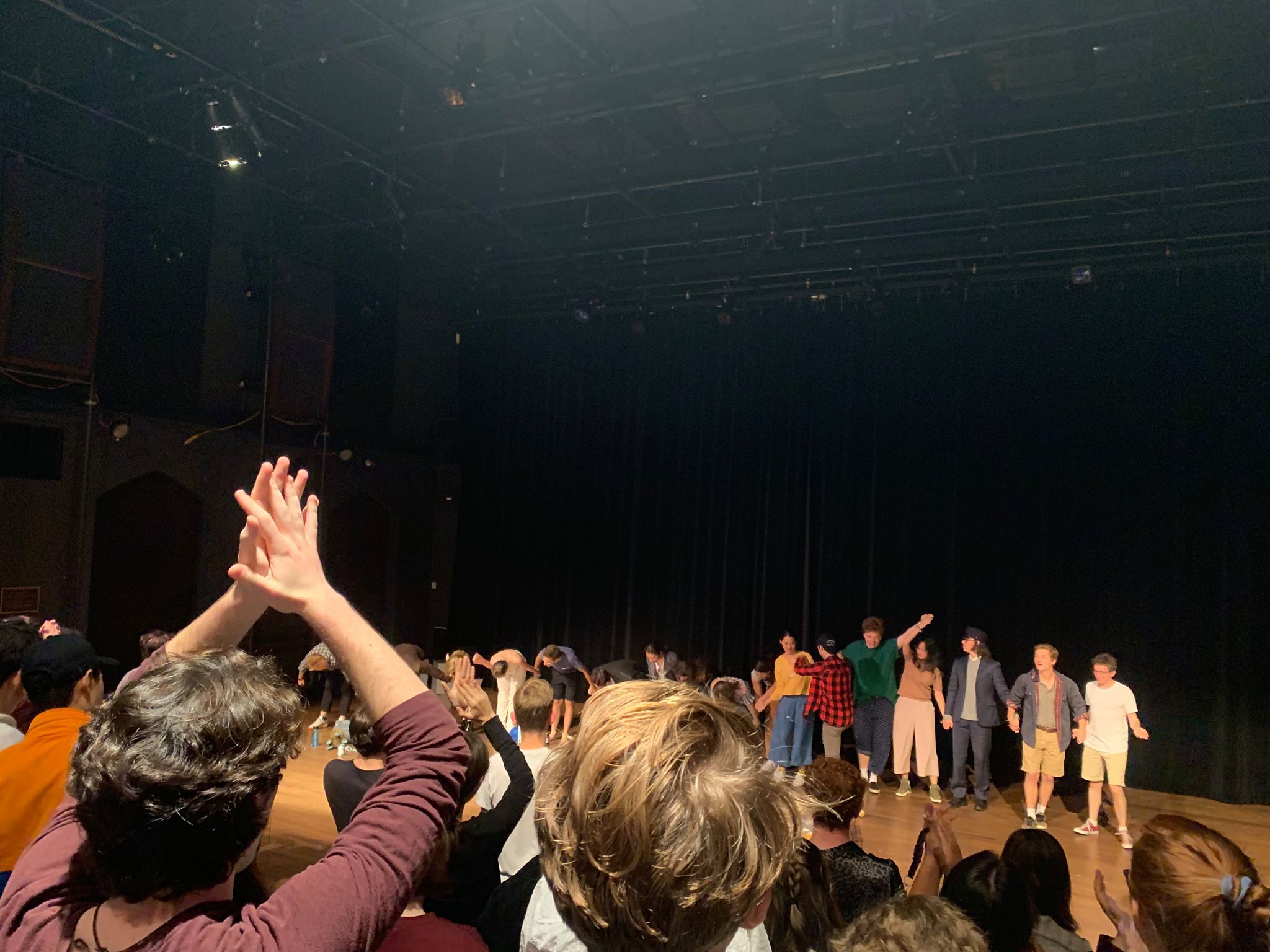 “This is going to be a shit show,” Pryor Krugman ’20, one of this year’s One Day Play “overlords,” yelled to an eager crowd.

The audience had just sung through Smash Mouth’s “All Star” and Journey’s “Don’t Stop Believing”—the “Glee” version, notably—and was ready to see seven separate productions, all created within a span of 24 hours.

Krugman’s words certainly fit the bill. What ensued in the next hour and a half was a range of chaotic works on the ’92 floor. The stage opened with a couple that had stopped on the side of the highway for a pee break with an unlikely stranger. Next, an angel and devil, playing cards, decided a man’s fate. Afterwards, a man fulfilled and undid his prophecy (honestly, I didn’t really get this one). Then, a “true American hero” seized his musical moment with the rest of the world; next, a vlogger spread words on YouTube; then, Michael Roth ’78 begged Lin-Manuel Miranda ’02 for popularity tips. Finally, two small men learned to love.

Some productions took the absurdity of the day’s event and infused it into their work, aiming for humor rather than sense. The actors in these pieces took their work in stride, impressively refusing to break character even when the audience cut off the following lines with laughter.

Others were philosophical. They packed life’s deepest questions into about 10 minutes. Students in the crowd were shockingly silent in these moments, perhaps contemplating the deep and murky issues such short pieces of work could bring to the table. When does someone deserve to die, if at all? Who decides what a “good person” looks like? What responsibility do we have to our country? And perhaps most importantly, where do beans come from?

Some were political, some more blatantly than others. There were 30 seconds of uninterrupted political commentary by a true American hero. Two productions later, Roth complained about divesting from fossil fuels and hiring more custodial workers.

As the productions changed from uplifting to depressing, nonsensical to deliberate, and funny to completely missing the mark, the audience stayed consistently engaged. An overwhelming eruption of applause and cheers followed every production, and was even sprinkled in during the performances. Students snapped when they agreed with a particular poignant point, or leaned over and whispered to their neighbors when they couldn’t understand what was really going on (Was there really anything going on?). They screamed their friends’ names when the actors came on to transition sets before their performance. They screamed the same names when the lights went down on the production, too.

This supportive environment might be one of the most redeeming qualities of One Day Plays. If you’re going to put together a piece of theater in 24 hours, you’re not looking to write the next “In The Heights.” (Little known fact: “In The Heights” was actually written and first performed on the University’s campus.) One Day Plays encourages everyone to participate, whether they’ve been in the Theater Department productions or have never read a script before.

“It was really incredible to see so many first time actors, directors and writers absolutely throw themselves into the world of theater!” Matt Grimaldi ’21, one of the event’s overlords, said.

Experienced and inexperienced actors, directors, and writers alike might have created chaotic works, but they were by no means lacking in production value. Each skit used props to set the stage, ranging from a bottle of liquor to a couple of menstrual pads. Actors were adequately dressed; particularly memorable were God’s white jumpsuit and Death’s tight black dress and red boa from “God and Death Play Cards While Waiting for Someone to Die” (adequately named, too). The lighting was one of the most impressive design elements. Each production had its own lighting design, fit with special spots, colors, and (mostly well-timed) cues.

Even with the jokes that didn’t quite hit the mark, the times actors fumbled for lines, or the moments of natural and utter confusion, One Day Plays remained a wacky theater experience that brought a community together. What ended up on the stage didn’t matter as much as the people who worked to make it happen (on little sleep, hungover, and even struck by the WesPlague).

Grimaldi, who has written and acted for the event for over half of his University career, put it best.

“Seeing the delirious passion of a group of overtired artists trying to pull off an insane feat is an incomparable experience,” he said.