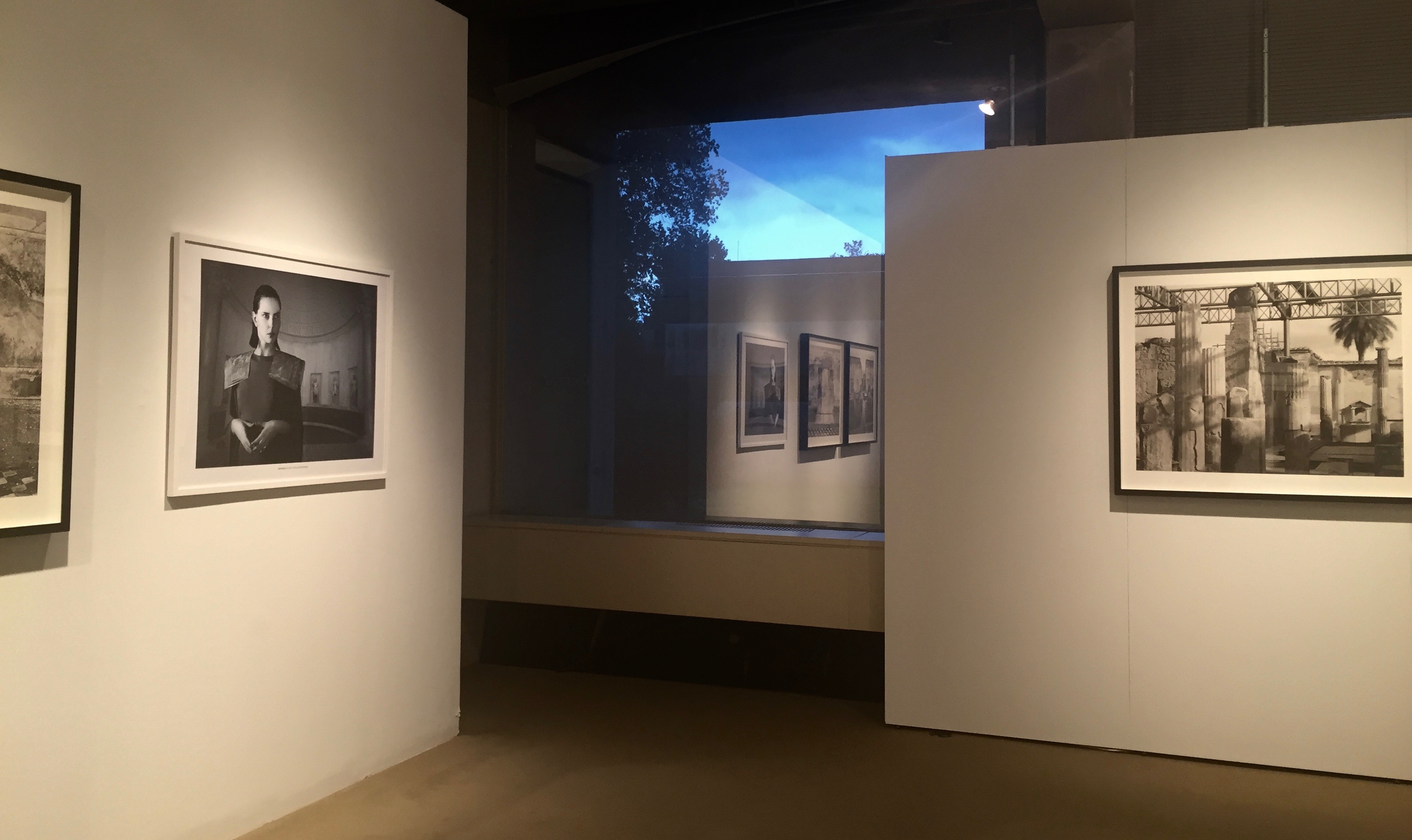 The exhibit “Urban Space, Roman Culture and a Living Past: Views of Pompeii and Pantheon,” featuring a collection of photographs by William Wylie and Marc Erwin Babej, opened in the South Gallery wing of Zilkha Gallery on Sept. 10. Although consistent in their use of black and white, the photographs differ greatly in their approach to Roman subjects: William Wylie surveys the buried ruins of Pompeii, while Marc Erwin Babej captures ultra-sharp portraits of modern subjects in Roman contexts. The meticulously measured and researched effort comes together to create an elegant visual experience.

When I first walked through the exhibition, taken aback by the crisp beauty of the photographs, an initial question was “Why?” Apart from its enduring beauty, what could be the artists’ reasons for revisiting such a familiar subject, the remnants of which still course through popular culture? Wylie, an accomplished photographer who heads the Studio Art Program at the University of Virginia, was clear in his goals.

“[Wylie] fell in love with the work of this 19th century photographer…and the original project was to do re-photography, which is to go back and to try to recreate the views that [he] had made in the mid 1800s,” exhibit curator and Professor of Classical Studies Andrew Szegedy-Maszak said. “But he rapidly decided the hell with that, he wanted to do something different.”

The result is a collection of timeless scenes that combine the seeming objectivity of early photography with the diligent sharpness of modern cameras. This practice of imbuing familiar subjects with a tasteful modernity is a familiar one to Wylie. Before receiving a fellowship to photograph Pompeii, the artist executed a series on Carrara, the famous Italian white marble quarry, in which stillness and timelessness breathed new life into his subjects.

“He actually uses what is a much more traditional technique,” Szegedy-Maszak continued. “He uses what’s called a view camera, which is one of those big cameras, where you pull the cloth over your head and you use what’s called a ground glass, and one of the reasons the photographs have such a tonal range [is because] he spent a lot of time studying the buildings he wanted to photograph in different lighting situations, and it paid off.”

Babej’s intentions are somewhat harder to discern. The photographer’s work is more reminiscent of a fashion shoot, borrowing Roman motifs for aesthetic purposes. His models are stoic and foreboding, like Roman statuary. His backgrounds contain sleek columns and decadent domes. 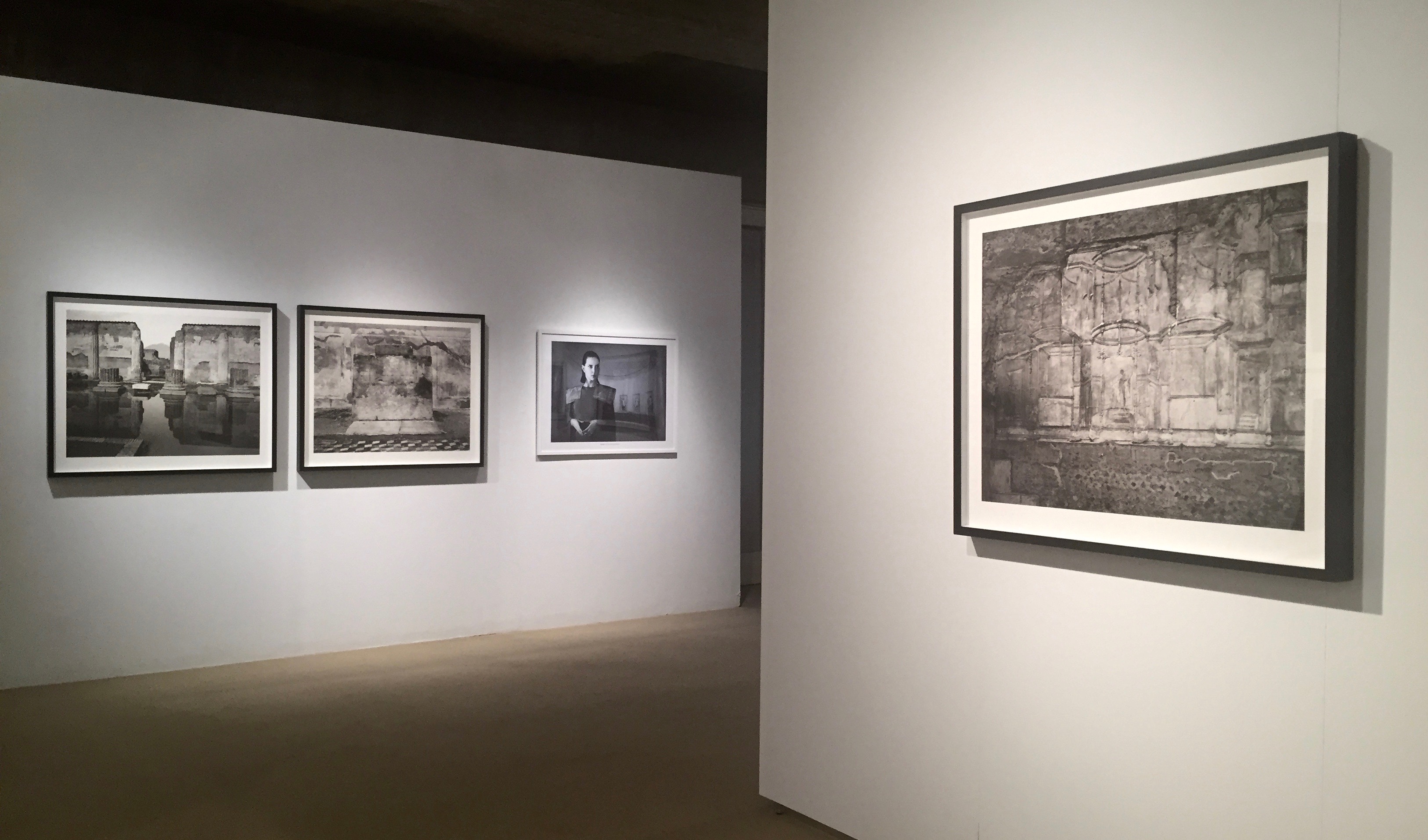 “[Babej] has a real team,” Szegedy-Maszak said. “He thinks for each image from antiquity, either historical or mythical, ‘This would look good.’ Then he takes those, and with the computer, he sort of blends them digitally into these reconstructed buildings in Rome. Several of them are from an imperial villa near Rome called Tivoli.”

Babej has since used computerized processes in a 2017 project called “Yesterday-Tomorrow.” The artist worked with digitally reinvented Egyptian hieroglyphics to make pointed, legible statements surrounding propaganda, colonialism, and xenophobia. In surveying the works on display at Zilkha, which were developed before “Yesterday-Tomorrow,” such clear political intentions are not on display. Like the Latin words that grace the bottom of his frames, Babej’s expressions may be difficult to read.

Yet the two artists nevertheless come together to create something delightful. As Szegedy-Maszak stressed in our interview, this was a group effort, a visual treat meant to demonstrate the beauty of collaboration. This point is exemplified by two pictures from the collection, Babej’s Magna Mater in Thermis Minoribus and Wylie’s Walls [Pompeiian building] which go together shockingly well. The figure of the model in Babej’s photograph seems to fit neatly into the unshadowed foreground of Wylie’s, the curve of her leg mirroring a crack in the Pompeiian wall. Like these two compositions, the show as a whole synthesizes its parts effortlessly, offering a refreshing view of antiquity that is sure to please.

The exhibit is on display through Sunday, Oct. 6 at the Zilkha Gallery.

Correction: The Argus has removed a sentence that asserted that computer retouching was thoroughly utilized in Babej’s process, and a portion of a quote that indicated the costumes in Babej’s images were not authentic, as it misrepresented the artist’s practices. The following paragraph was modified to clarify that Babej’s “Yesterday-Tomorrow” project was created before the pieces on display in the “Urban Space” exhibit.