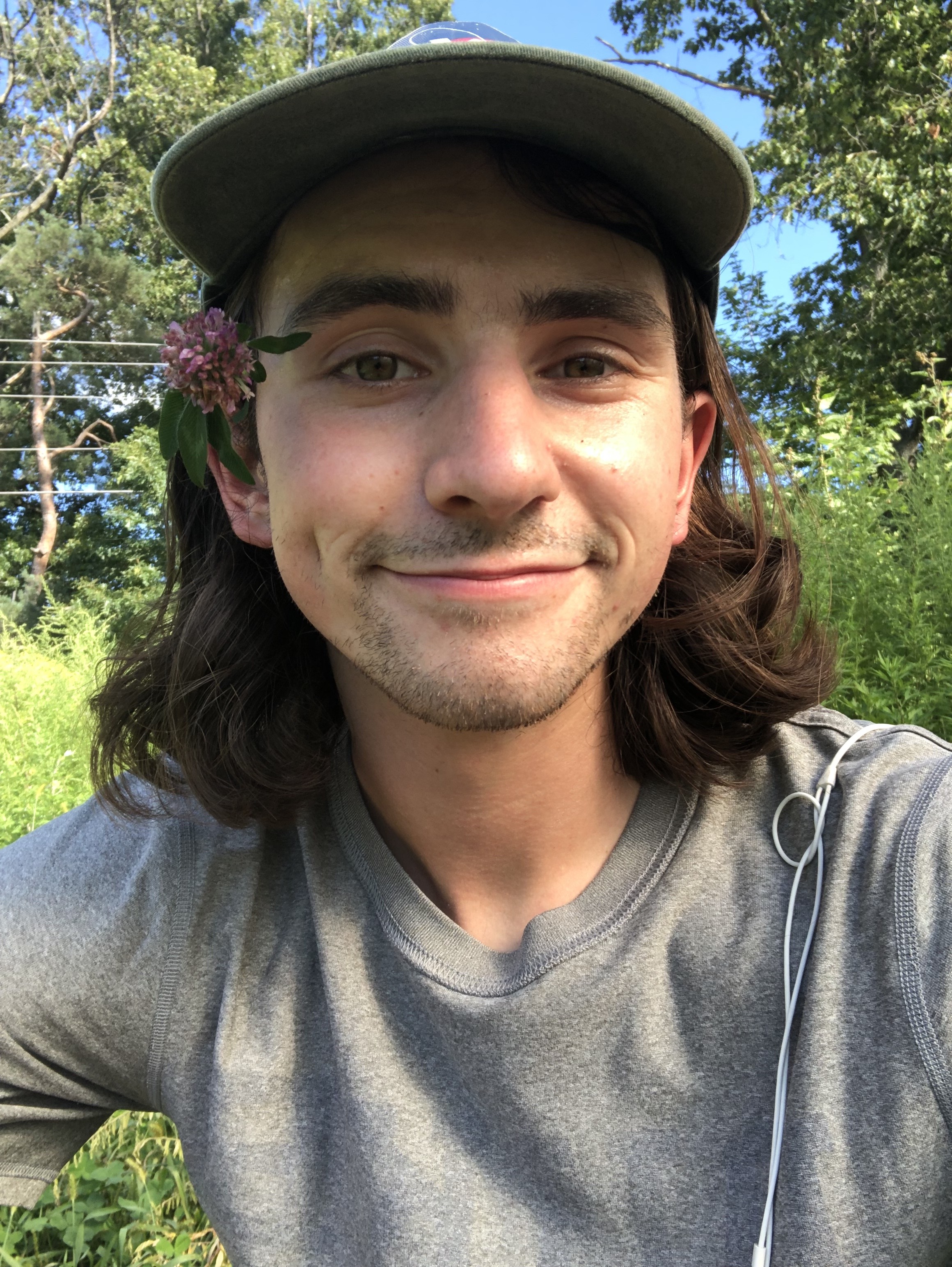 When Miles Brooks ’20 came to Wesleyan, he expected to double major in Theater and Physics. During his first year, however, he found himself drawn to environmentalism on campus, getting involved in groups like Outing Club, Climate Action Group, and Long Lane Farm. Through these endeavors, he discovered a passion for the environment and made a complete 180 turn, switching to a double-major in the College of the Environment (COE) and Earth and Environmental Science. The summer after his freshman year, Brooks received a grant from the COE to learn about beekeeping in Jamaica, and used this knowledge to help revive the beekeeping club when he returned to campus. Despite the major switch, his theatre legacy and penchant for performance live on in his WESU show, “Jazzalicious Definition.” Most recently, Miles helped organize the Sept. 20 climate strike on campus. The Argus got the chance to sit down with Miles—sans shoes, in an Allbritton hallway—and talk through his time as a Wesleyan student.

The Argus: Let’s start with the climate march. How involved are you with it, what is your role there, and how did you get involved in general?

Miles Brooks: The climate march was something we thought of—I’m a part of a student group called Climate Action Group—and basically we do climate-related stuff on campus and in Middletown. The original idea was to do kind of a parallel strike to what happened in Hartford and New Haven. We wanted to do one in Middletown. But then we talked to some people who were going to Hartford, and we didn’t want to detract from people who were going to Hartford. But we still wanted to engage with students who were going to be on campus and put them into motion. So, we decided to have a strike on campus. Myself, along with this whole group—there’s like six core people who are really behind it—decided to get some speakers together, to make posters, to do a rally. We walked around campus, went inside South College, and just made a lot of noise, got the attention of the administration. We wrote a whole bunch of letters to Michael Roth and left them under his front door, which he hasn’t responded to yet.

A: Have you gotten any kind of response from the administration in general?

MB: We haven’t. So, our idea is that we really don’t want this to be a one-off thing. We’re trying to enact change and so we’re gonna follow up that strike, potentially with a strike this Friday or with more future actions.

Editor’s note: Since this interview took place, Roth responded to demands made during the climate strike in a blog post.

A: How long have you been a part of that group?

MB: Since freshman spring. It was like two or three seniors who were part of it the year I joined—myself and three other freshmen—and we weren’t really doing anything and then the seniors left and it was just like a year of trying to figure out our place on campus. We started hosting events, movie screenings, panels with teachers and researchers, all-around climate issues. We got involved with the Middletown Planning and Zoning Committee and then doing small actions on campus, whether that’s working with Physical Plant or working with students, just trying to raise awareness.

A: Your nominator also mentioned beekeeping. What’s up with that?

MB: Summer after freshman year, I got a grant from the College of the Environment to do basically anything environmentally related. I was interested in bees, just as like, a cool helpful part of the environment, but also as an environmental justice thing, because the bees are dying, which means there’s going to be less food available, and then like, who’s not going to have food? So I spent seven weeks in Jamaica learning how to bee-keep from these farmers who just had like 80 hives and a couple different properties. I ended up spending a hundred hours learning to bee-keep. I got 62 stings over the course of those seven weeks. I learned how to make hives, and how to process honey, and make lip balm and stuff out of wax. It was just really awesome. And then, when I came back I was working on Long Lane Farm and I was like, “I think it would be really cool to have bees.” And there was a beekeeping club, and there were a hive of bees maybe six years ago, so like right before I came to Wes. They died over the winter, so two seniors reached out to me to help provide that, and we got a couple hives of bees back on Wes’ campus. I took care of them last summer, but then they died again in the winter. It was a bummer.

A: What do you want to do [after graduating]? Just wondering.

MB: In general like afterwards? I definitely want to continue with environmental activism and just help people change behavior and change systems in order to prepare for catastrophe or climate change and this crisis. I have a lot of hope, I think that change can happen, but I think it needs to happen faster. I’m still trying to figure out how best I can put myself into that, whether that’s through direct community work or more of the policy side or local government, something like that. I don’t know, but definitely people and the environment.

A: Two important things, for sure. To pivot completely, you have a WESU show?

MB: Yes, yes I do. My friend Leo and I, we’ve had the same show since sophomore spring. It’s usually been like late nights on Thursdays. We just play jazz, R&B, soul. It’s called “Jazzalicious: Definition,” a reference to “Fergalicious: Definition,” and it’s a great time. I love music, I’m always listening to music and trying to find new music so this is just like an outlet of, I get to procrastinate by putting together a playlist every week, and then spend an hour in the studio, it’s pretty low commitment. But then I’ve also been doing this show called Middletown Youth Radio Project where we reach out to kids in the neighborhood and bring them on air and teach them how to work the soundboard and play records and CDs and have them just like talk live into the microphone and do fun stuff. It’s a great way to know the people around Wesleyan and know the Middletown community better. I think something I’ve gotten to know better as I’ve been here is just how cool of a place Middletown is and its people. There’s some really awesome people here. Bridging that gap from like, the campus on the hill to the people who live here when we leave after four years is really cool.

A: I’ve heard some things [about how] activism isn’t what it used to be here and as a population we aren’t doing enough about climate activism—what would you say to the average Wesleyan Student?

MB: I would say, get involved and get out. Your voice is a lot stronger than you might think it is. I don’t know about what past activism was like, I can’t speak to that, but definitely things are kind of tame and quiet and we need disruption because somebody’s going to face [climate change] eventually—it might not be us, but big effects are being felt across the world, so we need to speak up for the people who don’t have as much of a voice. Wesleyan’s campus is like a very small microcosm of what is actually going on, and I can understand maybe some critiques of being like, “Oh, it’s not that big of a deal what Wesleyan does” or “Pressuring Roth isn’t the right way to spend our time,” but I don’t know. Like, once I leave Wesleyan, I’m not going to focus on Wesleyan anymore. I’m going to fight the bigger fight, but I feel like I want to see more involvement and more people. Whether it’s environmental stuff, but there’s also a lot of other things like worker’s rights and social justice that I feel like we as students are being educated on, but don’t see practiced at even our own University.

A: When you leave Wesleyan, what do you hope people will remember about you?

MB: Woah. I don’t care how people remember me, but I hope the same energy and urgency for action continues. And also, I want to see the farm and Outing Club really continue to thrive. Being involved in Outing Club, I got us a bunch of gear from the SBC [the Wesleyan Student Assembly’s Student Budget Committee] and I’ve been leading backpacking trips and stuff like that, so I want to make sure people still have that outlet. And the farm is just an underutilized resource and we have so much space and we grow a lot of good food but there’s just not that many people, especially this year, that are consistently working. And I just want to make sure that continues and does well.

A: What advice would you give to yourself as a freshman, and then to freshmen generally?

MB: I think probably similar advice. Freshman fall, I was a little timid about getting involved in things and overcommitting—which is probably a good hesitation because now I’m way overcommitted—but I also think: Don’t hold yourself back. There’s so many opportunities at this school to take advantage of, and this is the only time you’ll be surrounded by so many people your age with so much creativity and energy. Take advantage of that. What plays into that is say yes as much as you can. I’ve had so many fun times where I’m like, “Oh, you know, I should be doing work in Olin right now, but yes, I’d love to go to Estate Treasures, or Miller’s Pond, or a climate strike,” or something like that. I think college is more than just classes and academics. I think more than 50 percent is experiences and experiential learning, whether that’s social through other people or by doing things and getting that practice. I think that’s super, super valuable.

A: And is there anything else you want The Argus to know about? Anything you’re involved in?

MB: Come out to the farm! 9 a.m. to 1 p.m. on Saturdays. It’s a great time, we’re just all out in the sun, taking care of the land, eating veggies. It’s great. Also shoutout to Middletown Community Gardens, Nur Fitzpatrick’s running those. Really doing awesome work. So if you want to get gardening, let me know!