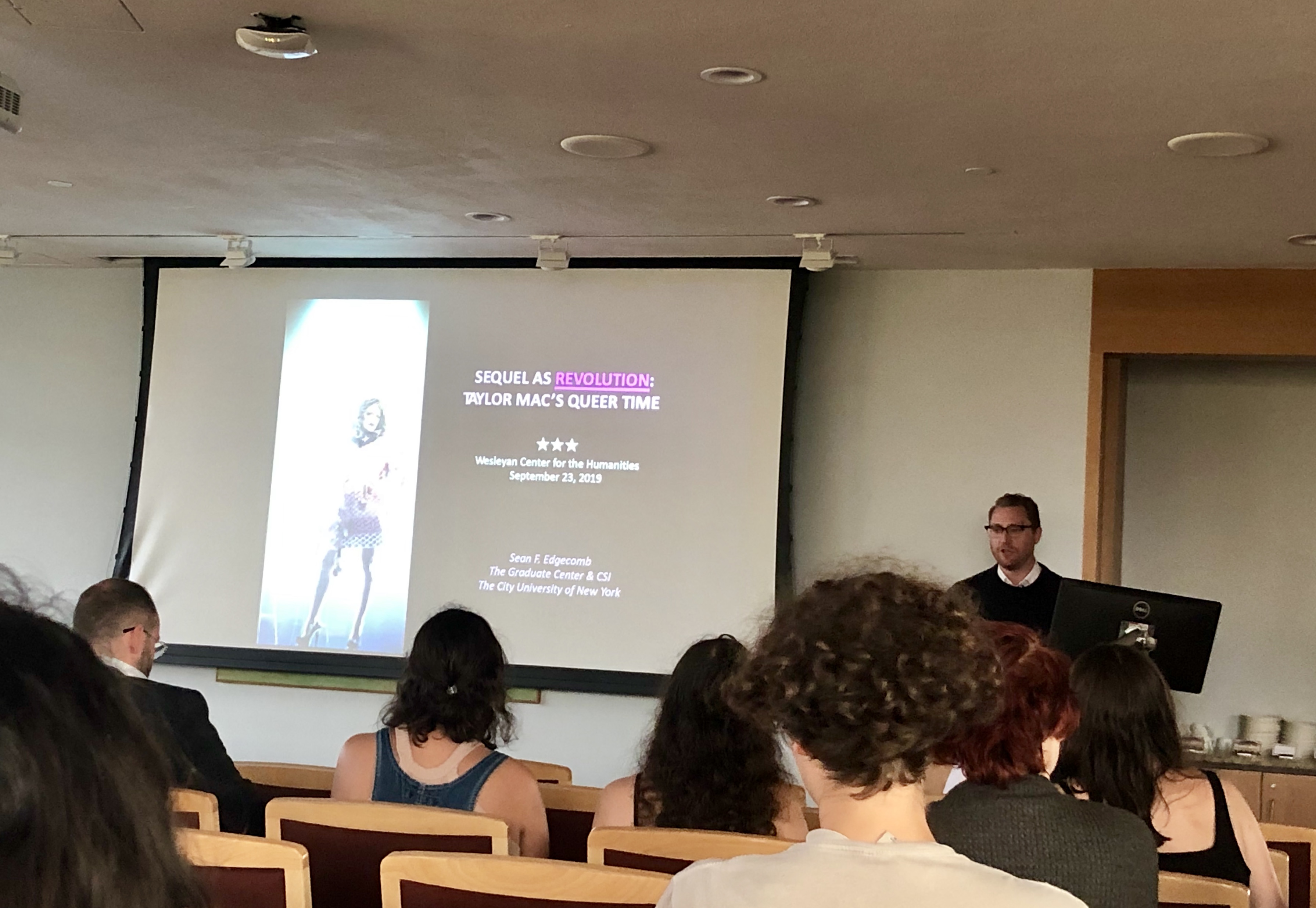 Assistant Professor of Queer and Theatre Studies at the College of Staten Island Sean Edgecomb delivered a lecture entitled “Sequel as Revolution: Taylor Mac’s Queer Time” on Monday, Sept. 23. In his lecture, Edgecomb discussed Taylor Mac, an openly queer performer who focuses on breaking down the negative stigma associated with queer culture and drag. Edgecomb, a long-time fan, believes that there is more to Mac’s performances than just singing or dressing in drag: There is a historical significance that must be addressed in order to help advance society as a whole.

Mac, who uses the gender pronoun “judy” during performances, is known for phrases such as “the revolution will not be masculinized” and “all stories are sequels.” In 2016, Mac created “The 24-Decade History of Popular Music” in which, for 24 hours straight, Mac sings songs from 1776 to 2019, spending an hour per decade. The performance contains more than 200 songs in total and is often regarded as Mac’s “magnum opus.” Judy performed an abbreviated version of the day-long show on campus last week.

“[Edgecomb’s] talk tonight offers a fittingly queer sequel to Mac’s reprisal of ‘The 24-Decade History of Popular Music’ performed this past Saturday at Wesleyan,” Director of the Center for Humanities and Professor of English and Feminist, Gender, and Sexuality Studies Natasha Korda said.

In his lecture, Edgecomb expressed that while Mac’s work celebrates queer culture, it also seeks to represent other marginalized voices. Referencing judy’s performances, Edgecomb discussed the cultural and social implications of Timothy White Eagle, an elder of the indigenous Lenape people, who judy performed as during “The 24-Decade History of Popular Music” to reflect on the true origins of the United States.

“White Eagle…expanded the history of the land and its people far beyond the signing of the Declaration of Independence, reminding us that settler-colonialism, which has long been taught as a point for the beginning of the United States, marks the end to our native solidarity and sovereignty,” Edgecomb said.

Edgecomb said that the stories of marginalized communities, like the Lenape people, have often been neglected by history. Mac embraces these narratives through “The 24-Decade History of Popular Music,” even when Mac’s audiences may not reflect the range of experiences judy performs.

“This form of theater is implicitly Western and colonial in origin,” Edgecomb said. “For the next 24 hours, we would be involved in a celebration of America’s people who have often been forgotten, oppressed, or risked tokenization, and also reminding the primarily white middle-class audiences, the story would not be about them.”

During his lecture, Edgecomb argued that there is more to just dressing up in drag: There are real stories and history behind Mac’s performances. The history that shapes who we are, Edgecomb asserted, must be the same force that guides us forward.

“American history is what we drag behind us,” Edgecomb said. “Perhaps acknowledging the past by engaging with it can help propel us forward today.”