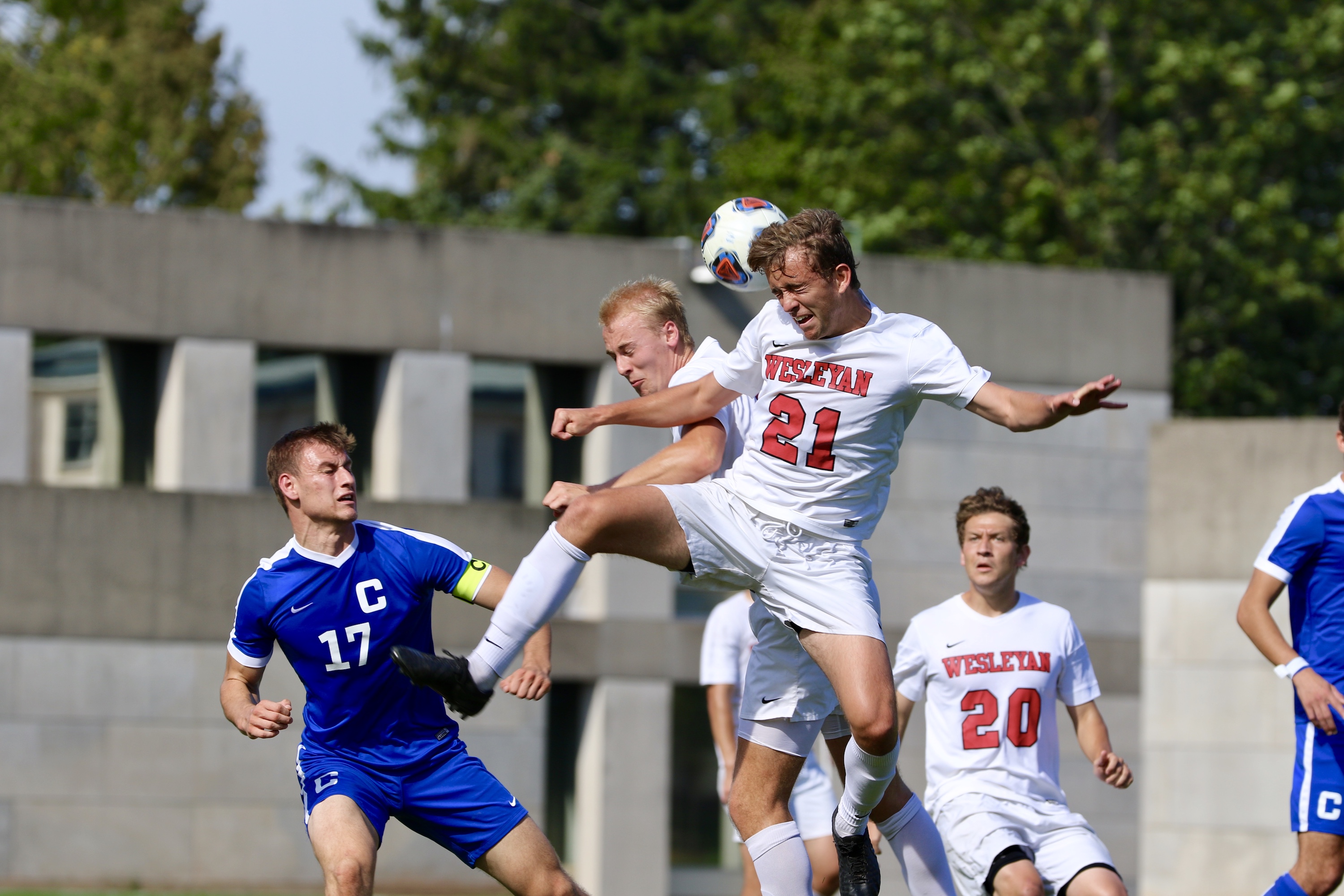 What a week! Men’s soccer spent a successful seven days playing four games and ending with a strong 2–1–1 record. Beyond the numbers, this week was a big step for the team.

The Cards went up against Williams first, losing with a 2–1 score. Next, Wes went up against Emerson, winning 1–0, and followed that with a tie of 0–0 against Bowdoin. The final game of the week against Colby saw a score of 1–0, giving the week an exciting finish for the Cards.

The first game saw the Cards pitted against NESCAC rival Williams. The game was tightly contested for the full 90 minutes. After the Ephs jumped on the board in the 34th minute, it looked as though Wes was in for a tough day. However just a minute later, Alec Haas ’20 beat the keeper to even the score.

What followed was a hard-fought match for the entirety of the second half. Wes and the Ephs exchanged blows with Williams taking 14 shots and the Cards ripping off 11. On the defensive end, Goalie Liam Devanny ’23 once again stepped up with a seven-save performance.

The game was no doubt contentious: over 30 fouls were called in regular time in the match.

Yet as the game hit overtime, Williams began to hit their stride, holding Wesleyan without a shot in the period. Then, in the 91st minute, the Ephs went ahead to take the victory with a crushing overtime game winner.

After the heartbreaking loss to Williams, it appeared as if the Cards were destined for another hard season with still three games left to play in the week. 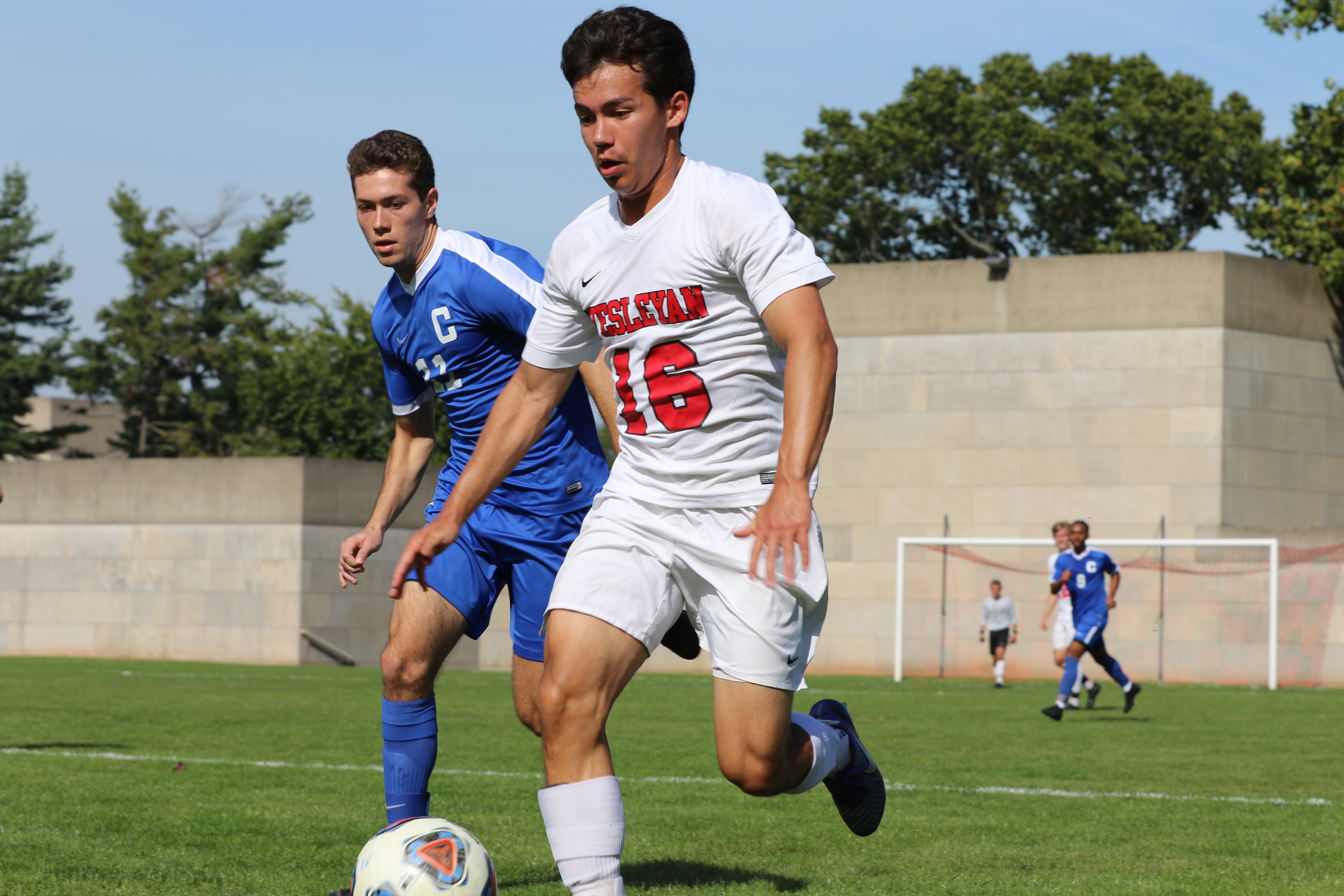 Taking the pitch on Wednesday against Emerson College, it was unspoken that this match was pivotal for the Cardinals. Once again a physical, low-scoring game ensued. One of the themes of the Cards’ season has been their stingy defense, which has been lights-out to this point. Wes did not disappoint; they conceded only five shots on the day.

However, despite their strong defense, the Cardinals again found themselves going into overtime, a familiar position for this team. Despite their tough overtime luck earlier this week, the Cards were determined not to let a similar fate befall them. Just two minutes into overtime, Haas delivered with a game winner, assisted by Matthew Rubinstein ’23.

“It was a huge sigh of relief honestly,” Haas said. “After 90 grueling minutes of us dominating that game, we knew we deserved to win that game. Soccer can be cruel, but it was great to see that ball hit the back of the net as a testament to our hard work. That feeling never gets old.”

The Cardinals left Boston with a gritty 1-0.

Bouncing back after a long physical match against the Ephs only three days earlier is impressive enough to a fan, but to the players, it had an even bigger impact.

“It was huge,” Gaelin Kingston ’22 said. “Four out of our six games so far have gone into overtime, so fighting it out, getting a win, and starting to build that habit was extremely important for our team.”

These two long matches would warrant a rest for most teams, but for Wes, after a mere three days off, the grind began again: This time on Saturday, Sept. 21 to face off with Bowdoin.

Much like all of Wes’ games this year, it was another defensive battle. Neither team was willing to give an inch during the match. Over 20 fouls were exchanged with only one card given out; the refs were simply letting them play. 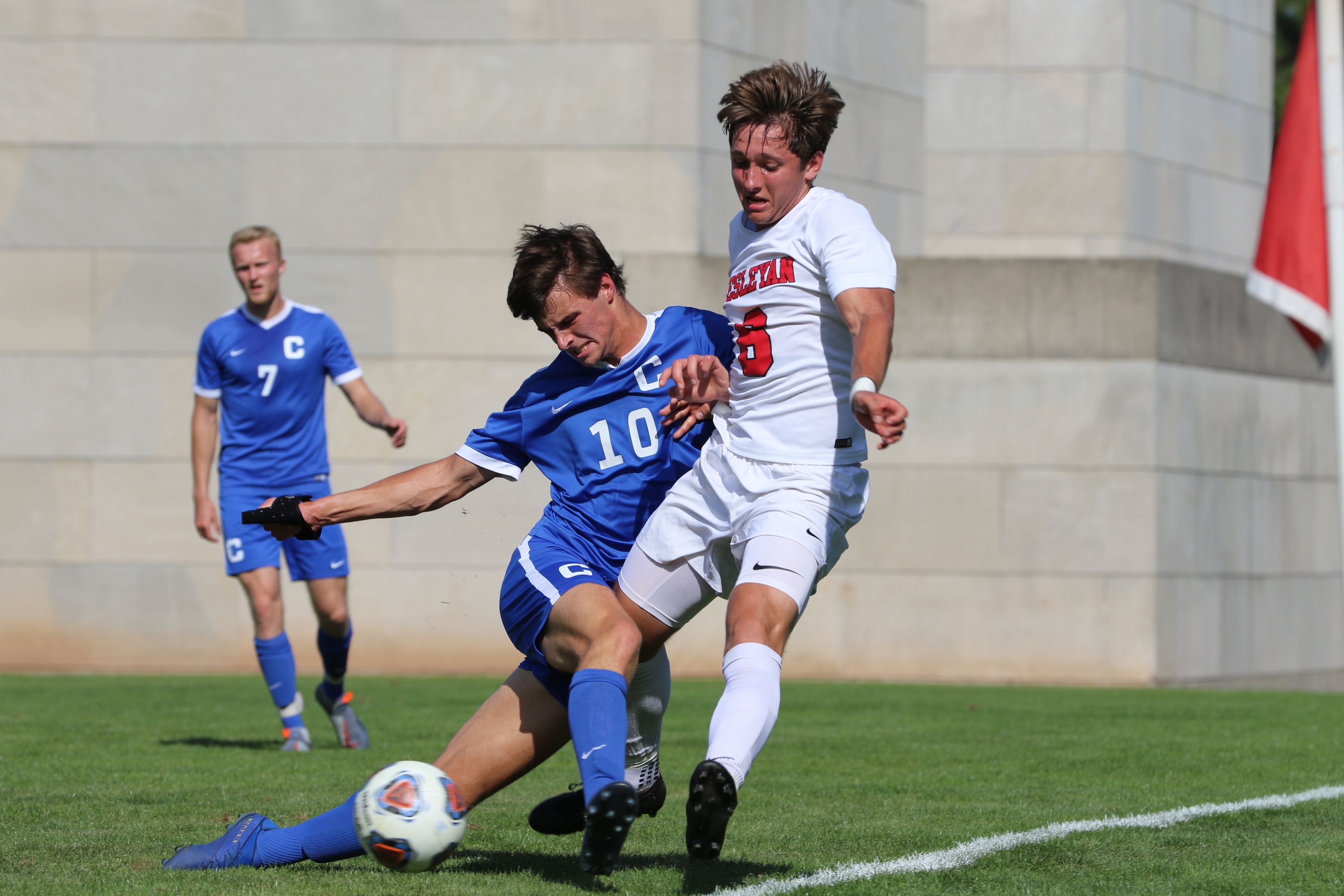 Despite an outpouring of seven shots in the first half, the Cards could not get on the scoreboard. As the game went on, shots came to be at a premium. By the end of the second half of overtime, the score was still knotted at 0-0. Although the Polar Bears outshot Wes 5-0 in overtime, the Cards refused to relinquish the point they had secured, desperately pushing the Polar Bears back into the arctic. The final result was a well-deserved point in NESCAC play for the Cardinals.

“It was a tough eight days on the legs but we focused on recovery after each game,” Haas said. “We took a swim at Bowdoin after we played them and then even stopped our bus ride home two hours in to stretch. Our trainers were phenomenal this week in keeping us on the field as well.”

Turning around the next day to play a fourth game of the week—after seeing three matches go into overtime—is a tall task.

“It’s a gut check in a lot of ways,” said Kingston. “That kind of mental and physical strain tells us a lot about where we are as a team. I think the way we bounced back after losing to Williams is promising, and shows you what we are capable of.”

What Wes would be capable of would be on full display in front of the home crowd against Colby on Sunday the 22nd. Through the first half, Wes once again outshot their opponent but was unable to come up with a goal. This starts to weigh on a team, especially considering how strong their defense has been this year. Luckily, the Cards would not have to wait much longer.

Just three minutes into the second half, Haas once again delivered, firing a strike into the back of the net. Wesleyan’s trademark defense then sealed the game. Devanny only needed to make one save the rest of the game as Wes held the Mules to only six shots. The result was a resounding 1-0 win to a team they had lost to in last years campaign.

When asked about his highlight of the week, there was only one answer.

“Beating Colby on Sunday,” said Kingston. “It was a testament to how much hard work this team has put in to play a double overtime game against Bowdoin on Saturday, and then come back to Jackson field the next day and get our first NESCAC win of the year.”

This growth from last year, and the fight to get through this gauntlet of games has Wes well positioned to finish higher than last season. Each game has been extremely competitive, and if the Cards can continue to stonewall teams on defense, we will be in for an exciting season.

But how far can this team go? Just ask the players.

“Far,” said Kingston. “It’s all about getting incrementally better every time we step on the field. If we can continue to do this, I believe the results will take care of themselves.”

After a well-deserved week off, the Cards will face last season’s NESCAC champs, Tufts, on October 2nd, a game that has been marked off on calendars for months. The Jumbos should be fearful of this young, scrappy, battle-tested team coming to challenge them.