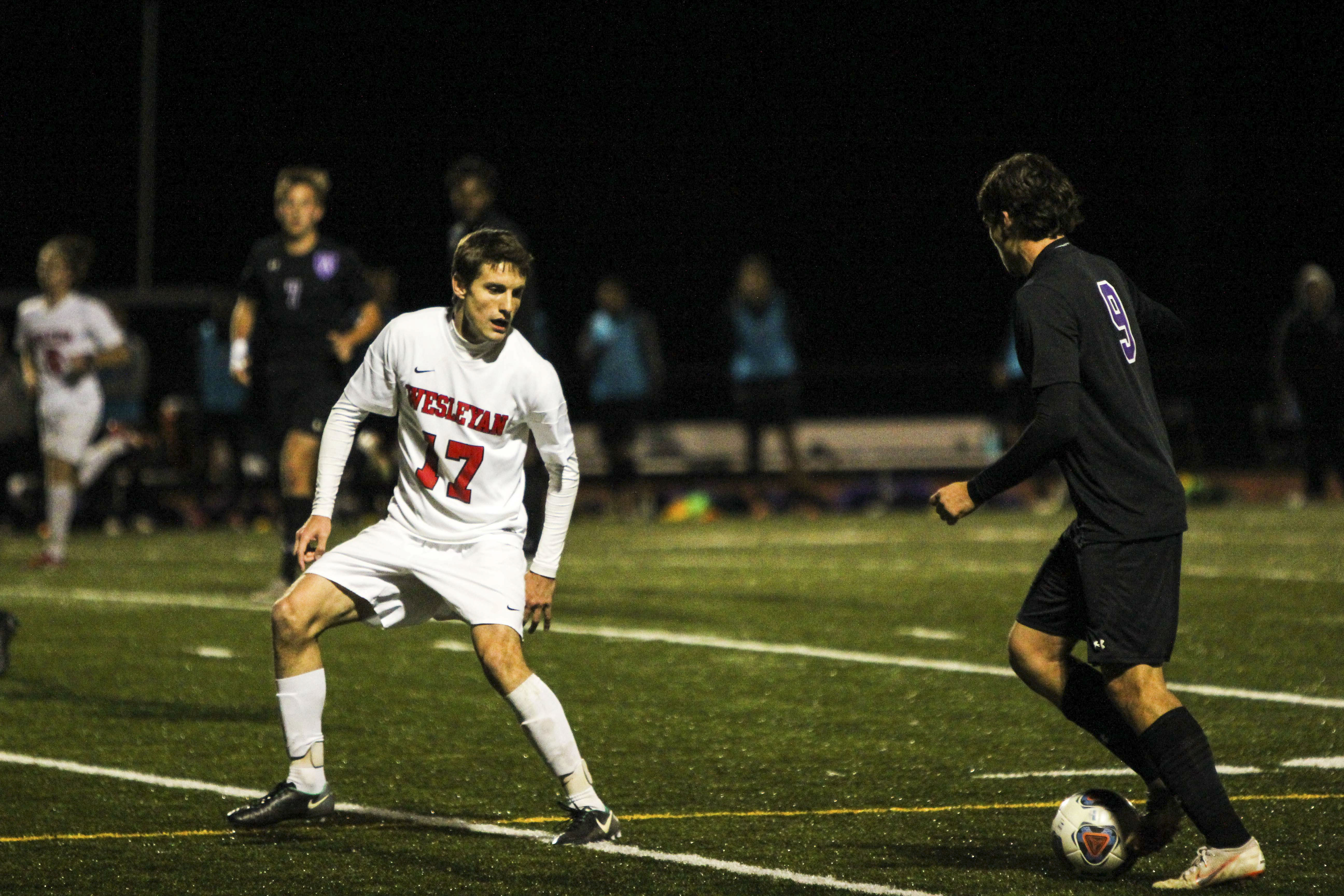 This season, men’s soccer is off to a fast start, looking to rebound after a 2019 campaign that saw them go 4–11. The Cards got off to an emphatic beginning on Saturday, Sept. 7, against last season’s third place finisher, Middlebury. Last year, Wes battled Middlebury in a low-scoring overtime loss. After a preseason focused on strengthening their defense and ball possession, the team looked to put pressure on the Panthers in their first 2019 matchup.

It was a physical contest with 31 fouls combined between the two teams, along with three yellow cards.

“The intensity level of the game was high as anticipated, and I think the guys did a great job of living in the moment and stepping up,” Nick Wallick ’22 said.

The game went to double overtime, with both teams ripping shots and exchanging fouls until the final whistle blew. The result was a 0–0 tie.

Team captain Jack Wolf ’20 believed the team’s strength came from its determination over the course of the entire game.

“We competed and battled the entire time, keeping our focus for 110 minutes in our first NESCAC game as a squad,” Wolf said.

“Our mental toughness helped us clean the sheet that whole game,” Wallick said. “We competed, and had laser focus from the first whistle. The guys fought their hearts out the whole game, and all of our hard work in practice paid off for keeping them scoreless.”

For a Cardinal team that spent this offseason working to strengthen their defense, a scoreless game was definitely a success.

Of course, no one was more pumped up about the defense performance of Wes than rookie goalkeeper, Liam Devanny ’23.

“The highlight of the game for me was the double save I made in the second half,” Devanny said. “I got to settle in and felt a lot more confident after it. The save acted as a boost for both me and my team. A game like last weekend’s shows the unmatched determination and physical and mental stamina this year’s squad has. It was a long 110 minutes of physical NESCAC soccer and everyone outlasted and performed.”

Though only a first year, the keeper provided a big boost to his team that did not go unnoticed.

“I am proud of my teammates, especially our freshmen,” said Wolf. “In their first game they fought hard, without hesitation.”

The players were also appreciative of the crowd that came out to support them. The home turf proved to be an advantage not only to the game spirit, but also the team’s high level of play.

“The energy surrounding the game was definitely a big help with my performance in goal,” Devanny said. “The huge amount of positivity from the crowd, my coaches, and my teammates got me in the right mindset to have a good debut.”

However, a tie is not enough for the Red and Black.

“I think we were happy with the effort and strength as a team, but we didn’t win,” said Wolf. “Sure a point is good, but we want to win every game. We are a hungry team.”

The Cards would have a chance to feast later in the week.

On Wednesday, Sept. 11, the Red Birds took on a non-conference matchup against Springfield College. In a game that may have gotten away from them last year, the Cardinals came out firing, netting two goals in the first half to propel Wes to victory on a beautiful day in front of the home crowd. Cameron Park ’20 opened the scoring with an unassisted goal, 25 minutes into the game. Less than 12 minutes later, rookie Matthew Rubinstein ’23 finished a pass from Wolf, delivering the Cardinals their second, and final goal of the night. The Cards played a clean game the rest of the match, allowing only five shots from Springfield, only two of which even went on target. On the other side, Wes continued to dominate, taking twelve shots and earning thirteen corners.

Another clean sheet will have the team excited as they are yet to concede this season. Clearly, the focus on strong defense this preseason has paid off.

Despite the grit of competition, the team is also making strides to enjoy itself at the start of the year.

When asked about the highlight of his week, Wallick had nothing but praise for his teammates.

“[My highlight is] just being out there with the guys, and soaking up the moment,” Wallick said. “Every moment I have out on the pitch with the team is special, and is unforgettable.”

The Cards both acknowledge the special opportunity they have competing together, as well as the necessity to keep up the intensity.

“We’ve got to keep up the high energy and hard work, the rest will fall into place in the games ahead!” Devanny said.

Coming up, the Red and Black will have a tough conference game at home against Williams on Sept. 14. If the Cards keep their strong start going, purple beef will be on their dinner plate next.