“How Are You Today?”: Sue Scarrozzo Talks Career in Usdan 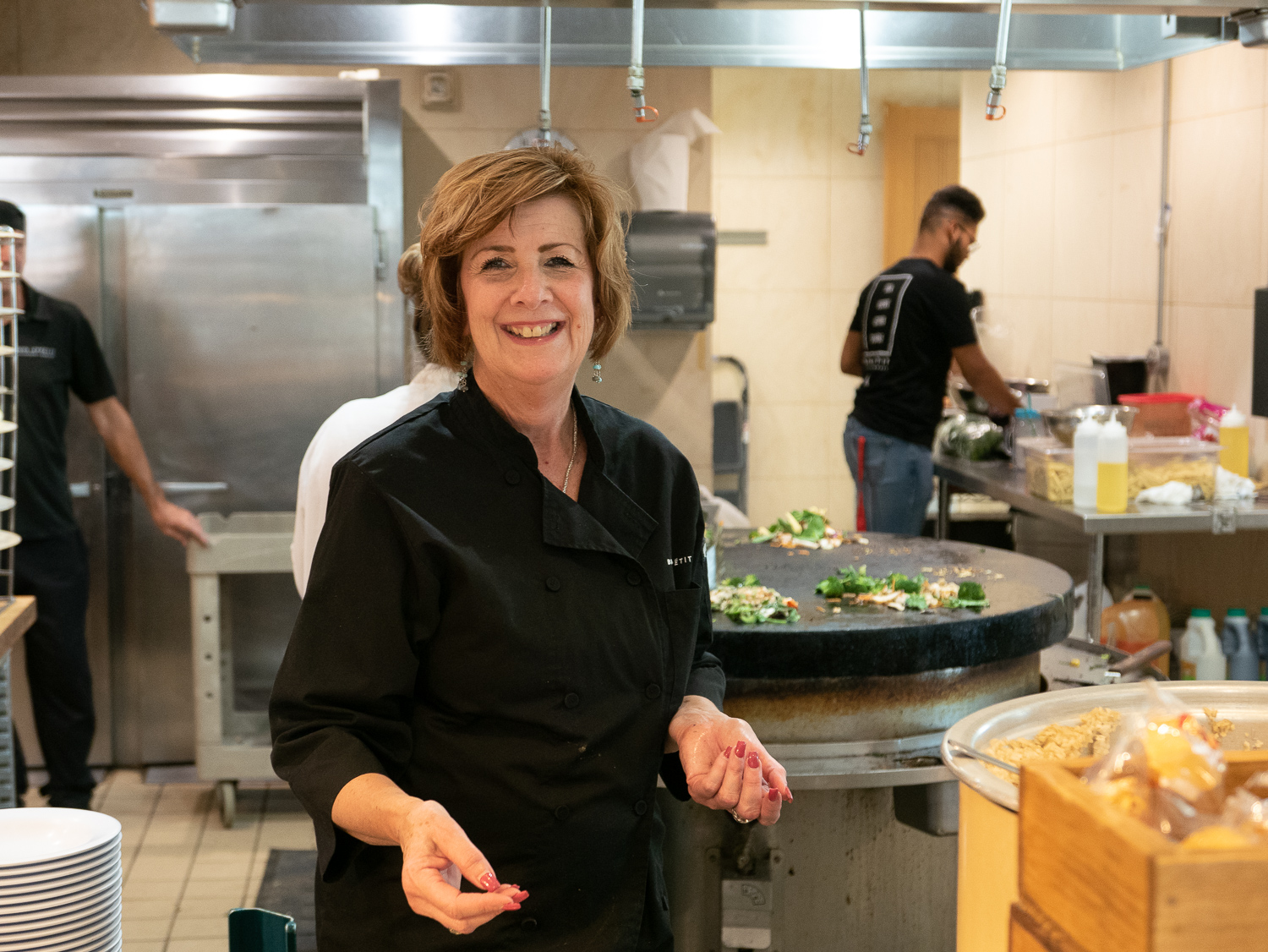 If you’ve ever been to the Mongolian Grill Station at Usdan, colloquially known as “Mongo,” you have probably encountered the friendly face of Sue Scarrozzo. Sporting the Bon Appétit uniform, often with the addition of dangly earrings, Sue greets almost every student with a smile and a simple question:

“How are you today?”

For as long as students can remember, Sue has been a Usdan icon; because she was born and raised in Middletown, she has long felt at home on Wesleyan’s campus. In fact, one of her high school dances was held at Wesleyan’s old dining hall, McConaughey Hall, known around campus and town as MoCon.

“I remember going to a senior ball there when I was in high school,” Sue said. “We thought it was just so beautiful, like, ‘Oooh a senior ball at McConaughey Hall.’”

At the time, she had no clue that in just a few years, she would be back.

Following high school, Sue attended Manchester Community College. However, soon after college, she returned to Middletown, where she raised her two sons.

“I started this job [at Usdan] when my youngest was in kindergarten, and he is now 31 years old,” recalled Sue. “I started working here on weekends because I was a stay-at-home mom and it just evolved. Twenty-five years later, I’m still here.”

You read that right: Sue has been working at Wesleyan for just about 25 years. In fact, her now 31-year-old son Matt works alongside her at the pizza station a few nights a week.

In her 25 years here, Sue has seen many changes to campus. Her first year at Wesleyan preceded Usdan University Center’s construction in 2007, as well as the addition of many other campus dining options.

“There was no Pi back then,” she said. “There was Summies, but it was totally different.”

Sue said she fondly recalls the old University Center, located in the Allbritton building, and McConaughey Hall, which served as the main eating areas.

In addition to physical changes around campus, Sue recounted other unusual things she has witnessed in her time here.

“I’ve seen streakers run through at the old campus center, MoCon, across the football field,” she said. Sue even described how students somehow managed to get a car on top of one of the Foss dorms.

When asked what her favorite part of working at the University was, Sue was very quick to respond.

In addition to keeping track of students’ favorite orders, Sue said that she has also fostered many close relationships with students over the past 25 years.

“I’ll go out of my way for a student,” Sue remarked. “I’ve taken them to the airport, I’ve picked them up from the airport. If a student gets into trouble with something it’s like, ‘What do you need?’”

Sue’s kindness toward Wesleyan students is a product of her personal motto, which originates from the famed Golden Rule.

“Treat others as you want to be treated.” Sue explained. “And you know what, just be pleasant because one person could be having a really bad day, and just by saying, ‘Hey, how you doing?,’ it could just change their whole outlook…their demeanor.”

Sue is very empathetic of students’ struggles as they come to college for the first time.

“You never know what’s going on,” she continued. “No one knows how different anyone else’s life is or how difficult or what problems they have. You know, kids are away from home. Some kids have never been away from home, so I try to make them feel comfortable because they come in…and have no idea what’s going on.”

One way that Sue tries to make students comfortable is by getting to know their names. One of her sayings is, “Learn a new name every day.”

This effort is well-appreciated by Wesleyan students. Sue recalled that there was a student a few years ago who, a week before graduating, informed her that she had been calling him the wrong name for his four years. After asking why he didn’t correct her, Sue said that he simply replied:

“‘I was honored you were calling me by a name.’”

In addition to building relationships with students at Usdan, Sue spends her free time reading, gardening, traveling, and baking. In fact, Sue’s knack for baking has resulted in a nickname among her fellow Usdan employees: “Sugar Baker.”

Even though she enjoys her free time away from Wesleyan, Sue said that she is not quite ready to leave for good.

“I’ll be here for a couple more years at least,” she said with a smile. “Definitely. Students come and go, but the students are all the same, basically. Still good kids.”

Though waiting in the long line at Mongo can be tedious, it’s also a great opportunity to introduce yourself to Sue. Chances are, she’ll remember you.