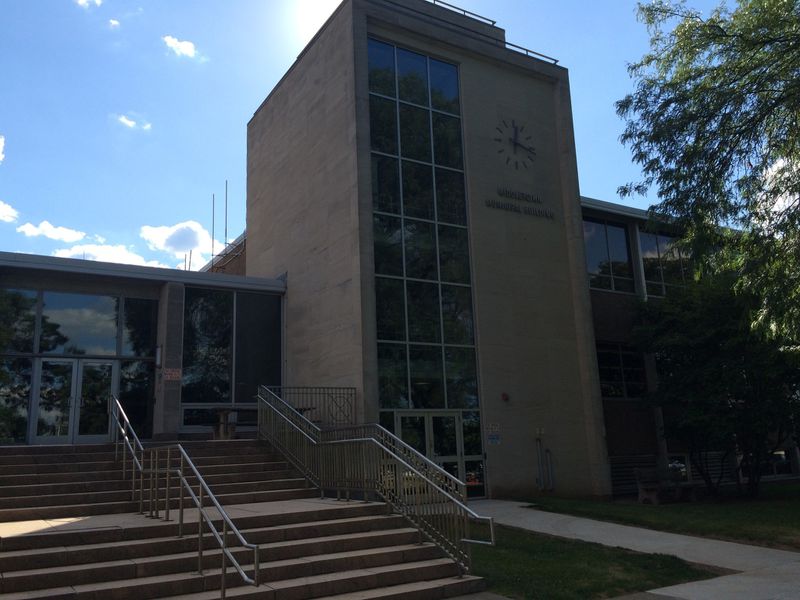 On Wednesday, Sept. 4, students at Middletown High School held a forum with Democratic mayoral candidates Ben Florsheim ’14 and Geen Thazhampallath. Hosted by the Mayoral Youth Cabinet, Middletown students asked candidates a range of questions regarding local and national issues oriented towards student concerns, as well as the Middletown community at large. Despite the rain, over a hundred Middletown residents and Democratic primary voters packed the MHS auditorium.

“We were the youth that really got the ball rolling on this event tonight,” forum moderator and Middletown High School student Evan Davis said as he introduced the other six students that helped facilitate the debate. “We just wanted to make sure that we are really thinking about all of us in this upcoming election and wanted to have an event that was focused on student issues.”

Following the forum held the previous night by the North End Action Team (NEAT), Florsheim and Thazhampallath utilized the high school forum as one of their last opportunities to reach Democratic voters before the primary vote on Sept. 10.

“I’ve found a place that feels like home here in Middletown, and that’s one of the main reasons why I’m running for mayor,” Florsheim said in his opening statement. “I’ve worked all across the state for the past couple years as a community outreach staffer with Senator Chris Murphy and I work with different local governments across the state and what I hear often about Middletown, from other mayors or just people that I meet, when I tell them this is where I live, is excitement and optimism. I love Middletown, I love Main Street, I love the culture we have here, and I think we have to recognize the extraordinary potential we have here, but we have big decisions to make in the next couple years with respect to public education and the development of the riverfront.”

Thazhampallath echoed Florsheim’s praise for the city’s charm and offered his own personal anecdotes about the successes of the Middletown school system, which he attended.

Giving candidates two minutes each to respond, students raised questions ranging from how to fight for gun control and climate justice to the candidates’ stances on the effects of President Donald Trump’s rhetoric on Middletown’s youth.

“We need to address issues like climate change on the local level,” Florsheim said. “The Green New Deal was born in Middletown. The Sunrise Movement, which is a youth led climate justice movement, was co-founded by a guy named Evan Weber [’13] who was a graduate of Wesleyan in the year ahead of me. The idea of the Green New Deal is national funding and local solutions, and what we can do in Middletown to live up to that legacy that exists for us is to start paving the way by setting clear goals that, in 10 years, we can be 100 percent renewable.”

Aside from the pointed policy discussion that took place between the candidates at the forum, focus also fell on the two absent candidates, to which participants alluded on multiple occasions. Both the Democratic Town Committee (DTC)–endorsed candidate, Common Councilwoman Mary Bartolotta, and the Director of Public Works, Bill Russo, refused invitations to attend the event despite student organizers’ efforts to get all candidates on a debate stage, including offering multiple dates to accommodate candidates’ busy schedules.

The Mayoral Youth Cabinet students who organized the event said they faced significant difficulties in trying to get responses from Bertolotta and Russo, both of whom are considered to be the frontrunners in the race. Russo and Bartolotta did not respond to requests for comment from The Argus.

“We called their offices, we offered them four dates, and they didn’t respond,” McMillan said. “We said we would make time, any time that worked for them to come because we wanted all four candidates on the stage, so after a few days we wrote physical letters to hand to them.”

McMillan said that he and a few other students were walking up to Bartolotta’s home to make sure that she got a physical invitation when they ran into her as she pulled into the driveway.

“Our interaction was fine and sweet, but about an hour after that I got a call from someone working on her campaign saying she was not available any time, any day leading up to the election, so you can take that however you want,” McMillan said.

Students met similar impediments in trying to get in touch with Russo’s campaign. After showing up to his empty office multiple times, they eventually got in touch with him. According to students, Russo expressed concern that the environment of the forum would not hospitable to him and he would only be attacked.

“We assured him the questions would be not be biased, and just general questions,” McMillan said. “In general, we were very disappointed.”

This forum was the only student-organized event, and it was also the only event where the candidates were not given the questions beforehand. Students speculated that this caveat might have been a factor motivating the two candidates’ absence at their event.

“I chalk their decision not to attend up to them not being willing to answer questions on the fly, but being a mayor is all about people asking you questions on the fly,” Vice Chair of the DTC and Florsheim Campaign Manager Bobbye Knoll Peterson said. “And I also think it’s a deficit to them. There were over a hundred voters there and they missed an opportunity to have a candid audience of over a hundred voters on a rainy Wednesday night so you can’t tell me you were doing better voter contact.”

As one Middletown resident noted during the Q&A portion of the forum, voters, students, Democratic strategists, and other Common Council members in attendance all noted the absence of the two mayoral candidates.

“For me personally as a voter, that is a huge issue that Bartolotta and Bill Russo didn’t show up,” Peterson told The Argus. “The fact that they are cherry picking which parts of the community they are willing to talk to is a problem, and I don’t see how anyone could vote for someone who is participating in one forum and not another.”