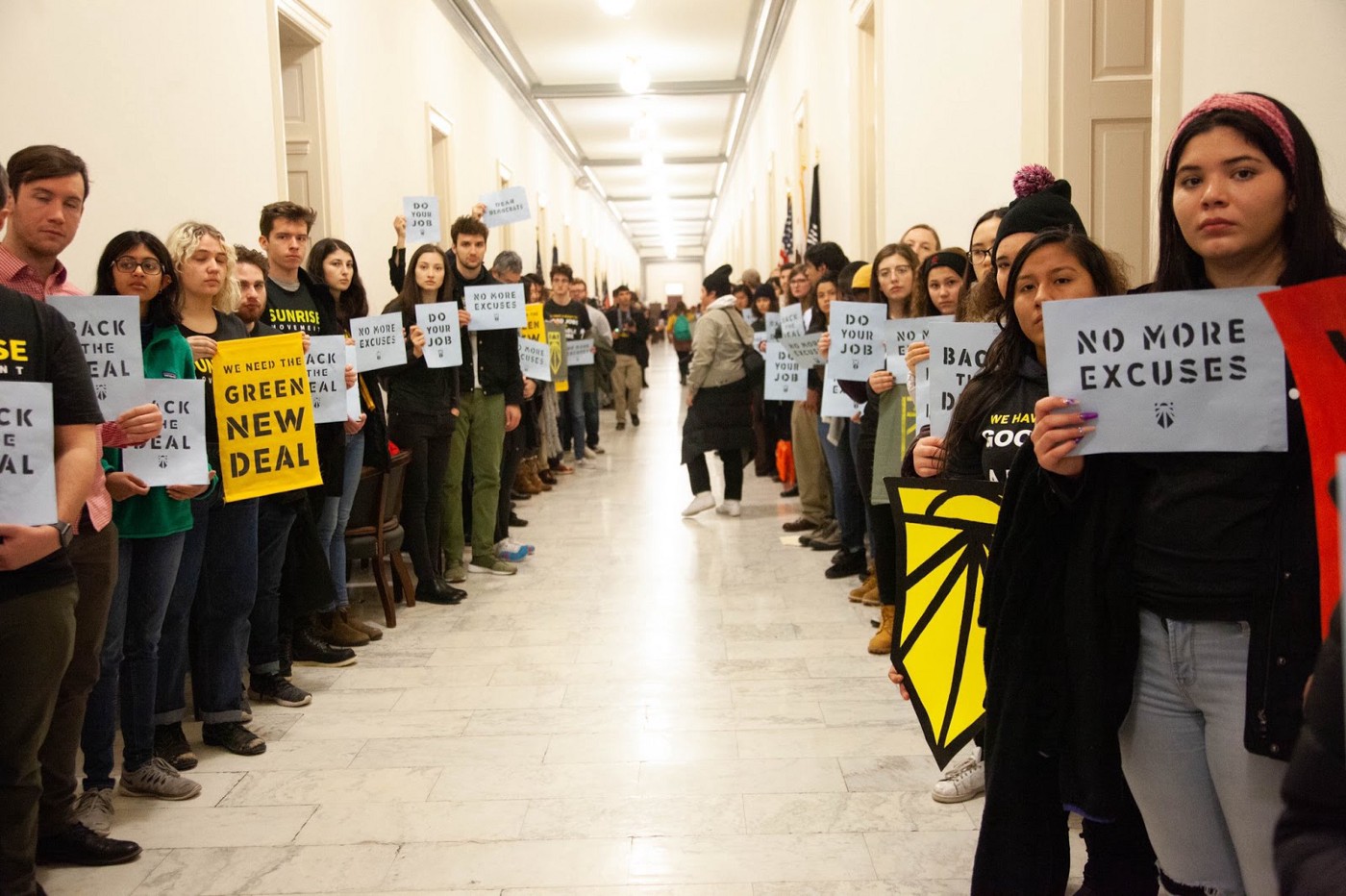 As you might be aware, 2019 has been a rough year for planet Earth. July was the hottest month in recorded history; forest fires have been raging in the Amazon for months; President Donald Trump just this past June put forth an energy plan which seeks to revitalize coal-burning plants and the mining industry. But as epic tales of the impending climate apocalypse plague the headlines, activists across the country are organizing with increased energy and verve. And remarkably, many of the activists in charge of the most high-profile environmental movements are not yet of voting age.

Inspired by young activists like Greta Thunberg (age 15) and Isra Hirsi (age 16), Wesleyan students Jackie Duckett ’20, Sanya Bery ’21, and Olivia Weiss ’22 are launching a Middletown hub of the Sunrise Movement, a youth-led organization which seeks to combat climate change and create jobs in the process. It was after Duckett attended a Sunrise orientation training last fall that she began to ask herself: Is there a place for Sunrise at Wesleyan? She was inspired by their organizing tactics, which draw on the history of civil disobedience movements and are highly strategic in an effort to build momentum as the situation becomes increasingly dire. In fact, it was out of Momentum—a progressive incubator which aids organizers in the development of social movements—that Sunrise was born.

“[Momentum] is founded on three principles: escalation for a cause, popular support, and absorption,” Duckett explained. “So you’re decentralizing the movement and absorbing new people…. That is the way to strategically organize lots of different people.”

Organizing a diverse group of people is a central goal of this burgeoning Middletown hub, a goal which Duckett has been very conscious of as they begin the daunting process of building a coalition of different activist groups. The Sunrise hub that Duckett is forming is not just for Wesleyan students, but for the larger Middletown community.

“Sunrise is rooted in racial, social, and economic justice, so to keep it on a privileged campus feels wrong in a lot of ways,” she said. “So we’re trying to get younger people involved too. This is a youth-led movement, so we’re trying to get middle and high schoolers involved, and maybe other universities like Middlesex Community College. That’s something that’s been really hard—figuring out how to get young people really passionate and riled up about this issue. It’s also hard because I’m not sure if I should go through the administrations of these schools. I feel kind of lost in the process of getting these students involved. We’re targeting Middletown high school students right now and it’s hard.”

Still, Sunrise Middletown is well on its way to getting involved in the broader sustainability movements in the community. Last weekend, Duckett attended a Connecticut Climate Crisis Mobilization (C3) meeting to connect with other Connecticut climate activists, and plan for their first action: a climate strike in Hartford on Sept. 20. Middletown activist Jeff Hush ’84 also attended the meeting as a local representative for the organization CHISPA, which works to organize communities of color in the fight against climate change. Hush noted in admiration that it was young people—namely Sena Wazer, a Connecticut climate activist—who were truly running the show.

“So you have a 15-year-old leading all of these 50- and 60-year-old environmentalists and telling them what to do,” he said. “And they’re listening. This is really being organized by youth. There’s about 60 other groups affiliated with this movement, but it’s all being led by these youths.”

The meeting, as Duckett explained, gave Wazer an opportunity to give other climate activists an idea of what the Sept. 20 strike is going to look like.

“That meant going over the budget, going over each part of the action,” Duckett said. “As I understand it at this point, there is going to be a big rally all together and then there is going to be poetry and different art forms, chants, music and speakers. And then they’re going to go from the rally to the statehouse. They’re not holding a sit-in, but a die-in, where everyone pretends to be dead by sitting or lying down. It’s a big visual statement to show that our lives are on the line for this issue.”

The upcoming strike is a part of a global youth-led climate strike, led in part by famous Swedish teenaged activist Thunberg, which is calling on adults to join young people in a massive global day of action. The question of where to take action, however, has been a point of debate. As activists are organizing a climate strike in New Haven on Sept. 20, other Connecticut organizers have been contemplating whether or not smaller cities and towns should have their own strikes as well. Hush sees this action as an opportunity to consolidate the momentum in one place, for one cause.

“What’s happened in the past with these kinds of rallies is you have 50 people in Middletown, you have 30 people in Wallingford, you have 40 people in New Haven, you have 250 in Hartford,” he explained. “It is centralizing the movement. We need to consolidate into a unified front.”

Duckett also understands the need for higher attendance numbers for the statement to be more impactful, but struggles to navigate the questions of accessibility that inevitably arise when considering how to transport people from one city to another for activism.

“People weren’t sure there should be two events, or more for places like Middletown,” she explained. “But they want mass action, they want numbers at each event instead of it all being spread out. This is something I have been contemplating a lot: What would be a more effective way to mobilize this Sunrise hub? I think we’re planning to mobilize a group from the Middletown hub, including Wesleyan students, over to Hartford on that day.”

As Duckett and her co-leaders strategize about how to move forward, they’ve been facing a problem not uncommon among grassroots organizers. Despite the fact that there are many eager environmentalists both at Wesleyan and in Middletown, the community lacks a far-reaching network that connects all of the various sustainability movements.

“I think that’s kind of a problem on this campus, climate groups aren’t always organizing together,” she explained.

Nevertheless, armed with the grounding principles of its parent organization, the newfound Middletown Sunrise Movement plans to hit the ground running, entering the Middletown sustainability scene with a commitment to organizing young activists from across the region.