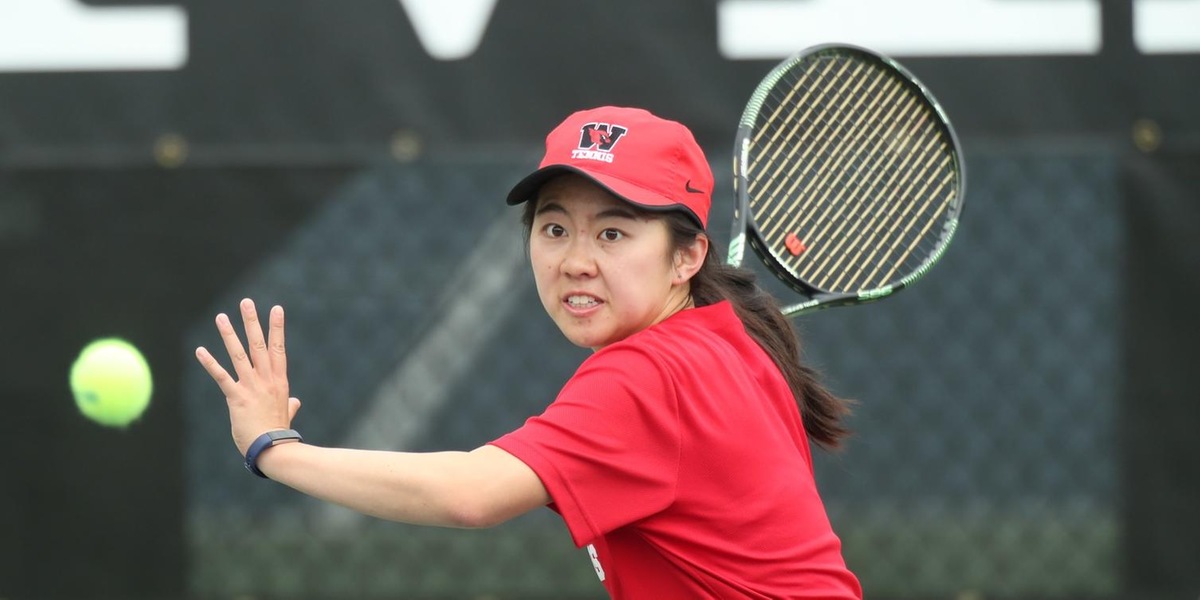 This year’s women’s tennis team has hit the history books, slamming old records with a slew of wins in a successful run for the NCAA title and clinching the Division III title for the first time. The Cardinals have finally headed home for the summer with a 20-2 overall record, an 8-1 conference record, and a Little Three Title.

Post-season play for the Cardinals started in the beginning of May with easy wins over ’CAC competitors Bowdoin and Middlebury, followed by consecutive victories against Rhode Island College, Brandeis University, and the Massachusetts Institute of Technology to reach the semifinals. The resulting matchup against no. 1 Emory University was the Red Birds’ first semifinals appearance in team history—but not the first time they had faced off against the first-ranked team. The teams battled earlier in March, resulting in one of just two total losses in the Cardinals’ spring run.

With wins at first and second doubles and second, fourth, and fifth singles, Wes took a narrow 5-4 win against Emory and advanced to the finals.

A bi-coastal competition then took place on Wednesday, May 22, as the Cardinals battled Claremont-Mudd-Scripps (CMS) in a tense NCAA Division III Championship match. In doubles, Alissa Nakamoto ’21 and Alexis Almy ’22 fell 8-4 at third, but second doubles team Venia Yeung ’22 and Polina Kiseleva ’21 took an 8-5 victory to keep the match at an even 1-1.

The famous sibling pair of Victoria Yu ’19 and Kristina Yu ’22 showed strong familial bonds with a win at first doubles. They managed a close 8-6 victory to bring the team to a 2-1 lead.

In singles, Megan Tran ’22 fell in a tough match at six, evening the team tally at 3-3. Almy boosted the birds back to the lead, recovering from her doubles loss to emerge victorious at fifth singles. The Cardinal advantage continued to grow as Yeung took a win at second. CMS struck back in third to defeat Kristina Yu, while fellow Yu, Victoria, fell at the number one slot.

Things were all tied up at 4-4 going into the fourth singles match. Kiseleva returned to the court from her earlier doubles play and took off on an aggressive four-game run to seize the first set 6-4. Her CMS opponent fought hard in the second, taking a 5-3 lead. Kiseleva put in the effort to strike back, pulling to within a game at 5-4, but eventually lost the set 6-4.

The entire fate of not only the match, but also the Cardinals’ title now rested in the result of the third set. But despite the extreme pressure, Kiseleva wasn’t too worried.

“I felt confident in my tennis ability to push through any difficulties, which I think mentally just kind of allowed me to brush the thought of the results aside and just focus on the present,” Kiseleva said. “I think that this mentality has been my key to success this season: focusing on what I’m doing right now and letting the results speak for themselves.”

Kiseleva snagged an early lead to bring her up 3-0, but her opponent eventually answered, and the match remained competitive at 4-2. Kiseleva finished the set 6-4, bringing the historic victory to Wesleyan.

“It has been difficult wrapping my head around the fact that we’re now the best team in the country,” Kiseleva said. “It’s been absolutely the most incredible thing so far in my tennis career.”

“I really don’t think the week has fully sunk in just yet,” he said. “But coming back with the success we had out there and winning our first national title feels pretty awesome!”

Yet the success didn’t stop with the NCAA victory. Individual competition continued in Michigan after the title, where Yeung, K. Yu, and V. Yu were selected to face off in singles. The Yu sisters also competed for the doubles title.

By the end of the week, K. Yu had fallen in the first round of singles play and finished the season with the doubles quarterfinal along with her sister. V. Yu went on to the singles quarterfinal; the loss concluded her collegiate tennis career.

“I feel a little sentimental leaving the team,” V. Yu said. “We’ve grown so much this year, and I could not be more proud of each and every one of them and all we have accomplished this year. They are such a young group of ladies and have so much potential. With even more talented girls coming in, I know they have big things in store for them. We hit a lot of milestones this year, but my hopes are for them to continue to grow together as a team and to keep setting records…. I have no doubt in my mind, that that is exactly what they will do.”

First-year Yeung has years ahead to grow and do just that. She placed second in the singles competition and joined former DIII Singles Champion Eudice Chong ’18 at the ITF World Tennis Tour in Hong Kong, competing May 29 and 30.

“Although it is a little sad that I couldn’t end my rookie season perfectly with my NCAA singles title, I am so happy with the results I had—making history in the team events and making it to the singles final,” Yeung said. “I am also really proud to be able to represent Wes and I hope there’s many more to come.”