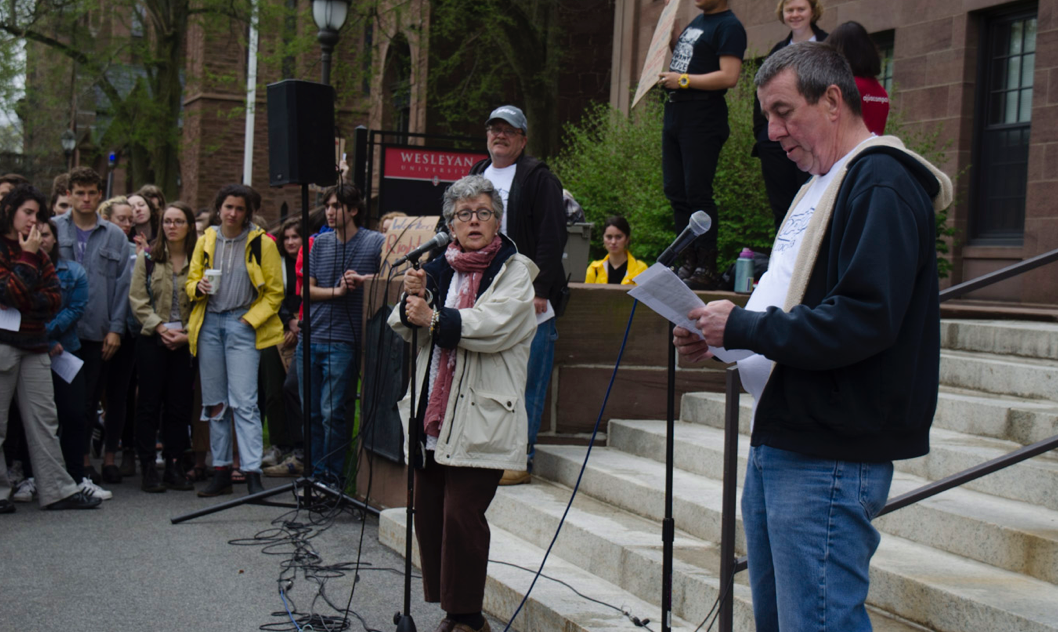 Physical Plant employees publicized their complaints about understaffing and Facilities Management’s overuse of subcontractors at a rally held by United Student/Labor Action Coalition (USLAC) on April 26. One Physical Plant employee, Gene Payne, read from a letter that was written by Seth Goldstein, the Senior Business Representative of Physical Plant union Local 153, and sent to University President Michael Roth ’78. The letter included signatures from 30 members of the 48-person Physical Plant staff.

Physical Plant employee and Local 153 Chief Steward Pete McGurgan explained that Physical Plant employees were not asking for an expansion of staff, but instead for vacancies that have opened up over the past several years—due to retirements, job changes, and other losses—to be filled. In an interview with The Argus before the hires were announced, McGurgan addressed this request.

“We’re not looking for a lot,” McGurgan said. “We lost eight people over the last three or four years. We’re looking to get five people replaced.”

In the letter, Goldstein raised concerns about the practice of contracting outside companies to perform maintenance work while the Physical Plant staff is depleted.

“During recent years, the Physical Plant has completely outsourced custodial work to SMG Corporate Services and subcontracted large amounts of our maintenance and repair work,” the letter reads. “At the same time, our staffing levels have been severely cut, impairing our ability to complete necessary time sensitive work projects.”

Goldstein also described concerns that such trade-offs have potentially led to broader consequences in the quality of work and employment standards that might affect both full-time Physical Plant employees and subcontractors.

He concluded by calling for an investigation into the University’s subcontracting practices and requested a meeting with Roth to discuss such matters further.

On May 1, in a letter obtained by The Argus, Senior Associate Director for Human Resources Frank Gramuglia responded to Goldstein’s letter, noting that he was writing at Roth’s request.

“We very much value our long and productive relationship with Physical Plant workers and Local 153 and the University would be happy to meet and discuss your concerns after we have had a chance to look into them in detail,” Gramuglia wrote.

Gramuglia’s letter did not address the complaint about the division of labor between Physical Plant employees and subcontractors, nor did it address understaffing. However, Gramuglia stated the University was willing to investigate projects completed by subcontractors where the quality of the work was compromised if details on specific cases could be provided.

In an email to The Argus, Gramuglia wrote that confidentiality binds him from discussing the particulars of meetings, but he confirmed that he regularly meets with representatives from various employee groups, including Physical Plant and that they have broadly discussed matters of staffing, group benefits, wellness, and safety. 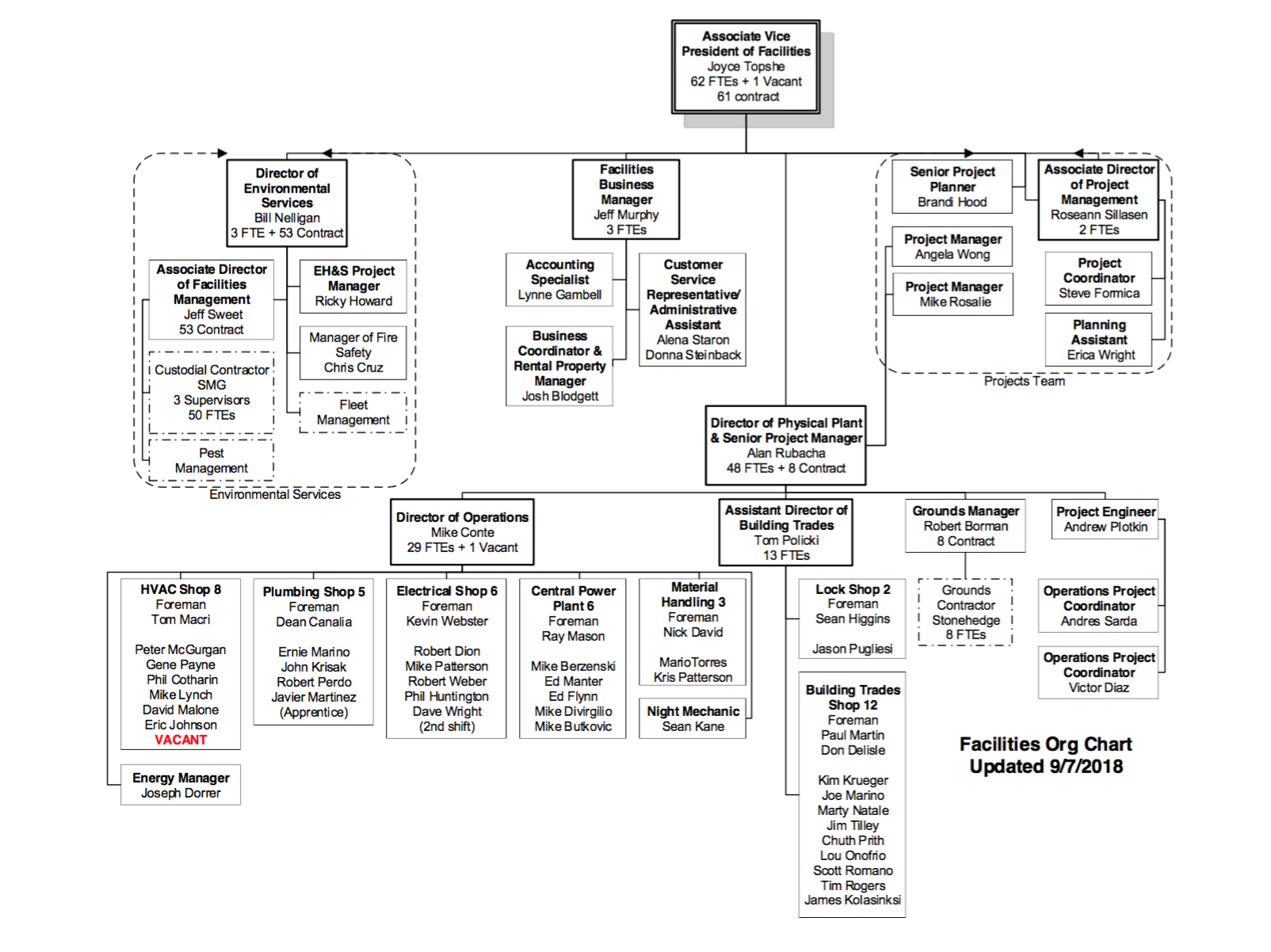 As of the most recent Facilities Organizational Chart released by the University, posted on Sept. 7, 2018, there are 48 full-time employees who fall under Director of Physical Plant Alan Rubacha’s supervision. Some work in various shops, such as Electrical; Heating, Ventilation, and Air Conditioning (HVAC); Plumbing; and Material Handling, often referred to as carpentry. Only one vacancy is shown, under HVAC. All of Physical Plant falls under the Facilities Department, run by Associate Vice President for Facilities Joyce Topshe.

McGurgan and Physical Plant Electrician Phil Huntington recalled specific instances in which employees across Physical Plant’s various specialized teams have left, retired, or passed away over the past several years. They say that a plumber, two HVAC team members, one carpenter, and an electrician whose position became vacant after a team member became the foreman, have never been replaced.

The new hires will be one plumber, one HVAC team member, one carpenter, and one electrician.

Topshe addressed Physical Plant understaffing in an email to The Argus a week before the new hires were announced.

“The Physical Plant Department has 4 vacancies,” Topshe wrote. “We are currently assessing how best to fill them. We expect progress on this in the coming weeks.”

“[She] said that a year and a half ago,” he said in response.

Since the announcement, McGurgan told The Argus that he and other employees will still be working toward a fifth hire—another HVAC employee—but that these hires are a step in the right direction.

McGurgan, Patterson, and Huntington said that little to no progress has occurred during meetings with Gramuglia, with the exception of one meeting near the beginning of the semester involving Rubacha. They allege that during this meeting, Rubacha promised to hire four more workers, including one plumber and two HVAC employees. In the next meeting in late March, though, they say he retracted the promise, citing a hiring freeze. (Rubacha declined to respond to a request for comment and forwarded questions about the meetings to Topshe, who did not respond.)

Low staffing across the shops has reduced the employees’ ability to stay on schedule with maintenance projects. In addition, Physical Plant employees expressed concern over the tactics that the University has used to contract out work to other organizations. Some believe that the University is using a tactic that they refer to as “bundling,” or combining various projects to an unmanageable size so that Physical Plant does not have the manpower or time to take on a project of that scale.

“Call it 40 porches on campus,” Patterson said, recalling a summer 2017 project in which construction work to 34 wood frame porches was divided between two companies. “What they do is, instead of saying, ‘Okay, you guys take a couple of these and then we’ll figure the rest out, make it work,’ they’ll say, ‘No, it’s forty or nothing.’ And then we can’t handle that workload, so then someone will take it, and then they have…other companies go and do it. So, in theory, they’re splitting it up, but they’re not involving us.”

“How are we going to bid on 30 porches with three or four carpenters?” McGurgan explained. “You can’t, so it would just never come our way.”

McGurgan believes that bundling is an attempt on the part of Facilities Management to get around a portion of their contract.

“We have a piece of our contract that I can speak to pretty well,” McGurgan said. “I kind of built it, put it in as an addendum because what they were doing was farming everything out…. So we basically said that we have the right of first refusal. You have these jobs, it’s got to go by the different departments that can do them, and they can say, ‘All right, there’s no possible way we can do that,’ or not. At least we have an option to try to do some of the work.”

“We realize we’re not going to put up the Science Center,” he explained. “But something like those porches, those guys could have taken four or five of them down in-house, save the money on the materials that you pay in taxes that have to be paid outside of here.”

Topshe did not respond for comment about bundling but more broadly spoke to the practice of contracting out work.

“Physical Plant staff have a primary role of maintaining the day to day operations of the 300 buildings on our campus,” Topshe wrote in an email to The Argus. “To the extent that there are major repairs or capital improvements it is necessary to supplement our in-house team with outside contractors. This model of in-house staff supplemented by outside contractors is typical of every College and University…. Major maintenance projects are competitively bid to achieve the best value to the university within a very constrained schedule [during the summer]. In-house staff are invited to bid on those projects and they are often awarded the work. However, because in-house staff are already working a 40 hour week maintaining our existing 300 buildings, the project work must be done on overtime during the nights and weekends.”

According to Rubacha, the positions will be posted in the coming weeks.

Physical Plant will be entering regularly scheduled contract negotiations with the University in June.