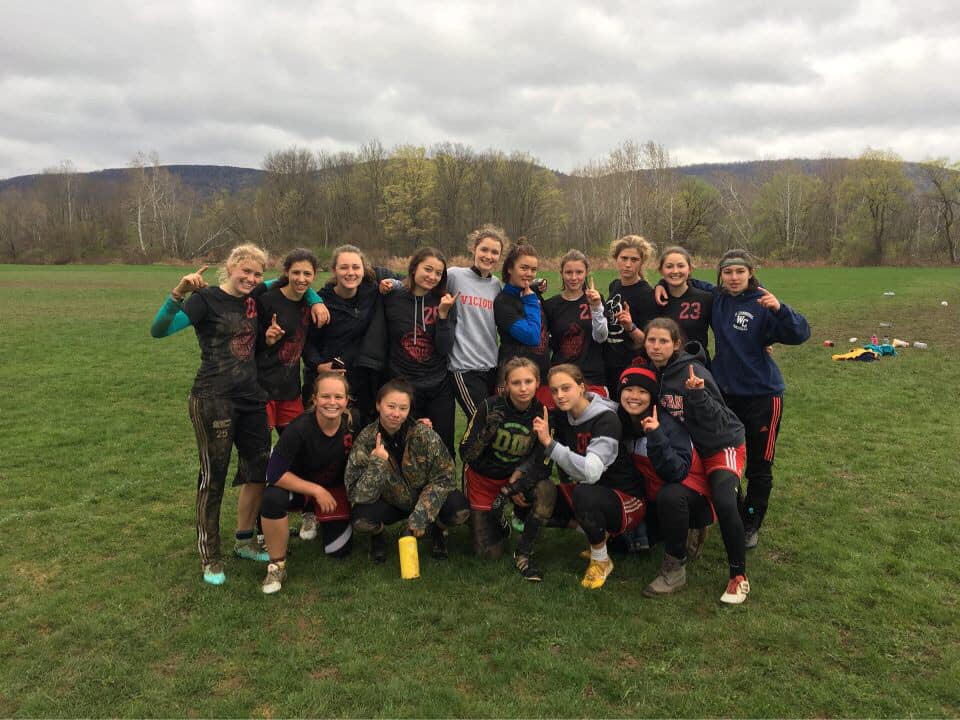 The women’s Ultimate Frisbee team, Vicious Circles, is heading to the DIII National Competition in Bryan College-Station, Texas, on May 18 and 19. This is the fourth year in a row the team will be attending nationals, but this year in particular was an unpredictable one, given that 13 players, including more than seven members of the A-team, graduated in 2018. This year, the team planned to focus on rebuilding, with less of an emphasis on performing well in competitions. However, this successful season indicates that the new members of the team, as well as the current team dynamic, have proven strong enough for the team to move on to the highest level of competition.

“Our team is really deep,” explained team president Sydney Taylor-Klaus ’20. “We don’t have just one or two stars where it’s like, ‘Oh, those are the really good ones and everyone else is ehh.’ We have a really deep team, where everyone is a threat.”

In the fall season, new players are taught the game, and then training begins seriously in the spring semester. The A-team practices three times a week, while the B-team practices two times a week, with both teams in competitions on the weekends. During spring break, the team takes a trip to Myrtle Beach, N.C. They then have a number of one- or two-day tournaments in the first few weekends after spring break and then will attend Sectionals.

The top four of the six teams in the sectional tournament, which included Vicious this year, move on to the Metro East Regionals competition. This year, the competition took place on the 28 and 29 of April. Only the winner of regionals will automatically qualify for nationals. This year, Vicious Circles went against the SUNY Geneseo frisbee team in competition for first-place, ultimately winning by a score of 10-6 and securing their place at the national competition.

This regionals proved to have even higher stakes than usual. Lily Gould ’19, Amabel Jeon ’19, and Kelly Jamrog 19, team captains, explained that due to an upset earlier in the pool, Vicious played Rensselaer Polytechnic Institute (RPI)’s frisbee team—one of the most competitive teams at regionals—in the semi-finals rather than the finals.

“So we had to go into that game really fired up, because we were really determined to make it to the finals and knew we had to beat them—a team of really athletic, really talented frisbee players—to move on,” Gould, Jeon, and Jamrog noted in a message to The Argus. “We started the game down, but we kept working at it, and came back from behind to win.”

After winning against RPI, Vicious played against SUNY Geneseo, which, according to players, was an incredibly close game.

“A similar thing happened with our final game against SUNY Geneseo, another really talented team, where they were up 3-1 within the first 20 minutes, and we had to dig down our heels and come back from behind again,” the captains explained. “But every single person on the team really gave it their all and showed incredible mental fortitude—something that’s really difficult to do when you’re so tired, under so much pressure, and starting from behind.”

Taylor-Klaus also expressed appreciation for how the team worked together to come back against Geneseo, as well as against RPI.

“Our really hard game was actually our semi-finals game: We played RPI, who we had lost two in the finals at sectionals, so it was redemption,” she said. “And then we played the finals, and that was an incredible game. We were playing SUNY Geneseo, and it was one of the best games we’ve played in a long time—super spirited, super competitive. It was a very close and hard-fought game, but it stayed super spirited.”

Both Taylor-Klaus and the team captains noted that regionals can be an even tougher competition than nationals because more is at stake.

“We pretty much have to go into regionals with the mindset of giving it everything we have,” the team captains explained. “Even compared to nationals, I think regionals feels like a lot more pressure. Each year we make it we’re just so overjoyed to be at nationals, and we’re pretty much happy with whatever results, but with regionals the goal is pretty clear.”

The team will go into the national competition with a number of players who haven’t attended the competition before. The team has been moving players up from the B-team to the A-team over the course of the season, both to gradually acclimate players to the level of play and because many former A-team members suffered injuries this season. Taylor-Klaus explained that there was some concern about the youth of the team, given that so many of the players were new.

“A lot of people were worried about this season because we graduated, I think, 13 seniors last year, over eight of which were on the A-team,” she said. “Some people were a little skeptical that we would be able to get back to nationals this year, they thought this year would be a developmental growth year.”

But Sofia Murtaugh ’21, a team president, noted that the young age of many members of the team is in some way an asset, as the new players put a lot of work into the team.

“This year, more than half of the team is underclassmen, but I think that actually helped us because of the general mentality of the girls,” she explained. “Since so many of us are fairly new to Frisbee and even Wes, we took nothing for granted and worked that much harder.”

Taylor-Klaus also noted that by splitting the teams into A- and B-teams earlier in the season than in previous years, the younger players could prove themselves even more.

“During spring break, we went ahead and did our A/B split, so the B-team could have played together as a team before Sectionals, because last year was the first time they played as just B,” she explained. “So we did the split a little early this year, and it was incredible to see the cohesion and the flow that we had…. Both teams had really good chemistry, which was awesome. It was a very new and young A-team, but it was very cohesive, and the chemistry was incredible.”

“Since no one saw us coming, even a lot of Vish members ourselves, we are pumped,” she noted. “We have the heart and wonderful girls no doubt and the cohesion, supportive atmosphere, and talented Frisbee players that I think will serve us extremely well in Texas. We won’t be disappointed no matter what happens, because we’ll be playing the game we love with the girls we love at the highest level possible.”