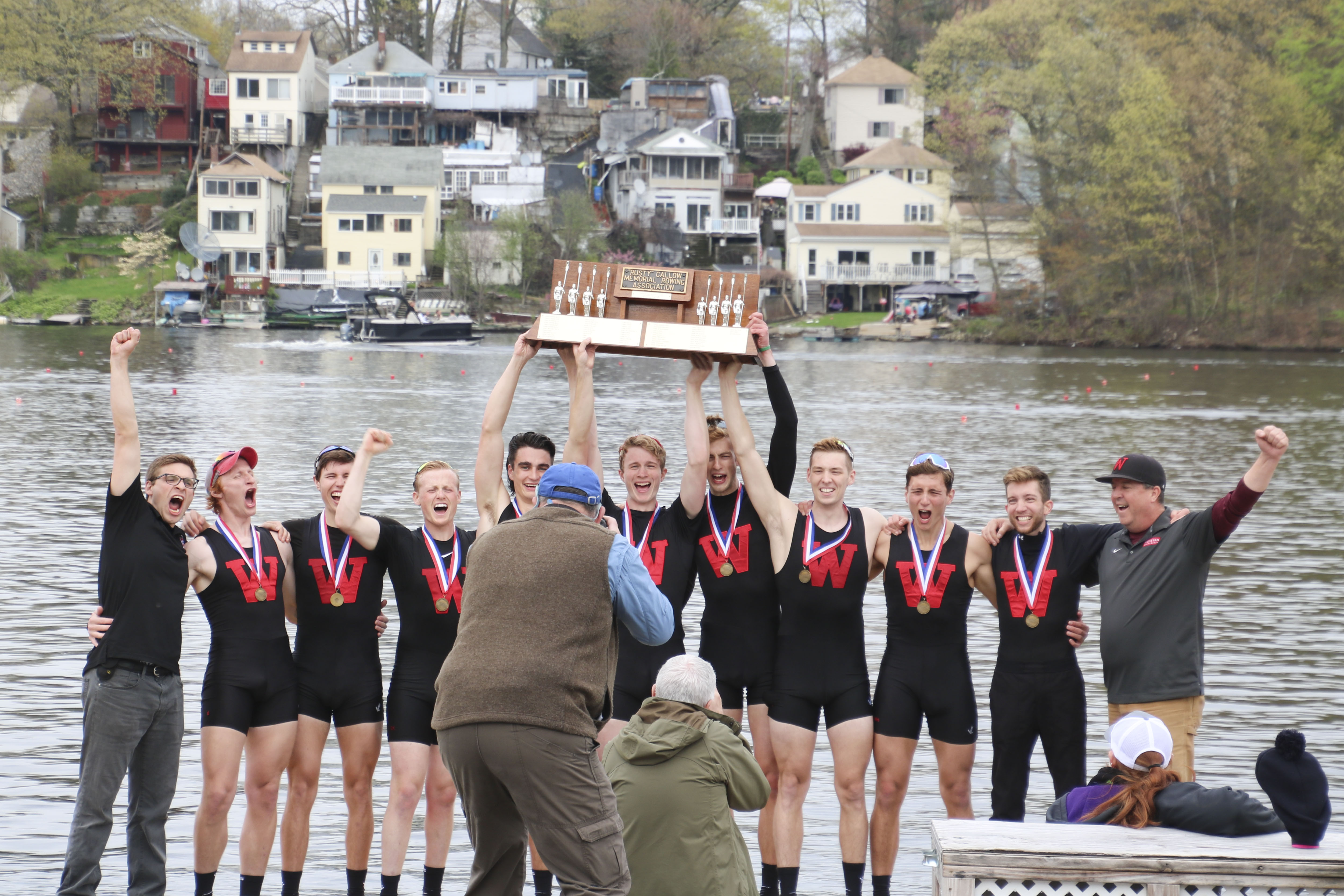 With spring drawing to a close, Wesleyan crew has been working devilishly to end their seasons on a high note.

On Sunday, April 28, men’s crew competed in the Norm Graf Cup against Trinity, Conn. College, College of the Holy Cross, and Saint Joseph’s University. The V8 and 2V8 boats were not victorious, each taking third place in their respective events, while the V4 had a decisive win over the rest of the pack, winning first place by a full 20 seconds. Overall, the team managed to defend the Cup by defeating NESCAC foes Trinity and Conn. College, despite not winning the race.

Women’s crew did not attend the Norm Graf Cup; they only participated in one regatta in the past few weeks, on this past Saturday—the 2019 New England Rowing Championships. The Championships took place on Lake Quinsigamond in Worcester, Mass., and involved a veritable plethora of competing schools, including fierce rivals Amherst, Williams, and Bowdoin.

The day was grey and fairly humid, which made for an all-around sticky situation when the women’s crew hoisted themselves into the water. The Varsity 8 boat finished with a time of 6:59.72, slipping infinitesimally from their last result of 6:59.17 at the Little Three competition. Unfortunately, although the V8 is clearly performing consistently, their competition was tough this past weekend; they managed to scrape by in fourth place.

The second V8 boat fared better than the first V8. At the start of the racing day, they managed to place first in their heat. Yet this momentum was not meant to last—the 2V8’s success sadly was stalled in their second race of the day, and they ended up securing fifth place. Luckily, they can take solace in having completed the race 1.67 seconds before Wellesley, Wesleyan’s lesser namesake. The 3V8 was the luckiest of the boats this past weekend, sailing ahead of Colby’s boat by 10 full seconds to become the winners of the “petit final.” The women’s crew tallied up 55.52 points in the team point standings, which earned them sixth place in the competition.

Men’s crew also competed in the New England Rowing Championships on Saturday, and their performance, in contrast, was anything but lukewarm. At last year’s Championships, the team finished in ninth place. The last time that Wesleyan won the New England Rowing Championships was in 2004, a full fifteen years ago. Yet men’s crew came to the competition with higher hopes this year, bolstered by their status as the No. 1 seed. Surprisingly, the rowers didn’t set their hearts on winning the regatta. Captain Ben Lynch ’19 remarked instead that the team went into the race focusing on friendship.

“We didn’t have any result-specific expectations going into the New England Rowing Championships,” Lynch said. “What we did have, however, was a ton of trust within our boat. The entire team has showed up and worked hard at practice every day since early September. This kind of commitment to consistent hard work breeds trust.”

As a result of their best efforts, Wesleyan now holds the title as the New England Rowing Champions for just the fourth time in history—after a fifteen-year hiatus. Despite the fact that their goal was not necessarily to win, taking home the title was no small feat. Lynch spoke of the win in glowing terms.

With this celebration finished, the team is looking forward to the final regatta of the season. On this Sunday, May 12, the teams will both return to their old stomping grounds in Worcester to compete in the National Invitational Rowing Championships. The competition will include most of the same teams that were at last weekend’s regatta.

Lynch says that the men’s crew will go into this final regatta with the same mindset they’ve been fostering all year. As a graduating senior, this will be his final collegiate competition, and he is both proud of the team’s accomplishments this season and grateful to them for their group dynamics.

“We had a motto for this last race: Do it for friendship,” he said. “I am incredibly grateful to finish up my rowing career in a boat and a program filled with friends.”