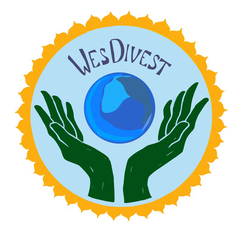 The movement to divest from fossil fuels has been sweeping the country, with many universities and colleges—including the NESCAC’s own, Middlebury—pledging to divest.

The divestment movement was re-invigorated at Wesleyan last semester, when student group WesDivest led an informational meeting in November to talk about its work. Since then, the club has worked to rebrand itself by separating itself from other divestment movements.

The club has also made their primary goal clear: to pressure President Michael Roth ’78 and the Board of Trustees into divesting Wesleyan’s endowment from fossil fuels. Also, by joining forces with Climate Action Group (CAG), WesDivest is currently pushing Wesleyan to commit to using 100 percent renewable energy by 2050.

This past week, the groups organized a panel discussion to stimulate conversation around divestment, climate justice, and climate change on campus. The panelists—Sanya Bery ’21, Professor of Earth and Environmental Sciences Dana Royer, Director of the Resource Center Demetrius Colvin, and Mya Valentin ’19—represented a variety of different groups on campus and provided various insights on climate change.

Divestment was a prevalent theme throughout the talk. Although the WSA recently passed a bill to divest the assembly’s budget from fossil fuels and to invest in socially responsible funds, Wesleyan as a whole has yet to divest. Roth and members of the Board of Trustees have cited various reasons for this decision, including a concern that Wesleyan’s decision to divest would not have a large impact on the fossil fuel industry, which would make the impact of the divestment largely symbolic. Bery, an Environmental Studies and government major who will serve as the chair of the Committee for Investor Responsibility for the upcoming academic year, refuted this reasoning by emphasizing the importance of symbolic action.

“Symbolic action is important specifically when we are talking about environmental change,” Bery said. “If we as a school say we don’t agree with fossil fuels, we’re going to attract so many people to this school who that resonates with…. It will just start a reaction.”

Bery also noted that Wesleyan has already divested from the tobacco and nicotine industry.

“We divested earlier from a lot of companies that are invested in nicotine because they [the Board of Trustees] were like ‘oh, that’s a health issue we don’t want to support that,’ but climate change is the biggest health issue we are going to face, ever,” she said. “It impacts everyone.”

When asked whether battling climate change would require a general shift in consciousness, almost everyone in the room nodded yes.

“I think that one of the things that makes climate change so difficult to respond to is that it’s so hard to visualize, especially because not only are the effects occurring in the long term, those effects occur so slowly over time,” said Valentin, a Studio Art and Environmental Studies major and the Spirituality and Sustainability Intern at the Resource Center.

“Part of that shift in consciousness has to be a way to visualize these effects,” Valentin said. “Change needs to happen in the sense of visualizing it, but also in the sense of being able to visualize it and connect it to why it would matter to you. I think everyone needs a sense of purpose in the cause, or else there’s no reason.”

In addition to a shift in consciousness, many of the panelists agreed there is a need for a shift in the way we define and talk about issues related to climate change.

“It also comes down to changing our language,” Bella Whiting ’21, the panel’s moderator and the manager of WesDivest, said. “We refer to [our consumption] as natural, like trees are natural resources. Inherently by referring to them as that, we are defining them as something we can gain from. We are not defining them as an entity of themselves, it’s defined because humans have something to gain from that entity, rather than them being beneficial to the earth as a whole.”

The panelists also pointed out that it is important to recognize climate change as a real issue in order to get people angry about it.

“If we make a stand and it is universally recognized as an issue, then those marginalized groups that are being targeted by environmental issues will be more legitimized,” Bery said. “It will be like ‘we recognize what is happening,’ and there will be more aid and support. If it’s an issue that is recognized globally, as like an actual health issue, or a security issue, I think it will change the conversation like how we speak about it, how we treat it.”

Throughout the panel, there were many opportunities for the audience to ask questions. At one point, an audience member raised their hand to ask a question on many people’s minds.

“When is it too late to do something about climate change?”, the audience member said.

“The climate has a lot of inertia in it… it’s very hard to make quick changes,” responded Professor Royer, who studies climate change on a geologic time scale. “And you can’t necessarily go back the same way you came. It takes more to get back to where you used to be.” As pessimistic as that may sound, Royer pointed out, we can still stop it from getting worse.

The question then arises: What can Wesleyan do specifically to fight climate change?

“I would propose there has to be…soul-searching…or from a more corporate standpoint, a values assessment,” Colvin said. “Really matching up where are the actions and money is going and how does that match on to the Wesleyan vision statement about views…. We need to rebrand this idea of what is Wesleyan.”

“What’s ironic is that Wesleyan is profiting from an image of social justice-slash-socially responsible university and a lot of its actions are not lining up with that,” Bery added.  “So I think a lot of what student action could do, as a diverse student body, is emphasize the difference between what you said, how we present ourselves as a school and what money they are investing.”

Ben Silverstone, an attendee of the panel and a member of CAG, echoed Bery’s sentiments.

“I think in the wake of our most recent climate assessments and reports—the IPCC [International Panel on Climate Change], for example…a University that is committed to the future of students of young people should be taking climate change extremely seriously,” Silverstone said. “[It’s important to] specifically have climate change as part of their mission statement, because if they care about the success of students of a future generation, then they care about climate change. That just has to be explicitly stated within what it means for young people to flourish in the coming decades.”

Note: This article incorrectly identified the IPCC in its initial publication. It is the International Panel on Climate Change, not the International Plant Protection Convention. The article has been updated to reflect this correction.