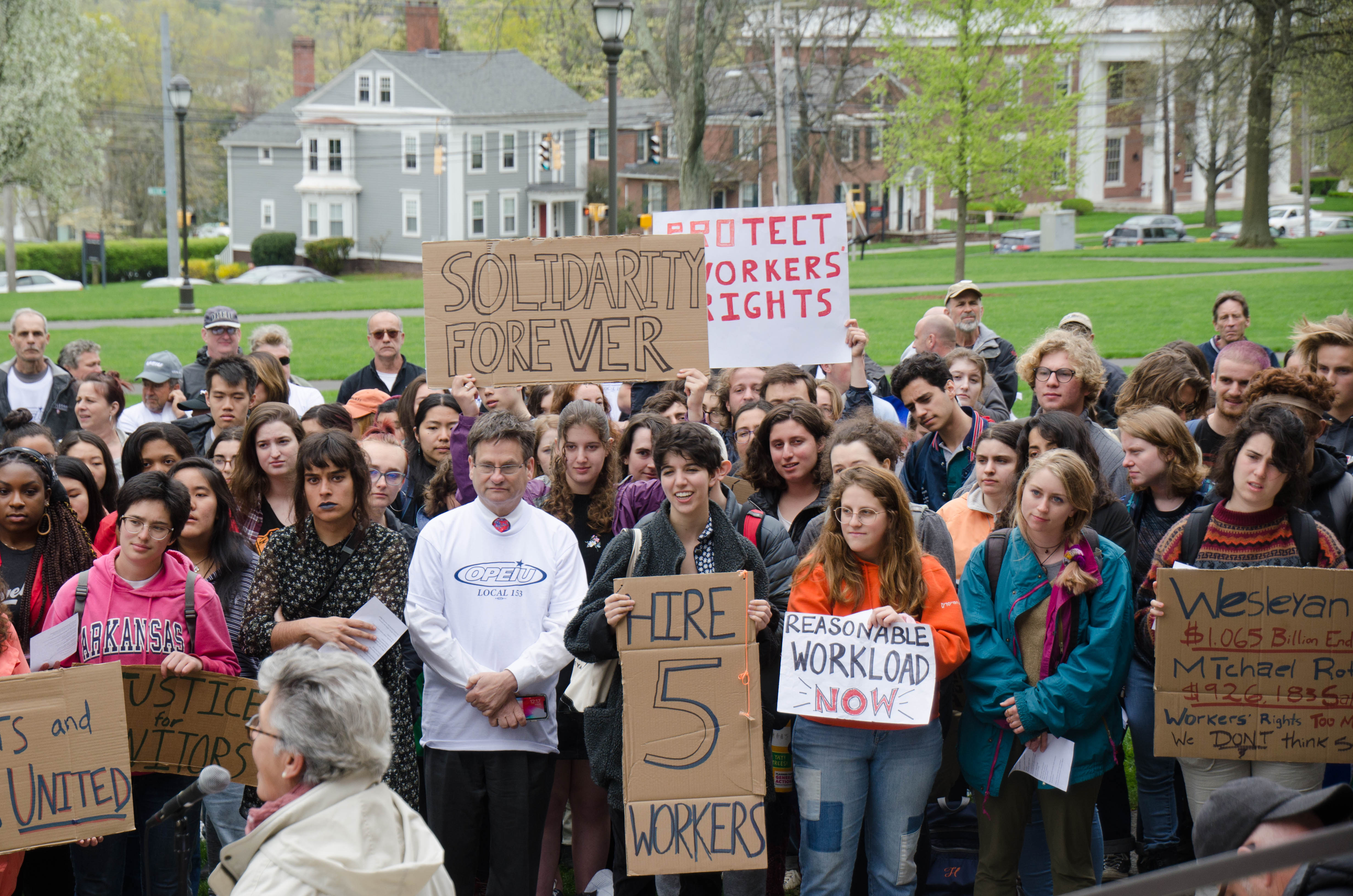 The Friday rally is part of ongoing efforts spurred by USLAC’s allegations that janitorial workloads are unreasonable and argument that a decrease in the number of janitorial staff from 60 to 50 has limited the staff’s ability to fulfill their responsibilities.

At the start of the rally, Rosario Caicedo was introduced as the translator for the various speakers who spoke in Spanish. She is a member of Middlesex Immigrant Rights Alliance (MIRA) and Unidad Latina en Acción (ULA), and her work is focused on defending immigrants across the country who are seeking justice under the current federal administration.

USLAC member Emma Llano ’19 began the event by speaking about her involvement in advocating for workers’ rights at Wesleyan.

“My journey as an organizer began more than two years ago when I sparked a conversation with the woman who cleaned the program house I lived in, and it has snowballed into this moment,” Llano said. “Over those two years, I have not only gotten to know many janitors as organizers and workers, but as friends…. I’ve heard it all. But one thing has remained the same: Janitors on this campus are overworked.”

Physical Plant workers attended the rally wearing shirts and holding signs representing their union, Local 153, OPEIU. Two Physical Plant workers, Gene Payne and Pete McGurgan, who have worked at Wesleyan for 27 and 18 years, respectively, spoke in support of the janitorial staff and also addressed issues regarding their own staffing and the consequences associated with the University’s decision to subcontract its labor.

McGurgan is a heating, ventilation, and air conditioning technician and has been working at the University since 2002. He spoke at the rally about his time at Wesleyan and the similarities he sees between Physical Plant employees and janitorial staff members.

“As we kept talking, we realized that [custodians’] issues are so similar to some of our problems,” McGurgan said. “It’s almost like a mirror.”

“It felt great to be there with everyone…and hopefully get some word out,” McGurgan said. “I didn’t want to overshadow the focus of it being for the custodians, but at the same time, I didn’t want to miss the opportunity to shed some light on the similar stuff that we deal with.” 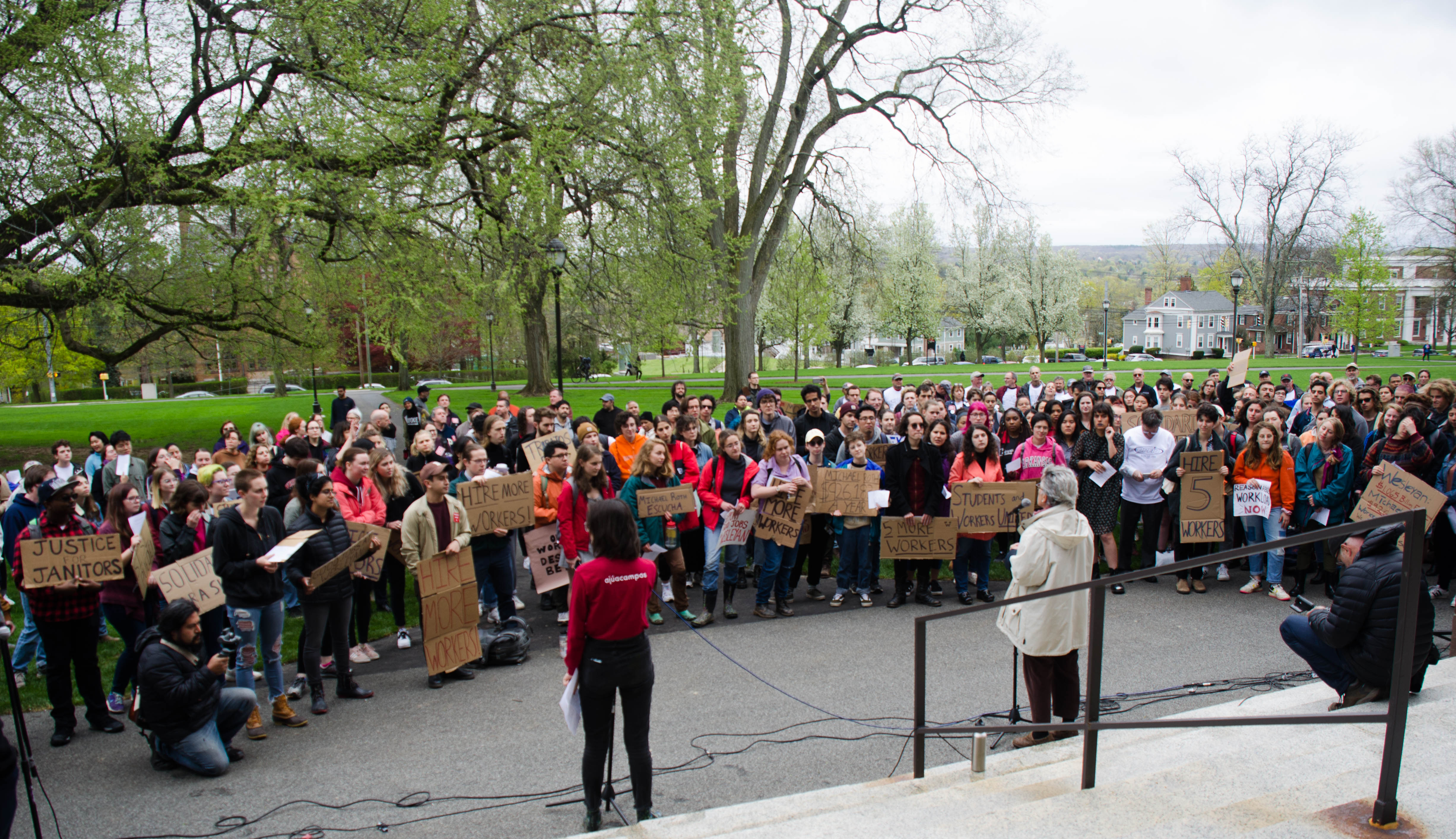 A janitorial worker who works in Bennet and Fauver spoke to the crowd and thanked them for their support.

“She wants to thank all the students for all the help that they have gotten because it is impossible to do it alone,” Caicedo said, translating for the janitorial worker. “The workers need the solidarity. What she feels is that what the University is doing is incredibly unjust to the workers and to the students. They need more workers to continue keeping the campus clean and safe. And once again, she wants to thank all of you.”

Connecticut State Senator Matt Lesser, who represents Middletown, also spoke to the crowd and voiced solidarity with the workers at Wesleyan and USLAC’s efforts. Lesser was a member of USLAC during his time at the University, and he spoke to the importance of advocating for workers’ rights.

Various chants in English and Spanish filled the space between speeches.

The final speaker for the event was John Jairo Lugo, who is an influential activist in New Haven for ULA, a grassroots organization based in New Haven that fights against human rights abuses faced by immigrants. He won the Emerging Change Champion award from the Center for Community Change for his support of immigrant families, fighting against wage theft and promoting criminal justice reform. He voiced ULA’s solidarity in the struggle that USLAC and the janitorial workers are now facing.

“This is a very good message because the president of this University, who is earning one million dollars, should know that there is enough money here to pay five more workers,” Caicedo said, translating for Lugo.

*Names have been changed.