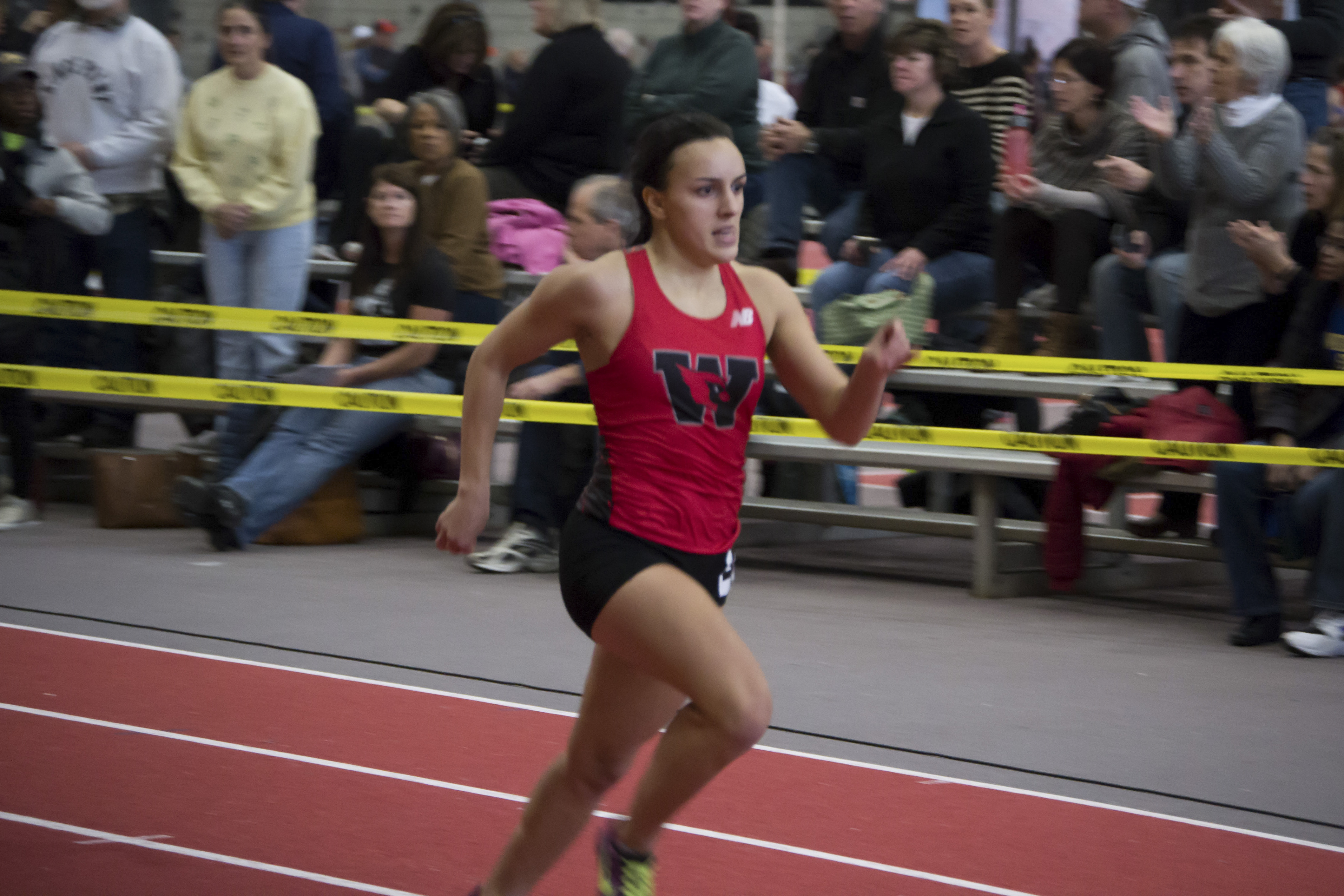 Jenny Aguiar ’19 has excelled at track and field since her freshman debut in 2016. Dedicated to sprinting, Aguiar’s main event is the tough 400m race. She also runs the 100m, 200m, and 600m. Last season, Aguiar placed first in the 600m, contributing to the Cardinals’ eighth-place finish at the New England Division Ⅲ Championships. This year she made it to the NCAA Division Ⅲ Nationals, placing eighth in her event and earning her All-American honors. The Argus sat down with Aguiar to discuss her track and field career and her time at Wesleyan.

The Argus: How have the NESCAC Championships this weekend gone? How have you done in your races?

Jenny Aguiar: NESCAC was the coldest and windiest NESCAC I’ve ever competed in, but it really came down to who had the most grit. I was so proud of my team. Watching the 10k girls compete in 35-degree rainy weather was inspiring. We also had two NESCAC champions on the women’s side which was so exciting. In the open 400m, I raced really hard and crossed the finish line first. I pushed like hell. In fact, it was my first time ever in NESCAC to cross the line first. However, another first in my life, was that I ended up being DQed [disqualified] from the race 30 minutes after I thought I was the champion for a lane violation, so it was definitely a heartbreaking moment, to say the least for my senior year. However, the season goes on, with even bigger meets to focus on.

A: When did you start running? Is it always something you’ve excelled at?

JA: I started running when we had to in gym class in middle school, where I ran a six minute mile. I started doing cross country and then joined track. It’s interesting to think I started off running as a distance runner and I am now a hardcore sprinter.

A: How have you balanced academics and student-athlete life? Is there something you wished you could have done but track and field got in the way?

JA: Track and field actually keeps me more on schedule. With more on my plate, I am forced to stay on a timely and consistent schedule, and that just doesn’t leave room for procrastination. Track and field is certainly time-consuming, but I don’t like to think about alternative situations because I couldn’t picture my life without running. So sure, I would’ve loved to be more engaged in the music community here at Wesleyan, I wouldn’t say track “got in the way,” rather, music will have to wait a bit. Being a collegiate athlete is short-lived, and music will always be there.

A: In your freshman year in an interview with The Argus, you said, “I’m really excited about the potential of the team.” How has the team changed over your time at Wesleyan?

JA: The team is always evolving, and adapting to who we get and who graduates the team. I would say our team has changed to a really heavy mid-distance-oriented team. We have so many 400m runners, on both the men and women’s side. It’s quite incredible to see how competitive people are even in practice, which makes us stronger and better athletes for meets. Our team has also changed its energy, and positivity. In track and field it’s easy to get down on yourself because it’s so often thought of as an individual sport. However, we have worked really hard to be a cohesive and team-oriented community, that has unleashed so much more depth than we knew. For example, this year we had six people compete at NCAA, the most Coach Curry has ever brought in his time here. I think it has a lot to do with positive energy in practice, as well as the competitive nature we encourage.

JA: First joining the team, my goals were, and still are, just always do the best I can each year. I wanted to improve my times whichever way possible. However, as my times started to develop, I wanted to win championships, and make it to nationals one day. This year, I reached my goal, and more. I made it to nationals and placed eighth, making me All-American.

A: As a captain, do you think you’re leaving the team in good hands?

JA: Absolutely. I am really confident in this team, and especially with our current powerhouse freshman class. They’re incredible, and their personalities and work ethic remind me of how our class was freshman year. They’re great leaders, and they’ve only been on the team for one year. I’m excited to stay updated with the team after I graduate.

A: How does it feel to be winding down at Wesleyan? What’s next?

JA: It’s definitely unsettling, but I’m excited for what’s to come. Next year I will be working as a consulting analyst for Accenture, and I plan to join track clubs in Boston.