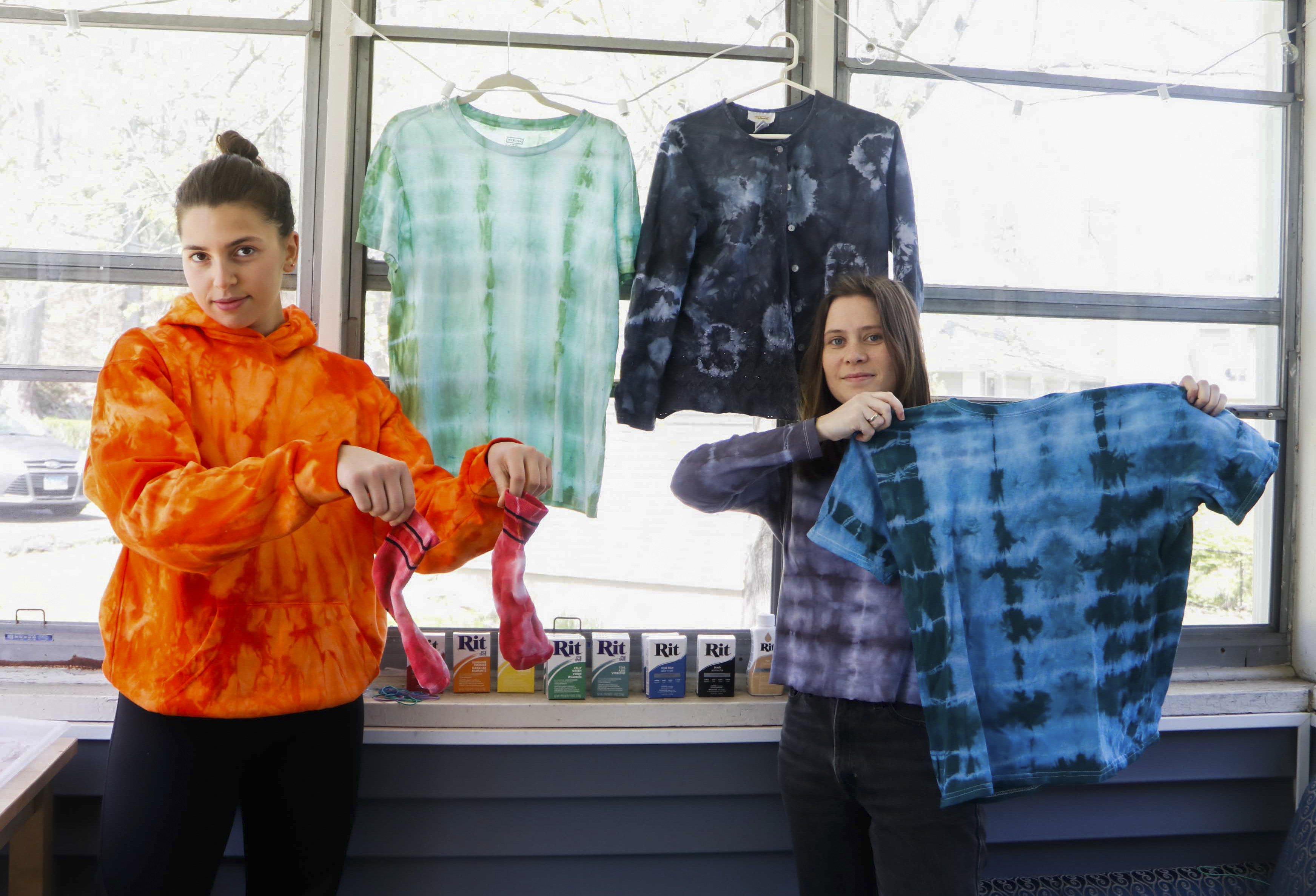 “It started as a joke, and then we took it too far,” said Elliot “Ali” Dawes ’19, Head of Sales and Distribution for DyeHard.

The new frontier of tie-dye fashion, DyeHard is a trendsetting student-run company looking to disrupt Wesleyan’s fashion scene. Since their inception one week ago, DyeHard’s Instagram has already hit 103 followers, and the company has received over 25 orders.

Although DyeHard has enjoyed a rapid expansion, the company’s founders still acknowledge their humble beginnings.

“I wish our origin story was more exciting,” Chief Executive Officer Isabel Keene ’19 said. “Basically, Charlotte [Klein ’19] and I went to Michael’s a couple weeks ago and purchased tie-dye. We’re both pretty crafty and were excited to experiment with this medium we were unfamiliar with. And then I made a tote bag and a shirt, and it was fun and easy. I asked around to see if people would be interested purchasing any of our products—”

“Kind of as a joke,” Dawes interjected.

“Yes, it started as a joke,” Keene continued. “And we got a pretty positive response. So, we decided to expand. This came at a time when Charlotte had just finished her thesis, Ali was concussed, Allegra [Lorenzotti ’19] hasn’t really been here this semester, and we were all just trying to take advantage of the good weather. It seemed like a fun activity, and we were interested in making a little profit.”

DyeHard’s process is unique and meticulous. As Dawes describes, customers fill out a Google Form with their order, which DyeHard then moves into a spreadsheet. The team then tie-dyes the pieces—taking care to fit every tie-dye design to each customer’s personality—and arranges for delivery or pickup.

The DyeHard team hopes to drop three cycles of orders before the end of the year. Within these three cycles, there are custom and curated orders. For a custom order, customers provide a specific piece of clothing to be tie-dyed; for curated orders, customers pick an item from DyeHard’s collection.

“We just finished on Friday the first cycle of custom orders, and then this week at some point, we will drop our first curated collection, which is separate from custom—which is just pieces that we have fun experimenting with and that are really our creative direction,” Chief Marketing Officer Allegra Lorenzotti said. “Those will be like six to nine pieces, and those will be up for sale on the ’gram. But then we’ll have two more cycles of custom orders where people can request what pieces they want and what color preferences they want, and then we will be closed.”

A key part of DyeHard’s business is its sustainability. Recognizing the tremendous waste produced by the fashion industry, the company only uses pre-owned pieces and usually finds their clothes at the local Goodwill or Savers.

“Basically, we saw space in the market, [because] you have high fashion tie-dye, and then you have places like Zara that are commodifying these high-fashion tie-dyes, but they’re not sourced sustainably,” Keene said. “You have high fashion that offers very expensive tie-dyes—you don’t want to spend $200 on a tie-dye shirt. So we wanted to offer things at fast-fashion prices for consumers who care about their [carbon] footprint and where their clothes come from.” 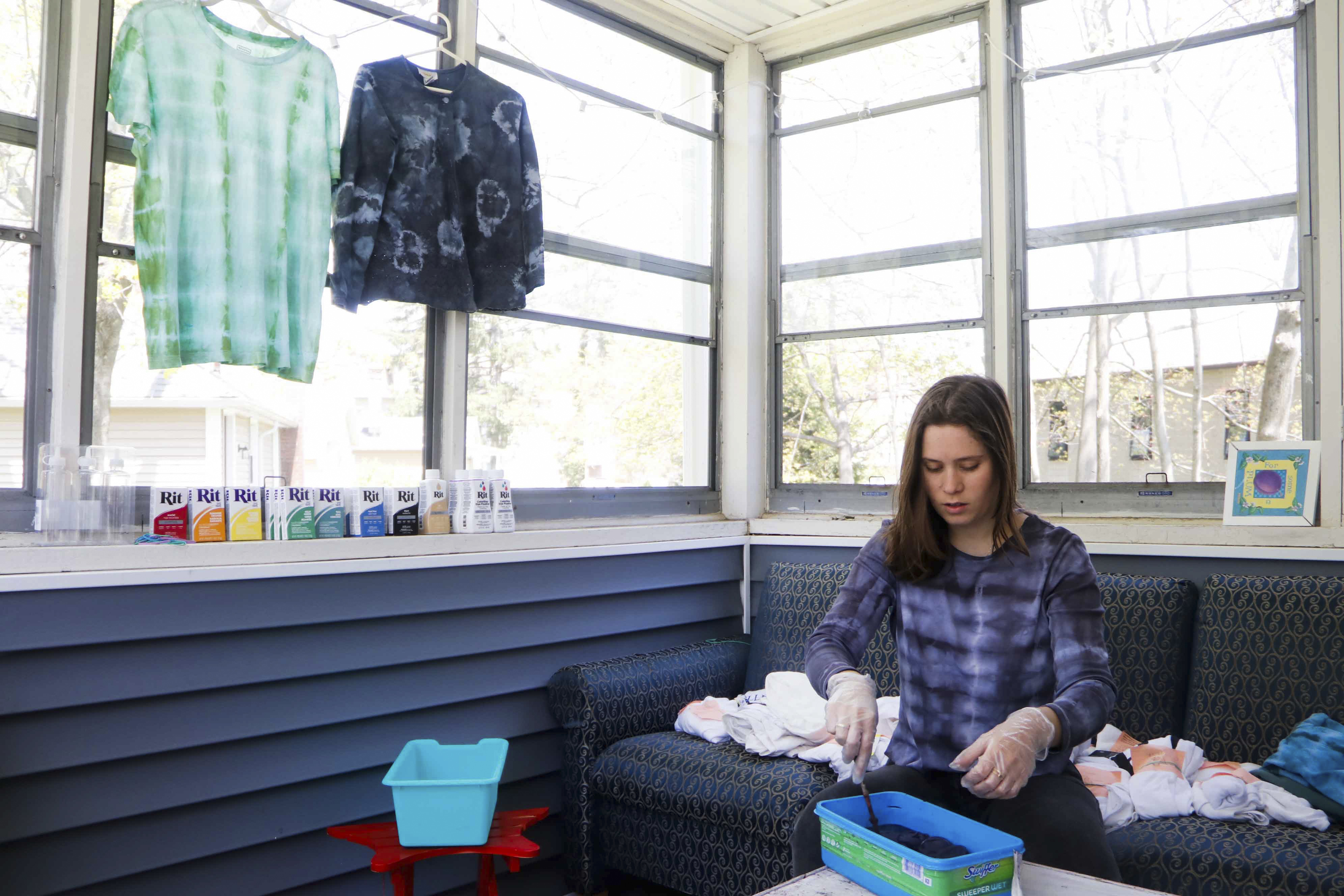 DyeHard also prides themselves on their sophisticated marketing campaign. Since Lorenzotti works in social media, she has taken DyeHard’s various platforms under her wing and intends on reimagining DyeHard’s digital presence.

“The vision is going to change a little and be a little more refined in the future because I’m professional in this realm of things,” Lorenzotti said.

Despite their streamlined tie-dying process and organized media strategy, the business has undergone substantial administrative change. Dawes, who started as a low-level tie-dye artisan, climbed the corporate ladder after Keene saw her potential.

“I thought it was a good idea from a publicity standpoint [to show] how many opportunities there are for upward mobility within our management structure,” Keene said. “[Dawes] proved herself and also begged me for more responsibility. It made sense to delegate something to her that was very customer-facing.”

“She proved herself quickly,” Lorenzotti added.

Then, the team decided that Klein, who at the time was serving as Chief Financial Officer, wasn’t exactly what they were looking for in a CFO.

“Charlotte was initially CFO,” Keene said. “It was a huge mistake. She ran out on us to go to the gym when we were trying to take company photos…. Anyways, the point of the story is that Charlotte went to Goodwill, went way way way out of budget, and that really confirmed for us that her rightful place in the company is to be siloed to production.”

“She really does have a creative vision, though,” Dawes added. “She said that she’s very inspired by Bruce Willis.”

“Yeah, but it just made sense for us to not get involved with her creative process and, in turn, have her not at all get involved in management decisions and our financial decisions,” Keene said.

Additionally, DyeHard encountered some difficulties with their summer intern.

“We did have an incident,” Keene said. “We opened the application up for an unpaid summer intern. Sonia [Frank ’19] was on the job—”

“—this was really a lesson that it’s great to work with your friends, but you also need to be careful about setting boundaries and knowing when professionalism comes first,” Dawes interrupted.

“Yeah, she fell asleep on the job,” Keene said.

“She took a four-hour nap during our custom drop and was promptly let go,” Dawes finished.

Frank has struggled with DyeHard’s firing process, however, and wishes that DyeHard let her go in a more empathetic fashion. But Frank isn’t resentful and still respects the company.

“I was dropped from the DyeHard team without notice,” Frank said. “I understand that there was misconduct on my part, but I feel like part of their company culture is to be transparent, and as I’m getting interviewed for this article, this is the first time I’m hearing about my firing. But honestly, I wish them well in their creative endeavors, and it was truly an honor to be a part of such a dynamic female-identifying team.”

Frank expanded on the power of DyeHard’s female entrepreneurship and the need for more female-led fashion brands on campus.

“I feel like there’s a monopoly on streetwear and fashion on this campus, or at least it’s mostly being created by men,” Frank said. “There’s Millinsky [Alexandre Daillance ’19], there’s Nate Antoine [’21]’s stuff, there’s Ben Schneier [’21]’s stuff, and there’s WesWorn stuff. I think it’s time for more female-identifying students to really make their mark on this campus, and DyeHard is doing that.”

As the semester comes to a close and DyeHard’s team looks toward graduation, the group reflected on the future of their beloved company.

“The band is not breaking up,” Lorenzotti concluded. “We’re not having a Fleetwood Mac moment.”