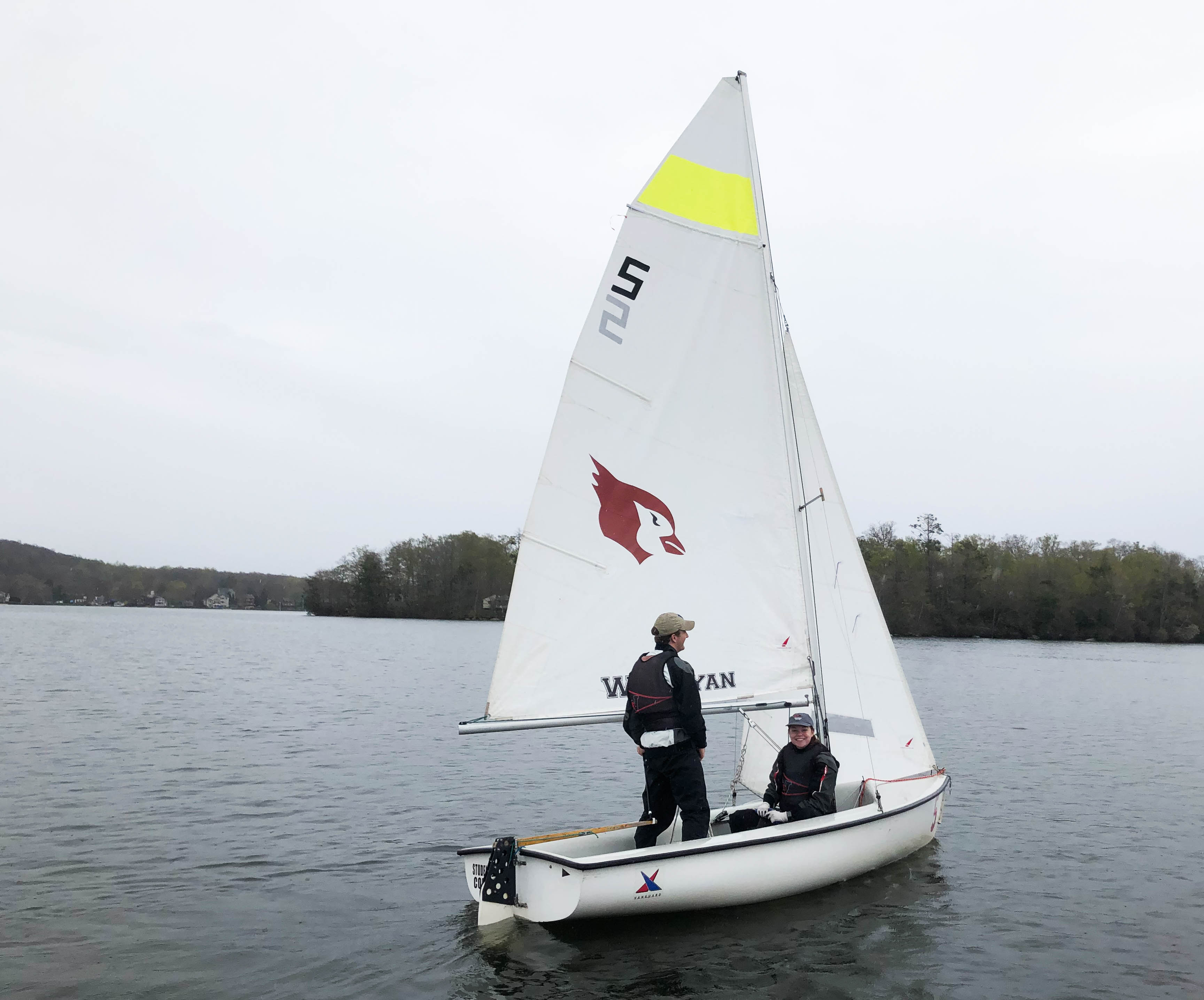 On Sunday, April 28, the sailing team concluded its 2018-19 season with the fourth annual Wesleyan Invite Regatta. The team competed against five other teams from across New England on Lake Pocotopaug in East Hampton, Conn.

Despite the dreary weather, expectations were high as the team began its only spring regatta as the defending champions. This year, Amherst, Williams, Sacred Heart University, Fairfield University, and University of Massachusetts Amherst traveled to East Hampton for the regatta.

On Sunday, racing began just before noon, with “A Group” sailors, Owen Moore ’21 (skipper) and Danielle Rothschild ’19 (crew) racing for the Cardinals. The first race was slow, with low winds posing a challenge for all teams. Moore and Rothschild came in fifth, ahead of Williams and behind Fairfield. After a little bit of sulking from Moore and Rothschild, followed by some gentle encouragement from Wesleyan coach Gabe Mahler-Haug and their teammates, they began the second race with a stronger start and placed third.

After the first two races, the teams rotated their “A Group” sailors with their “B Group,” and Nalu Tripician ’22 (skipper) and Sarah Levi ’19 (crew) headed out on the water. Levi, who is one of the team’s captains and has been a member of the team since her first year, sailed with Tripician for his first ever regatta as skipper.

“It was so fun having sailed with Nalu his first week on the team, and then again in my last regatta at Wesleyan and see how much he picked up and how talented of a sailor he’s become in such a short time!” Levi wrote in an email to The Argus.

With constantly shifting winds still posing a challenge for the sailors, coach Mahler-Haug (with help from his unofficial assistants, Caroline Salim ’21, Sophie Talcove-Berko ’21, and Argus lake correspondent Claire Isenegger ’21) had to adjust the course multiple times before the third race could begin. In the third race of the day, but their first race together, Tripician and Levi managed to finish in fifth place.

By the fourth race, however, the Red Birds began to find their stride. Tripician and Levi began the race with a strong start. By the fifth race, the Cardinals had swooped into fourth place, where they snuck ahead of Fairfield at the last moment for a fantastic finish.

“I think the best moment for me personally was during my last race we overtook two boats in the last two legs of the race,” Tripician wrote in an email.

For the sixth and final race of the day, the “A Group” returned to the lake, with Dominoe Jones ’19 replacing Danielle Rothschild ’19 as crew for Moore. They managed to secure a win, much to the team’s excitement.

After all six races, Wesleyan finished up the regatta in fourth place, with Sacred Heart taking first place, UMass Amherst in second, and Amherst in third. The Cards finished ahead of Williams who placed fifth, while Fairfield finished sixth. Despite not winning the regatta, members of the team told The Argus how pleased they were with their performance.

“The regatta yesterday went swimmingly, especially considering no one capsized,” Moore, who will co-captain the team next year, wrote in an email to The Argus. “We finished with a spread of last-place finishes, first-place finishes, and mid-fleet finishes, proving Wes sailing can truly do it all!”

The sailors also reflected on all of the fun they had throughout the past year. Sailing, which is a club sport at Wesleyan, prides itself on inclusivity and welcomes all students regardless of sailing experience.

“I’ve loved that this year’s team has been a lot closer and had a lot more fun with each other than past years, and I’ll be sad to leave the team following my graduation next month,” Rothschild wrote in an email. “We’ve had a lot more team bonding this year and hopefully that sets a good precedent for the future!”

Even students who did not race at the regatta told the Argus how much they valued their time on the team.

“Having never sailed before, they welcomed me to the team and encouraged me to go to regattas and learn,” Salim said. “Even with the rain yesterday, everyone was in high spirits and it was fun to watch all the teams compete on the Paug [Lake Pocotopaug].”

“Wesleyan Sailing has the best banter and camaraderie on campus,” Talcove-Berko wrote.

Mahler-Haug, who officiated and coached his first college-level regatta on Sunday, echoed some of the team’s positive sentiments.

“This is the funnest team I’ve ever coached,” Mahler-Haug said.