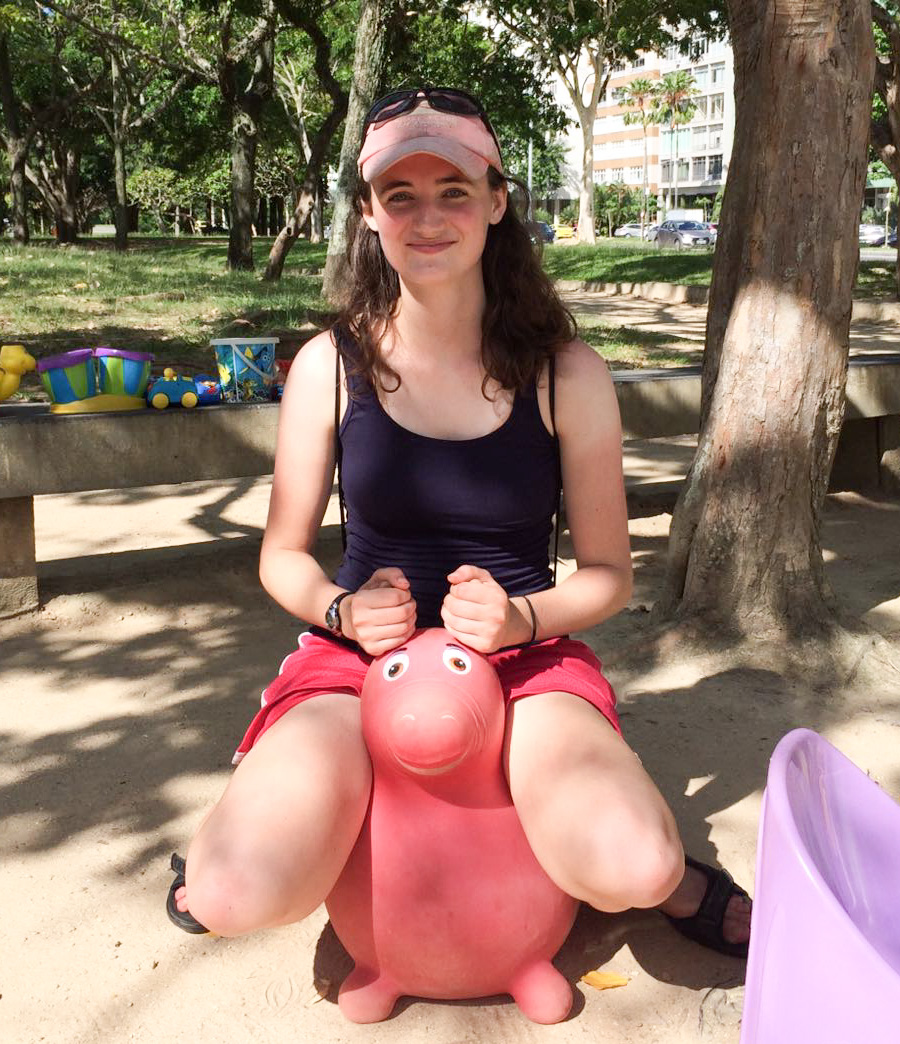 When Sara Philippe ’19 isn’t tutoring students in Middletown, she’s usually standing on tables in Usdan or riding her bike around campus. The Argus sat down with the history and Romance Languages & Literature double major to discuss her thesis, her outgoing personality, and her time studying abroad in Brazil.

Sara Philippe: I think I was nominated as a WesCeleb because I am very loud and obnoxious and make myself known in that way.

A: That’s something great to be known for!

SP: Yes. Well, mostly I think I have really good friends who love me a lot. It was very sweet of them, and they feel like I’m important on this campus.

A: That’s a feat. What are your majors?

SP: History and Romance Studies [Romance Languages & Literature]. I always tell people just “romance,” or sometimes just “love” so no one knows what I’m talking about. It’s a little-known major so I’m just like, “Yeah, you know, love.”

A: Have you liked that major?

SP: Yeah, I really like it. It’s so cool because I just love learning languages. It’s what I love most. So I get to do that that way. It’s pretty easy to do if you just take a lot of languages.

A: What languages do you speak?

SP: I speak Spanish, Italian, and Portuguese. I have also taken Arabic throughout my time here.

A: Do you take all of these languages at Wesleyan?

SP: Spanish, Italian, and Arabic have all been here, and then Portuguese I never took here, but I did before I got here and over the summer. Then I went abroad in Brazil and did a lot of Portuguese there.

A: Are you involved in clubs on campus?

SP: I am a coordinator of Wesleyan’s middle school tutoring partnership. That’s what I’ve been involved in since the beginning of freshman year. I started tutoring, and then starting junior year through this year I was a coordinator with the wonderful Sophia Antonio ’19 and Paul Willems ’20. So that’s been my main thing on campus. It’s a really great program that I care a lot about.

A: How have you seen yourself grow throughout your time at Wesleyan? Do you wish you’d gotten more involved with anything, less involved in anything, or tried something different?

SP: I’m very happy with exactly what I did. I’ve had an amazing time. I don’t know, I feel like people don’t think I’ve grown because most people think I’m a freshman or a sophomore. So this article will probably be a surprise to a lot of people who don’t think I’m a senior.

A: I don’t think you carry yourself like a freshman at all!

SP: [laughs] Just ask my Italian class. But I think I’ve grown in terms of interpersonal relationships. I’m always trying to be a better, kinder person. That’s more important to me than academics or anything else. Just like, my friendships with people and interacting with people, expressing love to people, making people feel special, and that kind of thing I feel that’s maybe why people know me on this campus—just like being very present and enthusiastic about people.

A: Has there been any moment this year that’s been a quintessential senior year moment? I feel like you must have one.

SP: [laughs] I don’t know what’s appropriate and what’s not. It’s so hard to think. At the end of everyday I just think so much has happened, because I’ve stood on five tables and yelled and heckled people and have five new friends. So it’s hard to remember. I don’t know, I had a great time on the day theses were due.

A: Oh, you wrote a thesis! Tell me about that.

SP: I wrote a history thesis. I actually lied to most people about it. Most people think it was about brothels throughout time. But the truth is coming out. I wrote about a colony of Confederates who emigrated from the U.S. to a city in the Amazon after the Civil War.

SP: There’s not a lot of scholarship on them, so I kind of randomly heard about them in a class that I was taking first semester junior year. I ended up going to the city that I wrote about while I was abroad. After I was abroad I stayed and traveled to do research there. I was just super interested in the idea of people who were once slaveholders or members of a slaveholding society who could not fathom the idea of staying in a place where they could no longer hold slaves or live in a slaveholding society. So I was just fascinated by the idea of going to a place where it was still legal—which it was, in Brazil—and just looking at how that community worked. And also the idea of going to the Amazon because there are so many ideas throughout history of colonization of the Amazon and it’s this little-known thing that there are actually Americans that enacted a plan to colonize a small part of the Amazon.

A: Did you enjoy studying abroad in Brazil?

SP: Yes, I had the time of my life in Brazil. I love it so so much. It had been a dream of mine to go there, and I think Portuguese is absolutely the most beautiful language. And so it was amazing to just spend a semester of my life speaking Portuguese every day. And I think Rio—that’s where I was—is the most beautiful city. It was so amazing to be there, and I’d love to go back and spend time there again. Highly recommend.

A: What other communities are you involved in on campus? What’s your typical day like?

SP: I wouldn’t say I’m involved in a lot of communities, besides all the secret societies and sororities I’ve started. Not to mention WesBrothel. Have you heard about WesBrothel?

SP: WesBrothel has been a major activity of mine. It’s getting more and more known, and I hope someone will take the lead. It’s a thing that, I can’t really give away information, it’s like WesCam. But that’s something I’m very proud of. The word hasn’t gotten out about that. But anyway, I would say my typical day…mostly, when the weather is nice, I go for a bike ride. That’s a big part of my life here, it’s so beautiful. I think it’s underrated, how many beautiful areas there are around here. The road, mountain biking. I spend a lot of time in Usdan; it’s kind of a trap for me. I come here, and three hours have gone by, and I’m sitting at the same table. I’m also ubiquitous in Olin. I’m sure it’s been hard for people, not seeing me in Olin the last week. People are probably really struggling. But also probably getting more work done.

A: What’s been your favorite class at Wesleyan?

SP: I’ve got a few. One of my all-time favorites at Wesleyan was a Cervantes class, a Spanish class with Professor Michael Armstrong Roche. It was the kind of thing that I had no idea what I was getting into when I started the class. But I ended up having so much fun in that class. We just read Don Quixote, and I’m not exactly the most literary person, but that was a really amazing class. I got to have a lot of fun, be a little silly, and get away with it. I would just say any class with Professor [Demetrius] Eudell is my favorite class. I always tell everybody that everyone should take a class with him before they graduate. So that’s my plug for Professor Eudell.

A: Were you always this outgoing?

SP: I think it became more pronounced in college. I think, starting freshman year into now, it’s been pretty consistently. I was very, very outgoing as like, a small child. And then I became a little bit more subdued, maybe, in the middle years. And now I’ve reverted to my three-year-old self. But also, I think being on a campus like this, where it’s easy to get to know so many people and feel like you know everybody…. It’s easy to feel very comfortable.

A: Would you offer advice to your freshman self?

SP: I think I feel exactly the same as my freshman self. [laughs] I guess I would say to do exactly what I did. Just to have a good time, and not take things too seriously.