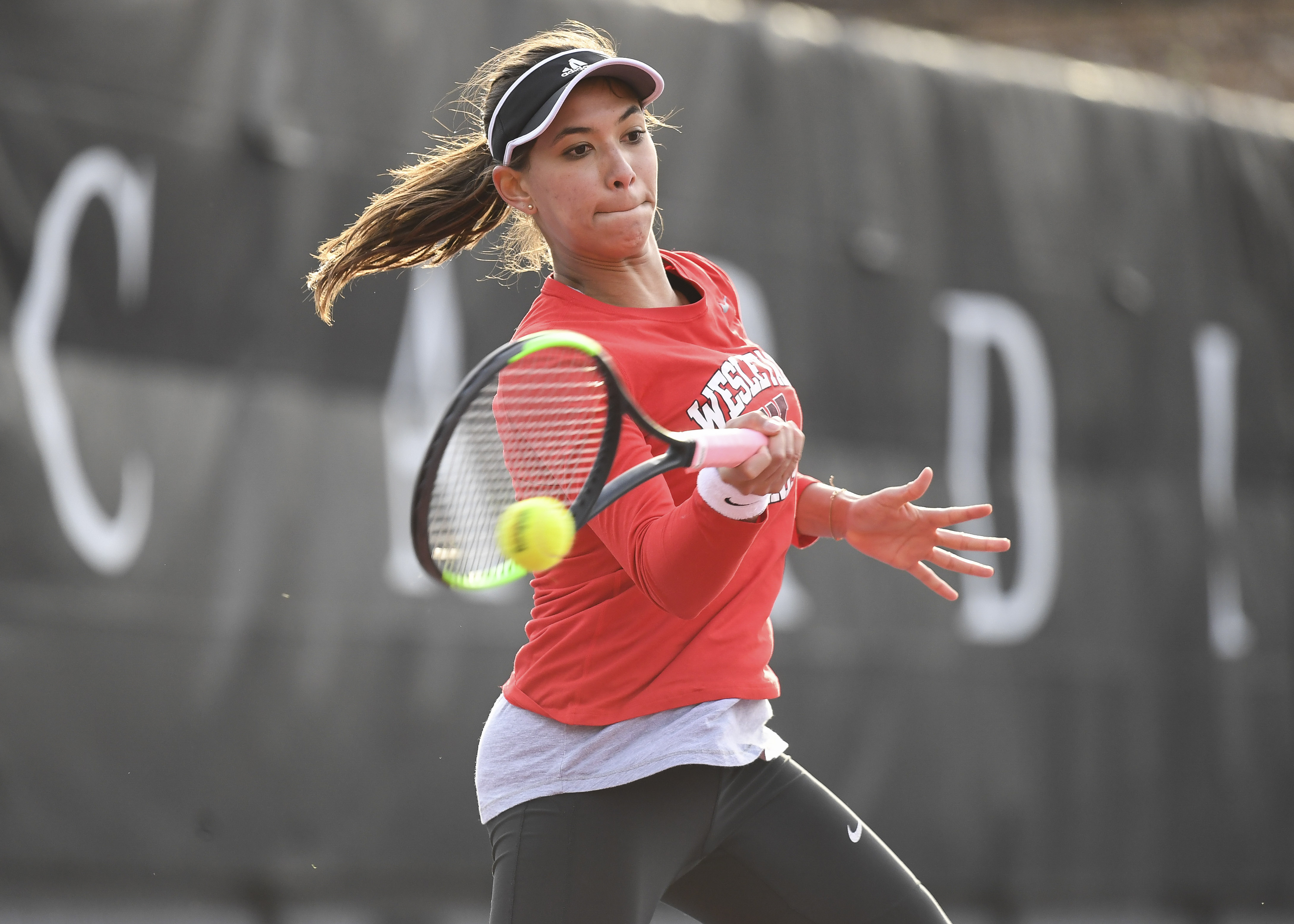 Throughout the spring season, the women’s tennis team has showed remarkable strength, depth, and skill. The team has an overall record of 10-2, dropping matches only to Middlebury and Emory. Even the losses of the season were hard-fought, impressive matches, and the team has never failed to continue its momentum, hardly missing a stroke as they trounce opponent after opponent.

On April 13, the women sailed past NESCAC rival No. 9 Williams to an 8-1 victory. The doubles performances of the day predicted the road to success, as all three doubles matches worked their way to somewhat easy wins. Sisters Victoria Yu ’19 and Kristina Yu ’22, the number-one ranked team in the Northeast, took their match 8-2, employing their strong groundstrokes to overpower the Ephs. In the second doubles spot, Polina Kiseleva ’21 and Venia Yeung ’22 handled the challenges presented to them in stride, combating Williams’ lobs with swinging volleys and overheads, eventually earning an 8-4 victory. At third doubles, Alissa Nakamoto ’21 and Alexis Almy ’22 pulled their match out as well, taking an 8-5 win. These three successive doubles victories paved the way for their fellow Cardinals to take the rest of the match, and indeed, Wesleyan claimed five of six singles spots with ease.

In their most recent endeavor, the Cardinals faced off against No. 7 Amherst, another NESCAC and Little Three rival. The women set out determined to claim their first Little Three win, a title the team has never taken in its entire 50-year history. The Cardinals succeeded with brilliant performances across the board. While the match presented some challenges, the Red and Black responded gracefully; Wesleyan took an early 4-1 lead, but the Mammoths did not give up and pushed the Cardinals at first doubles, as well as at first and second singles. Almy clinched the victory at fifth singles with a decisive 6-2, 6-1 victory. The team showed incredible firepower and determination through these two matches, and was rewarded with the coveted Little Three title.

“[Winning the Little Three title] was such an exciting and special moment for the team and coaches,” Almy said. “We had been training hard for this season and are so happy to get this historic win for Wes.”

The future looks positive for the women’s team as they look toward the end of their regular season. This weekend, the Cardinals battle Colby and Hamilton this weekend with matches at home.

Almy is excited to end the season on a strong note.

“I am looking forward to practicing hard, having fun, and keeping the positive momentum of the team going to finish strong as we head into the NESCACs and National tournaments coming up in May,” she said. “Hopefully we will bring home some more historic wins for Wes in these events.” 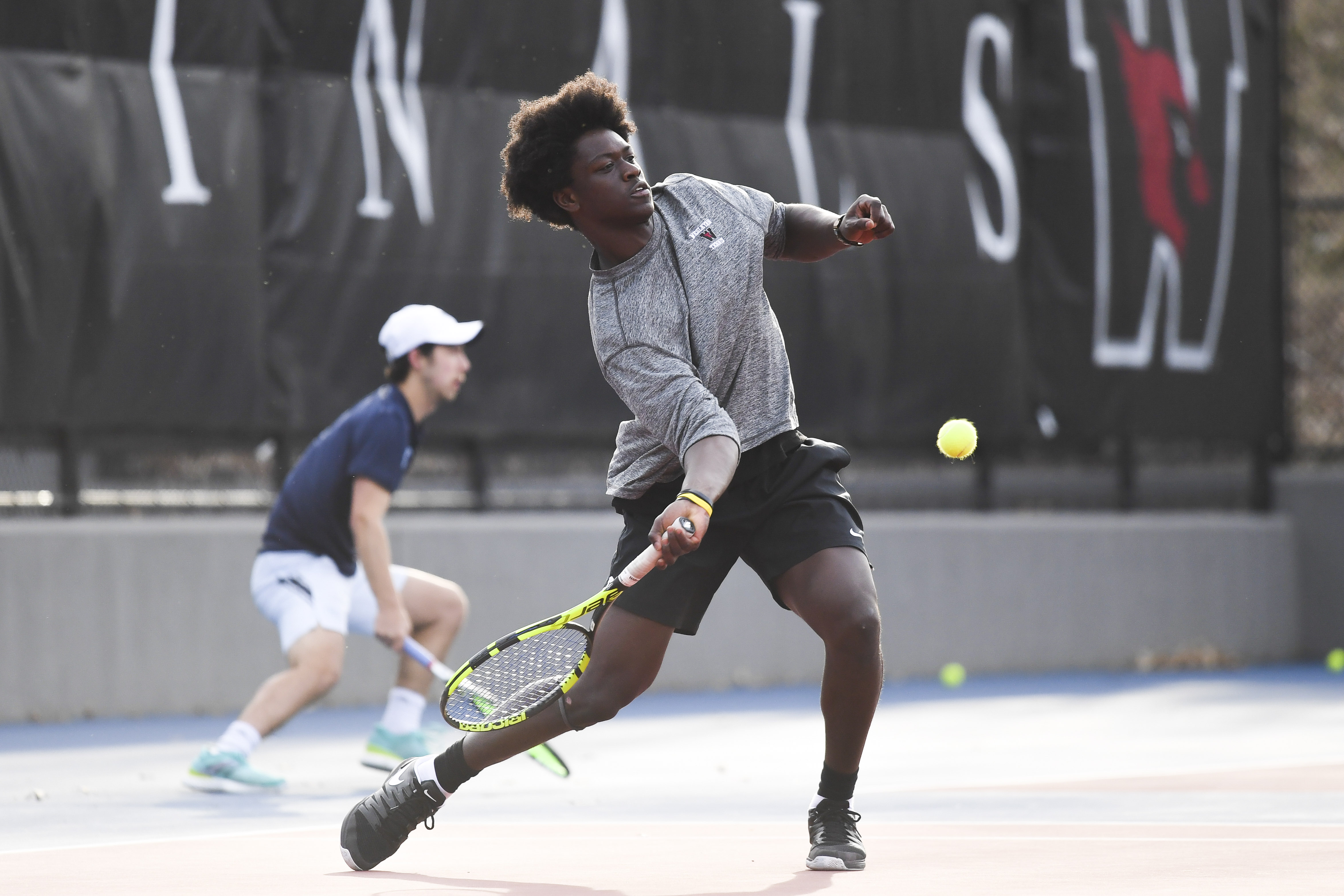 The fifth-ranked men’s team has also fared quite well. Coming off the heels of a brilliant upset of No. 2 Middlebury, the team faced No. 10 Williams on April 13. The Ephs managed to pull out a narrow 5-4 victory, but not without strong resistance from the Cardinals. Two newly assembled pairs of doubles teams managed to win their matches, an impressive feat for players who haven’t played together this season. The power duo of Princeton Carter ’20 and Jonathan Holtzman ’20 earned an 8-4 win, and the unbeatable matchup of Andrew Finkelman ’21 and Marcus Sweeney ’21 performed perfectly, not letting the Ephs steal a game and sealing an efficient 8-0 victory.

However, Williams had a stronger performance in its singles matches, winning at second, third, fourth, and sixth. In a three-set nailbiter that would ultimately decide the victory for Williams, Zach Lieb ’22 put up an impressive fight but at the end could not manage to top his opponent, falling 7-6(4), 3-6, 6-3.

The men had better luck against No. 7 Amherst on April 21. The previous week’s loss to Williams did not seem to hinder the Cardinals heading forward, as they came out ready to fire against the Mammoths. In what was perhaps their best performance of the season, the Red and Black managed to topple Amherst 6-1. In third doubles, Finkelman and and Sweeney won a crucial tiebreak after tying the match 7-7. This exciting victory set the tone for the singles matches and seemed to give the other players momentum. The match was called before fifth and sixth singles were played, yet Wesleyan took all four singles spots with ease. Highlights included Peter Anker ’22’s seamless 6-1, 6-1 win at second singles and Adrian Roji ’21’s match at third, where he rallied from being down a break in the first set and was able to clinch the victory in straight sets.

On April 24, the team continued to exhibit dominant play in a terrific performance against Trinity, winning the match 8-1. Wesleyan swept all three doubles matches decisively, refusing to let the Bantams win more than four games per match. In singles, the Cardinals dominated the top five singles matches. Highlights included Anker’s win at number one in a 6-2, 6-1 victory and a decisive match from Carter, who swept past his opponent 6-0, 6-3.

The men’s team has two more NESCAC matches left in their regular season. As with the women’s team, they are scheduled to face off against Colby and Hamilton this weekend, both at home in Middletown.