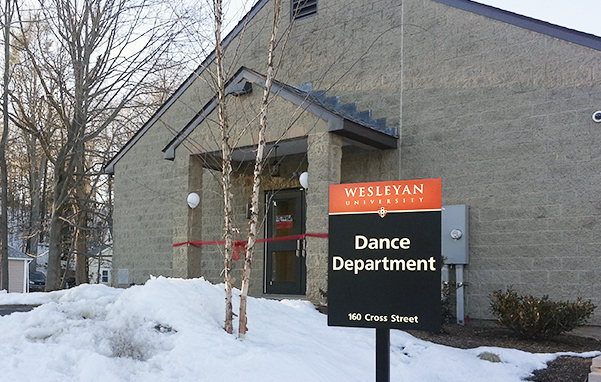 Beginning next semester, student groups will be able to reserve studio space at Cross Street Dance Studio and the Bessie Schönberg Dance Studio between 4 and 9 p.m. on Fridays. These studios will be open to students after they go through relevant training and sign a contract indicating that they will use the space respectfully.

A response to concerns voiced by student groups about the availability of rehearsal space, the new policy was instituted by Dean of the Arts and Humanities and Associate Professor of Dance Nicole Stanton, Chair of the Dance Department Katja Kolcio, and Dance Department Administrative Assistant Michele Olerud in consultation with Wesleyan Student Assembly Senator Adam Hickey ’22.

“Groups reported that it could be difficult to reserve space there if it wasn’t done well in advance,” Hickey wrote in an email to The Argus. “Dance and other groups were often in a sort of race to reserve the space, and groups that didn’t get enough time in appropriate rehearsal rooms were forced to make do with rooms less appropriate for performance rehearsals.”

To book the studios, student groups must submit an EMS request for use at least one week before they wish to use the studios. Groups may book a studio for a maximum of an hour and a half at a time to ensure that as many student groups as possible have the opportunity to use the space. In order for their request to be approved, groups must be trained on how to utilize the space and also sign a contract agreeing to take responsibility for the use of the space.

The trainings, led by the Dance Department in conjunction with Information Technology Services (ITS), will be 45 to 60 minutes, and two to three of these trainings will be held at the beginning of the fall semester. The trainings will cover which technology in the room is available for student use and how to use it, in addition to general rules, like which shoes can be used on which types of floors.

In the past, the technology in these studios and the studios themselves have been mistreated, so the trainings are meant to educate students about how best to use the studios to their advantage while caring for the spaces correctly.

“It has often happened that windows are left open overnight, people climb in through windows, parties happen in that space, the floors and technology are misused and damaged, and we just don’t have a budget for maintaining the spaces,” Kolcio said. “If we come in on Monday morning ready for class and it’s not in usable condition, the class suffers.”

In the future, the policy’s creators do not anticipate the studios being made available during hours beyond Friday from 4 to 9 p.m., given that the studios are meant to primarily serve dance majors and students in dance classes. However, Hickey lauded the Dance Department’s responsiveness to student needs in this new policy.

“I really have to emphasize the good work that the Department has done on this,” Hickey wrote. “I notified them that I had concerns over the availability of spaces on campus…and scheduled a meeting with Professor Kolcio, and I was presented with the first draft of the policy there. I can’t applaud their responsiveness and desire to help students enough!”

“It’s exciting that students are interested in being creative and active and using the spaces on campus available to them to make art,” Kolcio said.