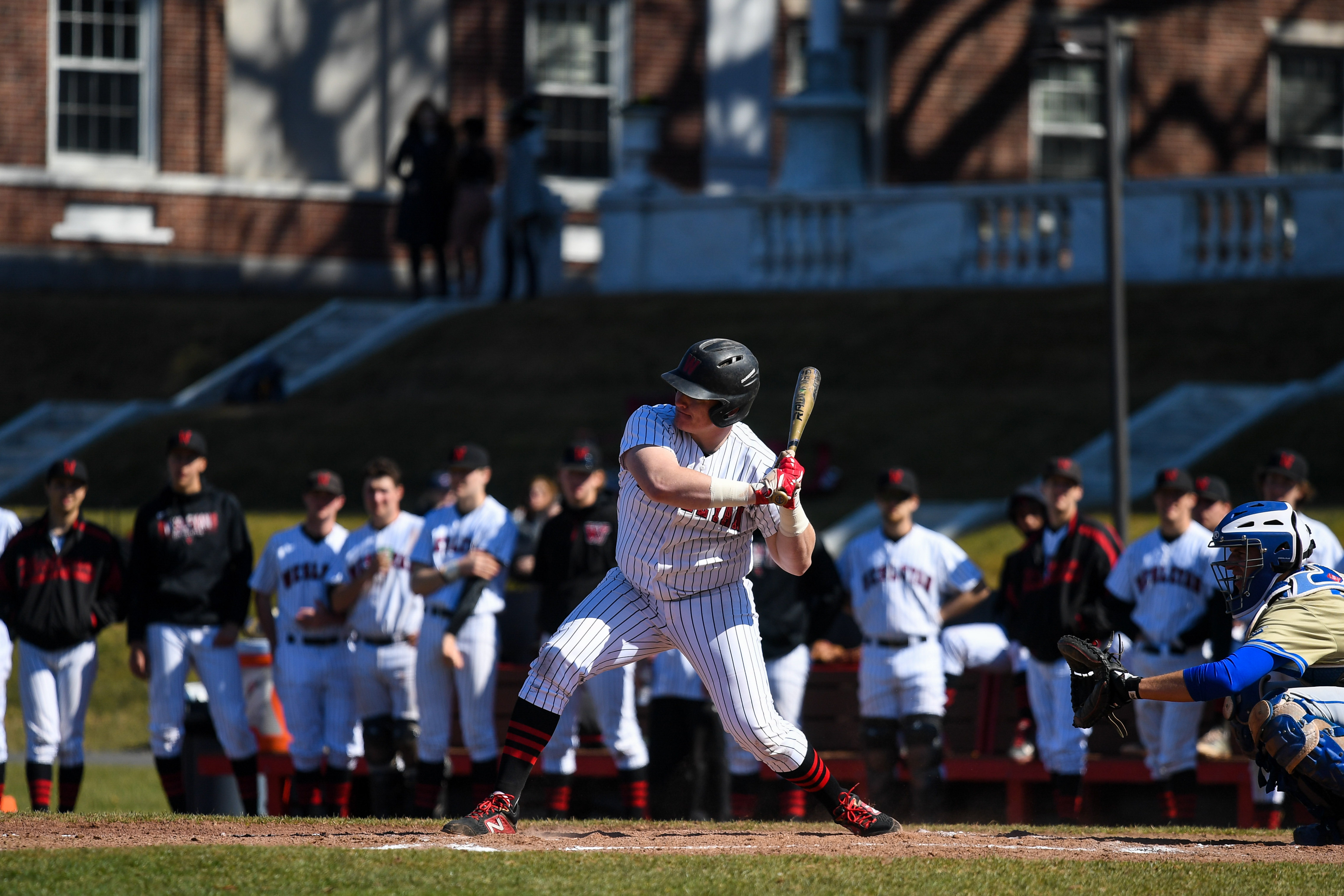 Since we last left our fearless Cardinals in early April, the team has tallied some exciting wins and rough losses. Going 2-2 since April 11, the Cardinals’ latest spell of games had them slated against the mighty Western New England University Golden Bears, who sport an 18-10 record so far this season.

This game was your classic pitchers’ duel with Wesleyan southpaw, Mike McCaffrey ’19, tossing a brilliant six innings, striking out four while conceding no earned runs. Following some tough middle relief from Everett Lee ’22 and Peter DeLalio ’19, our Cardinals turned it over to closer Jake Alonzo ’20 for the final one-and-a-third innings. Alonzo did not disappoint; he fanned three batters in his save to complete the 3-2 victory with the help of a fifth-inning RBI from Andrew Kauf  ’20, who provided the decisive RBI in Wes’ victory over the Golden Bears.

Next up for Wesleyan was a trip up north to face the Bates Bobcats in a doubleheader on Saturday, April 13. The first game was stolen from the Cardinals as they fell 4-2. The starter, Pat Clare ’19, tossed six innings with no earned runs, although four Bobcats crossed the plate while he was on the mound due to three Wesleyan errors. The Wesleyan offense was once again silenced. The biggest bright spot shined through in a three-for-three day from Danny Rose ’19; the slugger outfield is now hitting an impressive .372 for the season.

“My biggest adjustment this season has been my two-strike approach at the plate,” Rose said. “I finished the 2018 season with 20 strikeouts, so I made it my goal to cut that number in half this season. With the help of my coaches and diligent work in the batting cages, I have found myself more than comfortable in the batter’s box when the count reads two strikes, and thankfully, the results have been better than I expected.”

Our Cardinals entered the second game of the doubleheader with a chip on their collective shoulders, and unfortunately for the Bobcats, the Red and Black were not to be trifled with.

The Cardinals’ offense, which had been waiting for its moment to explode, erupted with a 10-3 pounding of Bates, posting 17 hits. Most telling was a six-run top of the ninth, which put the game to bed. Multi-hit performances littered the lineup, with three-hit games from Rose and second baseman Adam Geibel ’22, who also knocked in a pair of runs. The freshman is having an impressive campaign, hitting .300 in the two hole of the lineup. Centerfield leadoff hitter Andrew Keith ’19 also contributed with two hits and three RBI. On the mound, Kelvin Sosa ’21 tossed five-and-a-third innings, fighting through a five-walk performance by only conceding two runs. That performance moves his record to a solid 4-1 on the season.

As good as the Cardinals looked against conference rival Bates, they couldn’t maintain their momentum against Roger Williams University on April 16. The Cardinals lost 7-0, mustering just two hits throughout the game, while making five errors in the field. In the opposing dugout, Roger Williams pushed across seven runs on just five hits, something our Cardinals are not pleased about, as three runs crossed the plate unearned. Although he picked up the loss, Coleton Reitan ’22 has to be a bright spot for the Cardinals. He was able to strike out five in just three innings of work and now has 13 strikeouts in just nine-and-a-third innings pitched this season.

Moving forward, there are a few common takeaways from these four games. The first is that the Cardinals have the ability both on the mound and in the batter’s box to hang with any team in this league. The Birds’ pitchers have been electric recently, and the bats have the potential to be as well. The NESCAC is a tough league, and the Cardinals will need to play clean baseball in order to compete through the rest of the season, but with the talent on this team, they can definitely go far this year.

Up next on the schedule is two midweek games: Tuesday, April 22, against Wheaton College and Wednesday, April 23, against Coast Guard Academy. But this all is just the build up to a massive three-game set against Middlebury on the weekend of April 26. This will be a “prove it” series for our Cardinals this season, and they seem ready for the challenge.