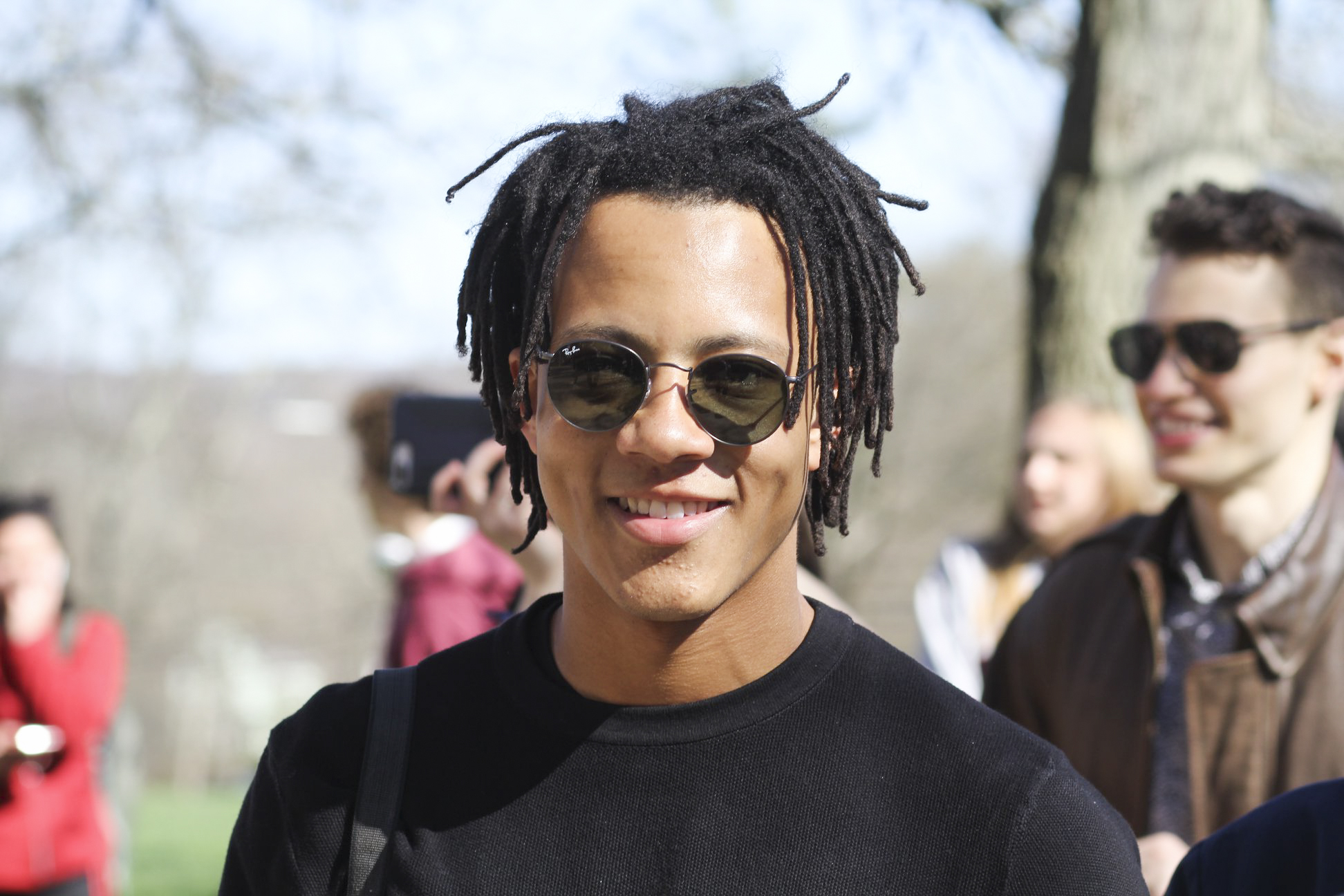 You’ve probably seen him at the ’Swings counter, or at a Tiny Shed concert. Or maybe you’ve seen him at Psi U. But do we really know psychology major and film minor Ellis Richmond ’19? The Argus sat down with Richmond to talk about his time at ’Swings, his experiences managing senior ko-op, and his radio show Al’s Bum Review.

The Argus: Why do you think you were picked as a WesCeleb?

Ellis Richmond: I feel like I try to meet as many people as possible here, and I work way too many shifts at ’Swings. I also live next to Sam [Prescott ’19] and Will [Halliday ’19], so that must’ve been part of it. [laughs]

ER: It’s a great job. A little exhausting, but Ed [Thorndike ’89] and Karen [Kaffen-Polascik]—the owners—are the best people in the world. You get to see so many people at the register. I work at the register, so I literally see every face that walks in there. It’s been really fun to have micro-interactions with people I would never even see on campus.

A: Have you worked there since freshman year?

A: Is there a community of people that become really close working at ’Swings?

A: What’s your major?

ER: I’m a psychology major and a film minor.

ER: It’s been fun. I came in here thinking that I was going to be a psychology and econ double major, and do like, marketing after, and quickly realized that I just could not do econ. That just was not something that was up my alley. So then sophomore year…yeah, sophomore year sounds right. I took one film class. And realized that I really, really like this, but I was a little too late to become a major. So I joined the minor, and I think between the two of those things, psychology and film, it’s been really eye-opening. I think I’ve learned a lot about how people work, t…. I think the combination of the two has been really helpful, and really helpful for things like internships and stuff like that.

A: Where have you worked?

A: Do you know what you’re doing next year?

ER: Oh, no. Still figuring it out.

A: And you’re a part of Psi U, what’s that experience been like for you?

ER: It’s been a crazy ride. I think the craziest part for me—the most interesting part—has been just the changes that have happened over the past three years I’ve been there. We didn’t have the house before I started, and the first co-ed pledge class was the one two before mine, so there’s just a different mentality about what that space is used for, what it’s supposed to be, and who should be there. I think just every year we get these people that have new ideas for it, and it kinda changes the whole place. But at this point, I’m kind of out, so it’s just like me trying to watch from the outside instead of trying to actually make a real impression.

A: Have you enjoyed it?

ER: Oh, I’ve loved it. I think that was one of the reasons I met a lot of the people that I know on campus. Just like, people that were from totally different corners of campus that I would meet, and then I would meet their friends, and it just kind of built on itself.

A: Do you think the pledge classes have changed since you started?

ER: I think that Wesleyan has changed, and that it’s very visible through Psi U as a microcosm of Wesleyan.

A: And you run senior ko-op, right?

ER: It makes my Thursdays pretty hectic. [laughs] Basically it’s just a lot of organizing, a lot of talking to seniors. It’s senior-run, and it’s made for seniors to basically have people from every part of campus come together every Thursday, and just kind of enjoy themselves and start the weekend off right.

A: Oh, and you’re also a part of Tiny Shed, right?

ER: Yeah, so that started I wanna say right in the fall of this year. It was kind of a crazy idea Jordan [White] and a few other people had to just kind of have a concert every week, just combine film and music and kind of showcase all the talent we have on campus because I think there’s so many different types of musicians out here who do so many different things. So I film there, and I produce a little bit. Megan West [’19] does all the editing. And it’s just a really fun opportunity to kind of see all these different people perform some of the best music I’ve ever seen in person. And we really utilize the shed that’s in the back of the Fountain. That’s kind of the center of it.

A: Have there been shows that have been particularly awesome?

ER: Yeah, for Isaac Gotterer [’19]’s thesis, they had a preview that they did for us, and that was really theatrical and really fun. I think that was the first one where we got all of our techniques and how we wanted to stylize it down. And it just looks pretty, in my mind. It’s one of the best ones we’ve ever done.

ER: I mean, I’ve definitely seen myself grow. I came in here very, very shy, and very introverted. And I don’t think that that’s completely changed, but I think through a lot of the people I’ve been able to meet around here, I’ve really come out of my shell in a way that I wouldn’t have if I didn’t have all this support. I think at this point in my career, I’m involved in enough things that I feel kind of overwhelmed all the time. I have a radio show too, with my housemate Jake Margolis [’19].

A: Oh, what’s your radio show about?

ER: It’s an album review show, it’s called Al’s Bum Reviews. It meets every other Tuesday from 12 to 1, and we just review an album and kind of go through a whole album, and just go through some of the artist’s interests and contemporaries and collaborators.

A: When did that start?

ER: That started junior year, as well. So I think that’s the thing. I really feel like I wasn’t involved enough freshman and sophomore year, and then something changed.

A: What was one of your best shows?

ER: The first one we did was Mac Miller’s Swimming. It’s honestly kind of sad, it was right when he died, and that one made me realize how much his music really meant to me. We did one on Stevie Wonder, Music on My Mind, that was really really one of my favorites and one that just allowed me to study one of the musicians that I grew up on. My mom is a huge fan of Stevie Wonder, so I’ve always had his music around. That was kind of one of my favorite ones, easily. I heard that album for the first time a couple of months before I did the show, so it was really fun to do a kind of deep dive past a surface level understanding of the music.

A: Has there been any particular experience at Wesleyan that really encapsulates your time here in some way?

ER: I don’t know if there’s one experience that has really done it for me. I think it’s a type of experience. Those moments when, like, just the most random people all come together on campus and are all doing the same thing and just enjoying themselves, and not caring about like, the politics or whatever of being on this campus. A lot of the darties this year have been beautiful spaces where everyone is really just there, and enjoying themselves. I think the SOC fashion show was an amazing experience for me at least. I just met so many people that I really should’ve known for a long time. And the senior semi-formal was really really fun, just because of the same idea of everybody celebrating the same thing and coming together and doing something with a purpose.

A: What advice would you give your freshman self?

ER: What would I say to that kid? I would say…. I was very intimidated by, like, personality when I first came here. Because the school was so small I guess, some of these people who were just kind of big faces on campus. Like bigger than life. And I guess I would say to my freshman year self, like, if you put everyone on an even playing field and just try to interact with as many people as possible, you’re going to meet some amazing people. And just like, don’t be afraid to be the person to talk to somebody, or to start a conversation.