Fourth Week of Art Theses Plays With Genre and Medium 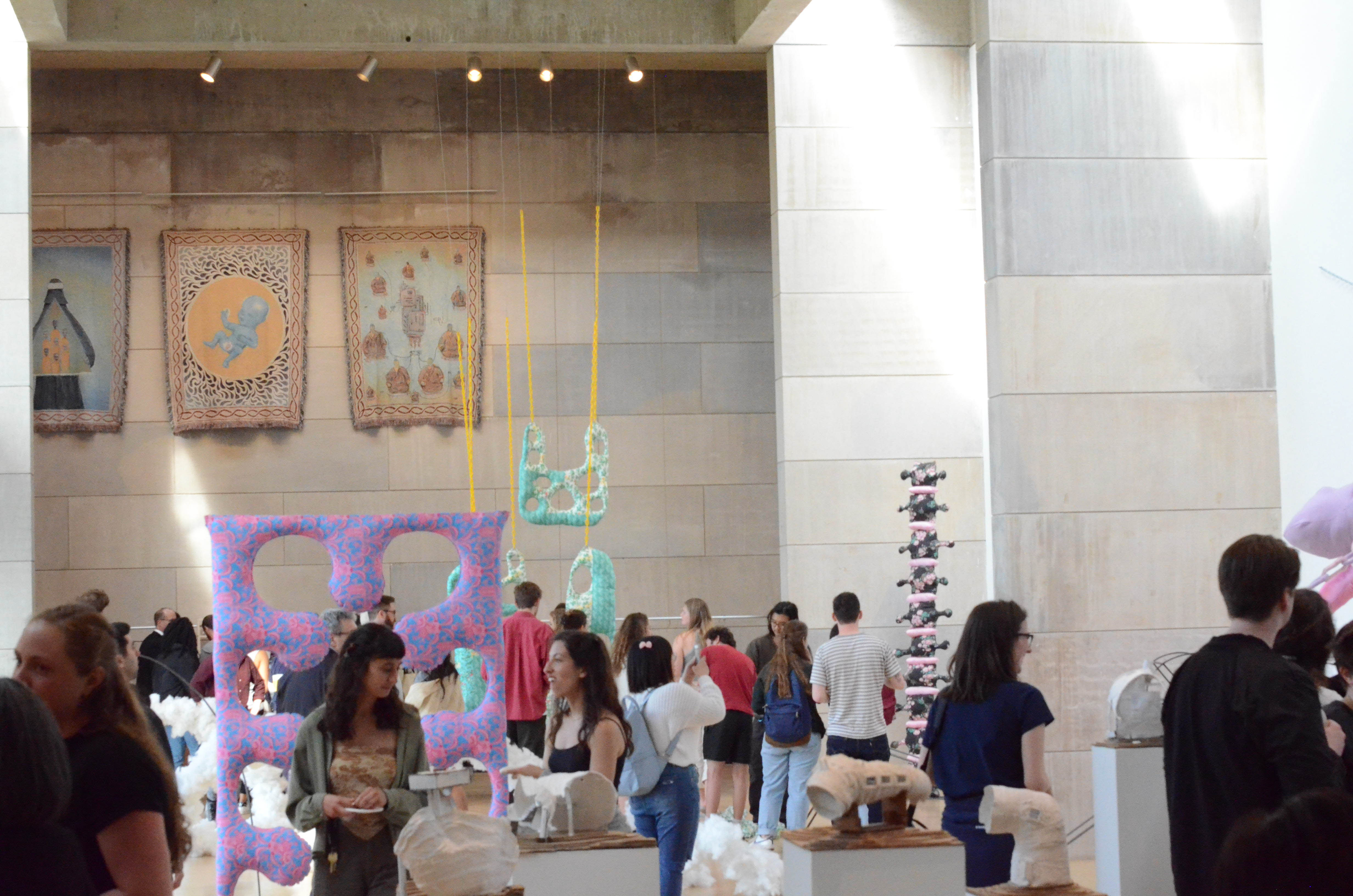 This past Tuesday, the penultimate set of art thesis exhibitions went up in the University’s Zilkha Gallery. The exhibitions, which feature work by seniors James Gibbel, Matthew Gilbert, Phuong Le, Jaime Kahng Wiesner, and Adis Halilovic, explored a variety of topics from memory to technology to mental health.

Gibbel’s thesis, “DEAR SUSAN,” is a fully immersive project, spatially and cerebrally, that incorporates multimedia and sculpture to discuss a broad array of themes from technology and capitalism to the intimate self.

“My thesis process began with the notion of exploring the body and technology,” Gibbel said. “It grew into thinking about the body in relation to the screen, but took a departure as I began to explore sight and facingness, and how their mediation has changed due to the development of visual technologies.”

The work weaves together seven different pieces along with a virtual reality component, central to the work, that each function independently while also building off one another in an overarching narrative.

“I’m very interested in the way capitalism makes things ‘dumb,’ by which I mean accessible for consumers to be producers, yet only in narrowly defined spaces,” Gibbel said “VR is a dumb technology, and therefore interests me. It is also, at this moment, the most accessible example of the changes visual technologies are making in consideration of facingness, embodiment, and digital space.”

The thesis, influenced by Hito Steyerl and Jacolby Satterwhite, centers around a conversation between Gibbel and a virtual character as they discuss an array of existential topics.

“Susan is a fictive artificial intelligence, an imaginary friend,” Gibbel said. “I speak to her because I have trouble considering an audience of human peers. She is a tool for sharing with others what I can only share with myself.”

Gilbert’s thesis, “a royal rumpus,” takes a different approach to sculpture, primarily investigating the essences of selected materials which the ideas in the work are then derived from. 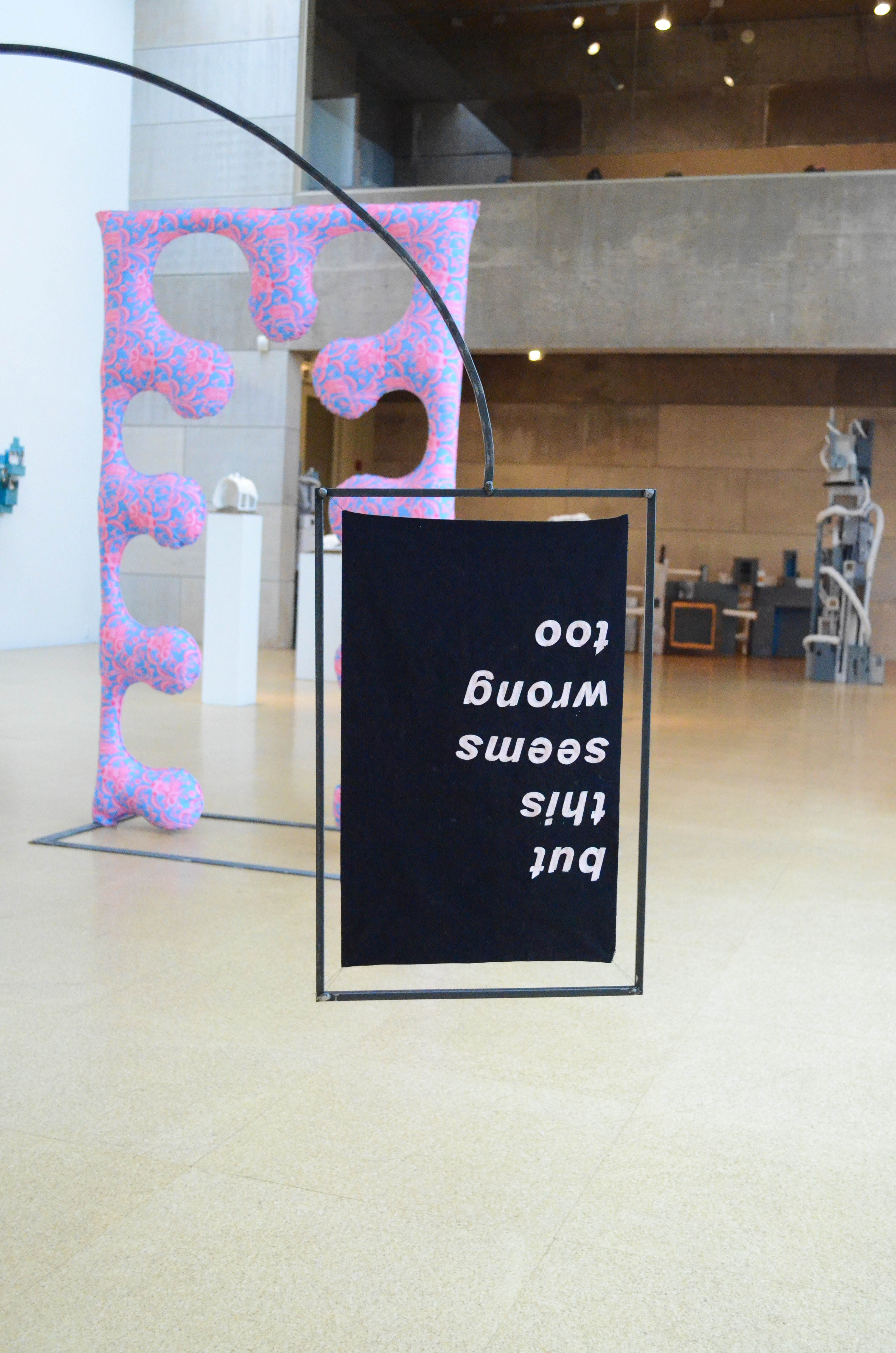 “I actually decided my materials before my concept,” Gilbert said. “I knew I wanted to work with fabric and stuffing to create soft malleable and touchable looking work and I also wanted to use the hard black industrial steel. I was interested in these materials because although they seem like opposites, I found myself really interested in their similarities, namely their flexibility and response to weight and different pressures. Working with the materials I discovered the ways in which they could support and affect the opposite and also learned what they had in common.”

While the range of unorthodox materials (steel, fabric, and pillow stuffing) in the different pieces initially captivates the viewer, there are subtle yet complex themes imbued within the relations between the materials and their implied connotations.

“I wanted to play with the power relationships between the materials and explore how one could overpower the other, but I wanted to present them as equally powerful and I didn’t want to be critical of the materials,” Gilbert said. “I was interested in exploring how a power imbalance could be beneficial to both materials and didn’t want to determine one material as superior to the other, but rather demonstrate how they could work together.”

Le’s thesis, “I used to think it was my rememory,” reflects the fluidity of memory and the ways in which memories can impact us. 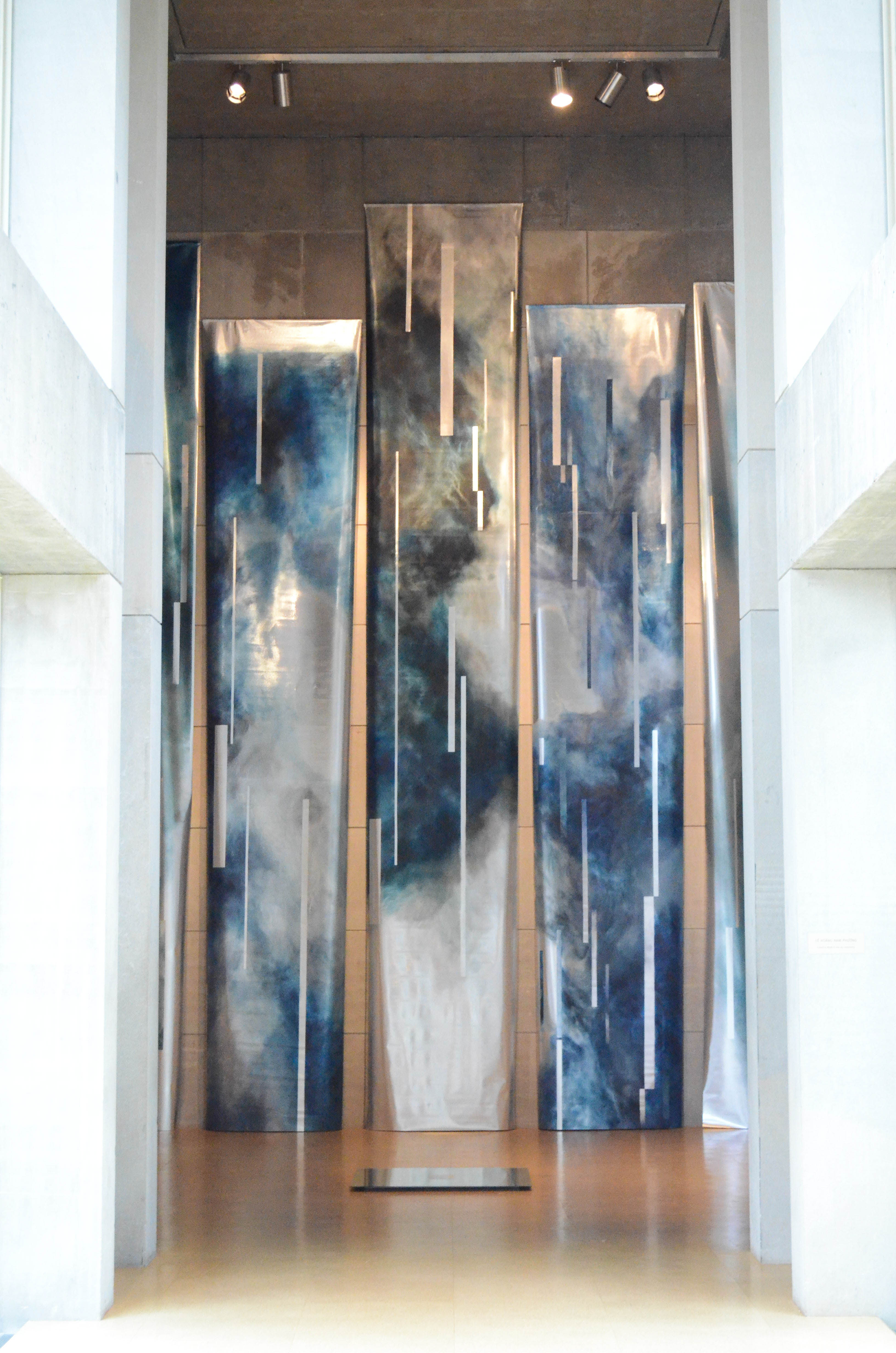 “This project is a meditation on the slippery nature of memory, in particular inherited memories that shape the individual despite having never been experienced firsthand,” Le told The Argus. “I began the work upon uncovering a painful secret about my family’s history and coming to terms with my relationship to this trans-generational trauma.”

In the middle of the installation, a mirror lies flat on the floor, reflecting the ceiling. An aged-looking note written in cramped Vietnamese script sits on top of the mirror. Small oil paintings in muted colors depicting zoomed-in versions of various objects—a flower, a pile of rice—are hung on three of the four walls surrounding the mirror. On the fourth wall, directly behind the mirror, hangs a row of long, narrow tapestries covered in abstract streaks of color.

“With an installation comprised of oil paintings on multiple scales, I was interested in creating a quiet environment that reflects the experience of working to gain ownership of and control over one’s past,” Le explained.

Weisner’s thesis, “Splice Graft Tangle Nest,” consists of a series of prints and sculptures constructed out of unconventional materials like cardboard. 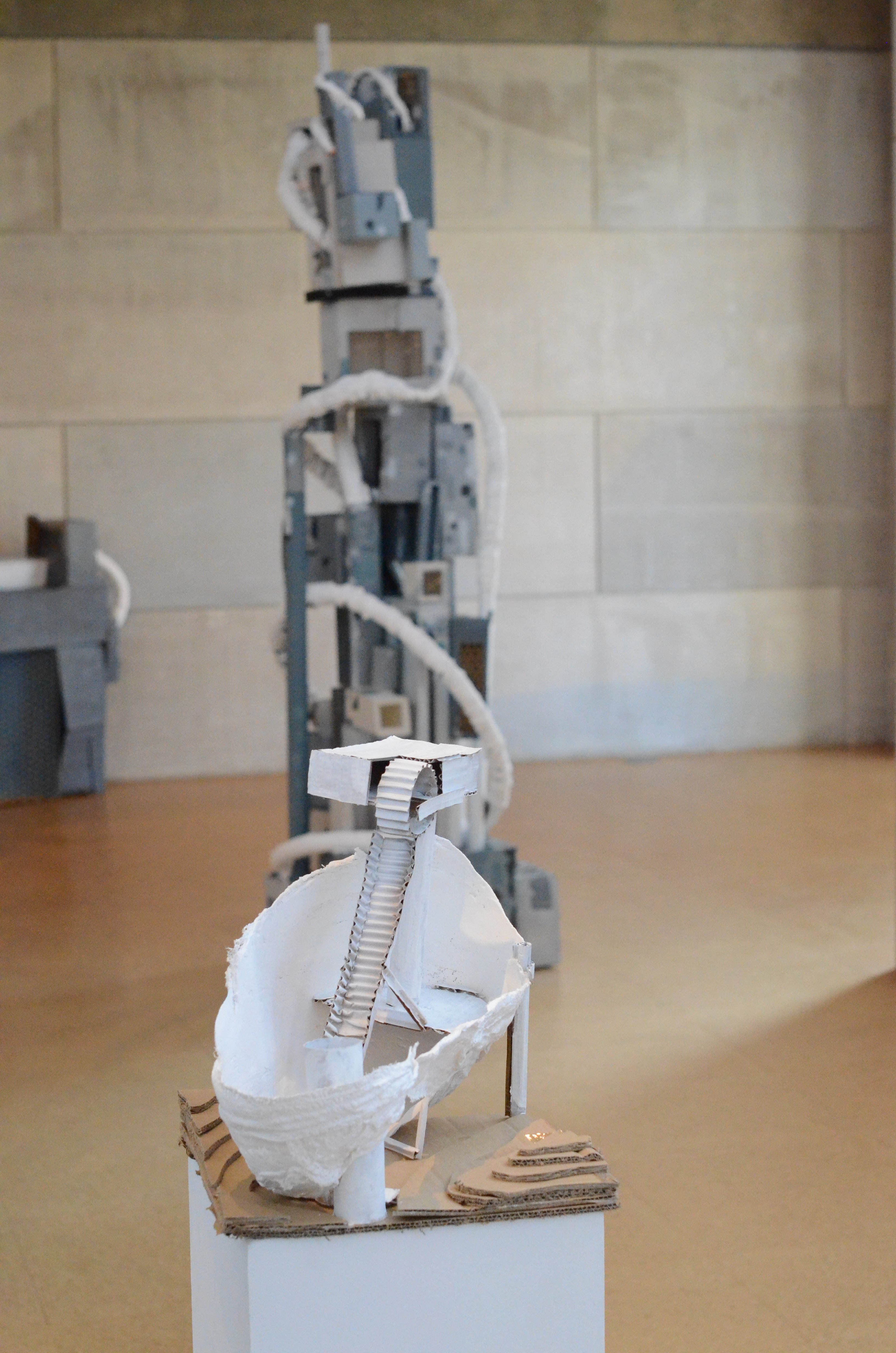 “I knew I was interested in disposable materials and building a kind of environment, and then it just unfolded from there,” Weisner said.

Upon entering the gallery space, viewers are immediately confronted with a cluster of Weisner’s sculptures, which consist of elaborately stacked and layered cardboard boxes, some of which are connected by tangles of pipes. These sculptures are both familiar and surreal, resembling funhouse mirror reflections of a piece of machinery or a cityscape. These visual patterns are echoed in other parts of the installation, such as a row of colorful, overlapping prints depicting geometric forms that vaguely resemble simplified buildings, or a multilayered group of teal-painted cardboard rectangles and organic plaster forms mounted on the wall.

“Both my advisors are really process oriented, so over the summer and during the first semester of this year there was a really big emphasis on just experimenting with materials and trying out ideas…” Weisner said. “The project evolved out of a pre-existing interest in containment and world-building. Specifically I was looking at these steel barriers on the side of train tracks over the summer and was really interested in the ways that they look like they’re made up of cubby-spaces.”

Halilovic’s thesis, “I Will Not Fear,” consists of a series of semi-abstract paintings which reflect the artist’s struggles with feelings of depression and fear. The paintings are diverse in style and content—one piece consists of a mosaic-like pattern of brightly colored geometric shapes, while another is painted with a spiderwebbed pattern of white lines to resemble a cracked piece of glass—but all draw viewers’ attention with their vivid colors and graphic patterns. 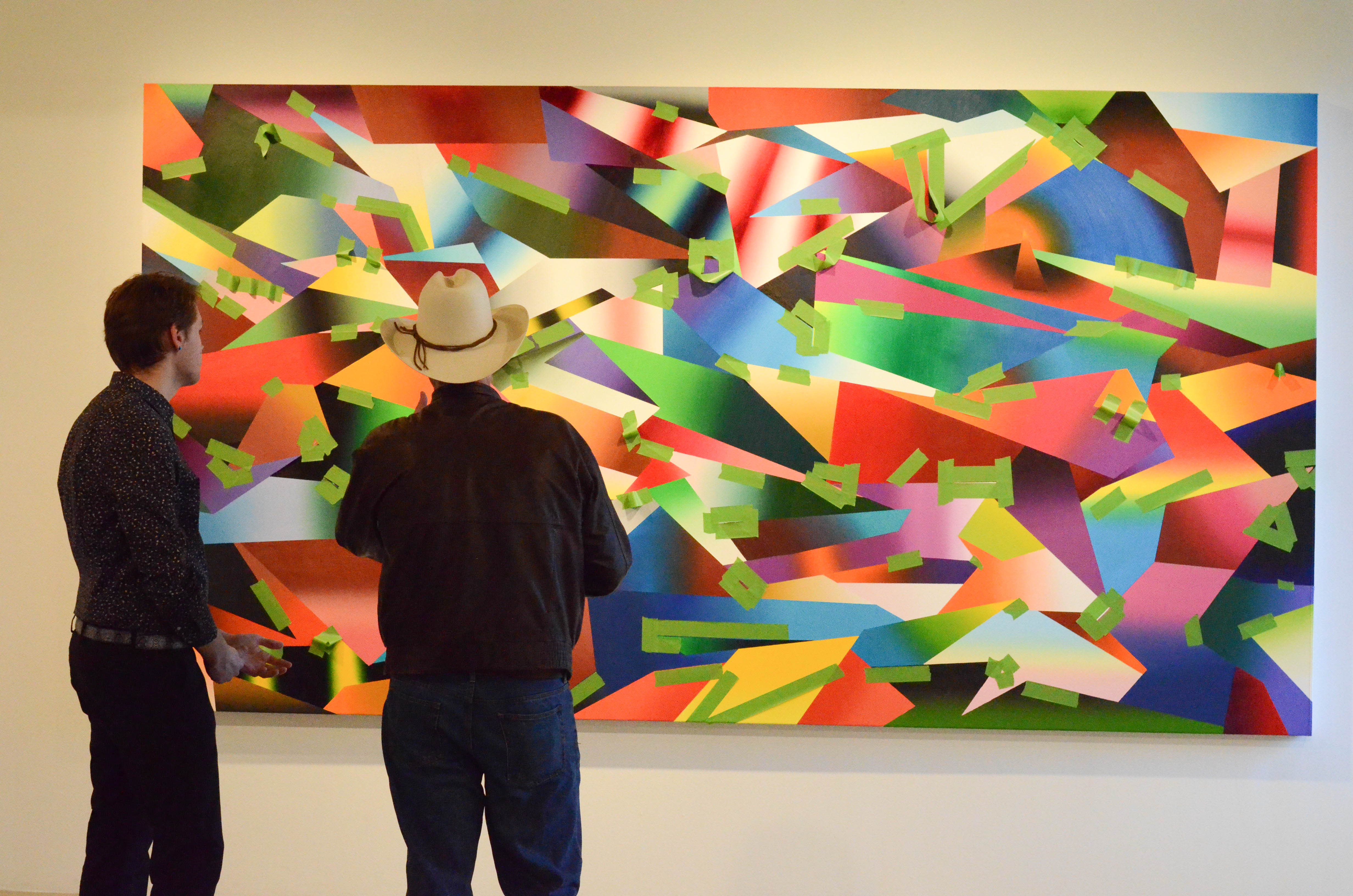 “I had been making art based on mental health issues since I began painting, however [it] always had a darker undertone, even with some use of color,” Halilovic said, explaining the inspiration behind the paintings. “The summer before my thesis began, I knew I wanted to create super colorful paintings that were highly emotional in concept but eye-catching in appearance, so that the concepts I was trying to convey wouldn’t make people want to look away.”

Halilovic’s artworks also have a variety of objects—such as tape, bubblegum, or balloons—attached to them, adding an unexpected touch and bending the boundaries of the medium of painting.

“Once I finished the paintings, I needed to elevate them with mixed media elements to add humor to the works and give each piece their own personality,” Halilovic said. “Each sculptural element added to the paintings is meant to both make fun of my own fears while adding more dimension to the paintings to give the audience more to think about.”