Second Weekend of Music Theses Experiment With Genre and Space 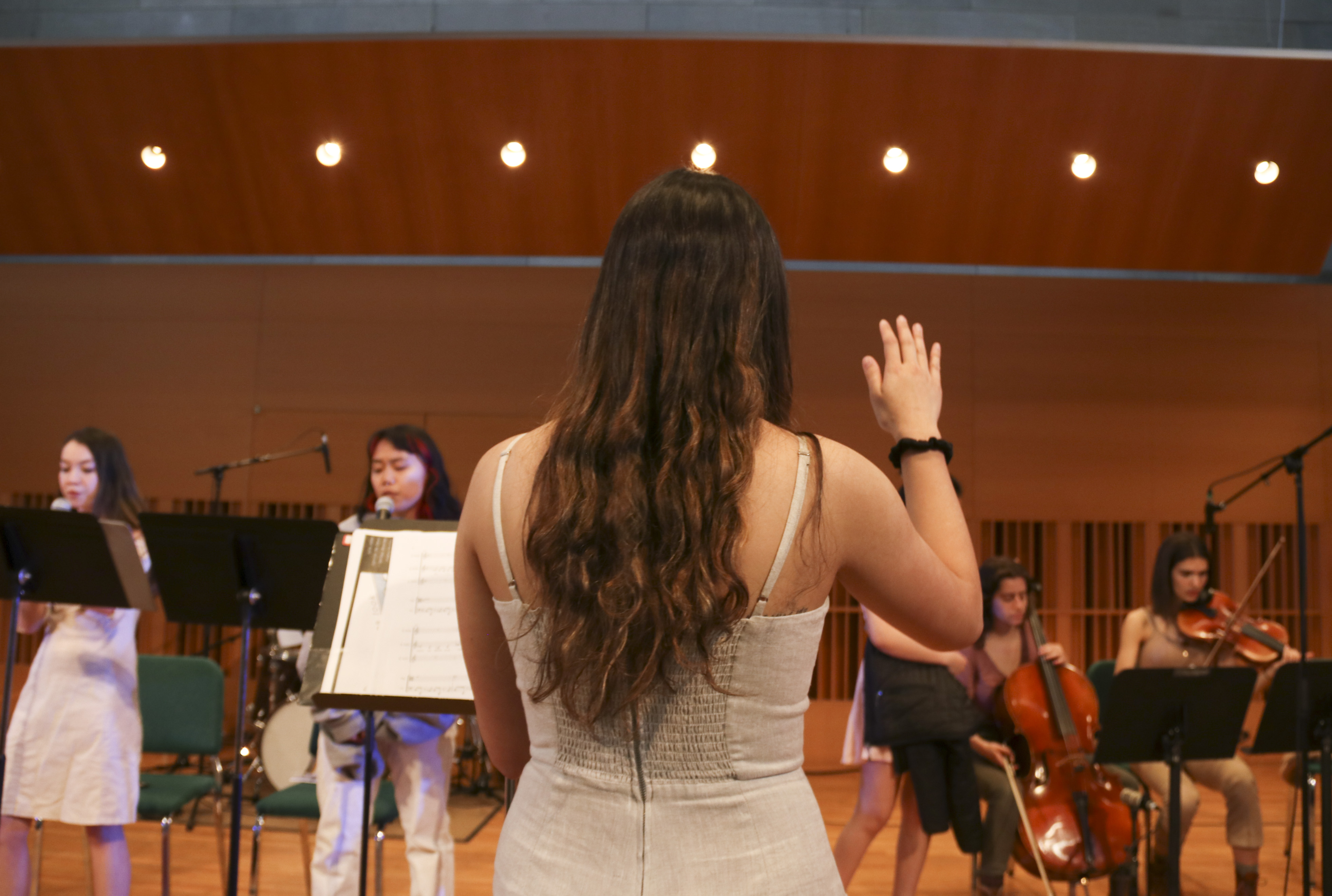 This past weekend saw thesis recitals by seniors Camille De Beus, Isaac Price-Slade, and Daphne Gampel go up across campus.

De Beus’ thesis, “pearls the sea took,” was “a performance of a suite of music about feelings, experiences, and stories of those who identify as womxn of color.” The concert included several pieces that De Beus composed, as well as spoken-word performances, with improvisation set underneath. The songs were performed by five vocalists—Ayana Dudley ’20, Maxine Go ’20, Alexandra Prendergast ’20, Sam Rizon ’20, and Jolie Villegas ’22—and ranged from choral-like pieces with complicated harmonic structures to more upbeat, jazzy numbers.

“I took a music major seminar with my advisor Tyshawn Sorey in the fall my junior year on creative music from the 1960s and onwards, and there were some topics that were really interesting to me.” De Beus said of her thesis’s inspiration. “In particular I thought that it was interesting how genre was treated, and how we characterize genre and the historical impact of all of that, and then I think also I knew I wanted to write a thesis and why genre matters, and why it doesn’t. And as someone who identifies as a woman of color, I wanted it to be a composition that was relevant to my life. I think a lot about how genre interacts with race and gender. Like if you’re on Spotify and you see someone characterized as a singer-songwriter, they’re more likely to be a woman, or black women are often more likely to be described as being a jazz singer. And I know that part of that is related to the market, and so I was interested in looking into that for part of the thesis.”

Throughout the performance, the songs had melodies that were both catchy and musically nuanced, bringing to mind the smooth landscapes and strong vocals of Overcoats or boygenius; or else maybe the warm, rhythmic tones of Billie Holiday or Joni Mitchell. Lyrically, the songs delved into issues ranging from whitewashing to inherited trauma to complicated or toxic relationships. A particular standout was “Howl at the Moon,” with Rizon starting off by lending incredible warmth to the solo, and the other vocalists slowly joining in, adding texture to a song that was intimate and utterly original. The spoken word pieces, written and performed by Naomi Williams ’19, Annie Ning ’20, and Annabella Machnizh ’22 provided a great counterpoint to the more atmospheric songs, with De Beus and Dontay Downer ’19 playing piano and drums, respectively, in the background.

“I think I hadn’t ever had so many of my compositions performed in a more formal manner with such a long process, so having to go through the process of composing and thinking about all that in such an intense manner was really cool,” De Beus said. “I also had to teach it to everyone, so that was a good learning experience on music directing, and in composing I also had to think more about the logistics of how everything comes together.” 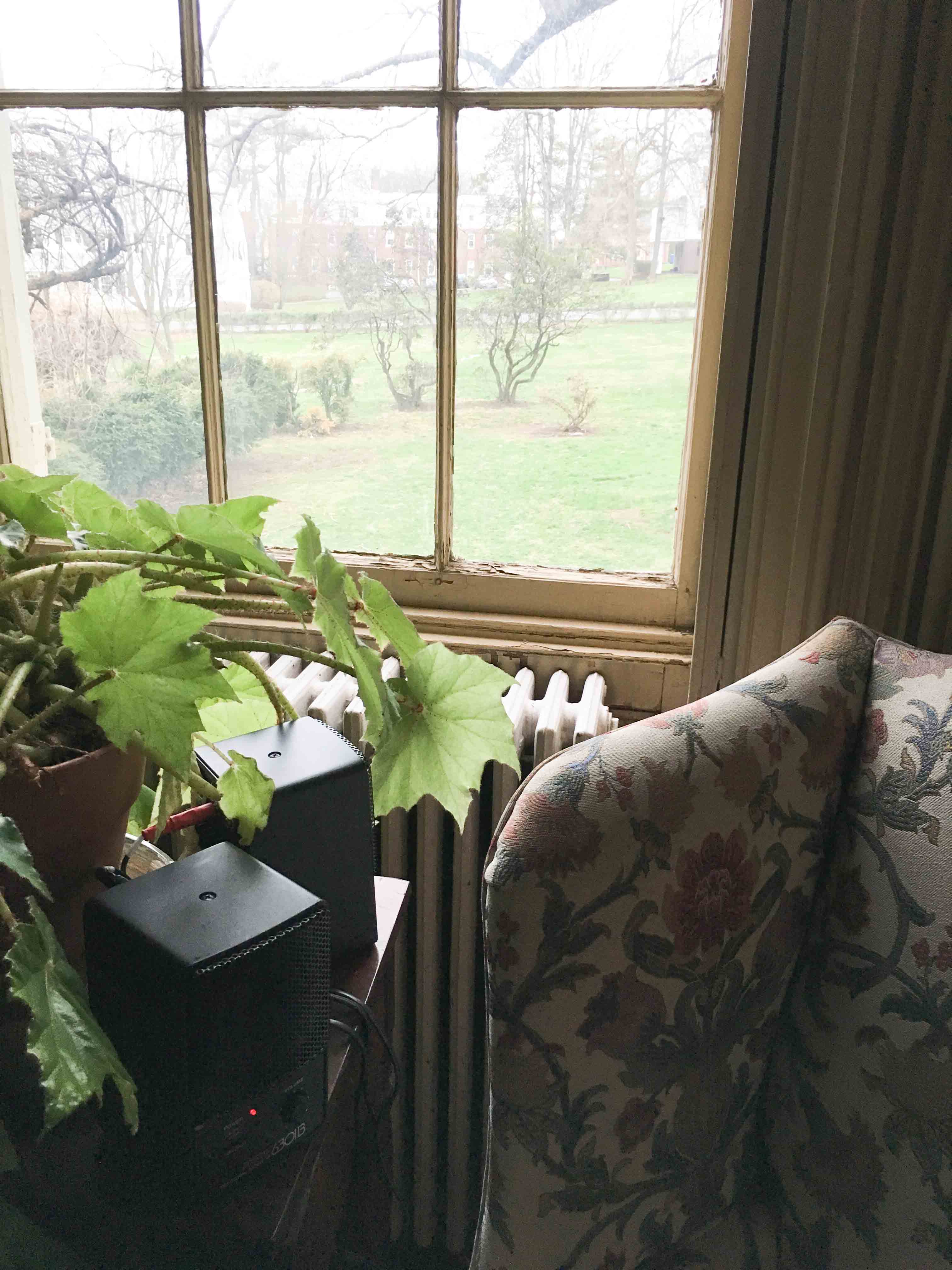 This past Sunday at Russell House, Price-Slade played his senior music thesis over the course of six hours, engaging audiences in an installation sound piece.

For the thesis, Price-Slade installed speakers in three different rooms in Russell House that used different sound compositions, ranging from radio to found sound artifacts, to interact with the interior environments of the rooms. Hooked up to a central computer monitor that Price-Slade programmed beforehand, the work altered the sound output based on variables dependent on the viewers interaction with the environment in Russell House. Intermittently, Price-Slade would alter the algorithm that controlled the monitor.

One of the features of the installation included a singing computer, which Price-Slade had programmed to perform randomized compositions.

“I favored compositions with certain cadences, so they would sound less arbitrary, like they have a resolution to them. I also tried to record the sounds of footsteps in the space, but the editing would have been too complicated, so I ended up abandoning it,” Price-Slade said.

As a student in experimental music, Price-Slade organized the piece to investigate the role of chance, a popular theme in works of experimental music, such as John Cage’s music of changes, as well as the relationship between sound and space, as famously explored by Alvin Lucier.

Gampel’s thesis, “Above the Noise,” took the form of an oratorio, a type of large-scale musical work consisting of narrative songs which generally center around some type of sacred subject. “Above the Noise” is a contemporary update of the traditional oratorio (which originated in the 1600s), addressing themes of religion and identity on the modern college campus. The piece was informed by interviews she and Ramsay Burgess ’20 conducted with over 60 Wesleyan students about their religious identities and experiences with faith on campus. While these interviews were only conducted over the course of the past academic year, the idea for the thesis came to Gampel much earlier than that.

“I actually came up with the concept for the project in the first couple weeks I was at Wesleyan,” Gampel told The Argus. “I was excited about intellectualizing anything and everything—in true freshman form—and a lot of these discussions I was having with classmates related to religion in some way or another. I had also only written songs at the time, never a longer body of work, so I knew I wanted to challenge myself to write a series of pieces on the same theme.”

“Above the Noise” consists of both songs (written by Gampel but inspired by the content of the interviews) and spoken word interludes (which consisted of direct quotes from the interviews).

“Ramsay and I transcribed all of the interviews we took for any quotes, sentiments, or stories we liked and had it all on a huge shared drive,” Gampel said, explaining the steps she took to turn the raw interviews into a complete performance. “We created a vague template/outline that included different moments from different interviews and from there it was a pretty fluid process of me writing music to fit in that outline or writing something new and adjusting the outline. Originally I didn’t want to include any dialogue (because most contemporary oratorio don’t feature much dialogue), but it started to become obvious that the narratives presented through the music alone might not communicate everything that I wanted to, so Ramsay and I went back to the doc and started picking quotes we thought rounded out each narrative.”

The narratives in “Above the Noise” express a vast array of backgrounds and perspectives. One song describes how a student’s relationship with God helped her through a mental health crisis, while another describes a student’s growing alienation from religion in the wake of her mother’s death. The diversity of these stories—which, alongside religion, tackle topics like family, community, sexuality, and cultural background—mirrors the diversity of Wesleyan students’ experiences, which was Gampel’s ultimate goal.

“I sought to reflect these varied perspectives through music with many voices,” Gampel wrote in a composer’s note for her thesis. “Through these distinct narratives, I hope to represent what I have found sacred on this campus—awareness of and comfort with our interconnected differences.”