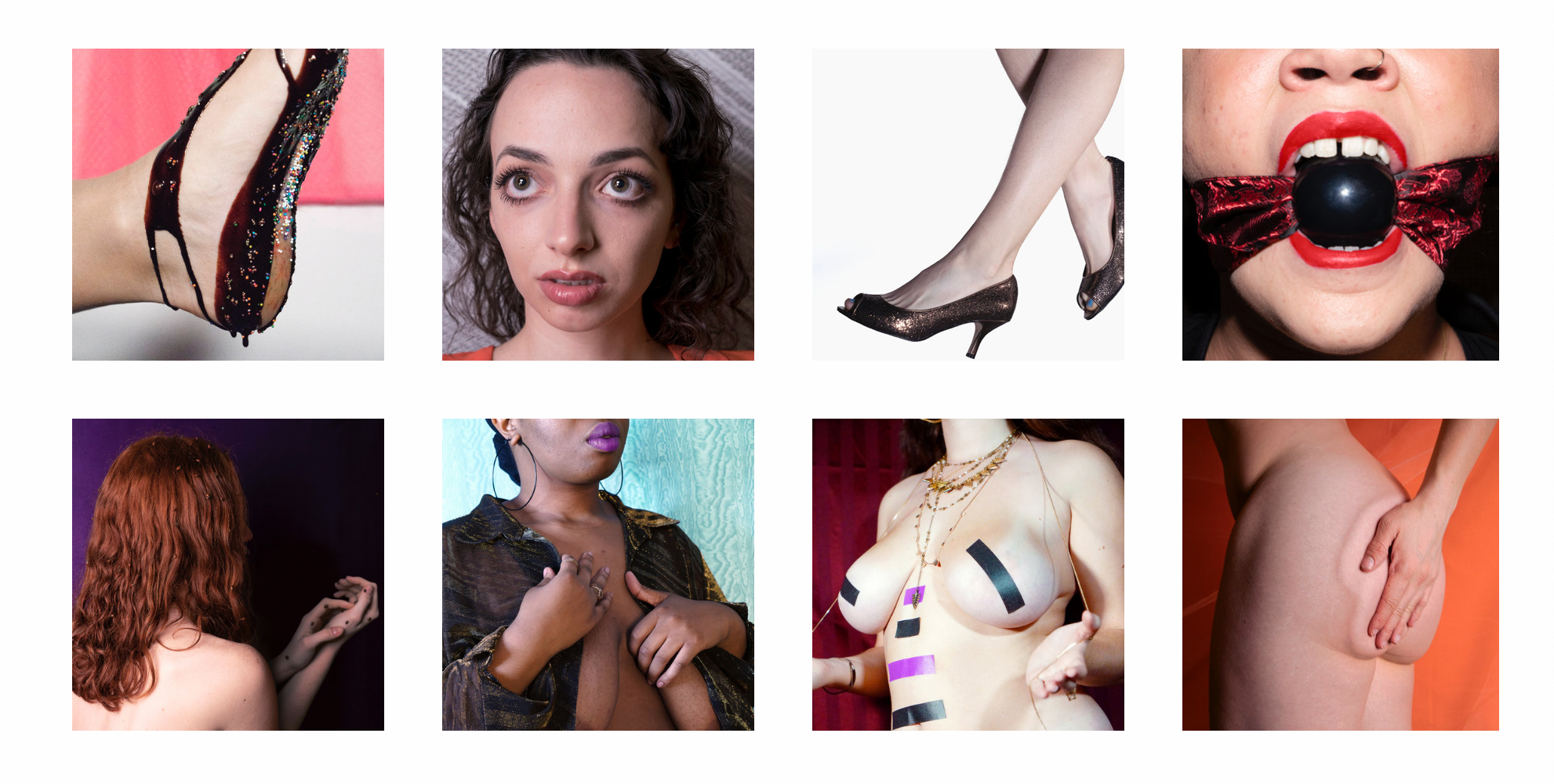 This past Tuesday, the third set of senior art theses opened at Zilkha Gallery, with a reception on Wednesday evening for the artists to present their works. Seniors Emma Cantor, Olivia Gorman, Ona Lepeska-True, Toby Meyer, Dominique Nunnally, and Madeleine Sargent exhibited their works, which showcased a variety of mediums, themes, and artistic influences. If last week’s senior theses were marked by their conceptual overlaps, this week’s works were defined by their distinctly different and individual subject matter.

“A focus within my work is imploring the viewer to come closer to to themes of sex, sexuality, and fetish,” Sargent said. “I hoped to create a visual conversation with the viewer as they approach the work and discover some of the minute details within the photos, perhaps changing their initial perceptions.” 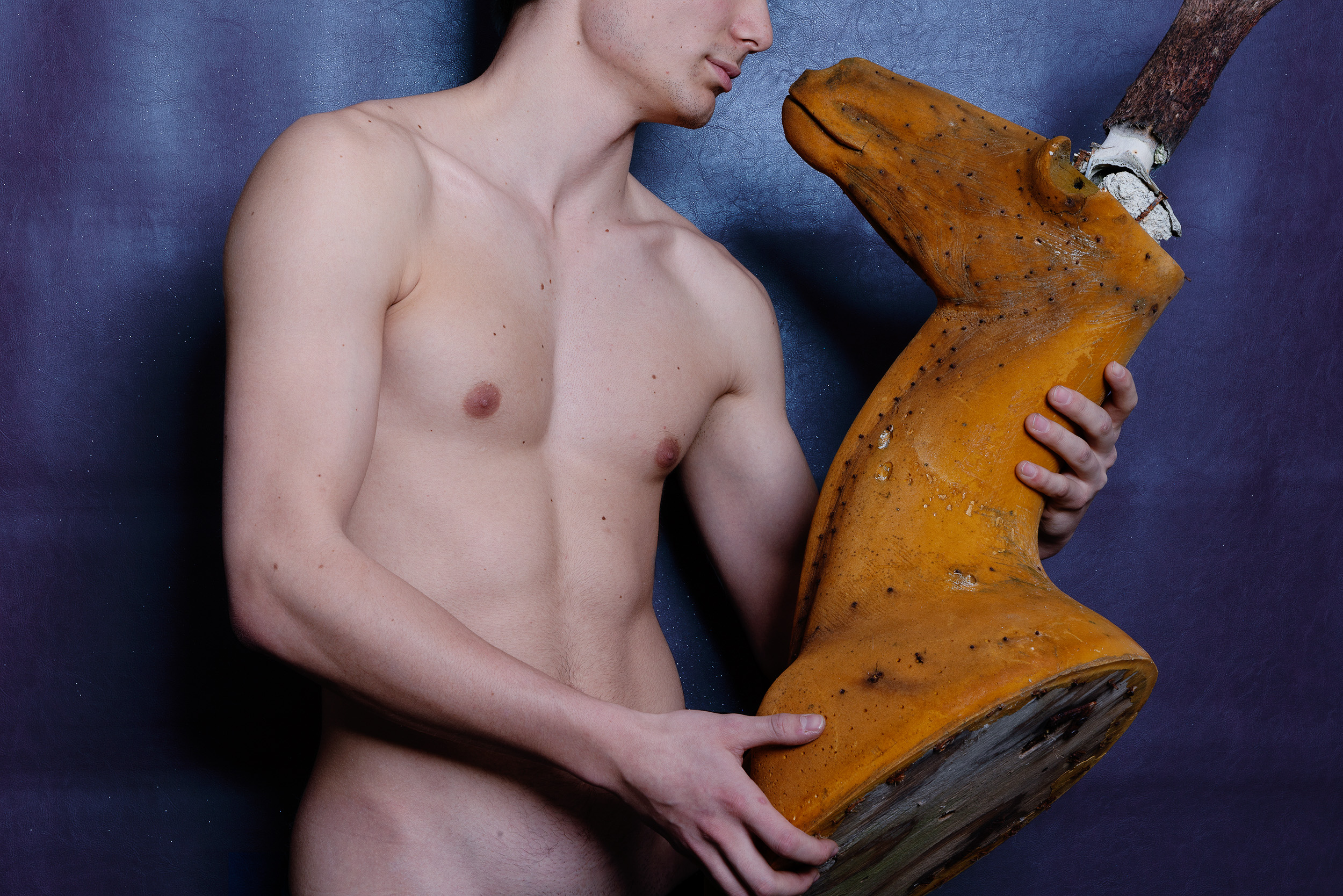 Sargent’s photos, influenced by famous photographers like Man Ray and Paul Outerbridge, engage viewers through scenes of bondage, insects, and parts of the human body that are traditionally seen as unflattering.

“I had an evolving process for my series and started from a more theoretical concept looking at the photographic avant-garde that through the process of photographing evolved into my current series,” Sargent said. “Much of my series was about finding the right subjects to photograph, and I am grateful to all of the models who let me capture these moments. I became really interested in how to photograph a body being presented to the viewer without objectifying the subject. I attempted to create images that simultaneously felt familiar and unexpected, while allowing naked bodies to maintain personal autonomy.”

While radically different in subject matter, Emma Cantor’s “The production of Certainty” utilized photography to push its audience to question the implications of our digital age of big data while also humanizing the workers employed in these fields.

“[This thesis] tracks the material existence of information in the Digital Age,” Cantor’s artist statement reads. “Information is examined as an object—one that is transforming and shrinking as technology’s capacity to store information continues to expand. The camera reveals the material reality of information that is concealed from public eye—windowless buildings store thousands of data servers; fiber optic cables hide within the walls of our homes; and confidential information is destroyed daily in high-security facilities.”

In exploring the way the excesses of information mediate our digitized existences, Cantor captured a number of different subjects, from tech workers and the inventory of a private investigator to the founder of Wikipedia.

“I became really fascinated by shredding facilities from a conceptual and formal standpoint,” Cantor said. “I was interested in the idea of the destruction of information—the destruction of a nonmaterial thing. Once I managed to get access to this facility, a process that took quite some time, I began thinking of how I wanted the conceptual groundwork of my thesis to expand further. The remaining photos were taken with a strong direction about what I was after.”

The heavy conceptual component of this evocative project posed its own set of challenges for Cantor, who looked back in history to other photographers who worked through similar difficulties in their artistic process.

“I turned to the work of artist Tim Davis,” Cantor said. “He has a way of going about making a photo series with very specific ideas behind them, while still allowing for a broad range of different types of photos to exist under the conceptual umbrella of his work. Taryn Simon was also very formative to me. I think I share with her a similar desire to use the camera as a revealing device for spaces that are normally uninviting to the camera’s presence.” 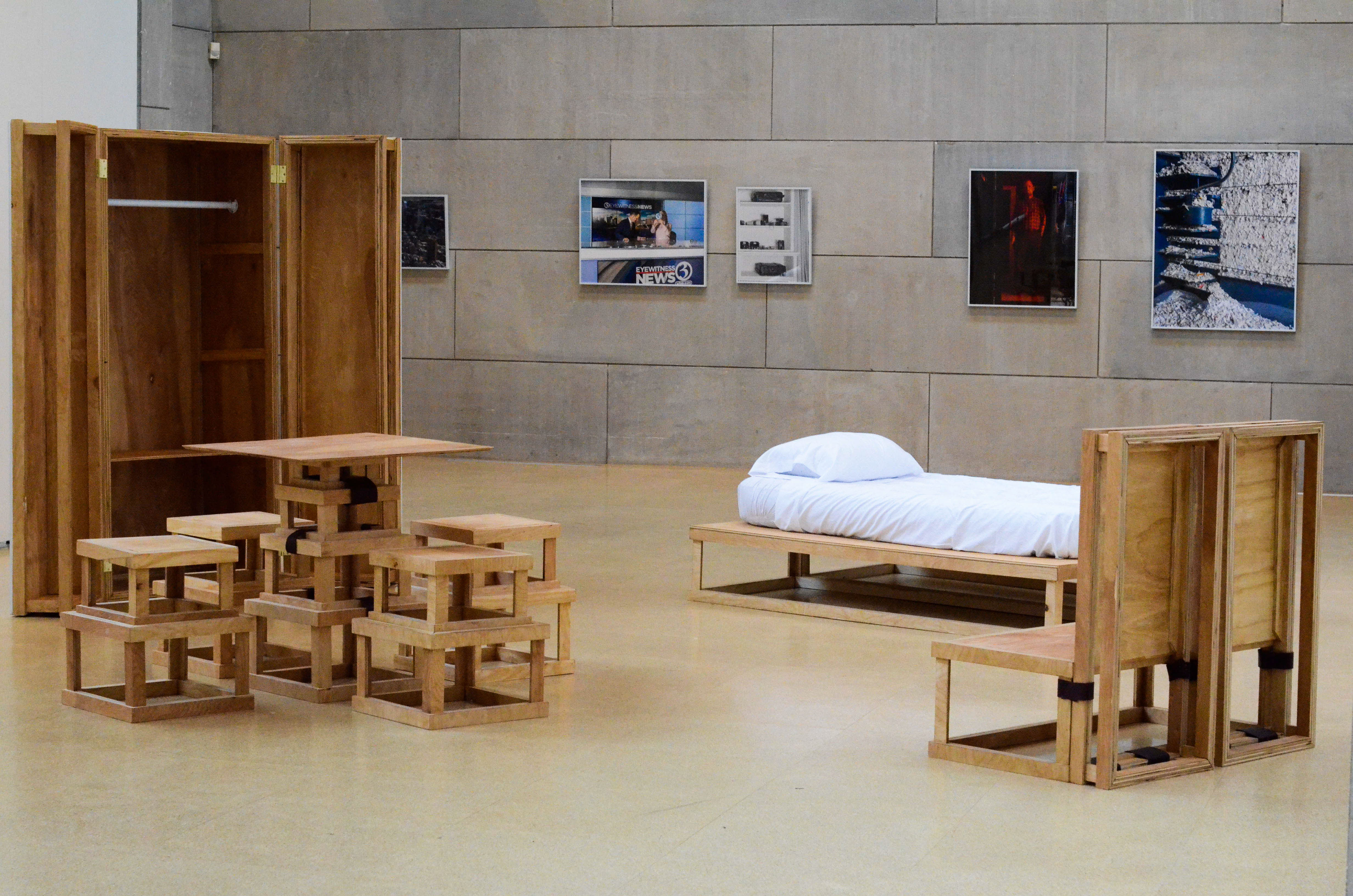 In addition to photography, this week’s exhibition showed a number of installation and sculpture pieces. Olivia Gorman’s “NOMAD: furniture goes where life takes you” looks at furniture as a symbol for the anxiety of being in your twenties, not permanently tied to a place and at the mercy of an unpredictable job market.

“I got the idea for my thesis from my older brother…. After college, there was a lot of moving in a short period of time and moving furniture in and out of storage is a pain,” Gorman said. “I thought what if there was a set of furniture that could be easily unpacked, stored and moved around. This led to me coming up with the idea of fitting furniture into a box. There is a table, four chairs, a lounge seat, a bed, and a closet. When they are all stored away they are housed in the box, but when the furniture is being used the box becomes the closet.” 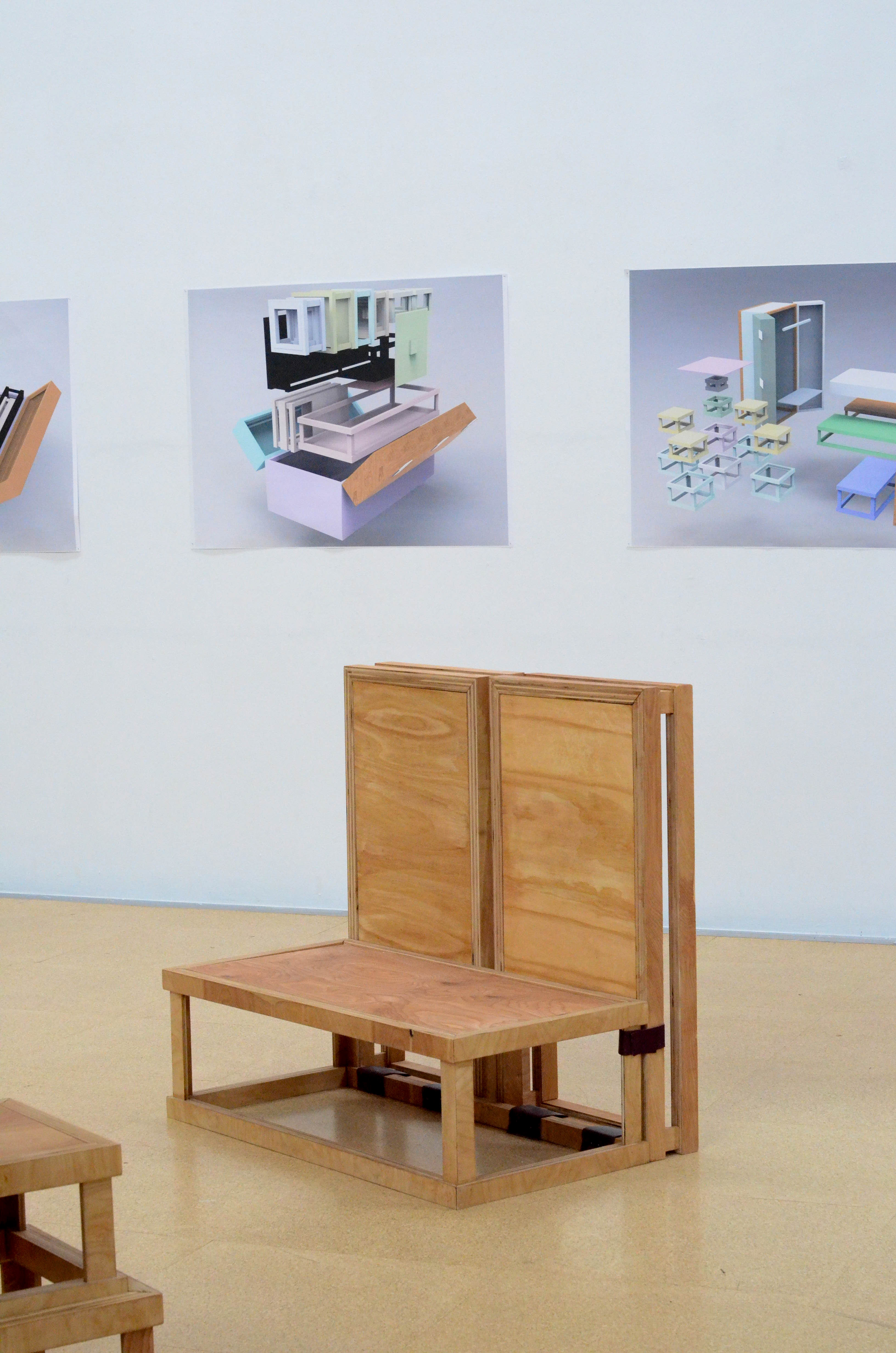 The furniture box that Gorman designed, imbued with emotional resonance, replicates early Louis Vuitton travel chests. These pieces of luggage were used in the 19th and early 20th centuries for steam boat travel when people would pack up everything they owned in a box for several months.

“When I designed this I was thinking of people between the ages of 20-30, so I wanted to created something that was functional, easy to use and aesthetically pleasing for a group of people that are staying in one place for super long periods of time,” Gorman said.

Dominique Nunnally also used sculptural techniques in her “Milwaukee Commons,” an urban planning architectural design that reimagines public spaces in Milwaukee, a city that has undergone drastic changes in the face of new technology and business models.

“Over the span of around four years I have seen the Milwaukee Grand Avenue Mall be a place where everyone goes to engage, relax, buy, and simply a place of central gathering,” Nunnally said. “However it has now become a place that only a few people attend causing many shops to leave, and the overall feeling and environment has lost its luster. This made me look at…dead malls and in general how some architects are trying very creative and unique ways to assess this current issue that has been happening in the past decade.”

Nunnally calls attention to the way in which retail tech giants such as Amazon have fundamentally reoriented how public spaces are inhabited.

“I proposed creating a structure that can be for the community and function as space where people can gather in places like cities or small towns, where the community should be most prevalent yet sometimes fail to be,” Nunnally said. “Through extensive research of the demographics of the city of Milwaukee, there are many organizations that could benefit from a unique space. Much of what Milwaukee city strives to achieve spaces so that family and Commercial can benefit as one.” 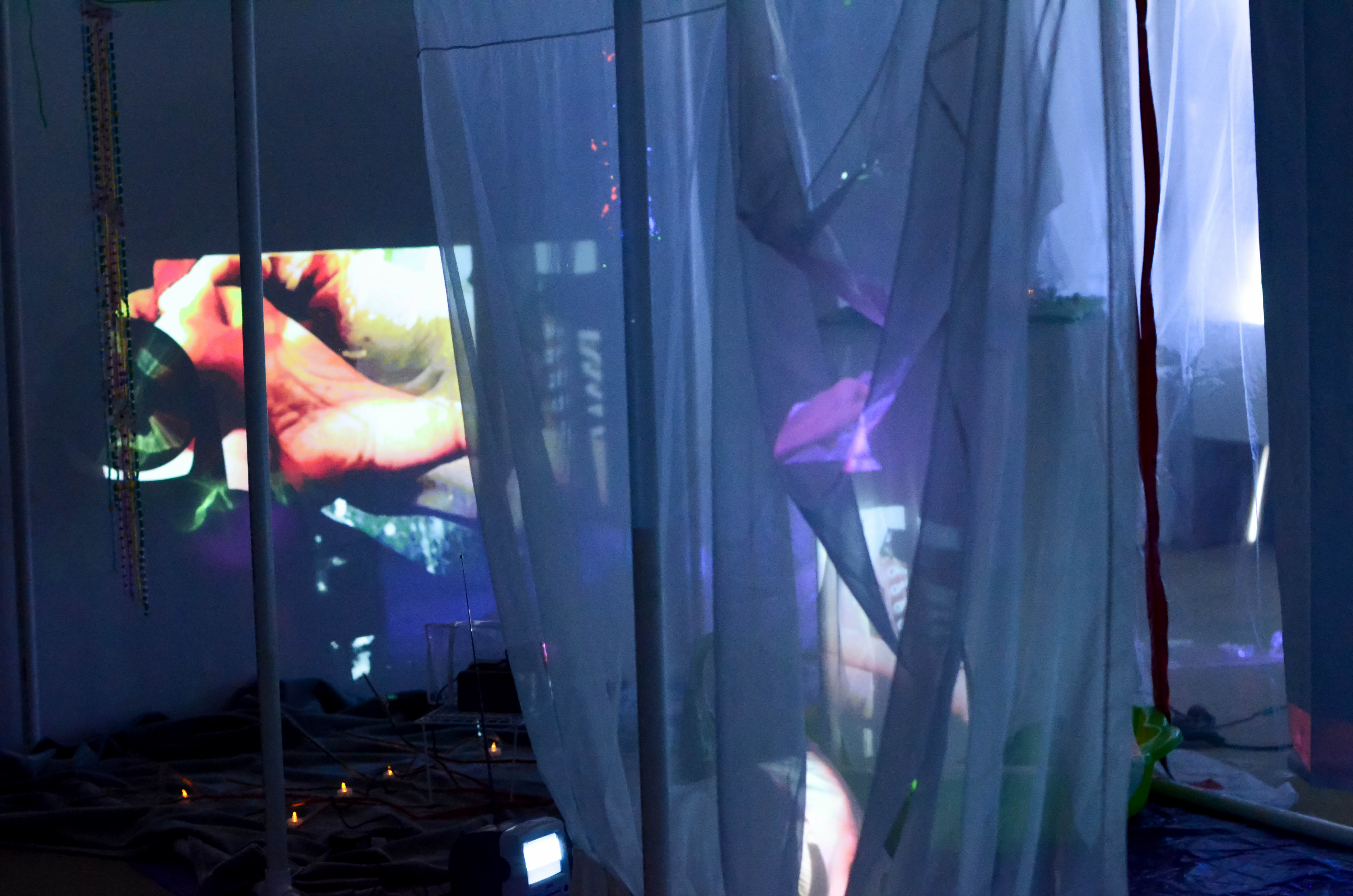 Ona Lepeska-True’s “Eight Glasses of Water” is an installation piece that delves into the poignant difficulties of intimacy and identity in relation to others as well as oneself. With a combination of found objects, mirrors, refracted light, and video art, the work creates an all-immersive installation that keeps the viewer on edge, constantly exploring different angles to find something new.

“If intimacy is a certain kind of being-seen, how do I look?” Lepeska-True’s artist statement reads. “How do I look for comfort in seeing, in being-seen? Longing for intimacy, we peer in through foggy windows and finger-printed screens, looking to hold, to be held…. How do I peer into my girlhood and imagine a boyhood just out of frame? How do I look at my girlhood, though the sticky meshes of my memory, and listen for a boyhood?”

In raising these questions of emotional exchange and introspection, the work self-admittedly explores them.

“The result is an environmental collage of images, sounds, things, watery moments which remind themselves of one another: a messy mapping of forms to behold and be held,” the statement reads. 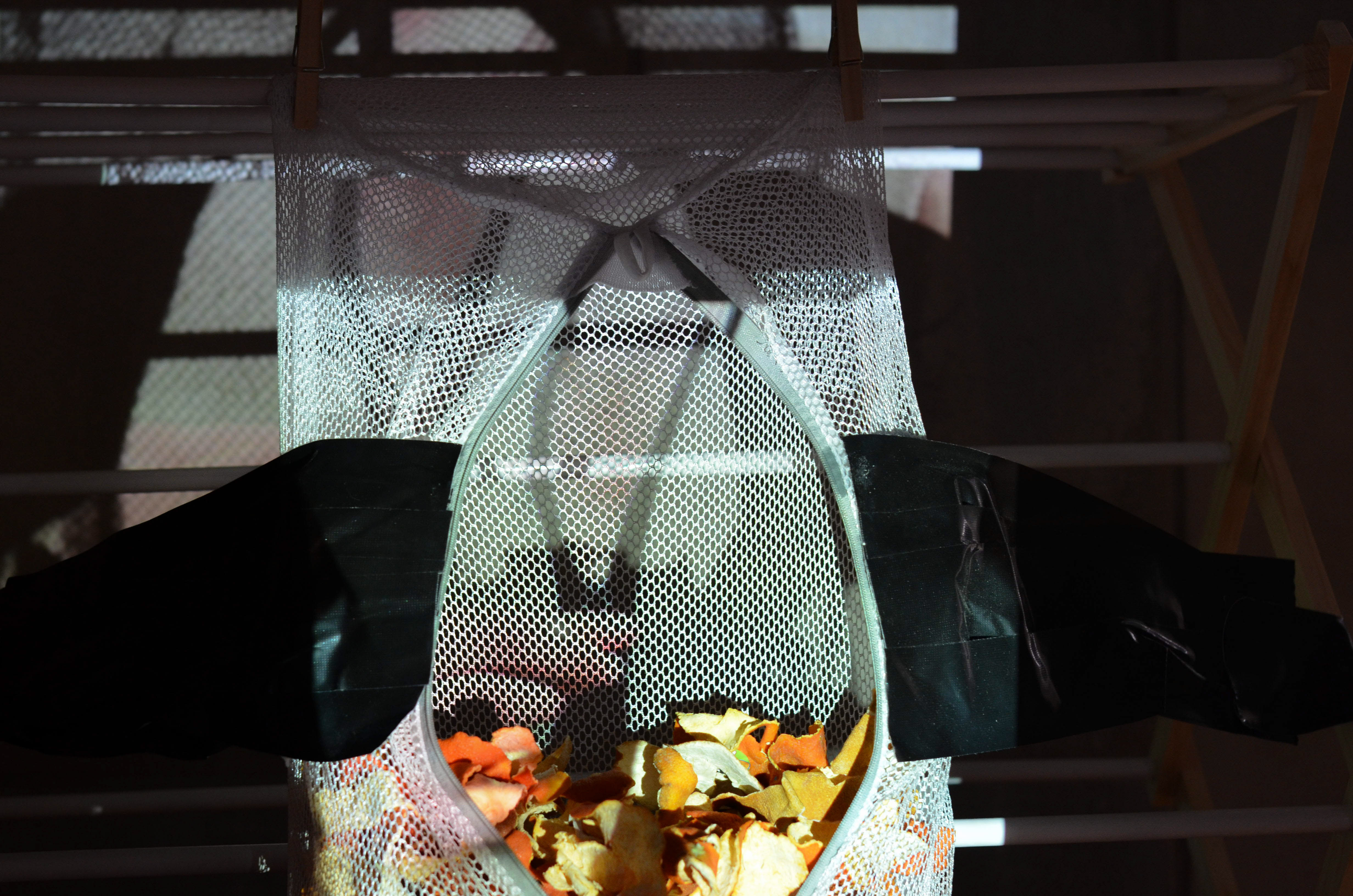 The other installation piece, “Without Pith” by Toby Meyer, offers an eerie and moody journey through a cavernous arrangement of found objects, video, and sound art.

The topic of the installation is introduced at the beginning of the piece through a poetic narrative that leaves the work’s meaning beautifully mysterious. As the introductory poem highlights, the piece works through the physical and metaphorically charged acts of “putting things on and taking things off” within the “magic dreams of garbage, fairies, cocoons filled with gooey busting and pulpy peels that linger twisted.”