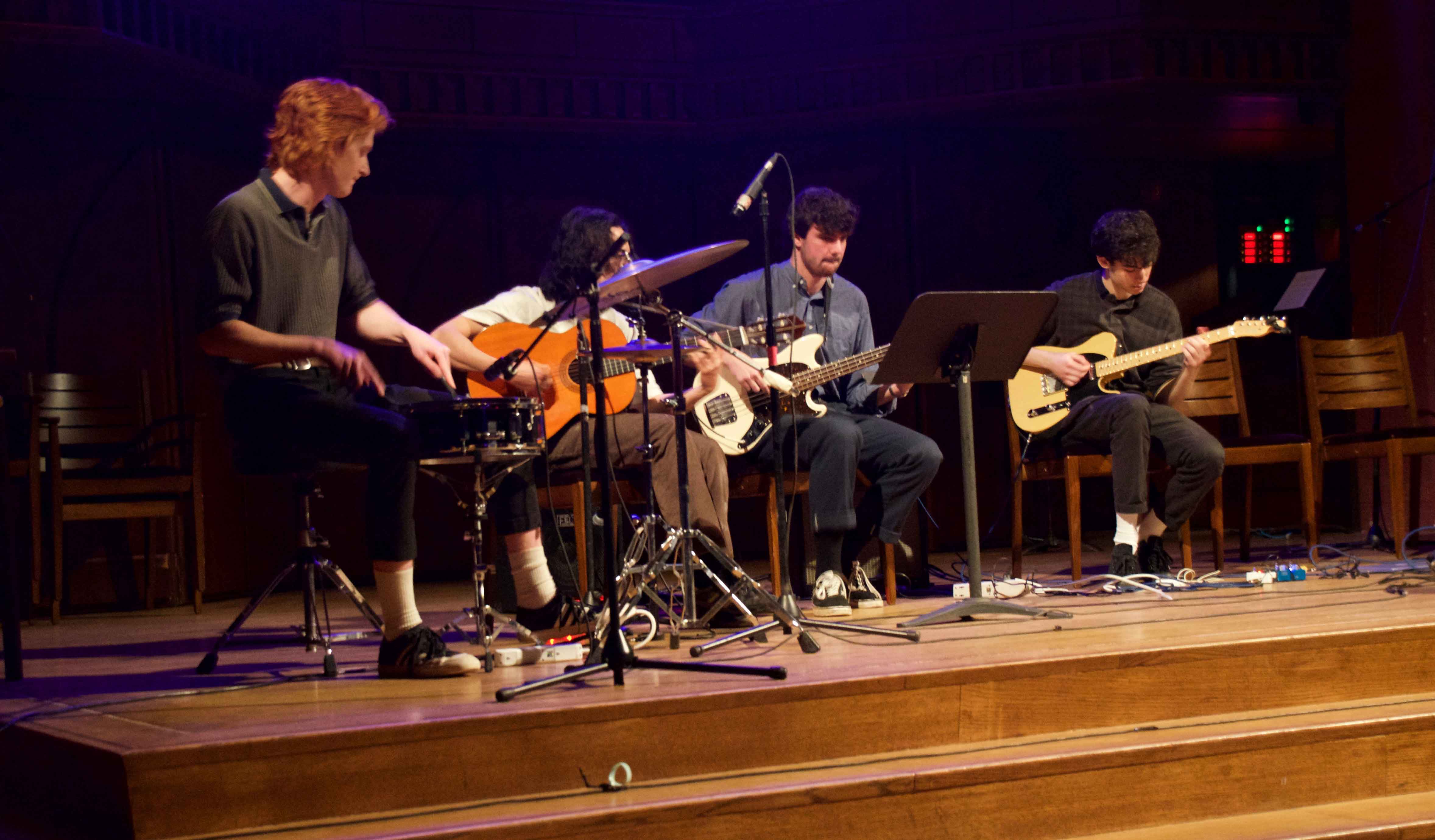 Rogers’ project, which took place in Memorial Chapel on Friday evening, included a couple original pieces and several pieces that he arranged, including an Elliott Smith song, a few more upbeat, jazzy numbers, and a bossa nova piece written by Brazilian composer Antonio Carlos Jobin and digitally arranged by Rogers. Rogers started off the concert with an untitled solo guitar mediation, setting the tone for a performance that was both incredibly solid instrumentally and dynamic in terms of genre.

One of the standouts was Rogers’ original piece, “Speech/Selling Your Timber,” a spoken-word piece inspired by James Falzone’s “Ludus in Spectro.” The piece began with the audience picking random numbers, which then determined which words would trigger musical tones, along with text which was read by Meg West ’19 and then acted as an input affecting the pitch and duration of the tones. Another was Jerome Kern and Oscar Hammerstein’s “The Song is You,” which Rogers performed with Declan Moy Bishow ’19, Chris Reed ’19, and Jake Abraham ’20. The combo was incredibly tight, moving in and out of different written and improvised sections with ease and great energy and communication.

“One of my main goals for my recital was to write/arrange pieces for different instruments in a variety of styles that I hadn’t worked with before.” Rogers said. “I tried combining jazz, experimental, and more contemporary music in the hope that it would keep the audience engaged throughout.”

Harrison Nir’s senior recital, “In Tel,” which took place in World Music Hall this Friday, took its name from the Hebrew word “tel,” which refers to a hill or mound of earth, especially one containing old ruins.

“The whole piece was built on the theme of the Tel, on the material and geological accumulation of life,” Nir told The Argus.

“In Tel,” which blurred the lines between musical performance and installation, combined live instrumental music with recordings and videos of various people and places in Israel, where Nir’s family is from, and Palestine. The project consisted of three separate pieces: “Threnody (for Home Demolition),” “Vireality,” and “In Souq.”

Of these, the first and last pieces took place in the main performance space on the ground floor of World Music Hall, but “Vireality” required audience members to move along with the musicians to the building’s lower level, where a screen played footage of Israel and Palestine, alternating videoclips of sweeping landscapes and peaceful skylines with scenes of military brutality and violent altercations. This footage was pulled from YouTube, but the voice recordings that accompanied it were taken by Nir himself, who conducted interviews and collected audio this past winter when he visited Israel and Palestine.

“The voice recordings…came from all over the place,” Nir explained. “The voices of the children came from a small Bedouin village called Um Al Khair…[which] is also where I recorded the voice of Tariq, one of the spokespeople for the community there, as he spoke about the home demolitions his community has been facing and dealing with for two decades. However, the main voice in the piece was a recording of a young man and activist Yosef Azzeh. Yosef was the eldest son of the family I visited in Hebron and, when we met…, he spoke to me about his experience of being a Palestinian person in the current state of the occupation—of his desire for peace. The piece is dedicated to him.”

Matthew Forker ’19’s thesis concert was a premiere of new jazz compositions and one arrangement by Forker himself. The compositions were performed by a septet consisting of Charlotte Babbin ’22 on the flute, Ben Lyon ’21 on the alto saxophone, Lisa Stein ’21 on the cello and vocals, Marvin McNeill GSLP on the trombone, Jolie Villegas ’22 on the bass, Jack Warnock ’22 on the drums and percussion, and Forker on the guitar. The compositions veered into experimental jazz and even more cross-genre music. The pieces were complex and dissonant at times, but the musicians did an excellent job of pulling them off. Forker will have his first album come out this summer, which he asked concert attendees to keep an eye out for.

“Honestly, this project really reflected to me why this department is so special,” Forker said. “The attitude here of do whatever you want, but do it really well, is pretty rare in liberal arts schools, I think. It was a really grueling process, but I grew as a composer and bandleader because of it.”

“The idea for the thesis came because since about 2015, when I’d meet jazz musicians and ask how they practiced ‘feel’ and ‘time,’ rather than say ‘play with a metronome,’ or ‘do this exercise,’ they’d pretty regularly say ‘play along to Dilla,’” Cerny said. “Part of the dues you pay as a young musician is getting really inside the music of the players who’ve laid the groundwork of the music you play. The musicians I love definitely listen to Blakey, Elvin, Tony, Higgins, etc., but they also basically all listen to Dilla, too. ‘Jazz’ (read: Contemporary Improvised Music) is such a fluid art form, and while the greats of the mid-20th century are the starting place of listening and study, influences come from all over. He’s so incredibly important to contemporary music that I was pretty excited to spend all this time on him.”

In aiming to treat Dilla as a composer, rather than just a beat-maker, as he is more often characterized, the thesis captured Dilla’s innovative style of making “phat beats” and tracking his influence on other artists such as Common, D’Angelo, Questlove, Erykah Badu, Kanye West, Karriem Riggins, and Bilal.

With Cerny playing the drums, Alex Tripp ’21 on guitar, and Gabe Leeman ’20 on bass, the group launched into a J Dilla classic, “E=MC2,” from his album, The Shining. The group really hit its stride with D-Angelo’s melodic “left-right” before launching into a series of Cerny’s own original Dilla inspired compositions. Daphne Gampel ’19 and Laszlo Feher ’20 sang the vocals, complimenting one another’s distinct but different jazz and hip-hop styles on the performance’s variety of tracks and melodic shifts.

Reflecting on the performance, Cerny appreciated the contributions of the students who helped him put the performance together and remarked on the new understanding of his music that he gained during the thesis process.

“My whole band: Gabe, Alex, Daphne, and Laz, absolutely slayed,” he said. “I asked them to play some pretty hard music, and they really brought creative fire to their parts. Sam’s help on production, Zack Lobel’s [’19] lighting design, and Wilson Lai’s [’19] videography definitely made the show pop. My primary objective was actually a pretty emotional one for me: over the course of my life I’ve developed quite a deep love and appreciation for J Dilla, and in this last year of the project not only did that strengthen, but I began to feel a real responsibility to honor Dilla’s work as best and as often as I could.”

Next week, several more senior music majors will be presenting concerts. Camille De Beus’ thesis performance will be Friday, April 12 at 7 p.m. in Crowell Concert Hall, Daphne Gampel’s will be Saturday, April 13 at 7 p.m. in World Music Hall, and Isaac Price-Slade’s will be Sunday, April 14 at 1 p.m. in Russell House.