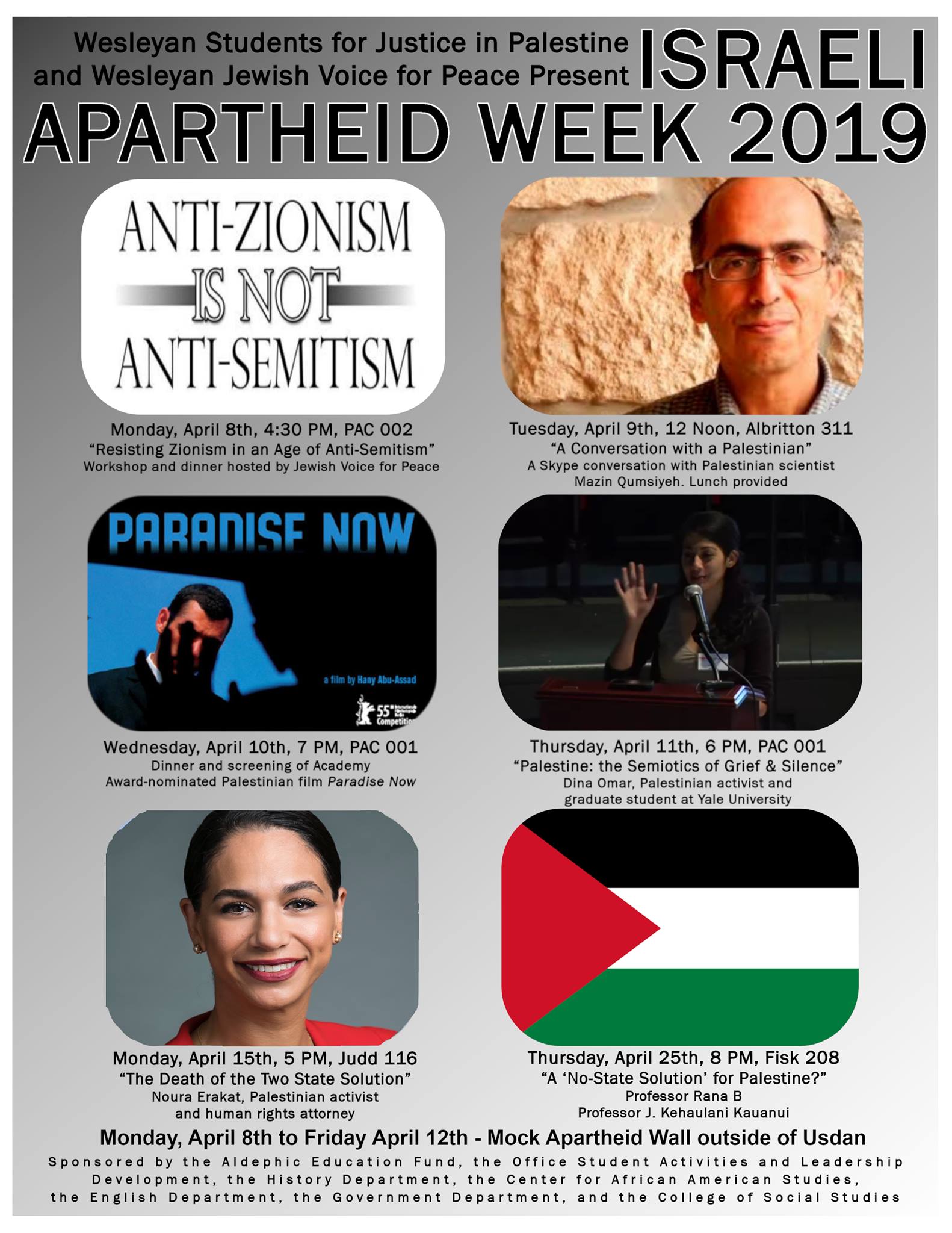 On Monday, April 8, Students for Justice in Palestine (SJP) and Jewish Voice for Peace (JVP) commenced the University’s Israeli Apartheid Week, which is sponsored by the Resource Center, the History Department, the Center for African American Studies, the Government Department, and the College of Social Studies, among other groups on campus. The week, which has been held annually for over five years, consists of six main events that aim to increase understanding of the ongoing conflict through the perspectives of both Israelis and Palestinians.

The week began with a workshop and dinner entitled “Resisting Zionism in an Age of Anti-Semitism,” hosted by Jewish Voice for Peace. On Wednesday, there will be a dinner and screening of the Academy Award-nominated film “Paradise Now,” followed by a talk from Palestinian activist and Yale student Dina Omar on Thursday. Other upcoming events include lectures from activist and human rights attorney Noura Erakat, as well as talks by Professor of American Studies J. Kehaulani Kauanui and Assistant Professor of History and Contemporary Arab Studies at Birzeit University Rana B., respectively titled “The Death of the Two State Solution” and “A ‘No-State Solution’ for Palestine?”

Kauanui, who is involved in the planning of the week, noted that this year will include an especially prominent and interesting set of speakers.

“This year’s [Israeli Apartheid Week] line-up is remarkable, both in terms of the collaborative partnership between our campus chapters of SJP and JVP, and given the prioritization of Palestinian speakers covering a broad array of political issues that address the settler colonial roots of the Israeli project,” Kauanui wrote in an email to The Argus. “The offerings of this year’s IAW at Wes are important on multiple registers, but notably because they are educational and serve as crucial forms of anti-normalization,”

The variety of lectures, discussions, and film screenings makes this year’s Apartheid Week the most expansive in recent memory. In addition to these events, there will be an artistic representation of the Apartheid Wall, erected in Palestine in 2005, outside of the Usdan University Center from April 8 to 12. The replica wall, which has been handed down since 2013, is meant to be a symbol of division, as well as the artificiality of territorial lines.

“What we’re trying to do is remove divisions that have been established between people unnecessarily,” said an organizer for the SJP, who asked to remain anonymous in order to avoid retaliation from pro-Israel groups. “The wall itself is a symbol of the division that has been erected between these people. What we’re trying to do is to show how artificial it is, by putting it up and taking it down.”

The thematic elements of the wall have changed over the years to meet the political moment, including an update, in 2016, to include a reference to Trump’s intended wall along the Mexican border. The organizer expects changes to the wall will be made in future iterations.

The student organizer explained that University reaction to Israeli Apartheid Week has also changed since its inception.

“I think across the years, especially earlier years, the students had a lot of trouble getting the administration to cooperate or allow these events,” the organizer said. “But as we’ve progressed, the University has come to accept this as a yearly event that happens. They respect us, and they respect our opinions on this and give us the space and resources to do it.”

In addition to bringing attention to the ways in which cultural narratives surrounding Israel and Palestine can be narrow or inaccurate, the organizers of the events aim to redirect the conversation surrounding the conflict, pushing against divisions between Israeli and Palestinian voices. Organizers also wish to draw a separation between Judaism and Zionism.

“Our main goal is to retake the narrative, especially in a time where Palestinian voices are at their weakest” the organizer for SJP said. “A lot of the narrative has been created and propagated by Zionists, and our goal is to introduce truth into the matter.”