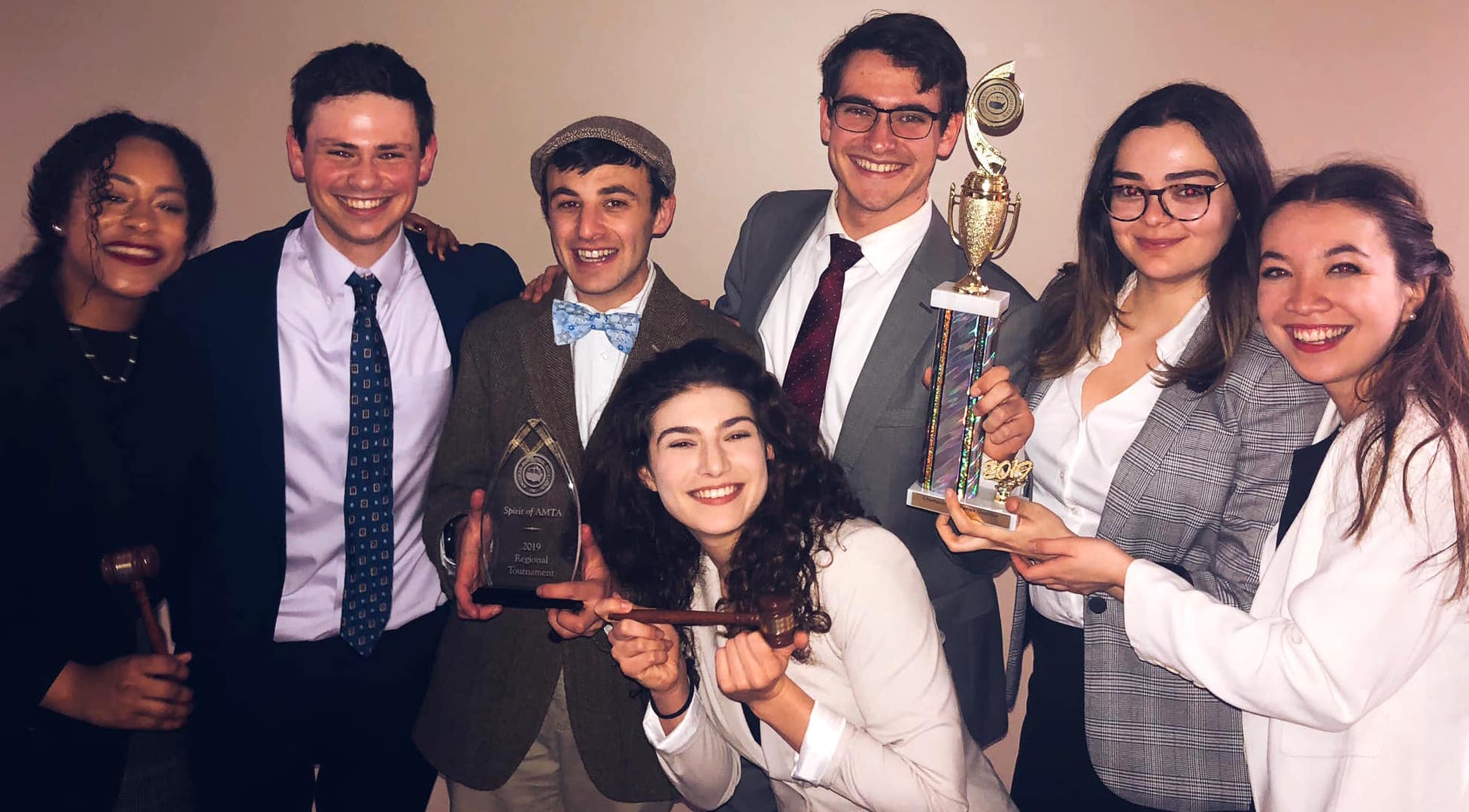 This past weekend, for the first time ever, Wesleyan Mock Trial sent two teams to the American Mock Trial Association (AMTA) National Championship in Philadelphia to compete against 46 of the best college mock trial teams in the country. The tournament was a success, with the University’s A-Team placing eighth in the Temple Law Division and the B-Team winning the Spirit of AMTA Award, an award given to the “nicest team at the tournament.” Additionally, team members Fitzroy Pablo Wickham ’21 and Kathryn Machanic ’22 won All-American Witness awards.

The group, which first sent a team to Nationals in 2017, competes with teams from other schools around the country in trial simulations. These simulations, which require participants to act out and argue made-up court cases, draw on students’ public speaking skills and allow students to develop a practical understanding of legal procedures.

“It’s 50 percent acting, 50 percent debate,” Captain Heather Pincus ’19 explained. “We have people playing witness roles and people playing attorney roles, and we put on a case. We have to argue our side, we have to learn both sides of the case: the plaintiff and the defense or the prosecution and the defense. We do both criminal cases and civil cases, so we learn a lot about the legal system, and we also get to develop acting skills which is not something I thought I would get out of the activity but [is] something super valuable.”

“If you’ve ever watched a courtroom drama like ‘Law & Order,’ you would see the very edges of what we do,” member Drew Kushnir ’22 added.  “Attorneys questioning witnesses. You’re trying to tell a story of what happened.”

At the beginning of the year, the team received a packet from the AMTA which described the case they would be arguing throughout the year. The team then used the packet to prepare and perfect the case and their arguments at tournaments in the fall and winter.

Teams argue this case in various scrimmages in the fall, at Regionals in February, and at the Opening Round Championship Series (ORCS) in March. After performing the same case many times during the lead-up to Nationals in April, teams take on a new case for Nationals in order to level the playing field.

“These past two weeks have been insane,” member Sam Lao ’22 remarked about the team’s preparation for the tournament. “We’ve had the same case for months that we’ve been working so hard on, and we just had to scrap it all and start completely over with this new case.”

Wesleyan Mock Trial largely functions independently, with only students and alumni involved in training new members and preparing for competitions.

“Being student-run is really hard, and it is time-consuming to do a lot of the logistical things schools do easily,” Pincus said. “We have to do all the logistics ourselves, which is a second job in addition to preparing for actual competition.”

Pincus also explained how many schools have coaching resources that Wesleyan Mock Trial does not have. Instead of hiring students from affiliated law schools or local attorneys, the team relies on help from former team members. Currently, Erica Arensman ’17 and Nathaniel Warner ’17 serve as the team’s alumni coaches.

As hectic as prepping for Nationals has been, the team uses the stress of preparing this new case to strengthen relationships among team members and ready them for the intensity of the tournament.

Even with all this preparation, though, the team has no way to know how the other side will respond to the case and their arguments.

“What I tend to enjoy is that in Mock Trial, you are only half the equation because the other team is going to do things,” Kushnir explained. “You can have tons of preparation but ultimately when it comes down to it you don’t know what’s going to happen. So there’s this beautiful space of organized chaos in every trial.”

The upperclassmen have been impressed with how the team has changed from a smaller and less competitive program to a Nationals-bound team.

“The team has evolved a lot,” Pincus explained. “My freshman year, we were a team that had never placed at a regional tournament, which is the lowest level…. We didn’t have any coaching so we were kind of at a disadvantage compared to other schools. We got pretty good my freshman and sophomore years because we worked really really hard and we still work really really hard. But the biggest change for this year, where we were able to perform more reliably and get these big wins is [because of] the freshman and the underclassmen on this team…. They’re incredible. They’re making the program. And our ability to train them has improved a lot…. Nat Warner and Erica Arensman were invaluable this year in training us.”

With such a strong group of underclassmen members, the team’s upperclassmen are excited to see how these students will continue the upward trajectory of the team’s performance.

“Something that’s really cool about this team in particular is that the majority of people who are going to Nationals, and by majority I mean 15/17 of the people going, are underclassmen,” member Nell Buechler ’20 said. “The fact that we have these 15 incredible competitors who are going to continue to make this program great [in the years to come] is amazing.”