“Accepting Existence on its Own Terms”: “Eurydice” Comes to the Wesleyan Stage 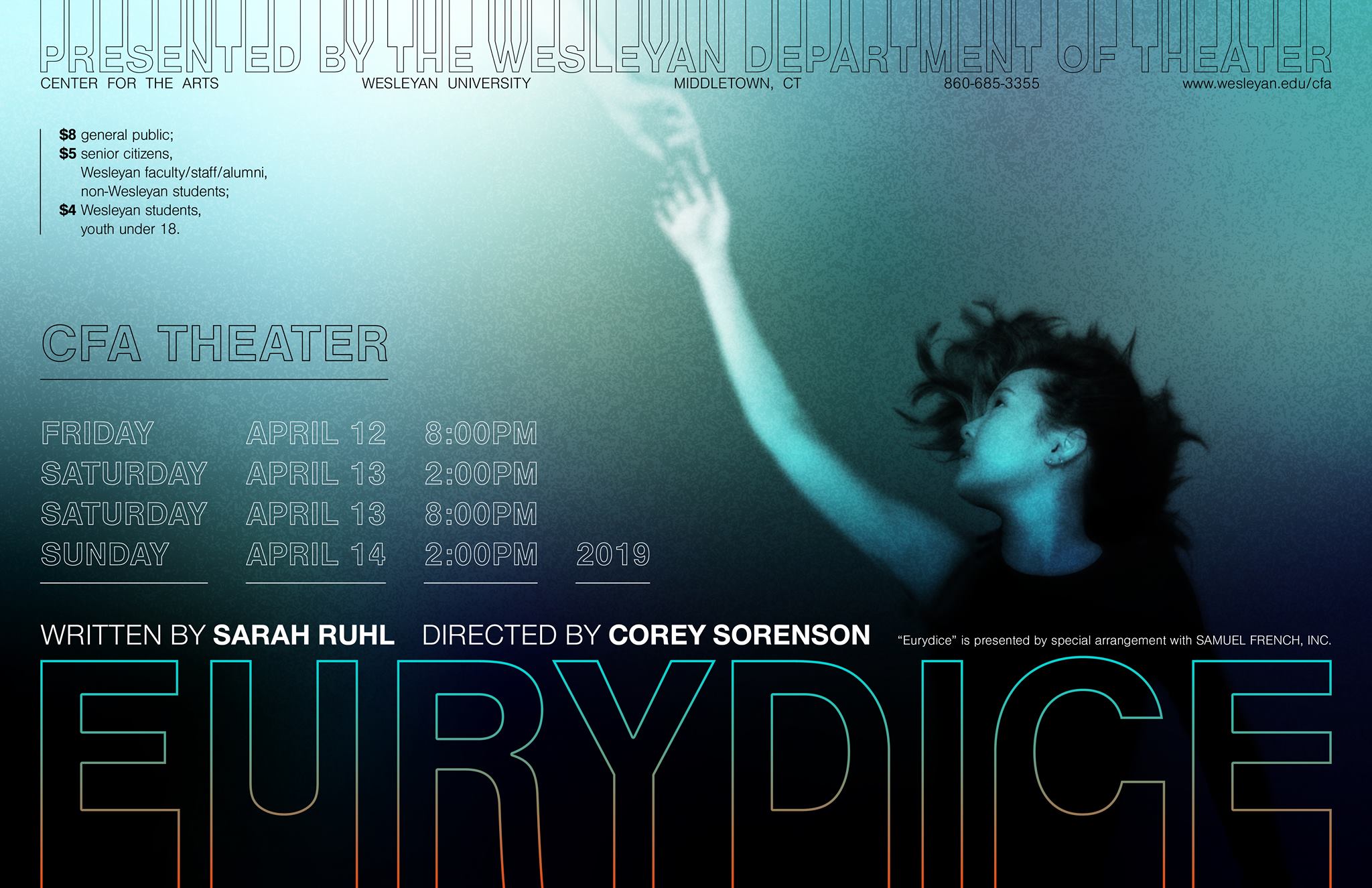 “Eurydice,” this semester’s Theater Department production, takes on the classic myth of Orpheus and Eurydice through the lens of the heroine. In content, this production shines through its different perspective on the original tale; in its production, students from all walks of Wesleyan life have joined forces to create this year’s performance.

In the original myth, Orpheus falls in love with Eurydice, yet their engagement ends in tragedy when Eurydice is brought into the underworld with Hades. Orpheus descends into the land of the dead to bring Eurydice back, playing his lyre in order to convince Hades to let her go. As Orpheus’ music melts Hades’ heart, he agrees to let Orpheus take Eurydice from the underworld. There is just one condition: They must not walk side by side, but rather have Eurydice follow. If Orpheus turns around to look back to see if Eurydice is following, she will return to the underworld. Close to the land of the living, Orpheus looks back and loses Eurydice forever.

Written by renowned playwright and poet Sarah Ruhl, “Eurydice” breaks not only the conventions of this myth, but also norms of the theater. It contains a little bit of realism mixed with surrealism and absurdism—and what director and Visiting Associate Professor of Theater Corey Sorenson calls “imaginative possibilities.”

“At the heart of this piece is a poem,” said Ava Calabrese Grob ’20, one of the production’s student assistant directors. “It’s a beautiful challenge to realize how that poem comes to the stage.”

“The thing that I love about the play is that even though it is Orpheus looking back, it is still a story about how you have to accept existence on its own terms as it is right now and forward from here,” Sorenson said. “The act of looking back—looking back on your life, looking back in memory and in motion—can create suffering if you’re not really present for your life.”

“Accepting existence on its own terms” has become Sorenson’s thesis for the production, something he hopes the audience understands as the main theme of Ruhl’s work and the Wesleyan production.

“It’s interesting and very moving to watch Eurydice to get the opportunity to leave, go back to the land of the living and then, for various reasons not be able to,” Sorenson said. “I don’t want to say exactly why. I want that to be a bit of a surprise for the audience. But she comes to accept existence on its own terms. What that means is letting go of life, and the trappings of life including memory and feeling, to exist in this new dead state. It is tragic and horrifying, but somehow beautiful at the same time.”

Students at Wesleyan have been integral in creating this beautiful production, involved in every department, from cast to crew.

“One of the things that the theater department really prides is student creation and student interfacing with the making of theater at every level,” Sorenson said.

Students who participate in the process receive academic credit through the theater department and are often required to be at rehearsal over five nights per week. Although students work with faculty members in their theatrical arenas, Sorenson says that students play active and important roles in each aspect of production; they’re not simply assistants or busy workers.

“I have tried as a director to fold my assistant directors into the process,” he said. “Especially as the process has gone on, they’ve seen what I like about it and where I want to take it. I’ve even let them rehearse actors without me a couple of times, and they’re doing a lot of really nice work.”

Sorenson notes that this is in contrast to the professional theater world, where assistant directors simply sit and support the process. They act on an assistant level, completely under the control and will of the production’s main director.

“Because it’s an educational environment, I wanted to take a step beyond that,” Sorenson said of his current work. “Specifically, one of my assistant directors, Lauren Stock [’21] has also been a dramaturg. Ava has been very helpful in coordinating with the scenic side of things because that’s her area of expertise. They have both been very instrumental in doing some of the staging involving the characters of the stones. That’s been honestly a lot of fun to watch.”

Beyond his assistant directors, Sorenson has enjoyed working with students across the fields at every level of production.

“I think my favorite part of the process has been working with the students to see it all come together—that’s vague, but it’s true,” he said. “I enjoy moments of discovery in rehearsal with actors and then in meetings post-rehearsal, I love moments of discovery with my stage manager and my assistant directors. All of the students—I don’t know this this is unique to this production, I doubt it—they’ve had a great combination of both being very smart and insightful and coalescing around a unified vision and idea. They are very smart and talented creative people who aren’t stepping off on their own so we keep the production cohesive.”

Audiences can witness the work of Wesleyan students and faculty this weekend from April 12-14. Tickets for are available on Center for the Arts website and at the box office in Usdan.

Zoe Kaplan can be reached at zkaplan@wesleyan.edu.