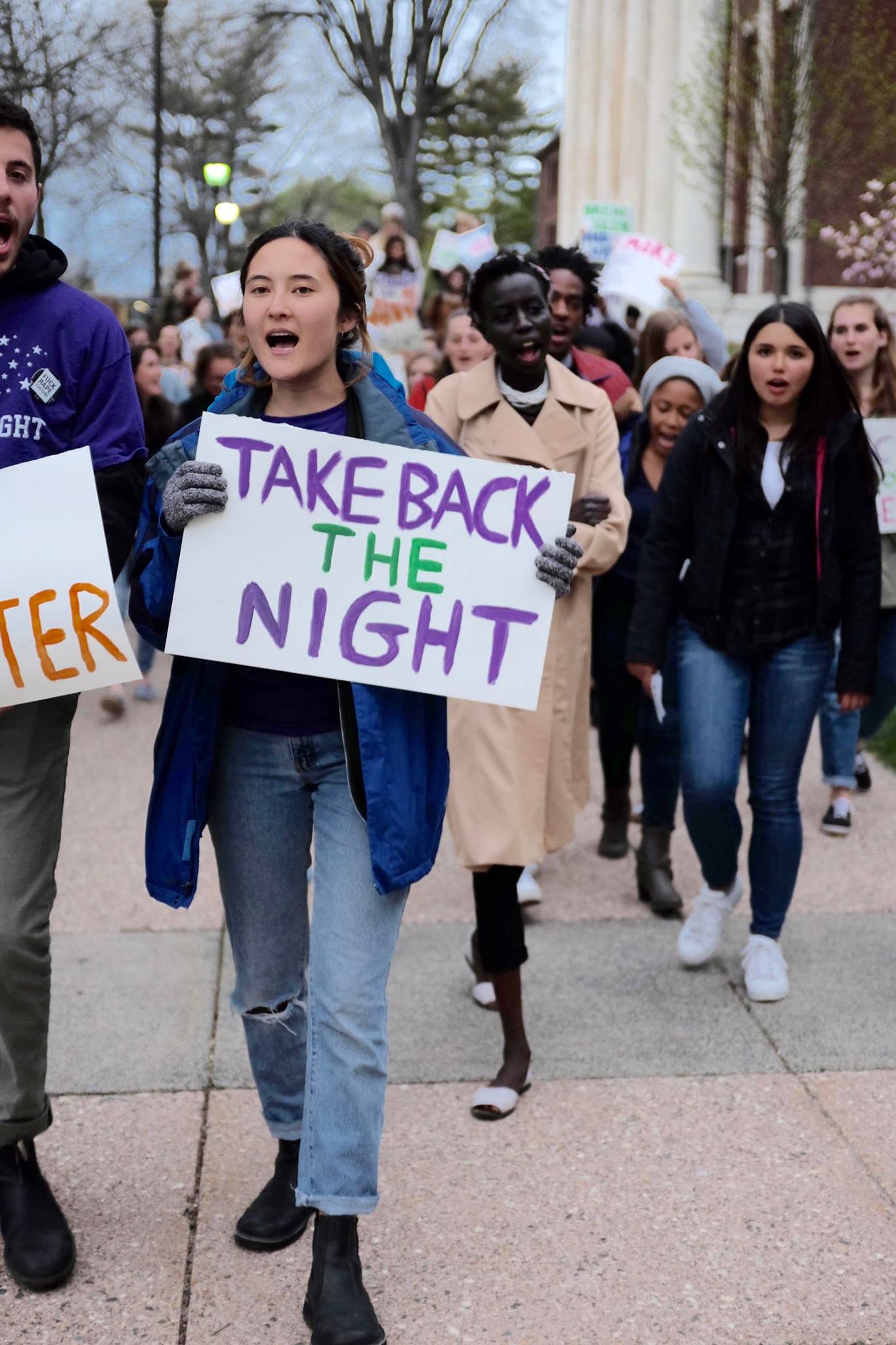 Students have teamed up to hold Survivor Solidarity Month (SSM) this April, a series of events that will culminate with this year’s Take Back the Night on Thursday, April 25.

Office of Survivor Advocacy and Community Education (SACE) Intern Rachele Merliss ’19 and Bystander Intervention Intern Jewelia Ferguson ’20 were both involved in last year’s events, Sexual Assault Awareness Week. This year, the committee tasked with organizing the month of events refocused its goals to publicize the resources on campus available to survivors of sexual assault.

Ferguson noted that the theme of SSM changes on a yearly basis. In 2018, the theme was power and choice, and this year’s focuses on advocacy and reclamation.

Ferguson noted that this year’s theme shifts the focus from ways survivors can retain power to ways others can support survivors.

“We’re wanting to highlight the resources on campus, and because sexual assaults are so common, how you, as a friend or as a loved one, can support a survivor,” she explained.

In addition to shifting the focus of the events, the committee chose to expand last year’s Sexual Assault Awareness Week into a month-long series of events. This is only the second year that such a series is being held, and after last year, organizers hoped to build up to Take Back the Night over a longer period of time.

“Last year, having it as a week was kind of overwhelming, just in that it was a lot of events that they wanted to do in a very short time, and now we’re sort of spacing things out a little bit more,” noted committee member Jenna Sneifer ’20. “That was partially to be sensitive to people, because we’re dealing with really heavy topics, and also just so that we could put more in and have more time to plan things and get traction.”

Organizers hope that students who attend the various events will learn how to best support survivors. Merliss, whose work in the SACE Office revolves around planning events that educate the community about interpersonal violence, discussed how sexual misconduct can occur within structured environments like student groups and how student leaders tasked with addressing misconduct often have no guidelines to reference when making decisions.

“If someone comes to you on an interpersonal level with an experience of violence that they want to share with you, how can you react, how can you support that person, how can you point them in the direction of resources that might be able to help them, or tell them about reporting options?” Merliss asked, questions that the committee hopes to answer through SMM events. “Also, when someone has had an experience of violence in a [student] group that they’re in, how do group leaders deal with that? That was something that came up a lot while we were planning, and people were like, ‘I need to know more about this topic,’ so that’s why we decided to have a training that the SACE Office is going to lead.”

In addition to the training held by the SACE Office on April 18, the committee is hosting a documentary screening on April 4; an art gallery on intimate partner violence, co-sponsored by Adolescent Sexual Health Awareness (ASHA), on April 11; Denim Day, an annual international event where people wear denim in symbolic support of survivors, on April 24; and finally Take Back the Night on April 25. Different events are sponsored by the SACE Office, WesWell, and the Sociology Department.

Beyond drawing attention to supporting survivors, organizers hope to expand attendees’ conception of what sexual violence and survivors can look like.

“A lot of what you see in the media is young white women who have experienced interpersonal violence, and that’s just a problem with the media and the #MeToo movement, in a lot of ways,” Sneifer said. “That’s talking about men survivors, people of color, LGBTQ—that’s something we’ve been trying to keep in mind as we’ve been planning this, making sure that we teach people how to recognize and respond to a diverse array of narrative because they’re all out there.”

Merliss noted that students who traditionally come to these events may often already be educated on sexual assault and survivor advocacy, so she hopes that they will be able to reach a broader audience this year.

The committee will be sharing a calendar of the upcoming events with campus in the coming days. Beyond the events the committee is hosting, it will be sharing other events that fall within this year’s SSM themes, like the all-campus Bystander Intervention Training on April 13 and the weekly survivor support group on Wednesdays.

University students interested in working on topics of sexual assault and sexual health year round can look into joining groups like ASHA, Students for Consent and Communication (SFCC), SACE, the Title IX Student Advisory Committee, or WesWell. The SACE Office is also starting a new advisory committee, which just started meeting, but it will be accepting applications for more students to join in the coming academic year.

Organizers hope, above all, for students to come away from SSM events with a better understanding of how survivors can be supported.

“Everyone can be supportive,” Ferguson said. “Sometimes people feel like they need training, or they’re not a professional, so they don’t know how to help someone or just be there, but with supporting a survivor, all you have to do is listen, and say that you care, and that you believe. That’s just the foundation of it all, and anyone can do that.”