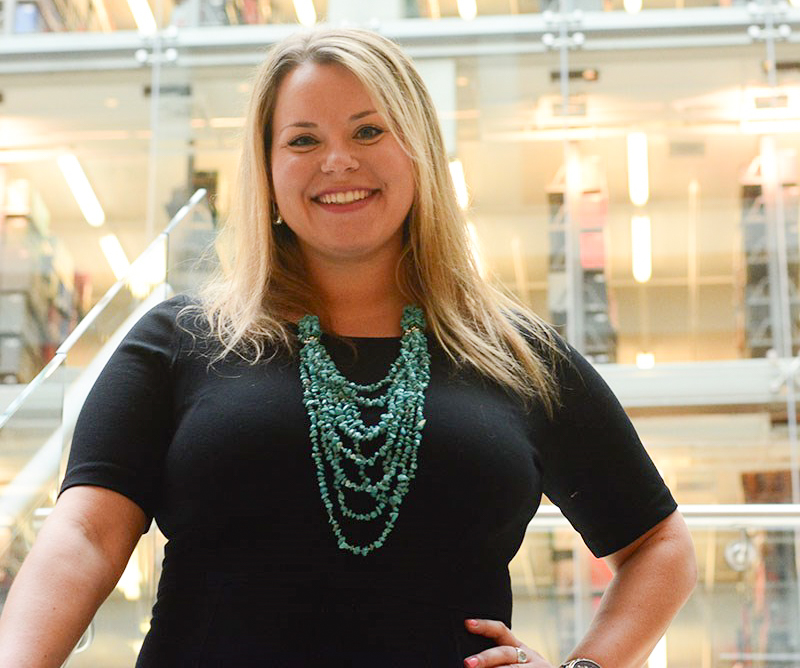 Eleanor Celeste ’10 has long known that public service was her calling. Perhaps it is unsurprising, then, that nearly a decade after her graduation, Celeste is now preparing to hit the road on a book tour, traveling across the country with her co-authors to discuss what it’s like to be a woman in politics and encourage young women to pursue public service. Compiled by Molly Dillon, “Yes She Can: 10 Stories of Hope and Change from Young Female Staffers of the Obama White House,” will be released on Tuesday, March 4, after receiving high acclaim from a range of figures, from Gloria Steinem to Amy Poehler to Elaine Welteroth. The Argus got a chance to speak with Celeste about the upcoming book tour, her work in the White House, and the nature of public service.

The Argus: How was this project organized, and what was the collective writing process like? Was there an effort to find a wide range of stories or construct a larger narrative?

Eleanor Celeste: It was kind of an inkling in the back of Molly Dillon’s, my friend and co-author who kind of brought this whole book together, and my mind. We [wondered] after the election “How do we capture the experience that we had serving in the Obama administration?” [We wanted to] not only make it a story but make it a tool, to show other people that there are these opportunities that we hadn’t even heard of before we got these jobs, as young twenty-something junior staffers in the White House. Molly’s the one who kind of shaped it into this book, and brought this group together. In picking the stories our goal was, one, to kind of give a little insight into what it was like to work at the White House, the real White House, not what you might see on TV. But also a story that kind of says something about service, and says something about overcoming adversity and says something about being a young woman in that role, and how that might have played into it. [We wanted] to open up some avenues to women who might not have seen themselves in those roles before, but through understanding our mistakes, and the fact that it’s hard and no one’s perfect, it becomes okay for them to also want to work in the White House one day.

A: On the first page of your chapter in the book, you chronicle a stressful morning, describing your outfit-picking process. What went into the writing process and the decision to open with this anecdote, when the rest of the chapter doesn’t focus too explicitly on your experience as a woman in the White House?

EC: I think for me, it was about telling an authentic story as a woman more that how I as a woman fit into the White House in a number of ways. [I wanted] to tell the story as a woman would have lived it, and to be honest about that. And so the things you think about are your clothes, and your Uber, and “Oh my god, can I run in those shoes?” Those are the things that often women uniquely, I think, have to think about in a day…. And so in writing, and kind of wanting to emphasize in this book that it’s okay to be a woman in these roles, I wanted to write that authentically as a woman, what other people experience day-to-day and show them that White House staffers experience it too.

A: You mention that you studied biology at Wesleyan and microbiology at Georgetown. How did you end up in law school?

EC: I was a Science in Society [SISP] major, and I had bio and Feminist, Gender, and Sexuality Studies as my two focus points. I’ve always loved the intersection of science and the real world, and I think that has been what I have focused on through each of those different experiences, whether it was SISP—and I was lucky that Wesleyan let me pursue something so interdisciplinary—or in my career when I went back to school to study microbiology and immunology. I was working in a bioethics commission, in an ethics position, and so it was an intersection of those sciences, with the ethics job I had during the day. Ultimately, I went back to law school because I had a number of mentors who were attorneys and I was able to watch a lot of effective attorneys make a difference in policy, and I decided if I wanted to follow that path, I would be most effective with a law degree, and luckily I was right. But it was not an easy decision, and I worked for four years in between to test my hypothesis before I made the dive.

A: Do you think it’s necessary to study something related to policy in order to go into public service?

EC: Absolutely not. I think that being interested, engaged, and committed to something is infinitely more important than studying government, in terms of being an effective advocate in government. And I don’t think that is very transparent today. So yes, that is one of the things I’m definitely saying in this book as we go around, is that you do not have to major in government, or know every president in chronological order in order to be an effective advocate for your issue in the government.

A: What was it like to be a full-time student and staffer at the same time?

EC: It’s something I would never suggest you intentionally pursue. It was the coming together of all the threads in my life, and ultimately I just had to make a decision to do it. And it was difficult. But I think the importance of what I was doing at my job during the day made me laser-focus even more in the evening when I was in law school, because I could see the direct feedback loop from things that I was doing in law school in policies we were working on during the day. One of the classes that I took during that time was on internet policy regulations and although I wasn’t working on that, my office was. And so it kind of reinforced that I had made the right call in finishing law school and accepting the job. When asked to serve in a place like the White House…I wasn’t going to say no.

A: How much of your work in the White House actually required your knowledge of biomedicine?

EC: I was [working] more at the policy level. We would shape what the program would look like, and a lot of those had intersections with biology. And there was a benefit to having that background in biology to understand and underlie the policy piece. [I] was looking at the program level view, or the government level view, or even the inter-agency level view, and so it wasn’t so much “what is this protein doing?” or “how does this virus infiltrate the body?” It was more of the “how do we stop the virus from spreading in the population?” [But] there were topics I covered because I had that background, and I was effective because of that background, and wouldn’t have been able to work on those policies otherwise.

A: You write about working on the Precision Medicine Initiative (PMI). What exactly did the PMI do?

EC: President Obama in 2015, in talking with a number of his advisors, [realized that] we were entering this era of medicine where the advent of human genomics and a deep understanding of causal biology of disease that we were able to [access] from these new methods of testing, and [that] understanding what was happening at the molecular level was going to lead to new treatments. The government wasn’t poised to provide a resource to do that kind of next step of [asking], “How do we understand that there is a gene?” to knowing “How many people have the gene?”, to knowing, “Does that cause a disease in those people or not?” So the goal was to get the right treatment to the right person at the right time. And so one of the big aspects of PMI was building this research program at NIH [National Institute of Health] which has the goal of enrolling over a million people in a single study so by doing that, we can understand what is happening on a sort of macro-level across the country, but then also find little things that are happening in small pockets and maybe understand them better if we have more robust information. So PMI was bringing together kind of the underlying human biology with the data at the right moment in medicine, and the goal was to catalyze that. And it has turned into this incredible program at NIH.

A: So you mentioned that your grandfather was the governor of Ohio, and that your family has always been very politically active. Do you discuss your work with your family, and if so what is that like?

EC: Absolutely. There are some times when I can turn to them and get real world advice because they’ve had these experiences that are really useful, and helpful in those moments. I think other times, though, we can also get in bigger fights than other people, because I might think that something should go differently and that I have a deeper knowledge of a topic than they do, and so we can actually get into a little bit more than other families might. But at the same time, they will always be a resource and have been really helpful.

A: You write about your mother’s struggle with breast cancer during your time in the White House, working on public health issues. What was it like to deal with the emotional aspect of your work while also confronting this issue on a policy level?

EC: It heightened things in a way, and it kind of reinforced the meaning and purpose in what I was doing day-to-day. In a lot of ways it was really nice for me, because it made it okay for me when I wasn’t able to be there, which was hard. Because I knew I was doing something that would help other people like my mom. I also think it put in really stark contrast the different experiences that people can have with the healthcare system, based on their knowledge. A lot of the stories we heard, and that people wrote in letters to us were about [patients] hitting these roadblocks. We even got on the phone with people who’d been through multiple cancer treatments. Mom, because she was a physician and knew what questions to ask, she was able to go in and advocate for herself and get exactly what she needed. She had a really different experience than most of the people I talked to most days. [To have it] put in such stark contrast made me really question what the government could do. [My mom’s] experience was really hard, but she still had the easiest path. So what about all of these other people who don’t have that easy path based on knowledge, and who have to fight, and who often don’t even know what to ask for? So it made me want to work even harder for that subset, because I knew they were out there. We’d heard from them and we’d met them. So it definitely heightened emotions, but it also made me work harder, I think.