Netflix’s “Paddleton” Is More Than Just A Game 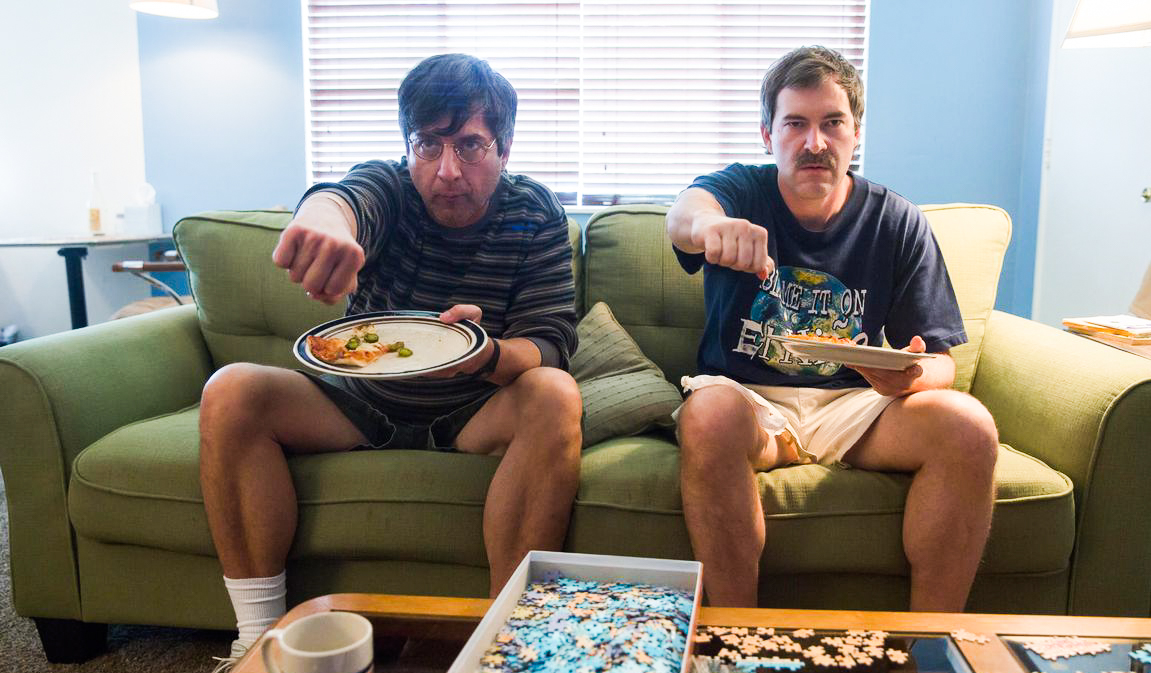 Released on Netflix on Feb. 1, Mark Duplass’ new dark comedy “Paddleton” features a game of the same name that encapsulates the heartwarming friendship between two neighbors Michael and Andy, played by Mark Duplass and Ray Romano.

The two characters play the game in an overgrown field, against a decrepit wall that was once the projector for an abandoned drive-in movie space. This setting for the game evokes a forgotten, bygone era, much like the lives of the two middle-aged men whose best days are behind them. This imagined game they play together is the only remnant left of youthful innocence and childhood serenity.

Paddleton is a variation of paddle tennis. Two players hit a ball against a wall with rackets to try and bounce it into a barrel. It’s not a metaphor. It’s not particularly exciting, nor is it particularly profound. But it’s something to pass the time. And yet, for this very reason, the game perfectly captures the melancholic stage in life where the two middle-aged men have found one another. They both live alone in a duplex in a small, drab town, work banal office jobs, and have fallen into monotonous routines. In one another, though, they’ve found the same kind of emptiness. They spend their time together making pizza, watching kung-fu movies and, of course, playing Paddleton. As the screenwriter Mark Duplass put it in an interview, they’re the kind of guys who’ve given up making eye contact with strangers, or profusely complain if their favorite waiter at the local diner is taking a shift off during their usual time.

Naturally, it’s at the Paddleton courts, in between sets, that Michael tells Andy that his doctors can’t find a way to treat his stomach cancer and he only has a few months left to live. Terminal cancer as a plot device, dropped in the middle or end of movies, can often be an easy way to evoke emotional reactions from an audience. However, “Paddleton” introduces this plot element in the very first scene of the film and while it of course hangs over the rest of the story, the film’s emotional poignancy doesn’t rely on it, and is anything but cheap.

After receiving the diagnosis, Michael decides to kill himself before his condition will inevitably put him through excruciating pain and maniacally expensive medical costs. With no family to take care of him, Andy becomes Michael’s main emotional support as the two cherish their last weeks together. The two take a road trip together to a nearby town to pick up the lethal drugs prescribed for these cases of assisted suicide.

While Michael and Andy would not be very interesting individually as characters, it’s the dynamism of their friendship, built on a shared sense of humor and affinity for bickering, that carries the narrative along. On a road trip, Andy poses an eccentric question to Michael: If he had infinite wishes from a genie in a bottle, how many wishes would it take him before he requested a “Sand-Off” power to instantly rid himself of all sand on his body after going to the beach? Michael says it would be his twelfth-hundred wish because he doesn’t care while Andy says it would be his tenth wish, right behind flying and of course getting rid of Michael’s cancer. Both of them laugh.

The two are perfect contrasts to one another as character types; Michael the laid-back optimist and Andy the pessimistic curmudgeon. In one of the opening scenes, Andy jokes about thinking that he saw a person floating earlier in the day at work and how such a discovery, if true, would horrifically destabilize his scientific worldview. In response, Michael shrugs and says that it wouldn’t really change anything for him, partially to provoke Andy, but in part serious. It’s this glass-half-empty, glass-half-full dichotomy that recurs throughout the film and defines the pair’s friendship.

Visually minimalist and purposefully repetitive in its shot selection, the film relies heavily on naturalistic dialogue to access the psychology of its characters. As the story progresses, it becomes clear that the irony of the film lies in the fact that Andy is actually the existential character afraid of death, even though Michael is the one with a death sentence looming over him. It’s this tension between their different approaches to death that drives the drama of the film. During their roadtrip, once Michael gets the drugs, Andy insists on buying a safe box to lock the drugs in and gets scared that Michael has died whenever he falls asleep. The film eloquently depicts Andy’s neurotic and protective behavior as coping mechanisms to mask his fear of Michael’s impending death.

The humor between the characters often are intended to reveal that something else is going on below the surface that neither know how to express any other way lest they break the unspoken code of their relationship. It’s only at the very end that the two begin to discuss the big questions such as an afterlife, and become emotionally open with one another about the significance of their friendship to one another. In part, it’s for this very reason that “Paddleton” has gotten so much attention, for depicting an emotionally intimate and platonic friendship between two men, a dynamic not always represented on the screen. The film’s brilliance lies in its uncanny ability to visually communicate that which is let unspoken and to evoke the character’s latent affection for one another even when they’re uncomfortable about directly showing it.